If Berniecrats want millions of new voters, they need to win big in state primaries like New York’s September vote 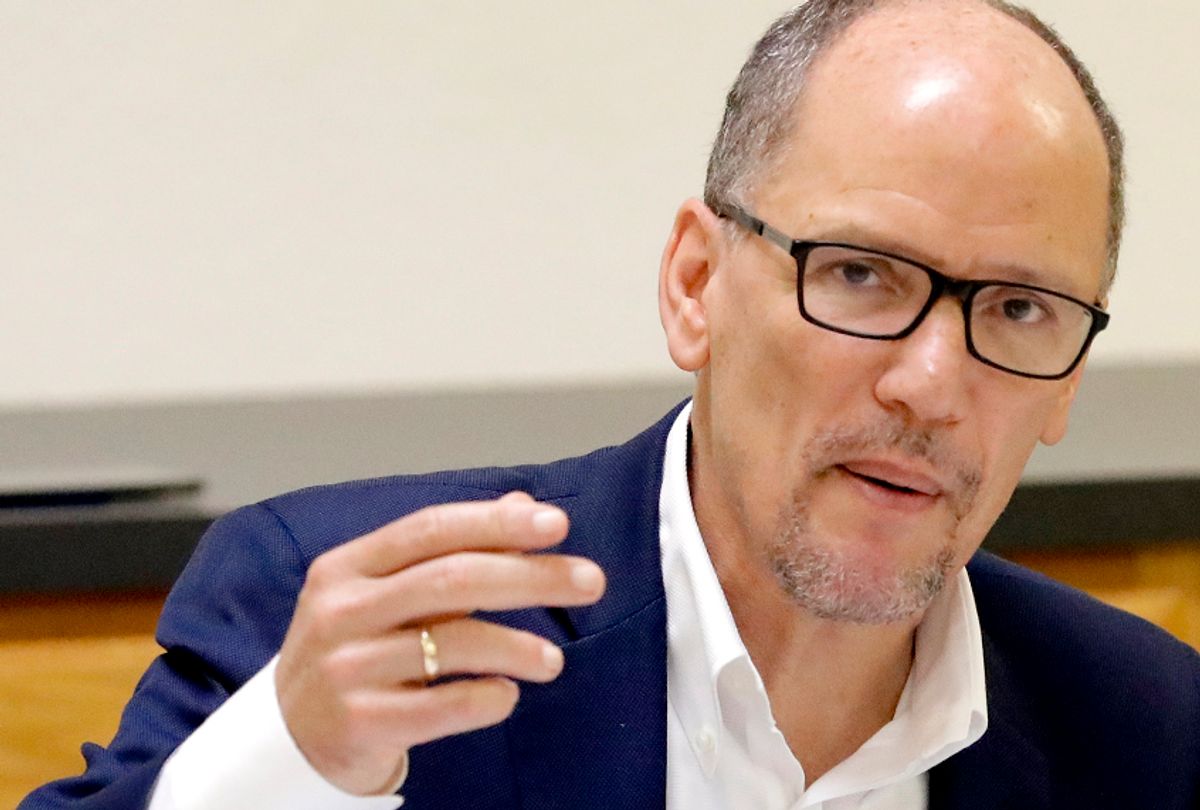 Last Saturday, the Democratic National Committee sanctioned its superdelegates — blocking 716 officeholders, state and local party officials, and other well-connected Democrats from casting a first-round ballot at 2020’s Democratic National Convention toward the 2,383 votes needed to nominate its next presidential candidate.

“We think it’s so important that we return power to the grassroots,” DNC chairman Tom Perez said of the vote on Saturday, although many longtime politicos did not buy that line. They felt they had been tarred and feathered for the crime of consorting with the party for too long — evidenced by their near-unanimous support for Hillary Clinton in 2016 over Bernie Sanders.

“The party has validated (many say incorrectly) that the perception of inherent bias is reality,” wrote Greg Pettis, the mayor pro tem of Cathedral City, California, and DMO Representative to the DNC, in a last-ditch email a day before the DNC vote sanctioned fellow superdelegates. DMO stands for Democratic Municipal Official, which even Perez might admit, qualifies as grassroots.

“Look for ways to expand the table, not reduce the number of seats,” implored Pettis, futilely arguing for a more reasonable remedy. “I’ve yet to hear a discussion of adding 250-300 at large delegates assigned by state to reduce perceived influence. I’ve only heard ‘take away.’ Or I hear ‘get rid of the old guard.’ I may be 61, but I don’t think I’m ready to be put out to pasture.”

The DNC rule changes adopted also included policies to make its presidential nominating contests more participatory and transparent. For caucuses, it urged state parties to allow any eligible voter showing up to register and take part, to allow voting early by an absentee ballot or dropping one off (instead of spending hours at the caucus meeting) and to release the state raw vote totals rather than the mathematical allocation of delegates to the process’s next stage, which isn’t the same as the popular vote count. For primaries, the rule changes urge those states to adopt same-day party registration and voting.

Nonetheless, the Sanders sector was as exuberant as Perez, pronouncing that a grassroots revolution was on America’s doorstep — or, at least, the Democratic Party’s.

It’s “a victory for the political revolution and the people of this country,” crowed Larry Cohen, board chair of Our Revolution, Sanders’ post-2016 national organization, in an email blast (and fundraising appeal). “The sweeping reforms made at this week’s DNC meeting in Chicago also include incentives for same-day registration and party change. That means the millions of people who are prevented every year from participating in Democratic primaries and caucuses will now have their voices heard.”

Democratizing 2020’s nominating process should be the goal, as Pettis suggested. But that’s not exactly what’s happening here. Cohen’s bluster that “millions” of Democrats will now burst through the voting barricades is tenuous.

How exactly are the new DNC rules about to unleash millions of Democrats, especially when the DNC has next to no power to push recalcitrant state legislatures to reform laws governing primaries?

When asked to comment on that point, an Our Revolution spokeswoman said the group has “long advocated” for states to change registration deadlines, for “greater ballot access within the party and [the] fight against threats to voting rights.” After naming its coalition partners — like MoveOn, Progressive Democrats of America, Demand Progress and National Nurses United, she said, “We will continue lobbying to make sure the party implements the reforms passed this weekend.”

What’s missing here is that it’s going to be hard to change state party registration rules by 2020 — the gate through which most voters, including the new millions, would have to pass — unless the midterms overturn red-run legislatures (there are 33 of those nationally) or recalcitrant Democratic bodies become a deeper shade of blue.

Take New York state, supermajority blue and home to the country’s worst party registration deadline. In addition to having to register as a voter 25 days before any election (making it as anti-voter as many red states), residents have to register with a party six months before a primary to vote in it. That deadline is from a state party whose website boasts it is “the longest enduring political party in the world.”

With systemic intransigence like its participatory hurdles, it’s no wonder New York’s Democratic Party has lasted so long. It’s also no mystery why Sanders’ team came to loatheNew York in 2016. The candidate held rallies in the borough of his birth and nearby Manhattan, attracting thousands who could not vote for him — unless they had joined the party no later than October 2015, an unlikely prospect.

There were other slights — such as bureaucratic bungling by the Kings County Board of Elections (i.e., Brooklyn) purging 120,000 legal voters in a Bernie bastion. And that was just one corner of the Empire State. In the capital, Albany, the legislature’s levers of power are in the hands of a cadre of Democrat and Republican allies who are anything but progressive, and ruled with impunity — assisted by centrist Democratic Gov. Andrew Cuomo.

The only hope that Our Revolution has in opening up New York’s primary process depends on unseating that power-hungry cartel. Berniecrats have endorsed progressive challengers to these stubborn state senators in the Sept. 13 primary, hoping to dislodge them. Those upsets, should they occur, could be even more significant than Alexandria Octavio-Cortez unseating Rep. Joseph Crowley this summer in New York’s federal election primary. Elected State Senate progressives could force New York’s Democratic governor to deal with their agenda.

But New York is not the only blue state with obstructive primary laws. Massachusetts’ voter registration deadline is 20 days before Election Day, and for many years elected Democrats running its legislature and state elections have refused to support same-day voter registration. But it at least allows “unaffiliated” voters to participate in party primaries. New York is a closed primary state — which means no one who’s not already a party member can vote. Florida, Pennsylvania and Nevada also have closed primaries. They also have GOP-controlled legislatures, an impediment to voting reform.

This rough road to more inclusive primaries is unacknowledged in Our Revolution’s cheerleading. As Cohen’s email blast said, “They [the DNC rules] will end the tactics of voter suppression in states like New York — governed by Democrats — that set their party registration deadlines six months in advance of their primaries. Millions more people will be permitted to vote in Democratic caucuses and primaries thanks to your help.”

The dozen states that hold presidential caucuses are another category. These states are in the Plains and mountain West, where Sanders largely beat Clinton — with voters strongly backing Trump in the fall. But they are not the states that swing presidential elections, and one of the biggest, Washington, will only be holding primaries in 2020.

How will millions more get to participate in 2020’s Democratic nominating contests? That road is through reforming laws governing primaries, not caucuses. Election experts agree, saying the impact of the new DNC rules, apart from the superdelegate issues, would most likely be on more easily managed caucuses — or would be symbolic.

“The main impact is that caucuses, which are completely controlled by the party and not the government, are going to have to have provisions for absentee voting,” said Richard Winger, editor of Ballot Access News. However, opening up Democratic caucuses in states like Nebraska is not the same as reforming New York’s party registration deadline — which he said was “facing a lot of pressure.”

The new rules were akin to getting a plank inserted in the party platform, said Wendy Underhill, a National Conference of State Legislatures elections analyst.

“A parallel here would be when the party adopts a platform with a bunch of planks, that doesn’t make those planks come into being” as laws, she said. “It ostensibly provides a blueprint for people of that party to go forward with policy. ... What you’re looking at here would be parallel to that.”

Underhill said there were many ways to open up the state-run primary process without tearing it apart completely. She said the longest registration deadlines can be sizably reduced, so the public’s last-minute impulses to vote can be accommodated.

“There are ways to just make it 14 days instead of 25 days, or even seven days,” she said, referring to New York’s voter registration deadline. “In a sense, it’s a continuum from 30 days; that’s as far out as any state can be. So I can imagine some states adopting a closer-in deadline, with the theory that they might be able to use technology (37 states have online registration) to confirm that those people are eligible voters.”

Some Our Revolution leaders acknowledge that opening up Democratic presidential primaries is a longer-haul effort, but say it is one within their sights.

John Zogby, a DNC member for nearly three decades and an Our Revolution board member, who recently served on the DNC’s Unity Reform Commission — whose report led to the just-adopted rule changes — said the new DNC rules were “aspirational” when it came to primaries. But he also hopes the 2018 midterm season would start to change the legislative landscape in stubborn blue states like New York.

“It is aspirational ...  you are limited by the policies that the state puts in place,” Zogby said, adding that Our Revolution has endorsed a slate of state Senate candidates in New York’s Sept. 13 state primary. “If you have a truly Democratic state Senate, you could get a lot done that has been blocked. If that changes, then a lot can change.”

Zogby said the DNC rule changes — on superdelegates, primaries and caucuses — and its pledge to keep debating financial transparency and budgeting policies were significant. He said Our Revolution would push the state parties to open up their nominating process, especially if the GOP lost state legislative majorities after November.

“We are committed to taking these reforms, particularly on voter registration and the delegate selection rules that are in place for the convention, and lobbying for them in between now and 2020,” Zogby said. “Some people might say, ‘You’ve finished it all now. Now it’s done.’ No, I think it’s just starting.”