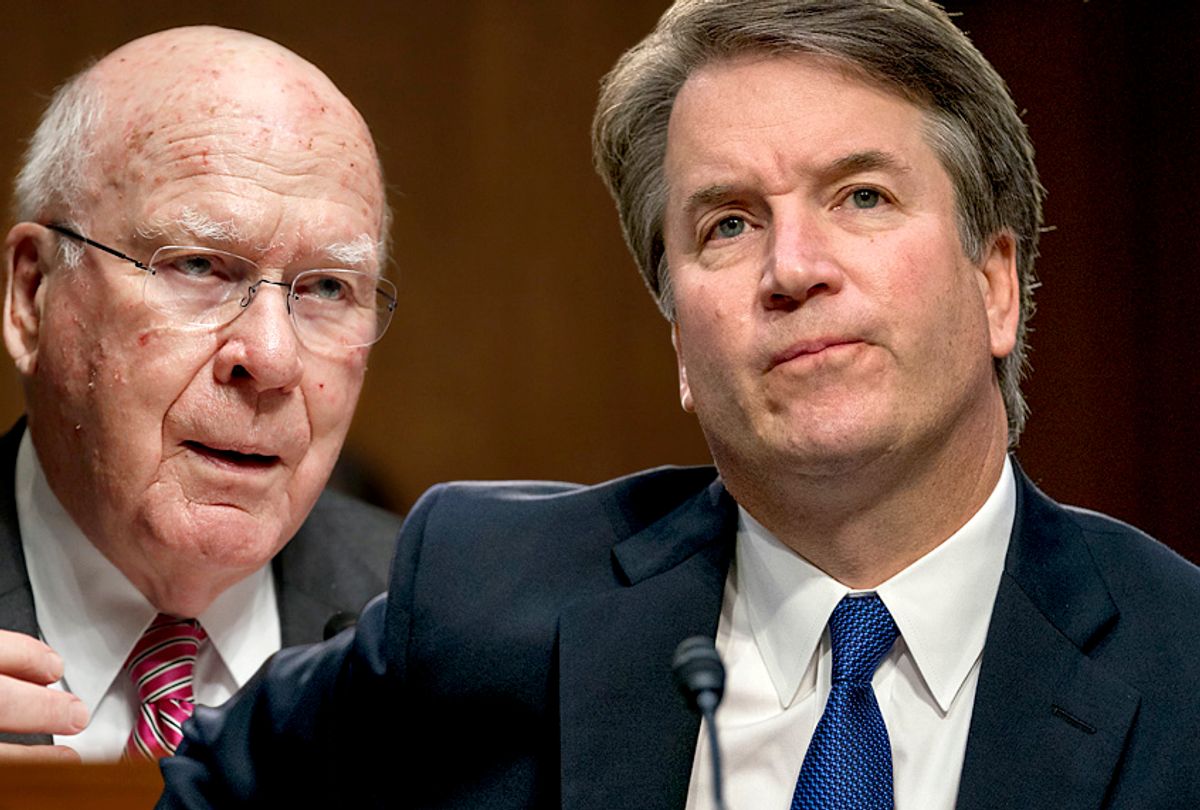 "What is being hidden and why?" demanded Sen. Patrick Leahy, a Democrat from Vermont, during Tuesday morning's opening remarks at confirmation hearings for Brett Kavanaugh, Donald Trump's nominee to replace Anthony Kennedy on the Supreme Court.

Going into Kavanaugh's hearing, activists and left-leaning pundits expressed deep concerns, for good reasons, that Senate Democrats aren't doing enough to stop Kavanaugh from being seated. The mainstream press is treating Kavanaugh's confirmation like a done deal, but Republicans only have 50 votes in the Senate (at least until former Sen. Jon Kyl is sworn in as John McCain's replacement), hardly the surefooted majority that some perceive. If all Democrats plus the two independents vote against him, it would only take one Republican defector to sink the ship -- Sen. Susan Collins of Maine, Sen. Lisa Murkowski of Alaska or someone else.

Kavanaugh has historically low approval ratings for a Supreme Court pick, and his nomination is clouded by serious legitimacy concerns. That's true both because President Trump is the focus of an investigation that has resulted in several numerous guilty pleas and convictions among his associates, and because there has still been no accounting for the way Senate Republicans outright stole a Supreme Court nomination from Barack Obama.

Democrats came out swinging Tuesday morning. For two hours, the minority members on the Senate Judiciary Committee kept raising objections and demanding adjournment, on the grounds that Republicans have gone out of their way to conceal what Democrats said amounted to 90 percent of Kavanaugh's records from his time government service. The Trump administration is even citing "executive privilege" to shield 100,000 pages of Kavanaugh documents from the George W. Bush years.

Kavanaugh, cut off from his efforts to introduce himself with folksy remarks about his family, sat dumbly while protesters screamed at the committee (and while the room slowly emptied as they were dragged off) and Democrats insisted, repeatedly and at great length, that the hearings be adjourned.

While committee chair Sen. Chuck Grassley, R-Iowa, kept arguing that there were plenty of Kavanaugh's papers for senators to read, Democrats kept making the point, over and over again: They don't just want whatever portion of the nominee's paperwork has been approved by the administration. They want all of it.

Most importantly, what are Republicans hiding?

No doubt this lengthy and highly dramatic delay will be portrayed in the mainstream media, always fearful of looking "biased," as little more than a political stunt. And certainly, the Democrats on this committee, some of them eyeing a potential presidential run in 2020, were looking for opportunities to grandstand. But what became clear, watching Grassley get increasingly incensed as Democrats kept insisting that the hearing was a farce without the full documentation, was that there's real substance to the Democratic concerns.

This isn't just political theater conducted for the C-SPAN cameras. Grassley, who came equipped with multiple written remarks deflecting criticism about the lack of transparency about Kavanaugh's record — particularly from the judge's time working in the Bush White House — really does not want those documents to come out. So much so that Grassley repeatedly threatened to keep the Senate working through the weekend to get Kavanaugh confirmed. His anxiety about getting this done before there's a chance for that information to get out was palpable.

"Well, any journalist would ask, 'What are you hiding? Why don't you want a full accounting of this nominee?'" journalist Irin Carmon said on CNN in the run-up to the hearing.

After the fireworks that followed in the hearing room, it seems that the answer must be that they're hiding something really bad. Something so damaging that it might shake the sense of inevitability that has lingered over this nomination since it was first announced. Whatever it is, it must be bad enough that Republicans would rather get called out for their obvious efforts to hide Kavanaugh's record rather than simply release it.

It's genuinely hard to imagine what that could be. These are the same Republicans who unconstitutionally held open the Supreme Court seat held by the Antonin Scalia rather than allow Barack Obama to have confirmation hearings for Merrick Garland, his legitimate nominee. This is an era when the sitting president is on tape bragging about groping women and admitting he fired the FBI director to obstruct an investigation into his own personal role in criminal theft in service of Russian espionage. Republicans have shamelessly covered up for Trump in a dizzying number of scandals, many of them involving allegations of criminal behavior. This history suggests they hope to get Kavanaugh seated on the Supreme Court in no small part because they believe his record shows he will continue to shield Trump from any accountability for illegal behavior.

Republicans, in other words, are customarily shameless, and have been working to secure a hyper-conservative majority on the Supreme Court for more than three decades. What could possibly be in Kavanaugh's records that is so troubling that it could rattle Republican determination to get him seated quickly? If it were otherwise, it would seem Republicans could just release the documents and rely on the Fox News spin machine, along with Trump's Twitter feed, to bewilder the media and create repeated distractions, as has occurred with so many other scandals coughed up by the Trump administration.

It's always possible, of course, that Grassley is simply being imperious and helping to conceal Kavanaugh's government records just because he can. But odds are that this is exactly what it looks like, which is that Republicans are so worried enough about whatever is in those records that they are willing to be seen hiding them rather than come clean. Perhaps this Democratic grandstanding will do more than bolster their 2020 fundraising efforts, but will compel the public to ask exactly what it is that Republicans don't want them to know.