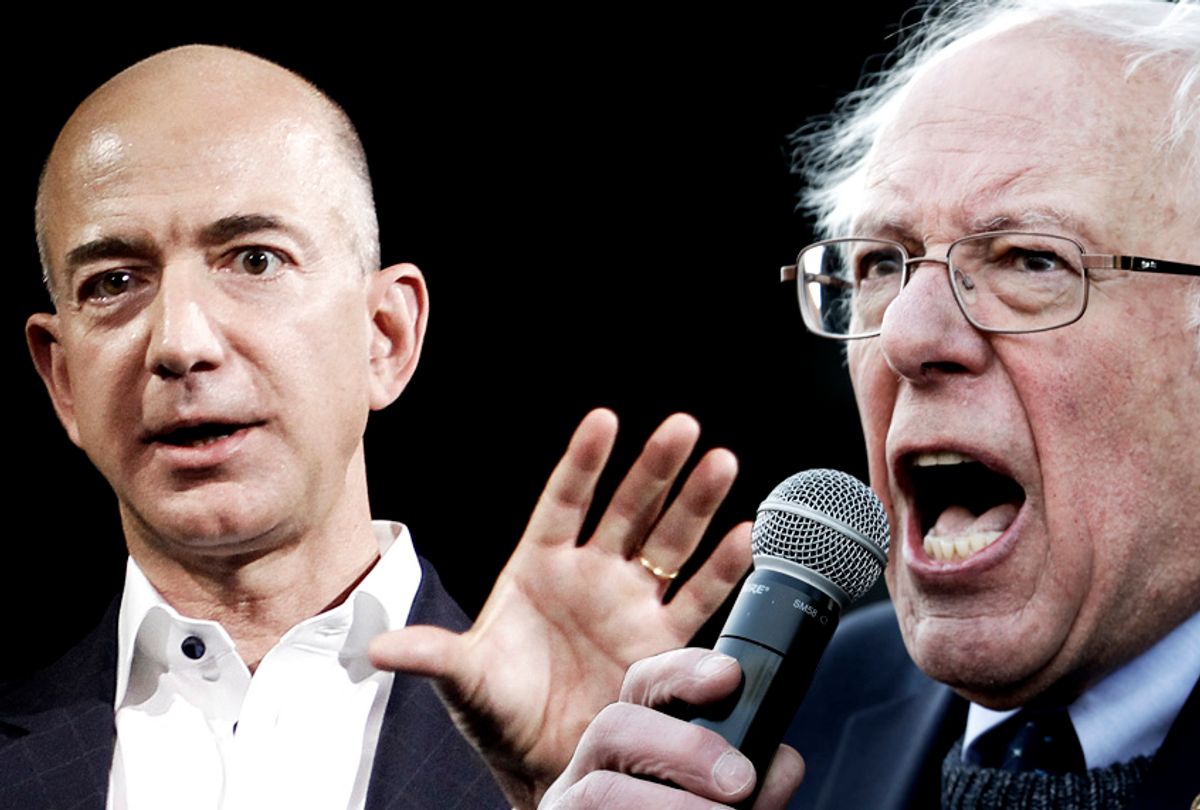 It's no secret that Sen. Bernie Sanders, I-Vt., doesn't like the way Amazon CEO Jeff Bezos runs his business. And it is likely no coincidence that Sanders and Rep. Ro Khanna, D-Calif., teamed up and introduced legislation this week in his honor: the Stop BEZOS Act (BEZOS being an admittedly forced acronym for "Bad Employers by Zeroing Out Subsidies").

The proposed bill would levy a tax on big corporations, like Amazon, equivalent to the value of the public benefits that their workers receive. To put that in perspective, Amazon would be taxed $1,000 to cover the cost of an Amazon worker receiving $1,000 in food stamps.

"Our legislation gives large, profitable employers a choice: Pay workers a living wage or pay for the public assistance programs their low-wage employees are forced to depend upon," Sanders said during the announcement of the bill.

Over the last couple months, Sanders has zeroed in on the income disparity between Bezos and his workers, specifically those who work in Amazon warehouses and fulfillment centers, in addition to drawing attention to how workers at Walmart and Disney are treated. Indeed, Sanders’ campaign seeks to address a bigger issue in America at the moment: what some have called the disappearance of the middle class due to unlivable wages.

Sanders said in his announcement this week that Bezos and Amazon could play a “profound role” in how big corporations pay their workers in America, especially since the company is doing well. Earlier this week, Amazon was valued at more than $1 trillion.

Some disagree with the bill though. Jared Bernstein, a senior fellow at the Center on Budget and Policy Priorities and former chief economist for Vice President Joe Biden, said on Twitter he fears such a bill would incentivize employers to practice "statistical discrimination" by avoiding employees they think might be eligible for benefits.

Bezos is the richest man in the world. His net worth is an estimated $163.5 billion, yet some of his employers in warehouse facilities and fulfillment centers are paid below a living wage.

In January 2018, Salon spoke with Brenda Hardin, who works part-time at an Amazon fulfillment center in Kenosha, Wisconsin. She told Salon she makes $12.75 an hour, but does not receive benefits — with the exception of the $9.62 that Amazon pays toward her health insurance each week.

“This is the most prestigious company in the world, and for part-time workers, it’s like a modern slave shop,” she said.

Amazon has publicly condemned Sanders’ campaign. In late August, the company released a statement saying they have been “in regular contact with his office and have offered several opportunities for Senator Sanders and his team to tour one of our fulfillment centers (FCs).”

“Senator Sanders’ references to SNAP, which hasn’t been called 'food stamps' for several years, are also misleading because they include people who only worked for Amazon for a short period of time and/or chose to work part-time — both of these groups would almost certainly qualify for SNAP,” the statement said.

In February, the Economic Policy Institute (EPI), an American think-tank that examines the economic impact of policies and proposals, found in a report that counties that have Amazon fulfillment centers don't observe a boost in the local economy, as Amazon has promised. The report also found that at the end of 2016, Amazon had received an estimated $1 billion in state and local subsidies for its fulfillment warehouses. This appears to be another motivator behind the Stop BEZOS campaign.

"In other words, the taxpayers of this country would no longer be subsidizing the wealthiest people in this country who are paying their workers inadequate wages," Sanders said while announcing the bill. "Despite low unemployment, we end up having tens of millions of Americans working at wages that are just so low that they can't adequately take care of their families."