Michael Moore's terrifying "Fahrenheit 11/9": Trump is the symptom, not the disease 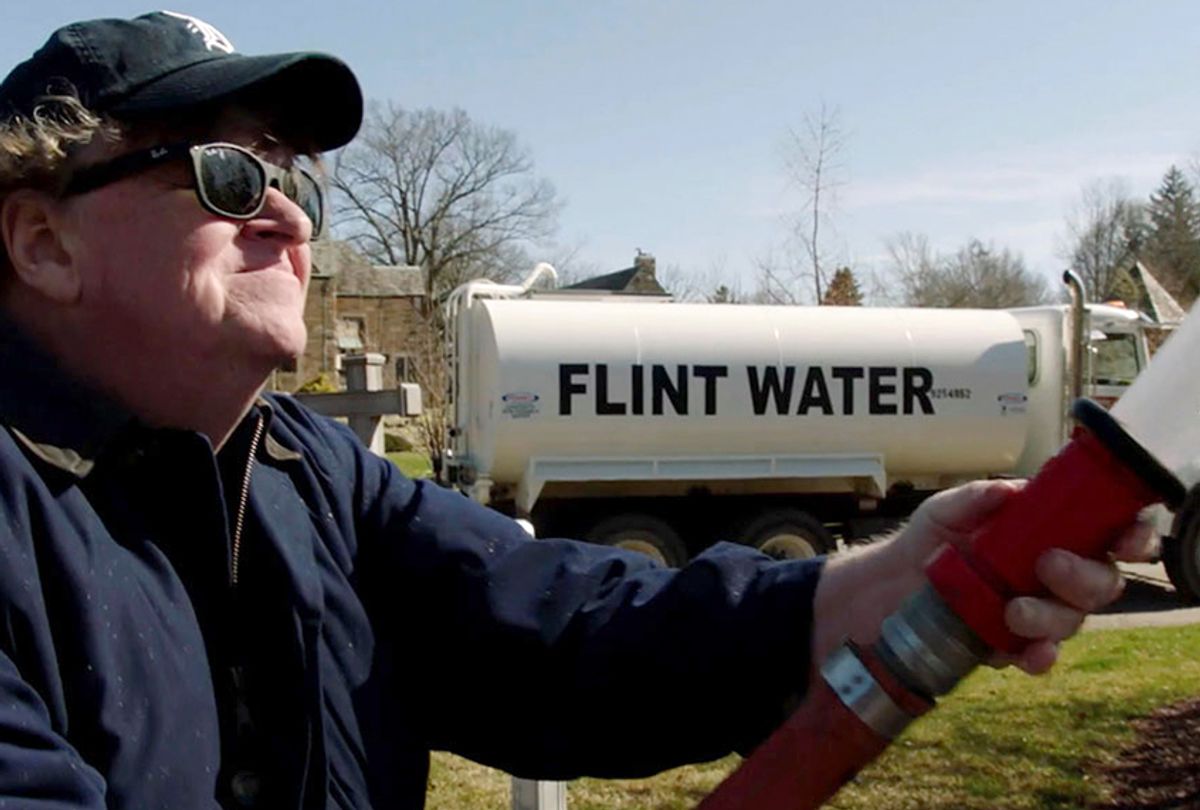 Michael Moore’s new film “Fahrenheit 11/9” begins in Philadelphia on November 7, 2016 — election eve. Images flash of euphoric Hillary Clinton supporters, expecting to see their candidate formally declared President. Then we see clips of various politicians and celebrities, who all smugly claim that Donald Trump is never going to win. It’s a brilliant open to a cautionary tale. Rather than start with a focus on Trump, Moore opens by focusing on a deluded public who couldn’t see what was coming.

Moore has always been a master at offering audiences documentaries that are provocative, insightful, revelatory and witty. But that’s never been all there is to it. Moore’s movies are not simply intellectual endeavors. This has been true since his first film “Roger and Me” (1989), which exposed the economic impact of GM’s decision to close plants in Michigan. And it remained true with films like “Bowling for Columbine” (2002), which went after the NRA and won Moore an Academy Award. Then he released “Fahrenheit 9/11” (2004), which broke box office records and offered a sharp, critical view of the George W. Bush administration’s War on Terror in the wake of the attacks of 9/11/2001.

“Fahrenheit 11/9” draws on this rich legacy to offer viewers Moore’s most powerful movie yet. The film uses the story of the rise of Trump to document the failures, weaknesses and flaws in our democracy. For Moore, the story of Trump is not a story about a momentary breakdown in a system that allowed a dangerous, narcissist to come to power; it is a story about a system that has been careening towards this outcome for decades.

In characteristic Moore style, the film offers a lot of juicy Trump insights, including the claim that Trump decided to run because he was jealous of the fact that Gwen Stefani was earning more money than him at NBC. Ultimately, though, Moore refuses to give Trump too much screen time. “Yes, I will show you some stuff about Trump that you haven't seen,” Moore told Hollywood Reporter, “but if you're coming to see the pee tape, you're going to the wrong movie."

If you were looking for an easy out of the Trump era, like impeachment, this isn’t the movie for you either. But, if you are looking for a movie that reveals the complex web of political manipulation, abuses of power and institutional failures that made Trump possible, then this film is must-see.

From the opening moments of the film Moore makes it clear that Trump is the symptom, not the disease. What makes Trump especially frightening, though, as Moore makes clear, is that he is not like the rest of the ruling class. Rather than hide his abuses of power in the shadows, he takes the limelight. And, rather than try to repress his megalomania, Trump basks in it. Even more, Trump is a master at manipulating the media and controlling the narrative.

But most importantly Trump doesn’t believe that any rules apply to him and he is obsessed with holding absolute power. This is why the title of the film references Moore’s earlier work in “Fahrenheit 9/11” — the message is that if the Bush administration’s response to 9/11 distressed you, then you should be truly terrified by what a Trump administration might make of a similar event.

To make the point clear, Moore goes back to the time that he appeared alongside Trump on Roseanne Barr's "The Roseanne Show" in 1998. Moore’s “Roger and Me” came out in 1989 not long after Trump’s “Art of the Deal” (1987).  They both clearly represented radically different views about capitalism. So when Trump saw Moore, he had good reason to think Moore might go after him and he threatened to cancel the interview. In damage control, Barr’s team asked Moore to play nice with Trump and he conceded. Looking back on that moment, Moore reflects on the fact that Trump played him that day, that he got what he wanted from him.  At the time, Moore had a reputation as someone who would bravely go after corporate corruption and abuses of power.  Yet, as they prepped Moore for the Barr show, he was convinced to roll over for Trump.  It was through that experience that Moore learned not to underestimate Trump—a lesson he repeated all through the election cycle as one of the lone voices who predicted Trump’s win.

As Moore looks back on Trump’s rise to power he offers his audience lots of sharp, witty, satirical irony, but ultimately Moore’s point is that Trump may be a joke, but there’s nothing funny about him. As if to drive home the point, this is Moore’s most chilling, least-lighthearted film yet. Sure, he breaks up the tension with scenes like the one where he posits that Stefani is the reason Trump decided to run, but these moments are flashes in a film that draws serious and detailed comparisons between the Trump administration and Nazi Germany.

At the heart of the film is the message that abusive systems of power depend on a public that is complacent, compromising, passive and distracted. In order to draw out how we came to be a nation where so few people vote and even fewer feel like their voices matter, Moore takes aim across the political spectrum. One of the most powerful aspects of the film is the way that Moore pulls no punches as he outs the establishment left and faults them for their complicity with corporate capital. Nancy Pelosi, Bill Clinton and Barack Obama all come under fire as Moore reveals how they sold out the ideals of the Democratic Party to corporate backers.

He even implicates himself, not only for his soft pedaling of Trump during the Barr interview, but also for the various times that his own career has brushed up against the corrupt power elite in ways that feel altogether too chummy to him in hindsight. He even reveals that Jared Kushner hosted the after-party for the premiere of “Sicko” (2007), his documentary about the failures in our healthcare system.

One of the most moving elements of the film is the way that Moore tells the story of the water crisis in his hometown of Flint, Michigan and turns this personal and local tragedy into a warning for the nation as a whole. Moore documents how Michigan’s Governor Rick Snyder put profit over the people of Flint when he replaced their clean water source with one that was contaminated with lead. The film offers chilling details of how the Snyder administration knowingly poisoned an entire city.

Moore makes the case that the story of Flint is not one of isolated corruption and greed; it is a story of a nation that has allowed this sort of criminal behavior to be more than acceptable, but routine. With scenes that connect Snyder and Trump, Moore shows how a willful disregard for human life and total abandonment of any moral code are now common political practice. Moore works hard to drive home the point that the story of Flint is not an isolated incident or a tragic accident, but proof of the triumph of corporate capitalism over democratic ideals.

As Moore moves across the country covering stories of families that have been left behind by a system designed to benefit the oligarchy, Moore also documents a rising resistance. From the teachers’ strike in West Virginia to the teenage students of Parkland, Florida, who organized the “March for Our Lives,” to various young, progressive politicians, like Alexandria Ocasio-Cortez, Rashida Tlaib, and Michael Hepburn, Moore reminds us that what we need isn’t hope; it’s action.  Never one to leave his audience in despair, Moore offers his viewers a path to resistance. He makes it clear, though, that the only way that resistance will make a difference is if everyone who is frustrated with the system gets involved.

It’s not unusual to describe a creative triumph as a “tour de force.” But in this case the phrase, which stems from the French for “feat of strength”, is especially apt. This film really is Moore’s tour de force — a forceful, moving, and compelling call to action.   A number of Michael Moore’s films have made history. This time he’s asking his audience to be the ones to do it.

“Fahrenheit 11/9” premiered on September 6 at the Toronto Film Festival. It opens nationwide on September 21.