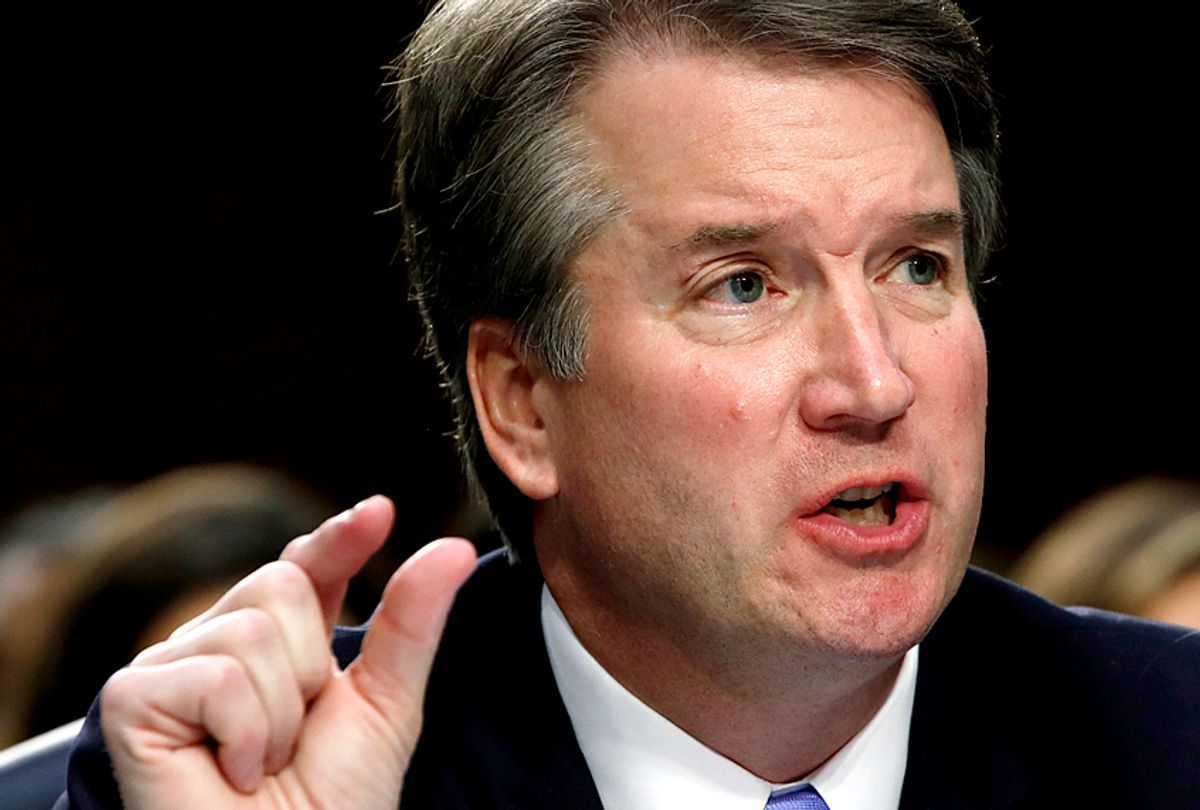 On the third day of his hearing, President Donald Trump's Supreme Court nominee Brett Kavanaugh added fire to the fuel regarding his apparent view on women’s reproductive rights in just one answer. Indeed, he described birth control as “abortion-inducing drugs" — rhetoric that is often enunciated by those in support of the pro-life movement.

The comment came as a response to a question asked by Sen. Ted Cruz (R-Tex.) about his dissenting opinion in the 2015 case Priests for Life v. HHS. At the time, employers were mandated to include contraception coverage in employee health plans, according to the federal health care law. The Trump administration is trying to roll back that Affordable Care Act requirement.

Kavanaugh sided with the religious organization who was opposed to providing employees with insurance coverage for contraceptives. “They said filling out the form would make them complicit in the provision of the abortion-inducing drugs that they were, as a religious matter, objecting to,” Kavanaugh testified.

While it is unclear which contraceptive methods Kavanaugh was exactly referring to, Priests for Life was specifically opposed to any contraceptives — except when used for non-contraceptive purposes.

“Kavanaugh referred to birth control — something more than 95 percent of women use in their lifetime — as an ‘abortion-inducing drug,’ which is not just flat-out wrong, but is anti-woman, anti-science propaganda,” Dawn Laguens, executive vice president of Planned Parenthood Action Fund, said in an emailed statement to Salon. “Women have every reason to believe their health and their lives are at stake.”

In July, Priests for Life applauded Kavanaugh’s nomination when it was announced. “We at Priests for Life have personal experience of Judge Kavanaugh’s approach to religious freedom, because he sided with us when we had to defend our religious freedom in the D.C. Circuit Court of Appeals,” Fr. Frank Pavone, the organization’s national director, said.

“We urge the Senate to conduct a swift and fair confirmation process," he continued, "focused on the excellent qualifications of Judge Kavanaugh — and not on the politics of personal destruction that the Democrat left are such experts at carrying out.”

Prior to Kavanaugh’s comment on Thursday, he had essentially dodged all questions regarding Roe V. Wade, but his record paints a clear picture, according to Laguens.

“Kavanaugh has made clear over and over again that he would not uphold women’s ability to access reproductive health care as a constitutional right,” Laguens added. “Let me break it down for you, Brett: Birth control is basic health care. Birth control allows women to plan their futures, participate in the economy, and — for some women with health issues like endometriosis — allows them to get through the day. It is clear from Kavanaugh’s record and answers that his nomination puts access to affordable birth control at risk.”

The Center For Reproductive Rights told Salon in a statement that Kavanaugh’s pro-life discourse has been disconcerting, and it has not only specific to this Thursday’s comment.

"Troublingly, Judge Kavanaugh also used the term 'abortion-inducing drugs' to describe contraceptives in his testimony about a case challenging the ACA’s contraceptive coverage accommodation," Nancy Northup, president and CEO of the Center for Reproductive Rights, told Salon in an emailed statement. "Moreover, this is not the only phrase commonly used by anti-choice activists that Judge Kavanaugh has also used. In his dissent in the Garza case, he used the anti-abortion 'dog whistle' phrase 'abortion on demand' three times. Judge Kavanaugh’s dissenting opinions in these cases and his use of these anti-choice phrases demonstrates the threat his confirmation represents to women’s access to contraception and abortion."