Despite their protected status, wild horse herds have long been regarded as a nuisance by ranchers 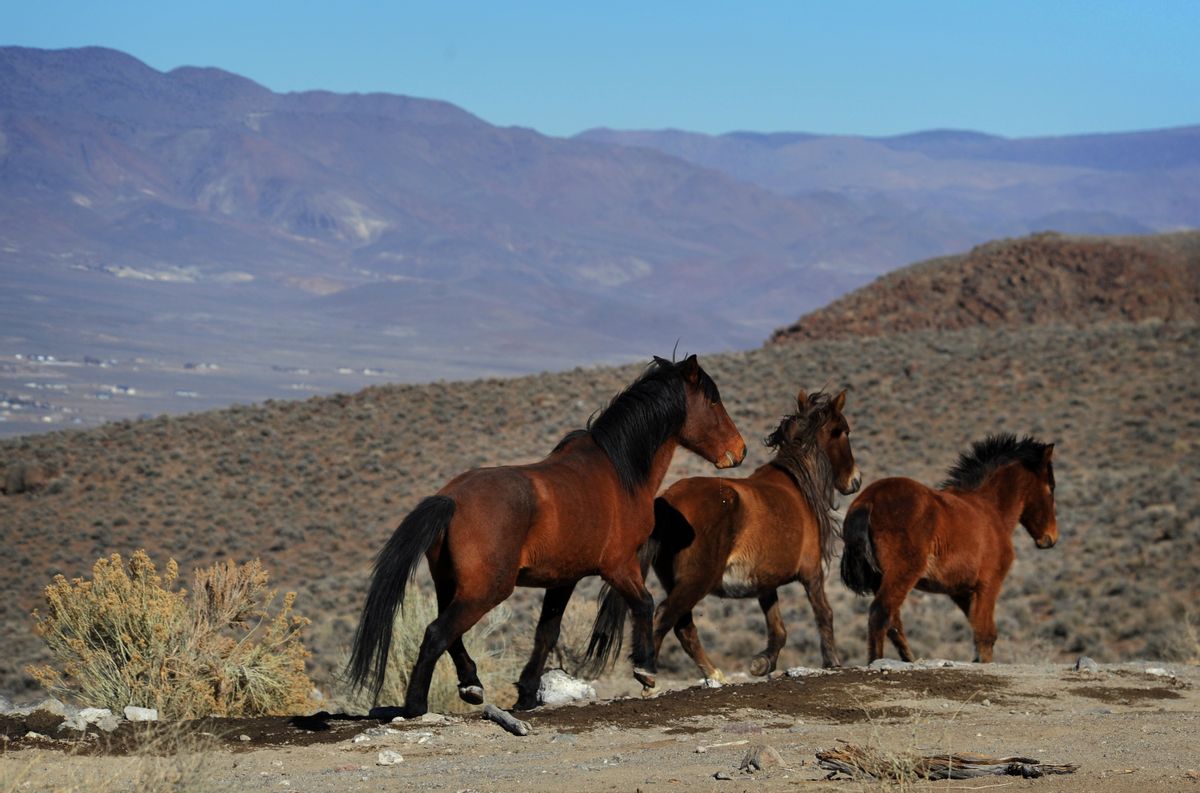 In this Jan. 23, 2015, photo, wild horses are seen during a BLM tour in the Pine Nut Mountains just outside of Dayton, Nev. Under the threat of another legal battle, the U.S. Bureau of Land Management has quietly pulled the plug on a public-private partnership in northern Nevada aimed at shrinking the size of a wild horse herd through the use of contraceptives, according to documents The Associated Press obtained on Tuesday, May 10, 2016. (Jason Bean/The Reno Gazette-Journal via AP) NO SALES; NEVADA APPEAL OUT; SOUTH RENO WEEKLY OUT; MANDATORY CREDIT (AP)
--

Wild horses have long been an evocative symbol of the American West. When wild horses and burros were threatened with extinction nearly 50 years ago, Congress rode to the rescue with a law providing broad protections.

Horse numbers have soared, however, along with government costs to manage the herds. And the animals increasingly compete with privately owned livestock for food and water on public lands — a conflict worsened by climate change. There is broad agreement that something has to give.

Even so, animal welfare groups have bristled at measures taken and being considered by the Bureau of Land Management, the branch of the Interior Department that oversees an immense swath of western public lands. The bureau recently eased limits on sales of captured horses to private parties, raising fears about the animals possibly being funneled to slaughterhouses to become food for pets and people. And although the BLM is currently barred from killing horses to control their numbers, the agency raised euthanasia as an option in a recent report to Congress.

Wildlife advocates instead are pushing measures they see as more humane, such as expanding an existing contraception program, reducing acreage available for grazing and mining and allowing more wild horses on public lands.

The clash comes amid aggressive efforts by the Trump administration to tilt public lands policies in favor of private interests, such as ranchers, mining companies and oil and gas drillers. Administration officials are seeking sweeping changes to the Endangered Species Act, have significantly downsized two national monuments in Utah — the Bears Ears and Grand Staircase-Escalante national monuments — and are considering reductions in several others. They also want to roll back rules to limit methane gas emissions from oil and gas drilling on public lands.

Based on that pattern, “I really believe wild horses get in the way of a larger effort, which is to eventually privatize public lands,” said Ginger Kathrens, a cinematographer and a member of the National Wild Horse and Burro Advisory Board.

The BLM brushed aside claims that it is willing to jeopardize the animals to benefit private interests. In a statement, the agency said it “continues to evaluate options for managing wild horses and burros, including forging effective partnerships with public and private organizations to train and place wild horses and burros into private care through adoptions and sales. We are always interested in hearing suggestions on ways to provide good, permanent homes for excess horses.”

Despite their protected status, wild horse herds have long been regarded as a nuisance by ranchers. In the 1950s and 1960s, they were headed toward extinction due to so many being shipped to slaughterhouses. Appalled, Velma Bronn Johnston, a Nevada secretary nicknamed “Wild Horse Annie,” spearheaded a campaign to save the animals, culminating in the 1971 Wild Free-Roaming Horse and Burro Act.

Though a limit was originally set at nearly 27,000 wild horses and burros, it hasn’t been enforced. As of March, according to the BLM, there were almost 82,000 roaming free. Meanwhile, over the years the government has reduced the areas available to the horses by more than 40 percent, due to court rulings and to protect habitat, among other reasons. Further reductionshave been proposed.

The government already has rounded up 45,320 of the animals, holding them in corrals and pastures, many privately owned, at an annual cost of $48 million. These roundups, frequently done with helicopters, also are controversial, as they can lead to horse injuries and deaths.

While it is illegal to dispatch the animals to slaughterhouses, the BLM conducts sales and adoptions, and transfers horses to state or federal agencies as work horses. In addition, the BLM uses contraceptives to control horse numbers, though critics want to expand this effort as a way to avoid more draconian steps. All told, the BLM measures so far have not put a serious dent in the wild horse population.

The pressures were reflected in BLM’s April report to Congress, which cited wild horse overpopulation as having a “devastating” impact on rangelands. Ethan Lane, executive director of the ranchers group Public Lands Council, called the wild horse situation an “animal welfare crisis” that the BLM is trying to manage.

Lane also credited ranchers with supporting the ecosystems in areas “starved” for water and vegetation by investing time and money in the land, and by practices like livestock rotation.

But advocates such as Laura Leigh, president of Wild Horse Education, say overgrazing by livestock is mostly to blame for rangeland destruction. These advocates note that cattle and sheep far outnumber wild horses and are allowed on nearly six times as much public land. Their argument is backed up by a 2016 Government Accountability Office report that found that federal field staffers have underreported unauthorized livestock grazing.

Leigh’s view is similar. “Unless we address the larger problems, livestock and mining, efforts like fertility control or roundups will never fix anything,” she said.

Nevertheless, many ranchers and some experts are calling for the government to move swiftly to thin the herds. “We’re running out of time,” said Terry Messmer, director of Utah State University’s Berryman Institute, which publishes a scientific journal called Human-Wildlife Interactions. Because of the proliferating numbers — herds can double in size within four to five years — a quick fix is needed, and options like slaughter should at least be considered, Messmer said.

Yet because of opposition to killing wild horses — a 2017 Public Policy Poll commissioned by the American Wild Horse Campaign found that 80 percent of the public is against it — the BLM is trying other measures. In May, the bureau increased from four to 25 the number of horses that can be sold to private parties without special approval. Some advocates say it’s near certain that some of the animals will be shipped to slaughterhouses.

A BLM spokesman said the agency takes steps to prevent this, including carefully screening buyers and requiring them to sign contracts pledging that horses aren’t being obtained for slaughter. But aside from operating a telephone hotline and offering an email address for people to provide tips about possible violations, the BLM doesn’t track wild horses once sold. In 2012, the investigative news organization ProPublica reported on a livestock hauler who, federal investigators later confirmed, sold 1,700 wild horses acquired through the BLM for slaughter.

The agency also is considering chemically or surgically sterilizing wild mares. The BLM tried, but abandoned that approach in 2016 amid a public outcry. Critics say use of the invasive procedure in unsterile environments on the range could lead to widespread horse deaths.

Another idea is transferring more wild horses abroad. The agency is considering a pilot program to ship up to 49 horses to a ranch in the South American nation of Guyana to establish a herd for use by indigenous populations. The mover behind the project is Stan Brock, an octogenarian philanthropist who hopes eventually to bring as many as 2,000 horses to Guyana. In an interview with FairWarning, Brock said he will personally ensure they won’t be sold for meat. But because the BLM has no jurisdiction abroad, wild horse advocates fear for horses sent to other countries.

Lane says knee-jerk resistance to the BLM proposals only serves to worsen the situation for wild horses. “The activists have really dug their heels in on anything other than turning the land over to [wild horses] and letting them roam free,” he said.