Brett Kavanaugh could be worse than you think: Here's how he'll gut environmental protection 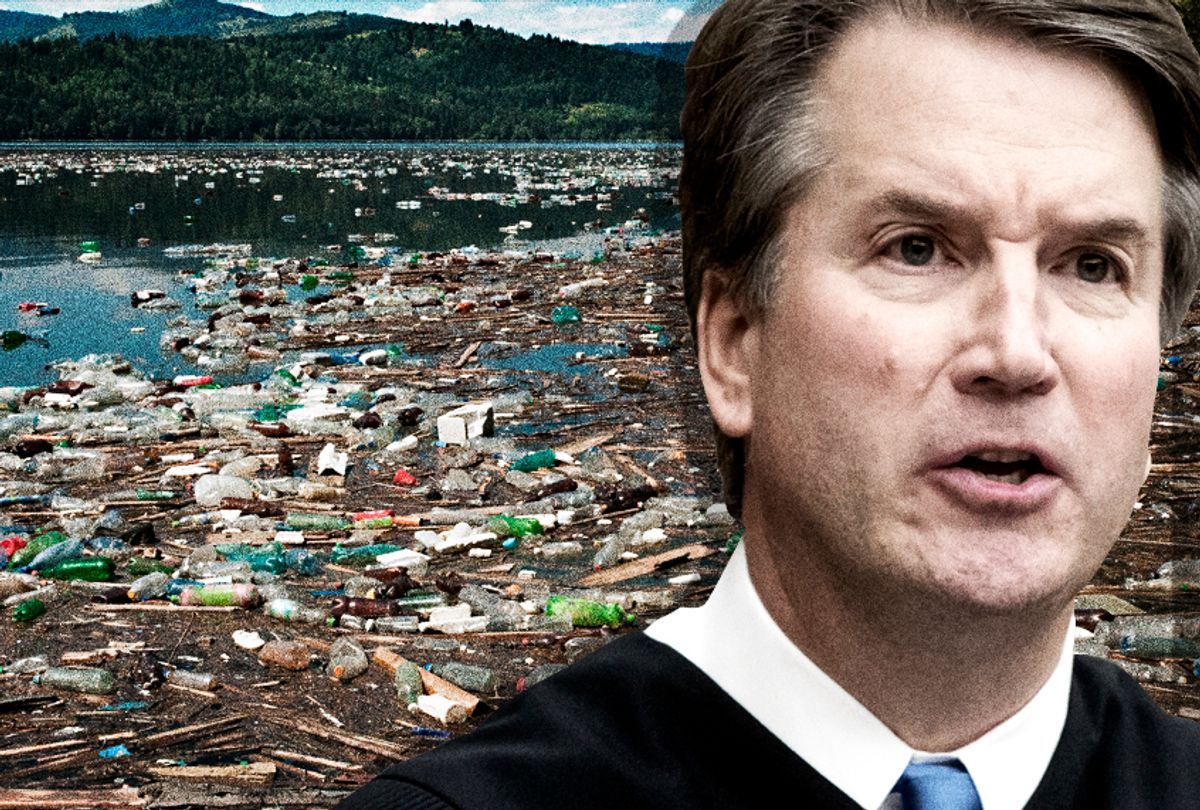 During the Senate Judiciary Committee's confirmation hearings last week for Brett Kavanaugh, Donald Trump's pick to replace Anthony Kennedy on the Supreme Court, a great deal of attention was paid to the issue of precedent. One of the central questions of this process is whether Kavanaugh would respect legal precedent when it conflict with the far-right orthodoxy of the contemporary Republican Party.

Before the senators, Kavanaugh repeatedly tried to frame himself as someone who may have a background in Republican politics, but who would set that aside on the high court, focusing on legal precedent rather than using the judicial branch roll back decades of progressive litigation on all manner of issues. His critics, meanwhile, portrayed him as a right-wing radical who would happily overturn even longstanding precedent, so long as that suited conservative goals.

Most of the focus was, of course, on the red-hot issue of abortion rights. Kavanaugh's efforts to appear respectful of decisions that upheld the right to abortion were severely undermined by the release of an email he wrote while working in the George W. Bush White House, in which he argued strongly against treating the Supreme Court decision in Roe v. Wade as settled law. But there's also good reason to be concerned that Kavanaugh takes a similarly skeptical view of Supreme Court precedent granting the Environmental Protection Agency broad rights to control air pollution, especially when it comes to the EPA's right to combat climate change.

“Kavanaugh has sought to overturn EPA safeguards that protect the water we drink and the air we breathe, frequently because he deemed them to be too burdensome to corporations," Alison Cassady, managing director of environmental and energy policy at the Center for American Progress, told Salon.

"He has tried to undermine the EPA’s authority at every turn, narrowly interpreting statutory authority when it suits him -- particularly when federal agencies use existing authority to respond to emerging crises, such as climate change."

“I think Judge Kavanaugh’s addition to the court will tilt the bench much further to the right," said John Walke, director of the climate and energy program at the Natural Resources Defense Council. He added that would likely manifest in the form of "more rulings against public health and environmental [regulation], as well as EPA, with more rulings in favor of corporations and polluting industries."

While the threat of climate change was starting to be understood before Congress authorized the Clean Air Act of 1970 — which gives the EPA the right and the obligation to regulate air pollution — it took a long time for the issue to become the environmental priority it is. Because of this, many conservatives have tried to argue that, whether or not one "believes" in the scientific consensus behind climate change, EPA lacks the authority to take action to prevent climate change. Their claim is that the the act was meant to regulate smog -- a narrowly defined conception of "air pollution" -- rather than greenhouse gases, and that the agency is exceeding its authority if it tries to address the latter issue.

In fact, George W. Bush's administration, in which Kavanaugh worked for several years, made this argument in court, in a case called Massachusetts vs. EPA. It lost, in a landmark 2007 decision where the Supreme Court ruled, 5-4, that the Clean Air Act covers "any air pollutant" that could "reasonably be anticipated to endanger public health or welfare" — and there's no doubt that global warming endangers the public. In 2011 and 2014, the high court reaffirmed this precedent, saying that greenhouse gases absolutely count as dangerous air pollutants and therefore the EPA is required to do something to reduce emissions.

But as Kavanaugh's 2003 email on Roe v. Wade, in which he noted that the Supreme Court "can always overrule its precedent," should give pause to anyone who thinks such environmental regulations are now protected. Even if Kavanaugh doesn't vote to overturn the 2007 decision directly, writes University of Virginia law professor Michael Livermore at SCOTUSblog, "the bedrock holding of Massachusetts v. EPA may gradually be eroded over time."

Skeptical language from Kavanaugh regarding federal authority over greenhouse gases popped up in 2016, during oral arguments before the D.C. Circuit Court over the Obama administration's Clean Power Plan. Kavanaugh suggested that the Clean Air Act was a "thin statute" that "wasn't designed with [climate change] specifically in mind."

In a different 2017 air pollution case, Kavanaugh wrote that "Congress’s failure to enact general climate change legislation does not authorize EPA to act."

Both these arguments were made after repeated cases in which the Supreme Court had ruled that the Clean Air Act covers greenhouse gases that contributed to climate change, and after the U.S Code was explicitly updated to mention effects on both "weather" and "climate" when interpreting federal regulatory authority over air pollution. While Kavanaugh has not said anything in public disputing the whole of the Supreme Court's findings in Massachusetts v. EPA, his comments make clear that he is not a fan of this particular precedent.

Last Friday, Hillary Clinton released a series of tweets raising the alarm about this issue, arguing that "Kavanaugh has consistently argued that the Environmental Protection Agency has limited authority under the Clean Air Act to regulate the carbon and other pollutants that are causing the planet to heat up" and therefore that seating him on the court "could make progress virtually impossible" when it comes to climate change.

Conservatives pushed back by pointing to Kavanaugh saying, during his confirmation hearings, that "in many cases" he had "ruled for environmentalist interests."

Walke said this testimony "bewildered" him, because one of the cases Kavanaugh cited as an example of a pro-environmental decision was "one of my very own cases that I lost in front of him."

Walke pointed to a Twitter thread where he explained the complexities of the case, NRDC v. EPA, which involved four challenges against industry polluters. On three out of the four challenges, Kavanaugh ruled against Walke's team, only ruling favorably on the fourth, which Walke described as "an unremarkable interpretation of plain statutory language." On all the more serious and complex questions, however, Kavanaugh ruled against the environmentalists. His efforts to spin the case before the senators and the cameras showed how devoid of substantial pro-environmental decisions his record truly is.

Democrats had their hands full during the hearing highlighting the dangers Kavanaugh presents to gun safety, reproductive rights, health care and any legal authority to hold Trump accountable for possible crimes, so environmental concerns got short shrift. But on Friday, they invited a Maine teenager, Hunter Lachance, to testify against Kavanaugh for ruling against the EPA's authority to regulate cross-state pollution in 2012.

"If states upwind from Maine are allowed to pollute more because federal regulations are weakened, then that’s bad for me," said Lachance, whose serious asthma is triggered by air pollution. "It’s bad for Mainers. And it’s bad for anyone in America who suffers from asthma or a respiratory disease."

Kavanaugh's decision was overturned by the Supreme Court in 2014, in a decision written by Justice Ruth Bader Ginsburg. While this particular decision didn't involve climate change, it illustrates the larger issue with Kavanaugh, which is his long history of trying to minimize the EPA's authority to regulate air pollution.

Walke argued that Ginsburg's decision politely accused "Kavanaugh of making up his own law and applying it" in this particular case.

The now-retired Anthony Kennedy was not especially supportive of federal efforts to reduce air pollution or greenhouse gas emissions. But he didn't display the reflexive hostility towards federal regulation that Kavanaugh appears to. Putting Kavanaugh on the court will, as Mark Joseph Stern at Slate argues, give Trump license to go full throttle on "trying to defang or destroy" any agency that "keeps mercury out of your air, discrimination out of your schools, and predatory lenders out of your wallet."

If Kavanaugh starts ruling consistently against the government's right to pass environmental regulation, as he is likely to do, that will be read as an invitation by industry interests and red-state attorneys general in red states to start suing to roll back those regulations that are already in place. This might indeed "make progress virtually impossible," as Hillary Clinton put it, and it could also go a long way toward destroying progress that's already been made. If Brett Kavanaugh is confirmed, he'll be sitting on the Supreme Court long after Donald Trump is out of office, empowered to block any reasonable efforts to turn back the doomsday clock on climate change.