To whom will her loyalty lie? Neither has announced their decision, and pressure from their home states is mounting 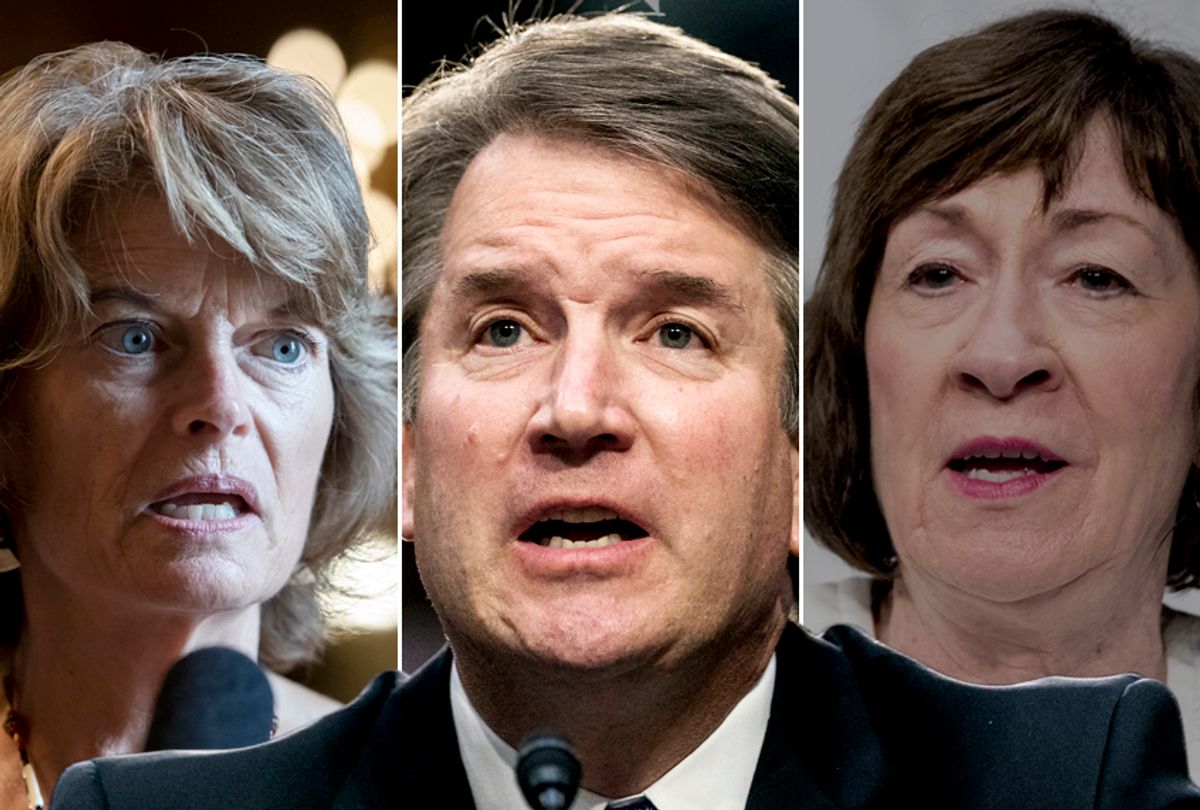 When it comes to Judge Brett Kavanaugh's confirmation to the Supreme Court, all eyes are watching how Republican Senators Lisa Murkowski of Alaska and Susan Collins of Maine will vote on his nomination. Neither has announced their decision, and pressure from their home states is mounting.

Activists have mailed approximately 3,000 coat hangers to Collins' office, according to the Associated Press – a reminder of the dangerous, back-alley abortions that were commonplace prior to Roe v. Wade. The fate of legal abortions has been central to the confirmation hearings – and to the anxieties of many women across the country should President Donald Trump's nominee advance. After all, Kavanaugh's appointment to the high court would remake the judicial body into a clear conservative majority of justices who oppose a woman's right to choose.

Kavanaugh told the Senate Judiciary Committee during hearings last week that Roe v. Wade was settled law, although released emails from his time in former President George Bush's White House appears to dispute his assertion. In March 2003, Kavanaugh wrote: "I am not sure that all legal scholars refer to Roe as the settled law of the land at the Supreme Court level since Court can always overrule its precedent, and three current Justices on the Court would do so."

Collins, who last month voted to preserve federal funding for Planned Parenthood, has said that she would not support a candidate who would overturn Roe v. Wade. But a spokeswoman for Collins told the AP over the weekend that the senator did not find Kavanaugh's email as contradictory to his testimony, since he referenced "legal scholars" in lieu of his own opinion. Many Democrats, however, have found Kavanaugh's explanation to be dubious.

For Murkowski, who also supports abortion rights, her constituents are even more worried about what Kavanaugh's appointment would mean for Native Alaskans — a demographic that was critical to her 2010 re-election campaign. Advocates and leadership from various native rights groups and tribal communities have raised their concerns to Murkowski and are coming forward in droves to urge her to oppose Kavanaugh's confirmation. According to HuffPost, they have cited his record on voting rights and environmental protections, as well as the importance of a forthcoming Supreme Court case connected to Alaska Natives' subsistence fishing rights.

READ MORE: A transgender Army bride in the ’80s

This November, the Supreme Court will review Sturgeon v. Frost, which raises the question of whether the federal government or the state should have the authority to regulate water in national parks in the state of Alaska. John Sturgeon is arguing for federal authority to be eliminated in this situation in favor of states rights. If Kavanaugh is confirmed to the Supreme Court and "votes with the other four right-leaning justices in favor of Sturgeon’s argument, it will destroy the way of life for tribal communities who rely on subsistence fishing in protected federal waters, some Alaska Native rights groups say," according to HuffPost.

A spokeswoman for Murkowski told the AP that the senator is continuing to vet the information that is coming out about Kavanaugh. But one source close to Murkowski told HuffPost: "If the Alaska Native community raises its decibel level on matters from subsistence to civil rights, that would register with Sen. Murkowski."

While much is at stake if Kavanaugh is confirmed when it comes to the rights of women, people of color, immigrants, workers and protections for Native communities across the country, for Collins, her vote of yes or no, could also be a determining factor in her reelection.

Collins is not up for reelection until 2020, however "activists have pledged to spend hundreds of thousands of dollars to fund an opponent to Collins if she votes in favor of the president’s nomination," the AP reported.

To whom will her loyalty lie?