400,000 civilians are eligible to be screened for a variety of ailments and diseases, only a fraction have been 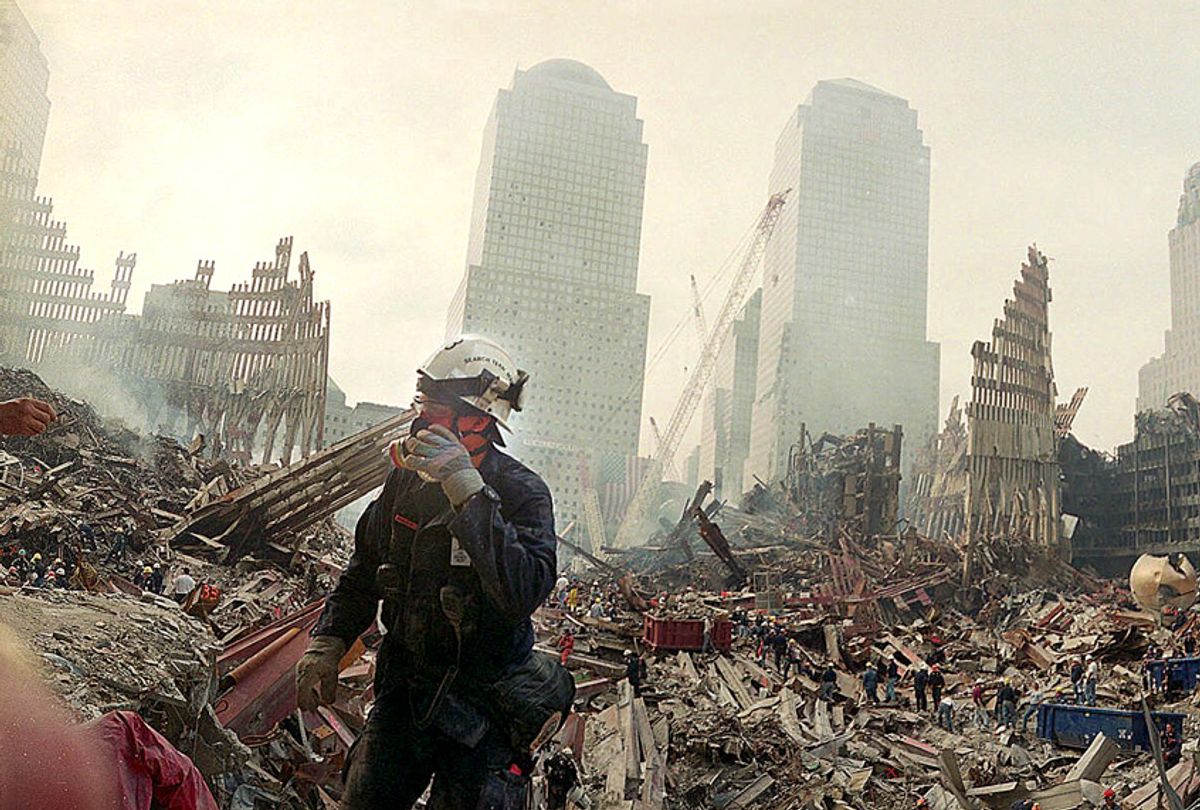 It has been seventeen years since the September 11th attack and from all outward signs it appears that lower Manhattan, the physical place, has fully rebounded and that history has moved on. But thousands of 9-11 first responders and survivors are battling WTC related diseases in a daily struggle that all too often is fought in isolation.

On the outdoor plaza of the fully re-constructed One World Trade Center tourists from all over the world stroll through a festive green market stopping to take selfies. It is a world way from the 9-11 attack that leveled the twin towers and left a massive toxic debris field that contaminated lower Manhattan air South of Canal Street for several months.

By some counts, in  the years since the attack in which close to 3,000 people perished, close to the same number of people have died since, from one of  dozens of World Trade Center related illnesses.  The FDNY, which lost 343 on the day of the attack, has buried an additional 177 members. For the NYPD, which lost 23 in the attack,  WTC disease has taken 156.

And even though public health officials say that the 400,000 civilians who lived and worked south of Canal Street for the several months of the clean-up should get a health screening just 17,000 have.

While WTC visitors are well aware of the body count on the day of the account, they are often unaware of the ongoing World Trade Center health crisis that still defines so many lives.

Lotey Aldrich, is a 24-years old from northern England on her first visit to the World Trade Center site. She was unaware of the WTC’s ongoing death toll. “Are you aware that there are a lot of people that have gotten sick from 9-11 that are still dying?” she was asked.

“No, I did not know that. It is quite shocking,” she said. “I would not have known that. We are going to the museums and find out more about it."

Carolyn Happy and her family moved into nearby Battery Park City in 2006. She says that for her and her neighbors the re-development of the site is a bit surreal.’The juiciness of all this high end retail does a very good job in putting a weird veneer over what happened here on September 11th,” Happy said.

Press accounts focused on the heroics of the uniformed first responders  and the need for them to get health screening,  Close to 72,000 have, the overwhelming majority of those that responded to the attack and months of clean-up.  Happy says she’s not sure why such a small percentage of civilians have signed up despite their exposure.

“One family that I am very, very close with I am super sure, as is my friend, that her husband died from the psychological impact,” she recalled. “He was already a fragile soul and he was an at home Dad and he had taken their daughter, who is now a senior in college  to nursery school on Greenwich and he had my daughter’s friend Jack in the baby bjorn when it happened. He and Jack were covered with that white dust and Jack stopped breathing at some point. Fortunately, someone, another friend in the neighborhood, was like  ‘I think Jack in is not breathing’ and he got him out of the baby bjorn and they were able to like get him into one of the little supermarket and they used a lot of water to like revive him.”

Happy is not surprised that tourists are not clued in about the ongoing WTC health crisis.

“I wouldn’t be surprised at all that they don’t have any idea of what that effect is and that it is still going on,” she said. “I have a feeling that really the whole point of the 9/11 Memorial is to show how remarkable the recovery is and that we can’t be broken  and we can’t this and we can’t that. I think if you were to include that there are still lingering side effects for a lot of  people who are going to die  painful from painful illnesses that doesn’t sound as heroic, so back on our feet again.

Just a few blocks from the bustling World Trade Center site is Manhattan Borough President Gale Brewer’s office. She says she is gratified that the 9/11 Memorial and Museum has committed to creating a dedicated outdoor memorial glen at the site to recognize the  ongoing toll taken by WTC related illnesses.

“The issue is for me is you are there to celebrate the responders, the survivors,” Brewer said. “The people who are sick who have died. Those are not people who died on 9-11 but  I have heard, I don’t know if this is correct, that the number could go up to 45,000 people. It is already more than died on 9-11 and I have friends, close friends, lawyers in the the area. I went to their funerals too. Nobody said anything until a doctor stood up and said ‘I think this person died of 9-11.' They are not on any list. So, you want to have something that recognizes them.”

Since the attack the first responder community, along with celebrities like Jon Stewart, brought tremendous pressure on Congress  to pass the Zadroga Act, named for NYPD Detective James Zadroga, who died from his 9/11 related illness. Programs like the Victims Compensation Funds and the World Trade Health Program are open to civilians and first responders alike.

But there are many cases where differences between the more generous pension plans and sick time policies for uniform first responders leave  other public employees, who also served at Ground Zero, at a distinct disadvantage despite their having a serious, even terminal WTC  diagnosis. At a recent New York State Senate hearing they made their case.

Artie Syken is still working for a state agency that deals with housing even though he is still battling multiple WTC health issues.

“It shouldn’t be who you worked for, what uniform you wore, no disrespect for the uniform forces,” Syken said. “But everybody was breathing the same dirty filthy air, We had no masks the first few days. I was going through Battery Park City up and down steps  looking for people that passed away in the apartments, dead dogs, dead people. It was terrible.

Timothy Demeo works for the New York State Department of Environmental Conservation. He had one of the most hazardous jobs at the WTC site, removing the vast quantities of fuels under the WTC pile. He told the Senate panel he has to keep working despite his serious health condition.

“I spent more than 1,000 hours down there under the pile recovering  the various fuels stored in the surrounding buildings,” he told the legislative panel.”I worked down there for five and half months. I have had four surgeries. I just met with a new surgeon in the very near term. My doctors have been writing me out fully disabled for years.”

He continued, “I was directed to respond. I have all of the documentation. I have over a dozen certified conditions  through the World trade Center Health program. I am in a very difficult position. I have a young family, a mortgage. I have three kids, college to pay for, 15 years left on my mortgage. How am I going to survive?”

Jen Dougherty is a retired FDNY EMT, who was forced to retire because her job title, unlike that of Firefighter, does not provide unlimited sick-time. “I don’t know what I could add to this except for if I was a Firefighter instead of an EMT  I would have been able to have continued collecting a pay check,” she said. “I am lucky because cancer happened to me this year and not last year because if it did I was short of 25 years and then I would have been without pay and I would not have been able to financially survive.”

Senator Tony Avella has drafted legislation that makes an attempt to address the disparities that could impact as many as 15,000 public workers, who were not cops or firefighters, but were ordered down to the World Trade Center site and had to breath the same toxic air that has already sickened and killed thousands.

“I am listening to all the different issues, the insurance, the benefits, and I am thinking to myself this is such bureaucratic nonsense,” he said. “I am thinking this is such a disgrace that we can’t resolve these things in a a much faster pace because these people are dying now. It is a unique situation that has never happened before and we are not responding fast enough  to the individual needs because the bureaucracy is just driving everybody crazy and it doesn’t enable people to get the service they need now, not three years from now, not ten years from now.”

Senator Marty Golden chairs the Committee on Civil Service and Pensions. “Anybody that was down there that worked, that responded to that and helped others, whether it was on their own time volunteering, or as a city employee, deserves to be be taken care of, not just for themselves but their families and the future of those families.”

Dealing with the WTC fallout is projected to take decades. In 2015 President Obama signed the  reauthorization of the Zadroga Act, which  included extending  the World Trade Center Health program until 2090.