JPMorgan Chase CEO Jamie Dimon claims he could beat President Trump: "I'm smarter than he is"

Dimon may well be smarter than Trump, but that is a very low bar to clear 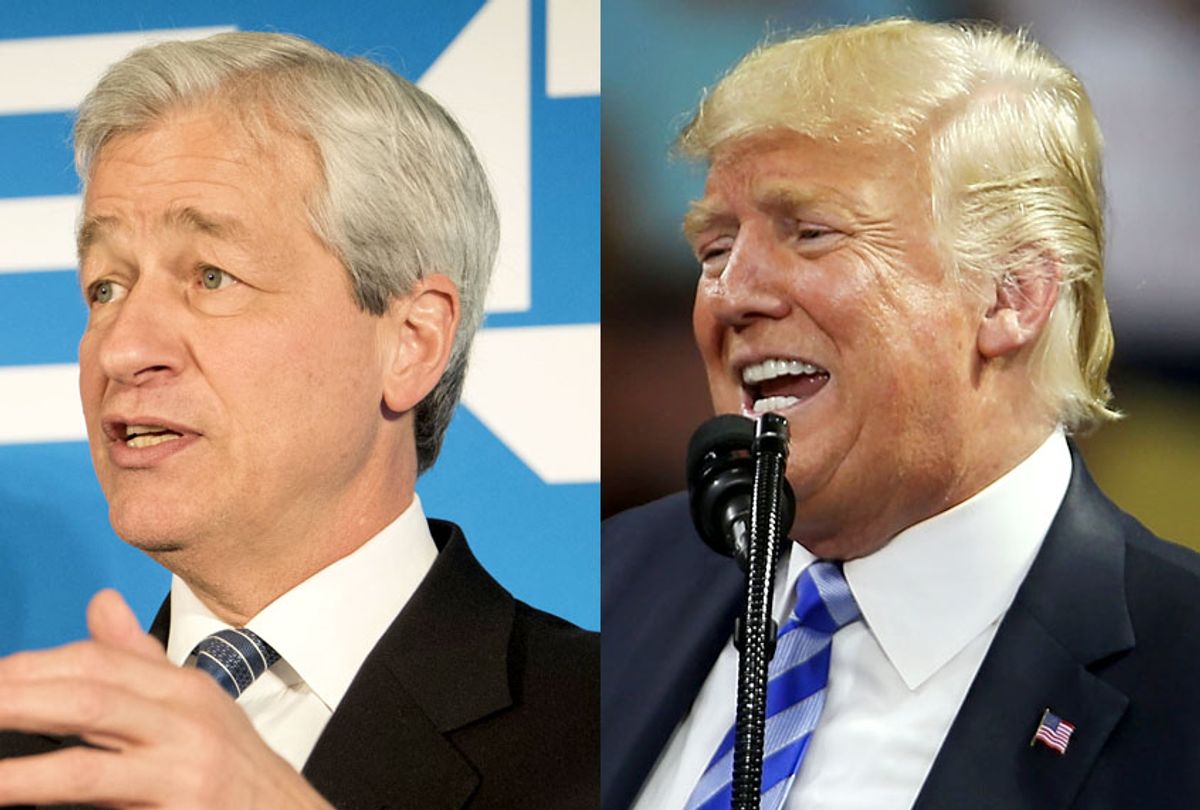 According to CNBC, JPMorgan Chase CEO Jamie Dimon told a New York conference on economic growth that he thinks he could defeat President Donald Trump in a one-on-one contest.

"I think I could beat Trump . . . because I'm as tough as he is, I'm smarter than he is" said Dimon, adding "And by the way this wealthy New Yorker actually earned his money. It wasn't a gift from Daddy."

Dimon may well be smarter than Trump, but that is a very low bar to clear. He is likely not as smart as he thinks he is if he believes either political party would ever back a Wall Street investment banker for president, a profession that is viewed extremely negatively by the voting public.

The financial sector is routinely the focus of attacks from both liberal and conservative politicians. Polls show that people who "ambivalently" voted for Trump feel more negatively about him upon learning his Cabinet's ties to Wall Street, by a margin of 42 to 23.

Even though financial institutions are vital to our nation, voters distrust people who have so much concentrated power over the economy, and who have frequently abused that power. The fact that investment bankers notoriously play both sides of the fence and elect people from both parties also means they aren't welcome in most partisan circles.

And Dimon's claim that he "earned his money" promptly drew mockery from social media:

Bailout Beneficiary Has Audacity to Suggest He, Too, Isn’t the Product of a Handouthttps://t.co/eyHb0dgEyW

Dimon did admit one thing, though. "I can't beat the liberal side of the Democratic party." And faced with criticism for his statement, he told ABC reporters that he regrets bringing it up at all. "I shouldn't have said it," he said.

In January, Dimon claimed that Democrats cannot beat Trump because they don't have a "strong centrist, pro-business, pro-free enterprise [candidate]." He seems to miss the fact that research shows Trump voters, by and large, were voting for a racial agenda, not an economic one.

Nonetheless, Dimon has acknowledged he would have no chance in a presidential election and said that he is committed to staying in his current job.