Inside the Saudi terror machine: Understanding Wahhabism and Salafism

These two strains of Islamic fundamentalism are ideologically identical, which hasn't stopped them from feuding 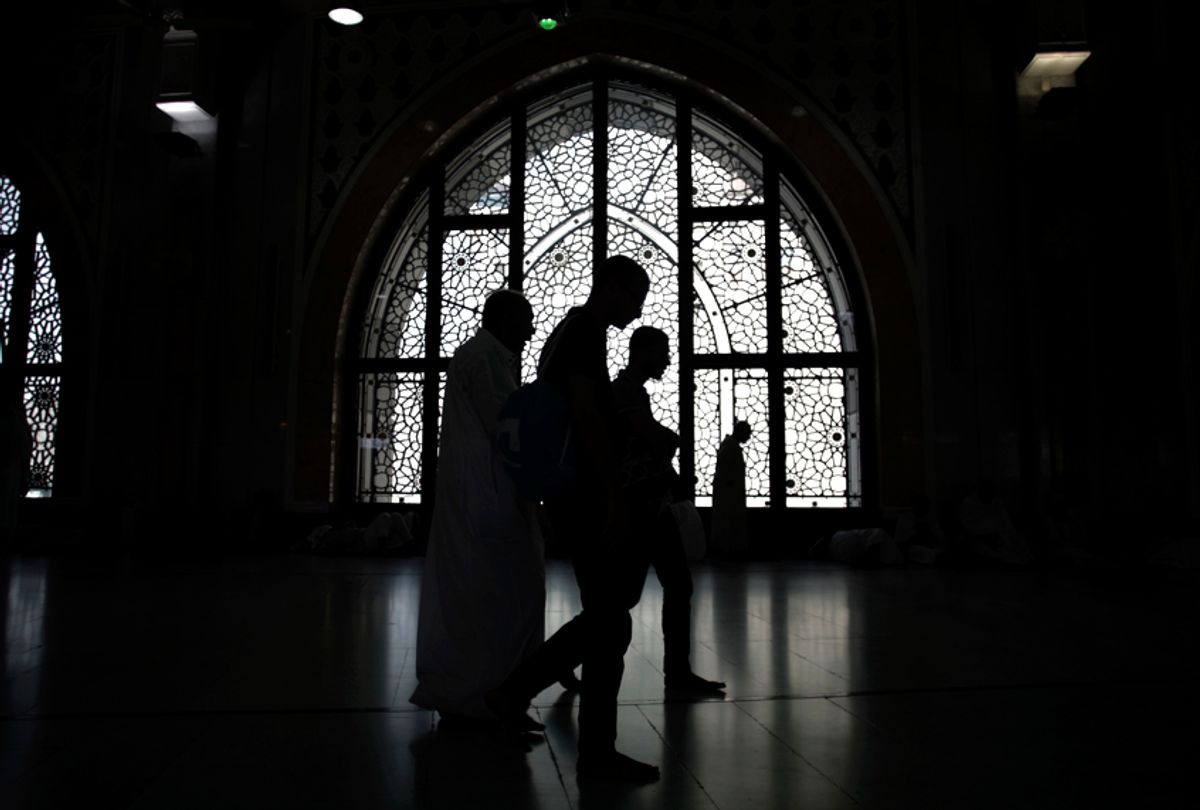 Muslim pilgrims perform the ritual walk back and forth between the two small hills of Safa and Marwah, at the Grand Mosque, in Mecca, Saudi Arabia, (AP/Khalil Hamra)
--

Excerpted with permission from "The Saudi Terror Machine: The Truth About Radical Islam and Saudi Arabia Revealed" by Pierre Conesa. Copyright 2018 by Skyhorse Publishing, Inc.

Although the Kingdom [of Saudi Arabia] had decided to use the term “Salafism” instead of “Wahhabism,” the question of the distinction between the two ideologies remained relevant. The internal debate has taken place in the West on whether to use the term Salafism (whether jihadist or not) more readily than Wahhabism. This was syntactically legitimate, because Salafism meant orthodoxy and orthopraxy. But it was less so politically. Making the connection between the two religious practices would mean holding Saudi Arabia responsible for the spread of Salafism, which Western leaders have always proscribed. However, the two are ideologically identical, as we shall try to demonstrate.

According to some authors, Wahhabism is the strictest Saudi form of Salafism, supported by active and diligent leaders who use their considerable financial resources to promote this conception of Islam throughout the world. Other scholars, like Stéphane Lacroix, differentiate between the old form of Salafism (called Wahhabism) and the new Salafism, called neo-fundamentalism: “As opposed to Wahhabism, Salafism refers . . . to all the hybridization that has taken place since the 1960s between the teachings of Muhammad ibn Abd al-Wahhab and other schools of Islamic thought.” Hamid Algar and Khaled Abu El Fadl affirmed that during the 1960s and 1970s, Wahhabists knew that they could not “spread in the modern Muslim world” in the repellant form propounded by the Saudi regime and, therefore, that a new qualifier was necessary. Ahmad Moussalli categorized Wahhabism as a subset of Salafism, declaring that “As a general rule, all Wahhabis are Salafists, but not all Salafists are Wahhabis.”

In the one-step-forward one-step-backward competition between these two schools based on a nostalgic return to the dreamt of golden age of the Prophet, one can say that Salafism is the most modern form as it has managed to disseminate itself in countries and categories that Wahhabism had never managed to reach. Gilles Kepel observed that the European Salafists he had met in the 1980s were totally apolitical. Then, in the mid-1990s, he noted that some were beginning to think that violent jihad was “justified in order to achieve their political goals” and concluded that the “combination of alienation practiced by the Salafists against everything non-Muslim in European society and violent jihad had created a volatile and explosive mixture that was more attractive than the propaganda of the old-generation Salafists, who were content with praying and fasting without taking action.” According to him, Jihadist Salafism combined “respect for the sacred texts in their most literal form . . . with an absolute monomania for jihad, whose primary target was America, perceived as the greatest enemy of the faith.” But in recent years, taking up the Wahhabist refrain once again, especially since the war in Syria and Iraq, jihad has been increasingly directed against the Shiites, bad Muslim rulers, Sufis and so on. Today, the term refers to a composite set of movements consisting of, in particular, quietist movements, activists advocating political action, jihadists, and former Muslim Brotherhood members who have shifted towards violence. “The theses of millenarian, misanthropic, untamed, warlike, anti-Christian, anti-Semitic, and misogynist Islam are found in the raw state in Wahhabism,” wrote Hamadi Redissi. The theological proximity of foreign Salafist preachers trained in Saudi Arabia who continue to maintain their ties with their masters, often cited as references, is not surprising: Abdulaziz Ibn Baz, Muhammad Nasiruddin al-Albani, Safar al-Hawali and so on. If a fracture did take place, it was the one that emerged during the Gulf War around the issue of the call to Western armed forces to defend the land of the Holy Shrines. This issue will be discussed in greater detail in the following chapters. However, it did mark the end of a long process of crises between the ultra-legitimist tradition of the ulemas loyal to the regime, along with some of its dissident members, with or without a jihadist past, and foreign scholarship students returning to their country.

The most lucid of the ulemas now recognize that ISIS or Daesh is a local by-product. The former Imam of the Great Mosque of Mecca, Al-Kalbani, stated in the New York Times in November 2015, that “Daesh adopted the Salafist ideology. It is not the ideology of the Muslim Brotherhood, Qutbism, or Asharis . . . Daesh drew its ideology from our books, our principles . . . We follow the same road, but take a different path.” If the semantics used in the countries concerned by Saudi religious foreign policy were to be analyzed, it would emerge that the terms used do not seek to differentiate between Salafism and Wahhabism on religious grounds, but rather in diplomatic terms, depending on the concerned country’s relations of dependence vis-à-vis the Saudi regime. Hence, in Russia, it is Wahhabism, while in Kyrgyzstan, it is Salafism and definitely not Wahhabism. Therefore, it is the Salafist conception that is examined here, which Olivier Roy called “neo-fundamentalism” in his various works, including "Globalized Islam." The two characteristic elements are theological scripturalism and hatred of the West’s cultural values, to which must be added a delegitimization denouncing all other forms of religious thought.

The Wahhabi and Salafist ideologies are impossible to distinguish today, which does not prevent them from rivaling or even battling each other. More than religious formalism, social control, anti-Occidentalism and the explicit legitimization of violence are quite similar in the texts of both movements, but there are two radical political and religious differences that fundamentally oppose them. First of all is the idea of the restoration of the Caliphate, inaccessible to the Sauds, which would delegitimize their position as “Custodians of the Holy Shrines.” Secondly, the establishment of a real Islamic territory, different from the existing Muslim states, whose national identities the Salafists refuse to recognize.

Political ideology: According to a French Muslim

“Wahhabism is the Muslim form of religious totalitarianism,” as one French Muslim theologian, who wished to remain anonymous, told me.

Like all sects that accuse other religions of being “sects,” Wahhabi–Salafism describes other expressions of Islam as sectarian practices: “I call myself a Salafist to distinguish myself from all misguided sects who call themselves Muslims,” said one of the interlocutors to Samir Amghar. The Sacred Book is read and commented to the exclusion of any later contribution, in particular Islam’s legal schools. It is conceived as a collection of social codes providing an answer for everything. Theological principles are simplified to the extreme: the oneness of God; the rejection of any other legal school and of ecumenism of any kind. In both camps, attacks against other practices of Islam are constant. Wahhabism rejected the influences of Sufism, which dominated in the Balkans, Turkey, Central Asia, India, Malaysia and Indonesia. The same behavior can be seen in the Salafist Jihadists, for example in Nigeria, Mali and Senegal. Where violence has spread, Salafists have targeted traditional religious leaders first. Proof of this can be found in the assassination of Imam Sahraoui by the GIA in Algeria, or the attacks against the Sayyeds in Yemen, despite their being descendants of the Prophet.

The highly ritualistic Salafists are very anxious to differentiate themselves through their daily gestures: always use three fingers to eat, drink water in three stages with the right hand during meals, do not blow on tea to cool it, use the right hand while sitting down. The quarrel over “crossed arms” during prayers, which, for a time, tore Côte d’Ivoire’s Muslim community apart, illustrates this kind of rigorism. It set those who prayed with crossed arms on their breasts against those who prayed with outstretched arms, each claiming that they knew the Prophet’s habits better. But, like the quarrel over the sex of angels that tore the Byzantine Empire apart, the debate remains open to this day.

As with any proper radicalism (secular or religious), theological quarrels include a competition for leadership. Since the Wahhabis refused to be challenged by the “Tablighi” (a traditionalist religious conception of Islam from India), Grand Mufti Ibn Baz declared that “The Tablighi Jamaat, which is of Indian origin, is full of fables, innovations, and forms of polytheism . . . following them is not allowed.”

What about human rights?

Would the religious system allow change? That may seem doubtful if you read Sheikh Muqbil’s sermon: “Why do we forbid elections? We forbid them because they give Yemeni non-believers the same rights as Muslims.” Saudi Arabia has formally acceded to the major international conventions on the protection of human rights: The Rights of the Child (1996); Against Torture (1997); Women’s Rights (2000); Trafficking of Migrants (2002), etc. But it considers it its right to apply them only if these texts are not considered contrary to the Sharia — needless to say, none of them is complied with. As for slavery, has it been abolished — or rather, modernized? According to the CIA’s "World Factbook": “Saudi Arabia is a destination country for men and women subjected to forced labor and, to a lesser extent, forced prostitution; men and women from South and South-East Asia . . . who voluntarily travel to Saudi Arabia as domestic servants or low-skilled laborers subsequently face conditions of involuntary servitude, including nonpayment and withholding of passports. Saudi Arabia does not fully comply with the minimum standards for the elimination of trafficking and is not making efforts to do so.” The most basic rights of Saudi citizens are flouted. For instance, Raif Badawi, a young Saudi blogger, was sentenced to 1,000 lashes and 10 years in prison for criticizing the role played by the religious police. Ali Mohammed al-Nimr was sentenced to be beheaded and crucified and finally publicly exposed “until his flesh rotted.” In 2012, when he was only 17 years old, he had taken part in a protest against the regime in the Shiite region of Qatif. The Saudi authorities also accused him of being a “terrorist” and alleged that he had thrown Molotov cocktails at the police. The young man was also unlucky enough to be the nephew of the Shiite dignitary Al-Nimr, who was himself sentenced to death and executed on Jan. 3, 2016.