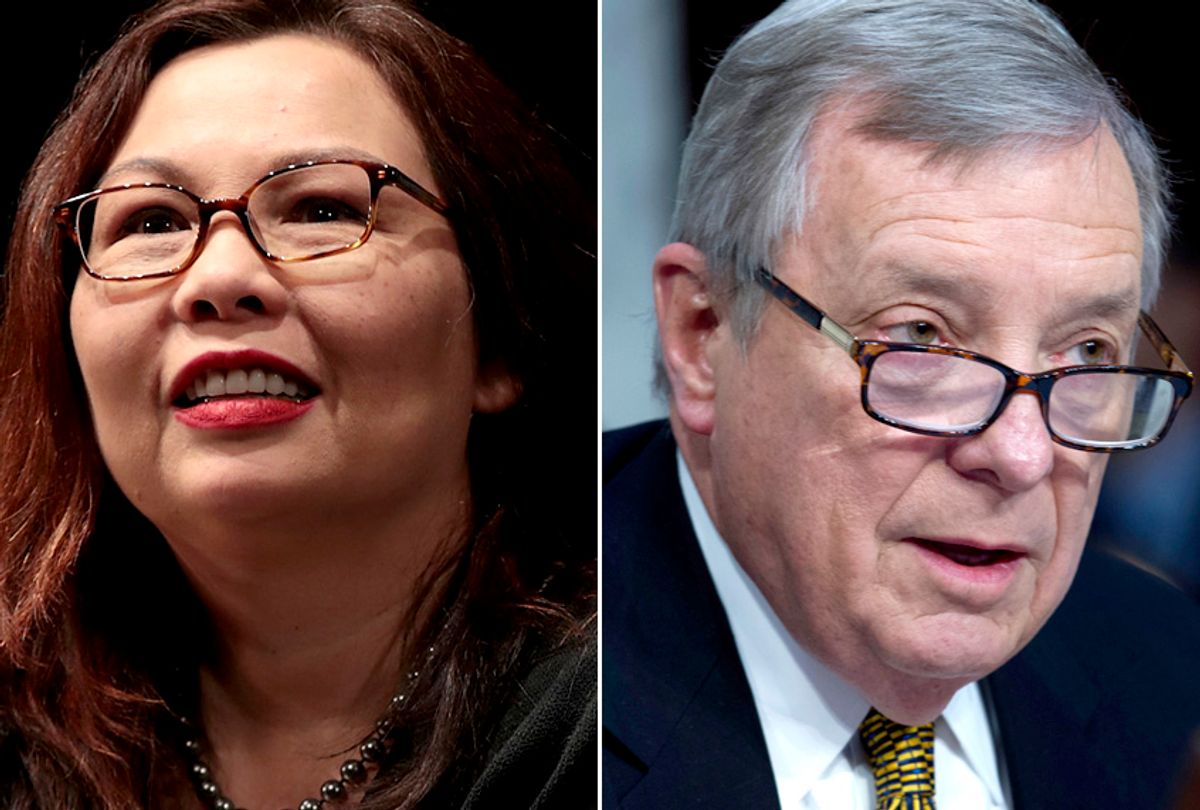 Illinois’ Democratic senators are asking the U.S. Department of Housing and Urban Development to detail what steps the agency is taking to address problems plaguing public housing apartments in East St. Louis, including mice, mold, leaky ceilings and security concerns.

In a letter to HUD Secretary Ben Carson, Sens. Dick Durbin and Tammy Duckworth said they were “concerned HUD is failing to use its oversight authority” to ensure decent, safe conditions for residents living in properties owned and managed by the East St. Louis Housing Authority.

The letter, sent last week, cites findings from an investigative report published by The Southern Illinoisan and ProPublica this month that detailed ongoing problems a year after HUD gave the housing authority back to local control after a 32-year federal receivership.

At a ceremony in the city last September, Carson praised HUD’s work to improve the local agency, which houses nearly 4,000 residents, more than half of them children. At the time, he declared that residents “and the future of our children” were no longer at risk in East St. Louis.

But in the weeks leading up to the transition, HUD’s own inspectors had failed nine of East St. Louis’ 12 public housing properties. Many of the small city’s housing complexes date back to the 1940s, 1950s and 1960s and are in need of major repairs that the housing authority says it cannot afford.

The month before Carson’s visit, a young mother, Alexis Winston, was killed in her apartment at the John Robinson Homes by an intruder who entered through her unsecured first-floor kitchen window. Winston had complained to the housing authority several times about the window, family and friends said.

Weeks before that incident, a 60-year-old disabled man died after an arson fire in a high-rise apartment where residents have made repeated pleas for enhanced security.

“The ProPublica-The Southern Illinoisan article detailed the story of a 23-year-old woman who repeatedly requested that housing officials fix a window in her unit that was missing a security screen,” Durbin and Duckworth wrote. “Officials reportedly failed to replace the security screen, and the woman was found murdered near her crying toddler after a home invasion through the broken window. HUD should use its oversight authority to address these issues and ensure residents can live in their home without threats to safety or health.”

In a separate statement, Duckworth called HUD’s decision to end its receivership despite knowledge of serious health and safety issues in the complexes “a mistake.”

“Secretary Carson owes the residents — and all of us — an explanation about why HUD celebrated this misguided course of action,” she said.

Unlike Duckworth, Durbin supported the transition to local control, saying he trusted the city’s mayor. During the final years of receivership, a HUD administrator served in the place of a traditional local board.

Though Carson ended HUD’s takeover of East St. Louis, the transition included two years of “enhanced” monitoring of local management by HUD, in addition to assistance in creating a plan to address old and troubled buildings with limited funding options. HUD spokesman Jereon Brown declined comment on the senators’ letter. He said the agency will respond directly to them.

In an email, the executive director of the East St. Louis Housing Authority, Mildred Motley, said her agency continues to move forward with its efforts to develop new affordable housing units. In addition, she said, the housing authority is using its limited federal funding to address “severe needs” as they arise in individual units.

A 60-page plan to address the housing authority’s troubled properties calls for the demolition of about 460 units in various public housing complexes in the city. This includes a mix of occupied and unoccupied units. The projected cost of demolition and assisting residents in relocating from occupied units is about $3.4 million.

“This will put an additional strain on ESLHA’s (East St. Louis Housing Authority) limited capital resources,” according to the plan, obtained by The Southern Illinoisan through a public records request.

The report said the housing authority has about $10 million set aside to build upward of about 150 new units, by combining public funds with tax credits or other private investments. But it also detailed steep challenges to build enough new, affordable housing to replace old public housing complexes that may be too costly to save. High rates of poverty, crime and environmental hazards make it difficult to attract people of middle income to move back into the city, the report said. Motley said the report “is still a draft document under review and subject to change.”

The area’s representative in the U.S. House, Mike Bost, R-Murphysboro, said in a statement that conditions in East St. Louis are “clearly far from ideal” and that “there’s no question there is still plenty of work to do.”

But he defended Carson’s decision to hand control back to local officials, saying the housing authority had met “designated benchmarks set by HUD.” Bost’s office shared an eight-page report created by HUD that concluded that the local housing authority “has the capacity to operate successfully and independently and to continue to sustain and improve its performance after HUD’s departure.”

The summary did not mention the failing property inspection scores. Durbin, who grew up in East St. Louis, and Duckworth asked Carson to get back to them by Sept. 21 with a detailed explanation of what HUD is doing to help the East St. Louis Housing Authority improve living conditions.