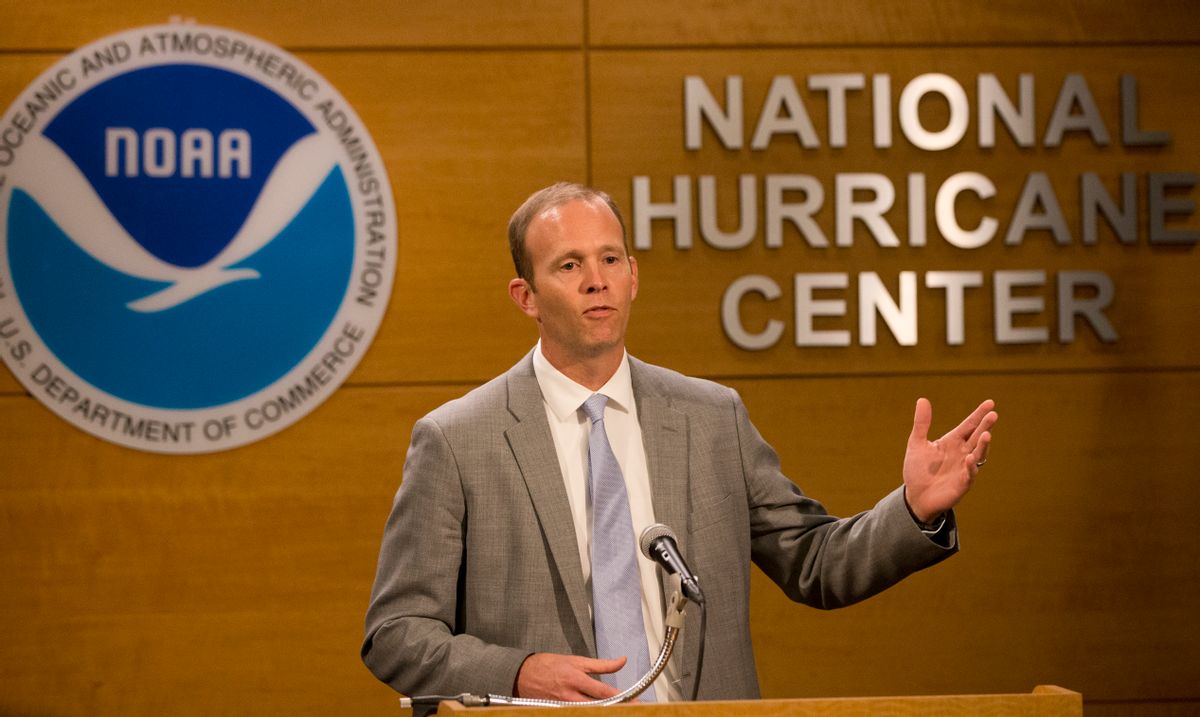 FEMA administrator Brock Long has an interesting explanation as to why new studies have found that more than 65 Puerto Ricans died due to Hurricane Maria.

In a "Meet the Press" interview on Sunday, Long told host Chuck Todd that the studies counted hundreds, if not thousands of deaths that were indirectly caused by Maria, such as deaths from heart attacks or spousal abuse.

“You might see more deaths indirectly as time goes on," Long said. "Spousal abuse goes through the roof. You can’t blame spousal abuse after a disaster on anyone.”

The Trump administration has been sensitive to accusations that they undercounted the number of deaths caused by Maria. Fearing that the disaster in Puerto Rico will become Trump's Hurricane Katrina, the administration has unleashed a coordinated campaign to delegitimize the studies. Trump himself has tweeted about the new estimated death tolls, which he claims are false.

3000 people did not die in the two hurricanes that hit Puerto Rico. When I left the Island, AFTER the storm had hit, they had anywhere from 6 to 18 deaths. As time went by it did not go up by much. Then, a long time later, they started to report really large numbers, like 3000...

.....This was done by the Democrats in order to make me look as bad as possible when I was successfully raising Billions of Dollars to help rebuild Puerto Rico. If a person died for any reason, like old age, just add them onto the list. Bad politics. I love Puerto Rico!

He has gone after one study conducted by George Washington University in particular.

“When Trump visited the island territory last October, OFFICIALS told him in a briefing 16 PEOPLE had died from Maria.” The Washington Post. This was long AFTER the hurricane took place. Over many months it went to 64 PEOPLE. Then, like magic, “3000 PEOPLE KILLED.” They hired.... — Donald J. Trump (@realDonaldTrump) September 15, 2018

....GWU Research to tell them how many people had died in Puerto Rico (how would they not know this?). This method was never done with previous hurricanes because other jurisdictions know how many people were killed. FIFTY TIMES LAST ORIGINAL NUMBER - NO WAY! — Donald J. Trump (@realDonaldTrump) September 15, 2018

For what it's worth, Carlos Santos-Burgoa, the head researcher of the GWU study, has defended his work, noting that 2,975-deaths number underwent rigorous peer review.

“We stand by what we did,” Santos-Burgoa told USA Today in a telephone interview.

Todd asked Long on Sunday if he accepted the numbers from the GWU study.

"The numbers are all over the place," Long said. "FEMA doesn't count deaths... the deaths that are verified by the local county coroners are the ones that we take."

As FEMA prepares to aide the states recently hit by Hurricane Florence, Long himself appears to be fighting for his job. The Washington Post reported on Saturday that Homeland Security Secretary Kirstjen Nielsen wants to replace him over alleged misuse of government vehicles.

Long addressed the scandal at the end of his interview on Sunday, insisting that Nielsen has never asked him to resign and that the allegations were just a product of confusion as opposed to corruption.

You can watch the full interview from "Meet the Press" below: