How "Toy Story" changed everything – in its first eight minutes

Pixar's first feature opened with a visceral explosion of animation, screenwriting and existentialism 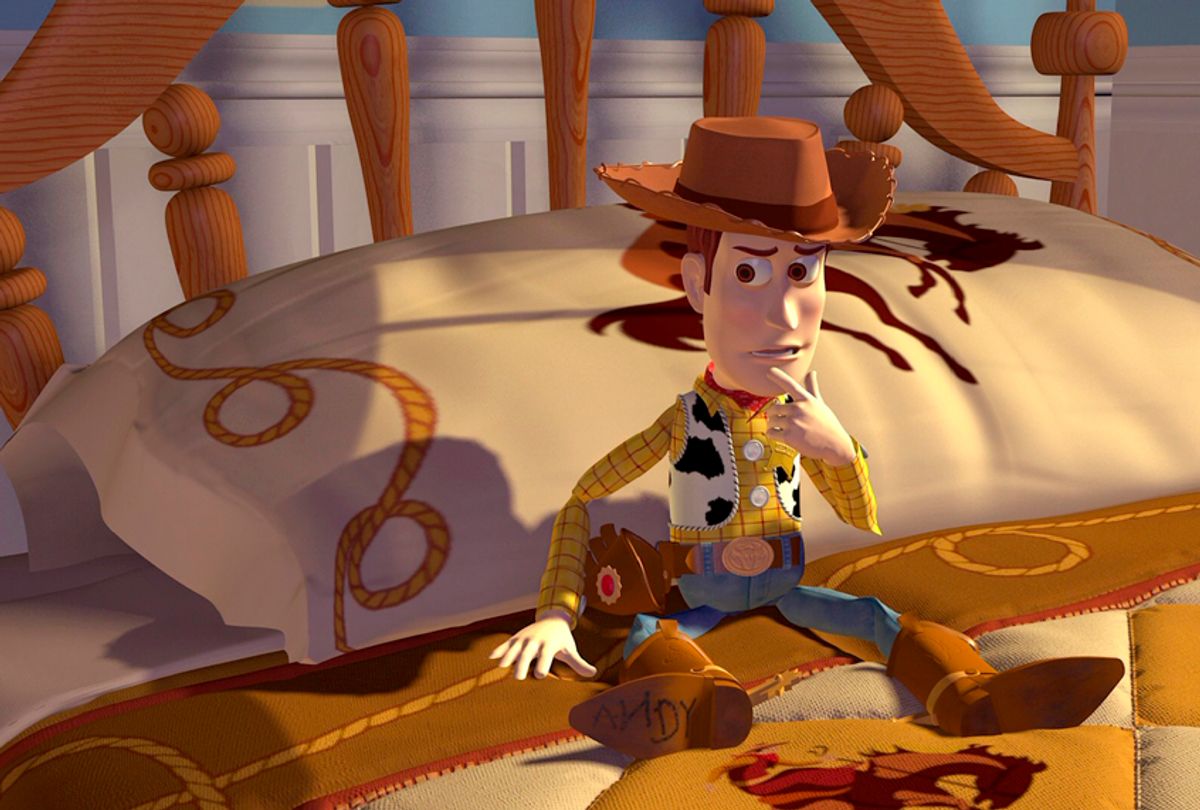 Excerpted from "Toy Story: A Critical Reading" © Tom Kemper (2015). Reprinted with kind permission of the author, the British Film Institute and Bloomsbury Publishing.

The pre-title sequence sets up the genre blending of the film itself, as well as the scaled-down universe of its narrative world. It also effectively establishes the film’s rejection of the story world of Disney films. No exotic locations. No fairy-tale characters. Just toys. Ordinary toys in an equally ordinary setting: a boy’s bedroom. And it recognizes and celebrates the creative play of children and the reality of their bedrooms, little microcosms swirling with meaningful commodities brought to life through the mirthful adventures of a child’s imaginings. It also acknowledges and appreciates the haphazard mixture of toys (the variances in scale, manufacturing and material sources, and genres) that accrue in a child’s life, and how children employ them in their play. And it does so while playing around with narrative genre, combining elements of science fiction, Westerns and daredevil action-adventure. 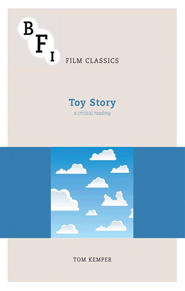 The title sequence offers a montage that establishes the relationship between Andy and Woody. It also provides further opportunities for displaying the dimensional dynamics of computer animation. Thus, when Andy plays as Woody wrangles the cows, he spins two boxes around to reveal childlike drawings of cows. But the boxes spin as cubes, with a strong sense of dimension, just as a box, when it is pulled towards the foreground, changes perspective in precise proportional distribution of the object’s moving lines.

As Andy slides Woody down the stairwell banister, a cut to Woody’s perspective plays with the movement into the spatial depth of field allowed for by computer animation. In hand-drawn animation, Disney and others had experimented with depth in two different ways: one involved drawing a select number of frames in perspectival lines and then simply putting those frames in a loop (to save the time and expense of actually drawing enough frames to fill out the entire sequence). Disney also developed, more famously, the multi-plane animation stand, which set various elements of the scene (foreground, mid-ground, background) literally on different physical planes as the camera photographed the scene. Thus, for example, some bushes in the foreground would be drawn on one plane; some trees further in the background on another; and character animation in the far background on a third, using the various planes to create the illusion of depth through the camera lens, often accompanied by some camera movement (closing in on the planes to simulate moving into the space). But in this case, only the camera moved in relation to two-dimensional drawings, albeit on multiple planes. 3-D computer animation allowed each image to move in a dimensional relationship: over a stairwell, down stairs, around a corner, all reconfigurations traveling into a visual field as objects altered their shapes in relation to each change in perspective.

As when Woody zips down the banister, "Toy Story" exploits the novelty of computer animation again and again through such movement and point-of-view (POV) shots. In fact, the subjective shot descending the banister is shortly followed by an even more spectacular POV shot as Andy repeatedly spins 360 degrees with Woody in a chair, and we see Woody’s perspective as the entire living room crisply whirls by on the screen. This is immediately topped by a dazzling POV shot as Andy launches Woody from the chair, and again we see his perspective as the room spins around from an upside-down shot, flying through space, righting itself mid-air by spinning back to a normal perspective and approaching another chair. When Woody lands on the chair, the camera pivots around him dramatically, setting up the next POV shot as he spots the birthday party decorations. Of course, in the lively play of the film’s shifting perspectives, we remain unaware at this point that this shot embodies the toy’s recognition of its visual field. That is, many POV shots symbolize some form of cognitive understanding of an important element in the shot’s visual field: namely, the vision of a character – a revelation, an acknowledgment of something significant. Here, as we later learn, Woody recognizes that Andy’s birthday party is taking place today, an alarming change in the schedule. The sequence confirms Woody’s perspective by cutting back to a closer shot of his plastic, frozen face as he takes in the information.

Placing Woody on Andy’s bed affirms Woody’s status as Andy’s favorite toy – the culmination of the title-sequence montage – and establishes the bed’s symbolic significance. A slow rolling movement into the bed, lit by strong, warm-hued light streaming in from the window, sets up the surprising moment (and the premise of the film) when Woody springs to life in Andy’s absence. This cue heralds a quick introduction of the toys, and the major and minor characters. RC, the remote-controlled car, zips around in circles in a busy, colourful long shot depicting numerous toys coming to life. Once again, this flurry of activity puts computer animation on display as it cleanly handles an almost cacophonous complexity of movement and colors in single shots.

The following shot sets up a minor motif in the film suggesting that the toys actually play – and play with each other – when their owner is absent. The Little Tikes go whooshing down the Hot Wheels tracks as if on a big slide. RC and the fire engine zoom around the room. When Slinky Dog crawls out from under Andy’s bed, he pushes a checkers board, expecting to start a new game with Woody, suggesting a regular routine.

The film establishes Woody as the toy community’s leader as he ponders how the other toys will react to the news about Andy’s birthday party, both in his first lines and in the protective tone of his conversation with Slinky Dog. When Woody asks Slinky Dog to gather the other toys for "a staff meeting," it confirms his leadership role, suggesting that the toys form not only a community, but also a kind of staff, whose job remains to play with Andy.

Even in small dialogue-driven scenes, the Pixar artists exploit the striking perspectival effects of 3-D computer animation. On an immediate level, Woody and Rex’s discussion about the dinosaur’s struggle to create a fearsome roar depicts the complexity of the film’s humour and characterization, revealing the toys' various neurotic tics and obsessions, and how, in this case, their manufactured personas fail necessarily to match their personalities: Rex the neurotic dinosaur (inflected in the vocals brilliantly by Wallace Shawn), and Woody, shortly revealed as almost certifiable in his neuroses and anxieties (far surpassing Rex’s in terms of intensity). But the traveling shot acquires a dynamism, otherwise lacking in horizontal or lateral movement, through the mise en scène, as the two figures pass behind a Hot Wheels track loop, which naturally changes shape as the perspective shifts in sync with the moving shot. Placing the track in the frame adds visual energy to the shot but also affirms the micro-world inhabited by these characters, the sense of scale that reminds us of their size, something the film-makers will continue to play with throughout the film.

The scene of the toy meeting led by Woody sets up the film’s time-frame by clearly establishing the imminent move to a new house scheduled for a week’s time. Woody telegraphs this information wittily using a Playskool microphone toy – through a minor gag in which he reminds the toys to pick a moving buddy. The next line also signals the stakes and the thematic motif of the film: "I don’t want any toy left behind."

The scene then introduces one of the film’s terrific ironic inflections, creating a satire of consumer culture on a par with the humor of "The Simpsons." Birthday parties and Christmases, times of ebullient joy for children in terms of receiving toys, get flipped around entirely, transformed from this different perspective to times of great terror and anxiety. An insert in this scene reveals the film’s dual address. When Slinky stands up for Woody, Mr. Potato Head ribs another toy, removes his lips and stamps them repeatedly on his rear end. Visualizing "kissing ass" remains unreadable for the underage crowd but tacitly addresses decoding adults (and is perhaps, since it lasts only a few seconds, mainly targeted at adults on repeat viewings). It’s likely the ratings board didn’t notice the shot; yet even if they had, its adult meaning remains elusive: "kissing ass" (unacceptable for a G-rating) or "kissing butt" (acceptable for a G-rating). At any rate, the shot resonates with the subversive tone of much contemporary animation.

Woody also lays out some of the existential logic of the film’s perception of toys, a philosophical perspective fully comprehended by the toys. "It doesn’t matter how much we’re played with. What matters is that we’re here for Andy when he needs us. That’s what we’re made for, right?" The scene offers a nice contrast to the generally manic and loud performance by Tom Hanks throughout most of the film. It also illustrates the balance the writers ultimately struck in Woody’s character, as he was originally much more tyrannical. Here, only eight minutes into the film, Woody’s leadership demonstrates empathy and reassurance, stressing the communal struggle of Andy’s toys. While this scene balances out Woody’s character, it also serves, in classical fashion, as an ironic set-up for the film’s primary trauma – namely, that Woody himself will be replaced by a new toy and riddled with all of the anxiety he attempts to squelch in the other toys in this sequence. Thus, the scene triples up as a portrait of Woody as a community leader, while establishing exposition on the toys’ anxieties and existential purpose, and also ironically sets up the main dilemma shortly confronting Woody and driving the dramatic tension in the film – Woody’s encounter with his replacement.

Writer and producer Mike Reiss gives Salon an exclusive look at how Homer, Marge, Lisa, Bart and the crew stay relevant after 30 years