Why we love robotic dogs, puppets and dolls

Why are we drawn to tech toys? 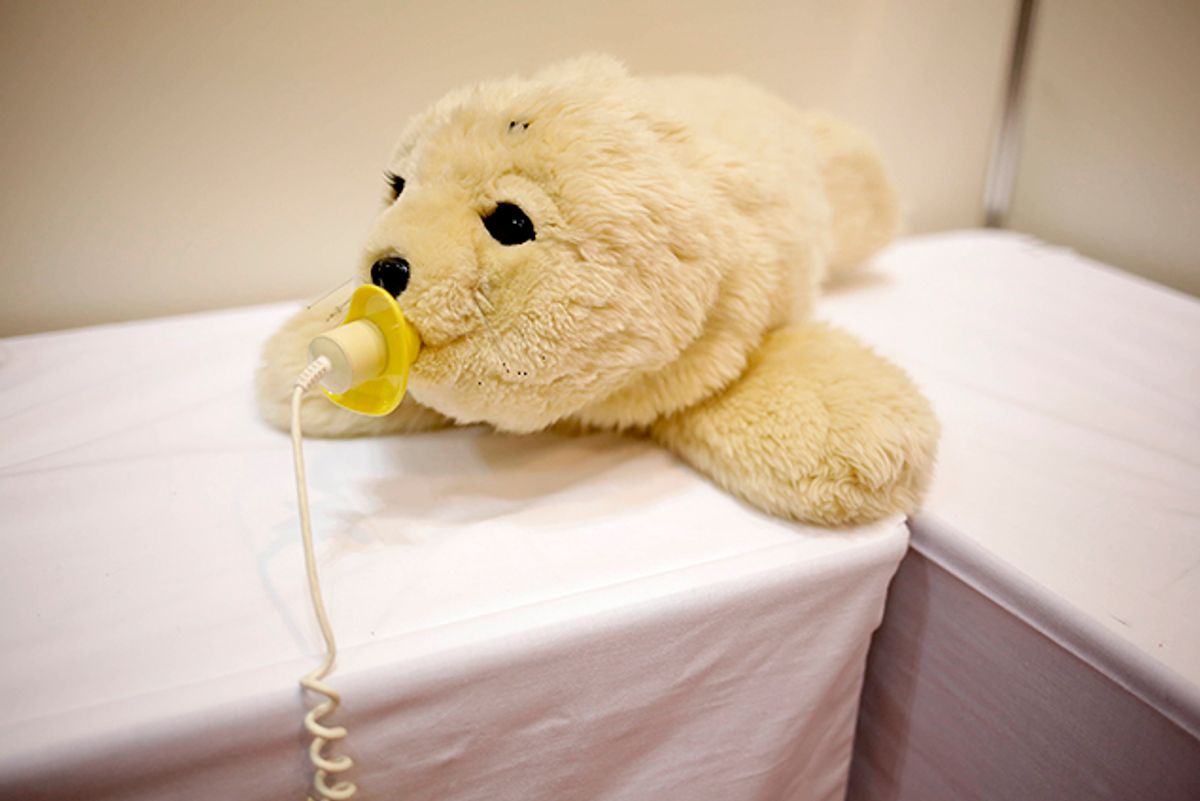 TOKYO, JAPAN - OCTOBER 19: The Comminicationa Robot 'Paro' for use in care homes and nursing homes during the Japan Robot Week 2016 at Tokyo Big Sight on October 19, 2016 in Tokyo, Japan. At this biennial event, the participating companies exhibit their latest service robotic technologies and components. (Photo by Taro Karibe/Getty Images) (Getty Images)
--

There’s a lot of hype around the release of Sony’s latest robotic dog. It’s called “aibo,” and is promoted as using artificial intelligence to respond to people looking at it, talking to it and touching it.

Japanese customers have already bought over 20,000 units, and it is expected to come to the U.S. before the holiday gift-buying season — at a price nearing US$3,000.

Why would anyone pay so much for a robotic dog?

My ongoing research suggests part of the attraction might be explained through humanity’s longstanding connection with various forms of puppets, religious icons, and other figurines, that I collectively call “dolls.”

These dolls, I argue, are embedded deep in our social and religious lives.

As part of the process of writing a “spiritual history of dolls,” I’ve returned to that ancient mythology of the Jewish, Christian and Muslim traditions where God formed the first human from the dirt of the earth, and then breathed life into the mud-creature.

Since that time, humans have attempted to do the same — metaphorically, mystically and scientifically — by fashioning raw materials into forms and figures that look like people.

As folklorist Adrienne Mayor explains in a recent study, “Gods and Robots,” such artificial creatures find their ways into the myths of several ancient cultures, in various ways.

Beyond the stories, people have made these figures part of their religious lives in the form of icons of the Virgin Mary and human-shaped votive objects.

In the late 19th century, dolls with a gramophone disc that could recite the Lord’s Prayer were produced on a mass scale. That was considered a playful way of teaching a child to be pious. In the Democratic Republic of Congo, certain spirits are believed to reside in figurines created by humans.

Across time and place, dolls have played a role in human affairs. In South Asia, dolls of various forms become ritually important during the great goddess festival Navaratri. Katsina dolls of the Hopi people allow them to create their own self-identity. And in the famed Javanese and Balinese Wayang — shadow puppet performances — mass audiences learn about a mythical past and its bearing on the present.

In the modern Western context, Barbie dolls and G.I. Joes have come to play an important role in children’s development. Barbie has been shown to have a negative impact on girls’ body images, while G.I. Joe has made many boys believe that they are important, powerful and that they can do great things.

What is at the root of our connection with dolls?

As I have argued in my earlier research, humans share a deep and ancient relationship with ordinary objects. When people create forms, they are participating in the ancient hominid practice of toolmaking. Tools have agricultural, domestic and communication uses, but they also help people think, feel, act and pray.

Dolls are a primary tool that humans have used for the spiritual and social dimensions of their lives.

They come to have a profound influence on humans. They help build religious connections, such as teaching children to pray, serving as a medium for answering prayers, providing protection and prompting healing.

They also model gender roles and teach people how to behave in society.

Aibo and other such technologies, I argue, play a similar role.

Part of aibo’s enchantment is that he appears to see, hear and respond to touch. In other words, the mechanical dog has an embodied intelligence, not unlike humans. One can quickly find videos of people being emotionally captivated by aibo because he has big eyes that “look” back at people, he cocks his head, seeming to hear, and he wags his tail when “petted” the right way.

Another such robot, PARO, a furry, seal-shaped machine that purrs and vibrates as it is stroked, has been shown to have a number of positive effects on elderly people, such as reducing anxiety, increasing social behaviors and counteracting loneliness.

Dolls can have a deep and lasting psychological impact on young people. Psychotherapist Laurel Wider, for example, became concerned about the gendered messages that her son was receiving in social settings about how boys were not supposed to cry or really show many feelings at all.

She then founded a new toy company to create dolls that could help nurture empathy in boys. As Wider says, these dolls are “like a peer, an equal, but also small enough, vulnerable enough, to where a child could also want to take care of him.”

Not everyone welcomes the influence these dolls have come to have on our lives. Critics of these dolls argue they outsource some of humanity’s most basic social skills. Humans, they argue, need other humans to teach them about gender norms, and provide companionship — not dolls and robots.

MIT’s Sherry Turkle, for example, somewhat famously dissents from the praise given to these mechanical imitations. Turkle has long been working at the human-machine interface. Over the years, she has become more skeptical about the roles we assign these mechanical tools.

When confronted with patients using PARO, she found herself “profoundly depressed” at society’s resort to machines as companions, when humans should be spending more time with other humans.

Teaching us to be humans?

It’s hard to disagree with Turkle’s concerns, but that’s not the point. What I argue is that as humans, we share a deep connection with such dolls. The new wave of dolls and robots are instrumental in motivating further questions about who we are as humans.

Given the technological advances, people are asking whether robots “can have feelings,” “be Jewish” or “make art.”

When people attempt to answer these questions, they must first reflect on what it means for humans to have feelings, be Jewish and make art.

Some academics go so far as to argue that humans have always been cyborgs, always a mixture of human biological bodies and technological parts.

As philosophers like Andy Clark have argued, “our tools are not just external props and aids, but they are deep and integral parts of the problem-solving systems we now identify as human intelligence.”

Technologies are not in competition with humans. In fact, technology is the divine breath, the animating, ensouling force of Homo sapiens. And, in my view, dolls are vital technological tools that find their way into devotional lives, workplaces and social spaces.

As we create, we are simultaneously being created.