Body count politics and the cost of lost history

The death toll will continue to climb as the World Trade Center health crisis grows; a full accounting is necessary 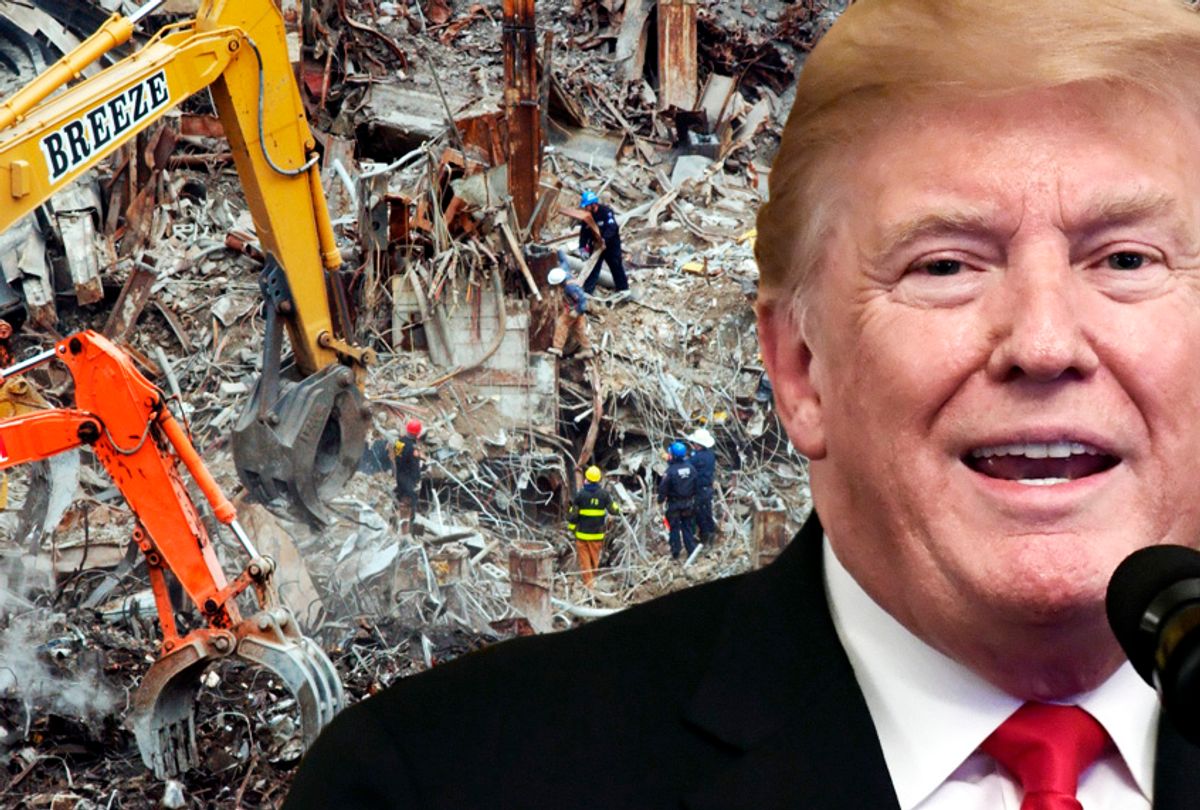 Workers remove debris in the rubble of the remains of the World Trade Center at ground zero. (AP/Susan Walsh/Louis Lanzano)
--

In the age of Trump we are seeing the shot at rehabilitation for the reputations of almost all our past Presidents, the living and the dead. Even President Nixon has gotten some residual redemption.

That can be a really slippery slope, especially if in the glare of Trump, the media  fails to examine our own history with an unflinching eye for detail and report the results out no matter how awful the findings.

We air brush our history. For instance, does  the corporate news media offer a running tally on the civilians killed and wounded post 9/11 in Iraq, Afghanistan, Pakistan, Libya, or Syria?

And we have our domestic body count blind spots as well.

READ MORE: The economics behind the prison strike: An inmate’s guide to earning 24 cents per hour

On the anniversary week of September 11th our Commander and Chief  was stuck staring in the rear view mirror, quibbling with an academic report on the  deaths on Puerto Rico from Hurricane Maria. That prompted the MSNBC "Morning Joe" crew to wax nostalgic for the way that President George W. Bush comported himself in the aftermath of the terrorist attacks by embracing the victims.

Ironically, on the week of the 9/11 anniversary when Trump was pummeled for rejecting the updated 3,000 death toll for  Puerto Rico’s Hurricane Maria, there was scant attention paid to the huge World Trade Center health crisis that deepens by the day.  And, nowhere in the mix was it recounted the central role that President Bush’s  EPA played in that crisis by publicly claiming falsely the air in lower Manhattan was safe to breathe in order to insure that Wall Street would be open for business.

In an early morning newscast on 9/11 National Public Radio merely reflected on the historic death toll from the day of the attack in their spot news. There was no mention in that item that thousands have died since from the WTC occupational exposures nor that 10,000 people have WTC cancers now and that by 2025 that number will be closer to 25,000.

Back in 2016 former New Jersey Governor and EPA Administrator Christie Todd Whitman issued her first ever apology in the Guardian newspaper for telling the world the air in lower Manhattan was safe to breathe after the Sept. 11 attack.

But in her interview Whitman denied she had ever lied about the air quality or known at the time it was dangerous. “Whatever we got wrong, we should acknowledge and people should be helped,” she said. “I’m very sorry that people are sick. I’m very sorry that people are dying and if the EPA and I in any way contributed to that, I’m sorry. We did the very best we could at the time with the knowledge we had.”

It is worth recalling that it was the EPA's own Inspector General in 2003 that found  Whitman and the agency  “did not have sufficient data and analyses to make the statement.”  In fact, the IG found that The White House Council on Environmental Quality inserted itself into EPA’s drafting of the ‘all-clear’ statement “when it convinced EPA to add reassuring statements and delete cautionary ones.”

Over a month after the attack EPA continued to gloss over the ambient air conditions and risks for lower Manhattan. “Data Confirms No Significant Public Health Risks; Rescue Crews and Nearby Residents Should Take Appropriate Precautions” read a press release sub-heading on Oct. 20, 2001. “While we have fortunately not found levels of contaminants that pose a significant health risk to the general public, our efforts to monitor the area and keep the public informed of our findings have not waned.”

Of course. the internal EPA paper trail tells another story. The IG found that even before the original September 18 EPA claim that the air was safe to breath, in over 25 percent of its own bulk dust samples asbestos was “above the 1 percent threshold used by EPA to indicate significant risk.”

“EPA’s early statement that the air was safe to breathe was incomplete in that it lacked necessary qualifications and thus was not supported by the data available at the time,” the Inspector General concluded. “Competing considerations, such as national security concerns and the desire to reopen Wall Street, also played a role in EPA’s air quality statements.”

So, why bring this all up now?  The answer is two fold. We can only learn from our mistakes if we own them and collective denial just makes it more likely we will repeat them. And, secondly there’s going to need to be a lot more money committed to the deepening World Trade Center health crisis and the fact the Federal government betrayed the public trust has to be part of the brief to make the case for that funding.

The dramatic spike in the volume of World Trade Center illnesses and claims has officials concerned that the $7.4 billion 9/11 Victims Compensation Fund may not have enough money to pay on all of the valid claims it receives  before it is slated to close in December of 2020.

“We do periodic assessments of our data,” VCF Special Master Rupa Bhattacharyya told the Daily News. “Looking at the data more recently I’m starting to get concerned.”

Most of the 90,000 first responders are in the health program but there are still several thousand that have not signed up. VCF, which is administered by the Department of Justice, has already paid out more than $4.2 billion to over 20,800 claimants.

Both first responders and survivors, individuals that lived or worked in lower Manhattan during the attack and clean up, are eligible to file a claim for both non economic losses and lost income, depending on their circumstance.

Several thousand claims are pending and VCF officials say claims take a year to 18 months to process. There is also an appeal process.

At the same time, the World Trade Center Health program had to open an additional ‘surge clinic’ this year to account for a 260 percent increase in program participants that lived and worked south of Canal Street and in Brooklyn Heights for the several months of the clean-up.

Public health officials estimate there are close to a half-million people that should be screened. Of the almost 400,000 civilian survivors just 17,000 have been screened so far, although that rate of participation has started to climb.

WTC clinicians note that with less than a quarter of the half-million people that were exposed on their radar there’s still a lot to learn.

Dr, Michael Crane, is the Medical Director of the Selikoff Centers for Occupational Health at The Mount Sinai Hospital and the WTC Health Program Clinical Center.

Dr. Crane said in an interview last year that he was concerned about what might be missed as long as three-quarters of those exposed to WTC toxins continued to avoid health screening. His concern was both for them individually, but also for the blanks it left on the WTC’s epidemiological map.

“My personal concern and my personal fear is that the family of cancers that are going to be highly prevalent in our population will be very, very rare ones, ones that are like usually ‘one in a million’ . . . concentrated in the people we have not seen yet and will never know about and will never be reported.”

But cancer is only one of a myriad of certified World Trade Center medical conditions.

Among the WTC Health program participants there are over 80,000 instances of conditions other than cancer, like asthma or gastroesophageal disease. As a consequence, WTC patients can suffer from multiple aliments which can have an impact on both the cost of their health care and the size of their VCF claim.

The James Zadroga 9/11 Health and Compensation Act, which created the World Trade Center Health program and  the 9/11 Victim’s Compensation Fund, was named for James Zadroga, an NYPD detective, who died from his WTC clean-up exposure (Zadroga’s hometown was North Arlington).

“We have coverage for health care,” Rep. Carolyn Maloney (D-NY), the lead sponsor of the Zadroga Act, said in an interview. “But the problem is in the compensation area with the death benefits, with taking care of the heroes and heroines, their families and taking care of them when they have lost their employment. We need more funds for that.”

The most enduring way to honor our 9/11 WTC dead is to care for the living.

This article originally appeared in InsiderNJ.