“Mark Burnett just went apeshit & choked me at this huge Emmy party then he ran away,” the actors tweets 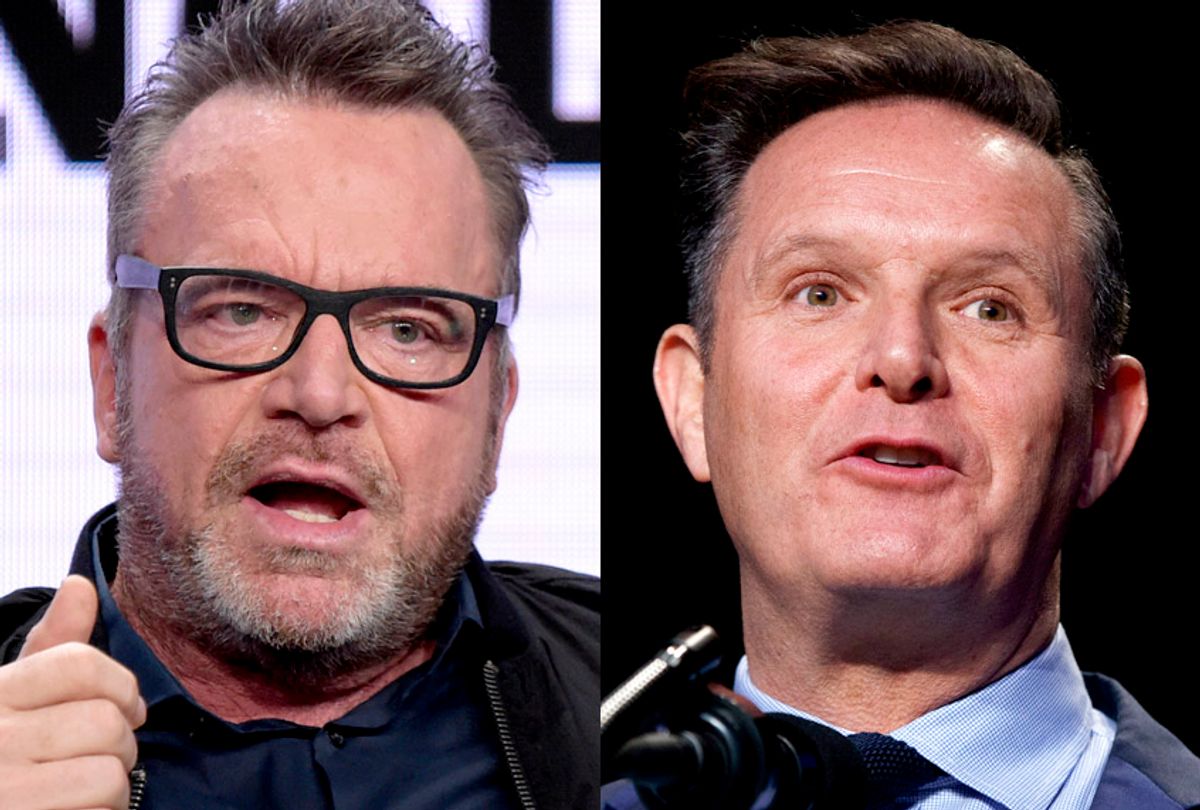 Tom Arnold has filed a police report for battery against "The Apprentice" producer Mark Burnett after the two scuffled at a pre-Emmys party Sunday night.

Arnold, who has long claimed that Burnett is harboring damning recordings of Donald Trump from "The Apprentice" tapings, tweeted about the altercation Sunday night.

“Mark Burnett just went apeshit & choked me at this huge Emmy party then he ran away with his torn Pink shirt & missing gold chain. I’m waiting for LAPD,” Arnold wrote.

Burnett’s wife Roma Downey tweeted that Arnold “tried to ambush” Burnett, to which Arnold replied, “Bullshit. You lie your crazy husband attacked me you psycho. I’m filing police report & suing you for defamation.”

A Los Angeles Police Department officer confirmed to CNN that Arnold did file a complaint Monday, the day before the actor’s "The Hunt for the Trump Tapes" — about Arnold’s dogged pursuit of the alleged “pee tape” and other unsavory footage — premieres on Viceland. The police report states that “the suspect [Burnett] unprovoked reached out and grabbed the victim by the throat and squeezed his throat. In self-defense, he fought back.”

Arnold told "The Hollywood Reporter" Monday that he and Burnett had their encounter on a stairway at Los Angeles’ Century Plaza Hotel.

“He’s getting closer, he’s super chesty, he’s breathing heavily,” Arnold said of Burnett. “Then he bumps into me. I could smell his fucking breath. He’s in my fucking face, psycho-eyed. I look at him eyeball-to-eyeball, like, ‘Are you fucking kidding me?

Arnold said Burnett then put his grabbed neck with a “kung-fu grip,” “So I tried to regain my balance. I’m like, ‘You better let me get my balance if we’re going to fucking fight, you cocksucker. You motherfucker.’ And I’m also having trouble getting my wind. All of a sudden I hear one of his buddies say, ‘Mark! Don’t choke him! Mark! Don’t choke!'”

In a recent Rolling Stone profile, Arnold reiterated that he confronted Burnett over the alleged "Apprentice" tapes; both Arnold and former contestant and White House aide Omarosa Manigault-Newman claimed that Trump used the “n-word.”

“[Burnett] goes, ‘Nothing is going to be worse than the grab-’em-by-the-pussy thing,’ ” Arnold said. “He goes, ‘Michael Cohen calls me every day. He wants all the tape. I won’t let him have it. I won’t let you have it.’ He holds up a picture of his kid as Trump’s ringbearer. ‘I can’t, mate.’”