Brett Kavanaugh is a blend of toxic male privilege and affluenza: A perfect fit for Donald Trump 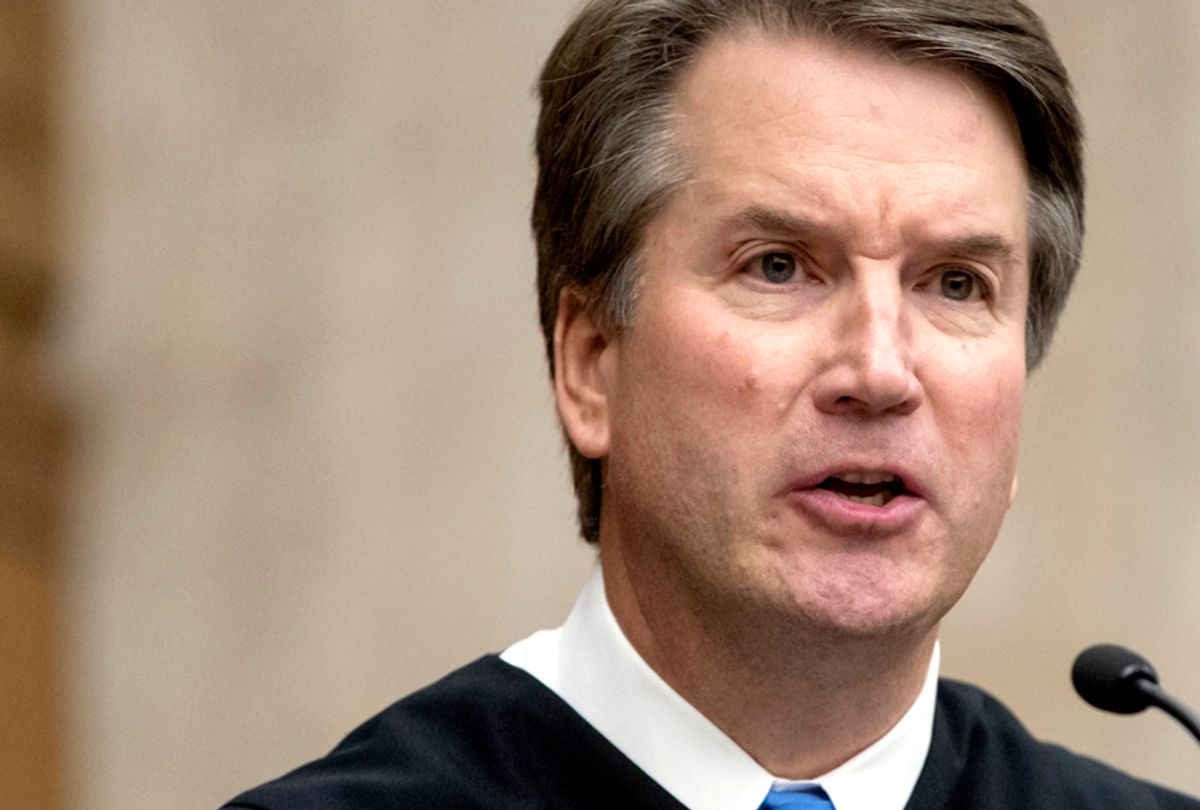 With the retirement of Justice Anthony Kennedy, President Donald Trump chose Brett Kavanaugh, a judge on the U.S. Circuit Court in the District of Columbia, as his replacement.

During his confirmation hearings, Kavanaugh has by some accounts committed perjury. (Even more plausibly, he has committed perjury during earlier confirmation hearings for the judicial post he now holds.) He has been less than forthcoming about his views on women's rights to control their own bodies, and whether those are being absolute and fully protected by the Constitution.

Kavanaugh's record also shows that he does not believe that the civil rights of black and brown people and other marginalized groups should be protected.

Predictably, Republicans have done everything in their power to prevent a full and proper accounting of Kavanaugh's record as a clerk and judge and what this signals about his likely decisions if confirmed to the country's highest court. Kavanaugh now faces a credible and serious accusation that, along with his friend Mark Judge, he committed an act of forcible sexual assault and attempted rape in the early 1980s, when both were in high school.

It was announced on Tuesday that Kavanaugh and his accuser, Christine Blasey Ford, who is now a psychology professor at Palo Alto University in California, will testify before the Senate Judiciary Committee about these accusations.

Of course, Republicans, conservatives and the right-wing media have rallied to Kavanaugh's defense.

Sen. Orrin Hatch of Utah told Bloomberg News that, "If that were true, I think it would be hard for senators not to consider who he is today. He has denied this and I feel bad that this happened to him."

Fox News commentator Ari Fleischer had this to say:

But high school behavior -- how much in society should any of us be held liable today when we lived a good life, an upstanding life by all accounts, and then something that maybe is an arguable issue took place in high school? Should that deny us chances later in life? Even for Supreme Court job, a presidency of the United States, or you name it. How accountable are we for high school actions, when this is clearly a disputable high school action? That’s a tough issue.

Conservative journalist Rod Dreher wrote on Twitter: "In high school, I was physically bullied by 17 y.o. boys, in a sexually humiliating way (but not sex). It affected the direction of my life. They never apologized. Still, I wouldn’t hold that against them if they were nominated for the Court. They were boys."

New York Times opinion editor Bari Weiss said on MSNBC: "What about the deeper, moral, cultural, like, the ethical question here? Let's say he did this exactly as she said. Should the fact that a 17-year-old, presumably very drunk kid, did this, should this be disqualifying?"

Fox News columnist Stephen Miller (not the White House official of the same name) went so far as to suggest that Brett Kavanaugh, Mark Judge and Christine Blasey Ford had been playing "seven minutes in heaven."

This effort by conservatives and Republicans to defend Brett Kavanaugh is a function of unadulterated, raw, unrestrained partisanship. It also demonstrates how today's Republican Party and conservative movement possess a deep contempt for women's freedom, autonomy, bodily integrity and full and equal human rights.

Ultimately, the defense of Kavanaugh by Republicans, conservatives, their media and public is a manifestation of America's rape culture -- the latter being neither "colorblind" or "race neutral."

When Kavanaugh's defenders make excuses for his alleged sexual assault and attempted rape of Christine Blasey Ford, they are endorsing and channeling white male privilege and toxic white masculinity. In America, these unearned advantages are the almost exclusive province of those who are white and male. This type of white entitlement is also amplified and exaggerated for rich, white, conservative heterosexual men.

Elite white men like Brett Kavanaugh (and of course Donald Trump) represent white male privilege and entitlement on steroids. If confirmed to the Supreme Court, Kavanaugh will be the White Male Privilege Affluenza Justice.

Almost by definition, black and brown boys and men are not allowed the protections and excuses afforded to men like Kavanaugh and Trump.

Black men and boys cannot hide behind folksy excuses that "boys will be boys" and cannot present attempted rape and other crimes as some type of "horseplay" or a "game" that they will "grow out of."

White boys are apparently engaging in "adolescent indiscretions" when they are accused of committing a crime. Black and brown boys are allowed no such safe harbor. We have heard it all this week: "He was just 17, and should not have his life ruined" or be "judged as an adult" for a mistake committed when he was young. These are the mantras and proclamations of white privilege. Negrophobia prevents such excuses and logic from being applied to black and brown boys and other young people. White men are infantilized in America; black boys and men are pathologized in America.

In American society to be black and young, even a child, is to be subjected to a cruel type of "adultification" that can often be lethal. Even when it isn't, it is nonetheless damaging and diminishing to one's health and humanity.

The examples are legion.

Tamir Rice was 12 years old when he was killed by Cleveland police. He was a child playing in a park with a toy gun. It took less than two seconds for the police to make the decision to shoot and kill him. The child Tamir was shown no compassion or mercy.

Michael Brown was 18 years old when he was street executed by Darren Wilson, a white police officer and an admitted racist, in Ferguson, Missouri.

Trayvon Martin was 17 years old when he was hunted down and killed by George Zimmerman in Sanford, Florida. Zimmerman would escape justice because of racist "stand your ground" laws that permit and encourage the killing of black and brown people by white vigilantes.

The Central Park Five, a group of black and Latino teenagers accused of raping and viciously beating a white women in 1989, were put on trial and found guilty. They spent years in prison before being exonerated in 2002. They sued the city of New York and were awarded tens of millions of dollars in damages. At the time of the crime, Donald Trump placed ads in several New York daily newspapers calling for them to receive the death penalty. He has never apologized or admitted he was wrong.

George Stinney Jr. was 14 years old in 1944, when he was convicted of murdering two white girls in South Carolina. A new trial and review of the evidence some 70 years later revealed that Stinney, like so many other black people in the Jim Crow South, was innocent of the crimes with which he was charged. That did not matter. He was convicted and executed within three months of his arrest. Stinney was so small that he had to sit on a Bible so that the electric chair could kill him.

Emmett Till was 14 years old in 1955, when he was accused of accosting a white woman. He was later kidnapped, tortured and mutilated and his body thrown in a Mississippi river. Till's body was found three days later. In a remarkable act of bravery, Till's mother insisted on an open-casket funeral so the world could see her child's horribly disfigured body. It was a galvanizing event for the black freedom struggle and one more example of how American bigotry and racism shamed the country before the world.

There are many other such examples. They are not disconnected anecdotes. They are indicative of a much larger problem in America.

Black teens and boys are much more likely to be suspended from school and subjected to other harsh punishments, as compared to whites in the same age group. This is the "school-to-prison pipeline" at work.

Black and brown youth are much more likely than white youth to be imprisoned in juvenile correction facilities.

Black youth are five times more likely than whites to be incarcerated. This is not because black young people commit more crimes but rather because of how they are over-policed and subjected to surveillance. This also reflects the fact that black people as a group receive harsher punishments for the same crimes, as compared to white Americans.

Social psychologists and other researchers have repeatedly found that black children are consistently viewed by whites (and some others) as being older than they actually are. This reflects a broader cultural problem where the lives of black and brown children and other young people are deemed to be less valuable than those of whites.

Donald Trump has shown an utter disdain and contempt for the rule of law. Brett Kavanaugh's nomination to the Supreme Court is best understood as part of Trump's assault on American democracy. A president who has bragged about assaulting women has now offered a lifelong appointment to the highest court in the land to a man accused of the same thing. This is another stain on one of our country's most esteemed and respected political institutions.