Kavanaugh is this generation's Clarence Thomas, so how will the senate respond?

Brett Kavanaugh will also be angry, bitter, and resentful if he reaches the Supreme Court 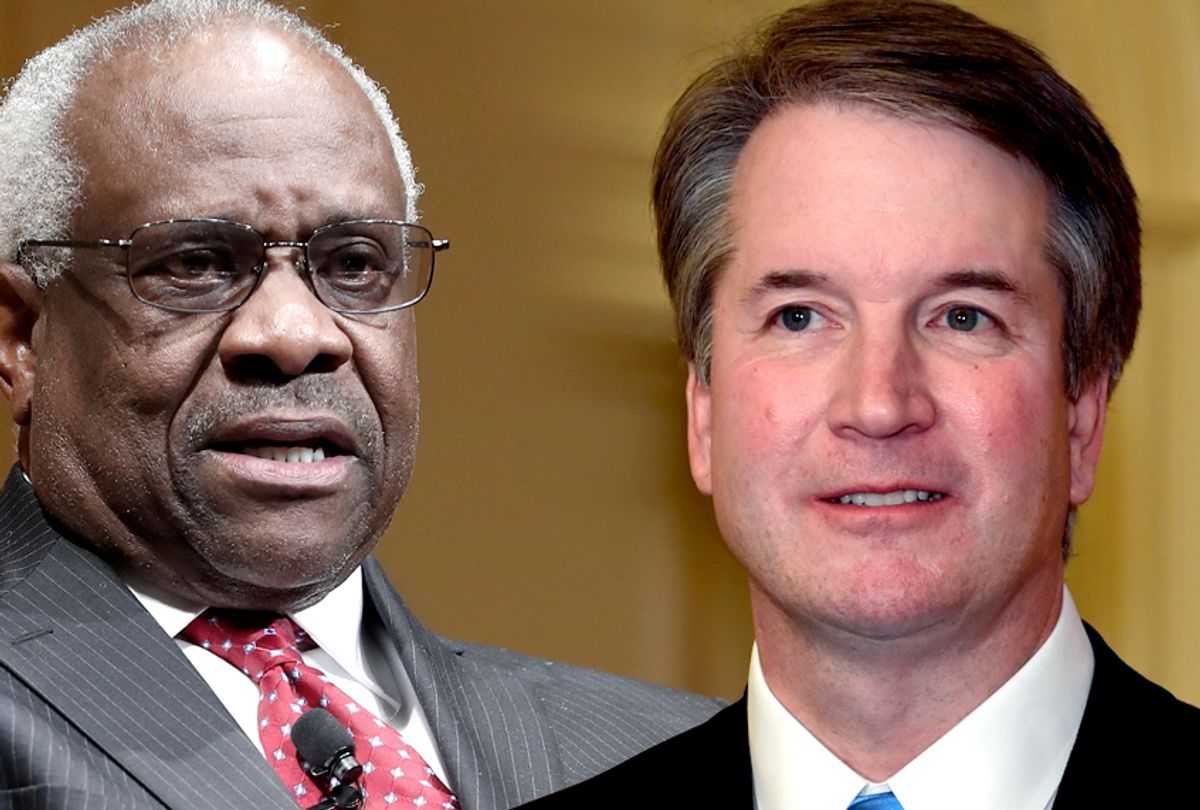 This is what is at stake: we’ll have a second Clarence Thomas on the Supreme Court if prep-monster Brett Kavanaugh is confirmed by the Senate. Another abusive man who will take his seat on the court having been caught out in public during his nomination, he'll be just as angry and embittered as Thomas was after he got on the court.

Thomas didn’t blame himself for having sexually harassed Anita Hill and other women. He blamed the Senate Judiciary Committee for calling him out on his actions, calling his confirmation hearing “a high-tech lynching.”

Neither will Kavanaugh blame himself for the assault he committed on Christine Blasey Ford at a party in high school, when he was 17 and she was 15. He’s already told the world in a 2015 speech to the Columbus School of Law that his school slogan, “What happens at Georgetown Prep, stays at Georgetown Prep . . . has been a good thing for all of us, I think.” He'll blame Democrats, liberals, and most especially, women for the humiliation he will suffer next week if he testifies in the follow-up hearing that Republicans hastily called for Monday.

He’ll carry the memory of the humiliation he has already suffered onto the court if he’s confirmed. Kavanaugh’s arch-conservative positions will harden into obsidian, the dark glass through which he will see every case brought before him. Just as Clarence Thomas has done before him, he will take out his resentments and bitterness on women, on workers, on voters, on immigrants, on African Americans and Latino Americans, on anyone coming before the court seeking relief from the power of men, corporations, and the state. His voting record will be almost indistinguishable from Thomas', which in case you've forgotten, was further to the right on many issues than that of  Thomas’ friend mentor, Antonin Scalia.

Conservatives have spent the last four decades trying to turn the Supreme Court into a rubber stamp for their dream agenda, in which the rights and privileges of white men are protected from the changing demographics of an America that is becoming blacker and browner by the day. The rights of women and minorities don’t matter to the conservative eleven white Republican men whose votes control the committee. All that matters to them is that white men are protected.

President Trump made his support for their agenda crystal clear on Wednesday morning when he expressed his support for Kavanaugh this way: “He’s such an outstanding man, it’s very hard for me to imagine that anything happened.”.Kavanaugh is a man, so naturally, nothing said by a woman can be believed.

It is likely that should Kavanaugh be confirmed, Clarence Thomas will become his chief friend and mentor on the court, just as Scalia did with Thomas. They are both Yale Law School grads, and they’ll bond as misunderstood, mistreated soul brothers in the fraternity of the wrongfully accused, fellow victims who endured storms of feminist anger and opposition to their nominations.

The hearings for Thomas’ nomination to the court are a useful guide to what is likely to happen next week. Just as Kavanaugh is Trump’s second opportunity to appoint a justice to the court, Thomas was President Bush’s second appointment. When Justice William Brennan stepped down in 1990, Thomas was on Bush’s shortlist, but he appointed Stephen Breyer instead.

When Justice Thurgood Marshall, the court’s first black justice, stepped down in 1991, Bush appointed Clarence Thomas. Thomas was opposed by civil rights and liberal groups who were concerned that a liberal stalwart like Marshall was being replaced by someone as conservative as Thomas. He answered questions on Roe v Wade by stating, incredibly, that he hadn’t formed an opinion on that landmark decision and hadn’t really thought about it.

Still, Thomas appeared to be on a path to a fairly easy confirmation vote when NPR court reporter Nina Totenberg was given a secret FBI report that quoted Oklahoma University Law Professor Anita Hill as saying that Thomas had made inappropriate sexual comments to her when they worked together at the Department of Education and at the Equal Opportunity Employment Commission. Hill was called before the committee to testify on the character of Thomas to serve on the Supreme Court.

What followed was a high-tech lynching not of Thomas, but of Anita Hill. She was repeatedly denigrated by members of the committee from both parties, which was all male and all white. The Judiciary Committee included then, as it does now, Republican Senators Charles Grassley and Orrin Hatch. The Senator from Utah was particularly cruel with Hill, saying that her testimony was a lie in its entirety. He accused her of taking her story about Thomas and the pubic hair on the Coke can story from the novel, The Exorcist. "How would any intelligent male who would want to date a woman say things like she alleges?" said Hatch. Hill had testified that Thomas was constantly asking her out on dates, “And she claims he was trying to seduce her with language like that."

When Thomas testified, he issued a blanket denial of Anita Hill’s entire testimony. Kavanaugh has already issued a similar denial of the charge made by his accuser, Christine Blasey Ford, who has alleged that Kavanaugh sexually assaulted her at a party when she was 15 and he was 17.

In their blanket denials, Thomas and Kavanaugh have echoed the advice Trump was quoted as giving a friend facing allegations about “bad behavior towards women,” “You’ve got to deny, deny, deny and push back on these women,” he said.“If you admit to anything and any culpability, then you’re dead.” according to Bob Woodward’s new book, “Fear: Trump in the White House,” Trump concluded his advice this way: “You’ve got to deny anything that’s said about you. Never admit.”

Thomas survived the testimony of Anita Hill and was barely confirmed by a 52-48 vote in the Senate. Hatch and Grassley were mighty pleased: “I think he’s writing some of the best opinions on the Court right now,” Hatch told the National Review on the 20th anniversary of Thomas’ confirmation. “I hope he stays on there till he’s 95 years old,” Grassley crowed.

Hatch and Grassley have every cause to be pleased by Thomas’ time on the court, which is why they’re pushing so hard for Kavanaugh. He has been a reliable vote in favor of restrictions on abortion and would obviously vote to overturn Roe if that case ever came before the court. He has voted repeatedly to overturn Federal statutes, while voting just as often to uphold “states rights.” He voted to strip the Voting Rights Act of its enforcement powers in Shelby County v Holder. He has voted repeatedly against civil rights, holding in Gratz v Bollinger that "a State's use of racial discrimination in higher education admissions is categorically prohibited by the Equal Protection Clause." That would be the 14th Amendment, the one which granted citizenship to freed slaves and stated for the first time that everyone enjoys “equal protection of the laws.”

Thomas voted against gay rights in Lawrence v Texas, and against the rights of gay Americans to marry in Obergefell v Hodges. He wrote dissents in both cases. He was joined in his dissent in the gay marriage case by his vote-buddy Scalia. They argued that the only liberty granted by the Due Process Clause was freedom from “physical restraint,” and said that liberty should be understood only as “freedom from governmental action, not as a right to a particular governmental entitlement" such as the right to be married.

This is what we’ve got to look forward to if prep-monster Brett Kavanaugh is confirmed to be an associate justice of the Supreme Court.  Yet another bitter, resentful man who faced charges of a sexual nature brought by a woman from his past against him. Yet another man chomping at the bit to vote against the rights of minorities, women, workers, in short, anyone who isn’t just like him: an entitled, privileged male of the species who has been coddled and groomed by the Republican Party to get him right where he is today.

The Republican party loves these guys:

Thomas is a serial sexual harasser who was coarse and ugly to the women who worked for him. And Republicans love him.

Kavanaugh has been accused of being a sexual predator who attacked a young girl and tried to rape her. And Republicans love him.

Roy Moore has been accused of being a serial pedophile who as an adult in his 30s pursued multiple underage girls. And Republicans love him.

Donald Trump is a sexual predator who has bragged about his sexual harassment of women. And the Republicans love him.