Whatever the truth of the Kavanaugh accusations, the right's anti-choice ideology was never about "family values" 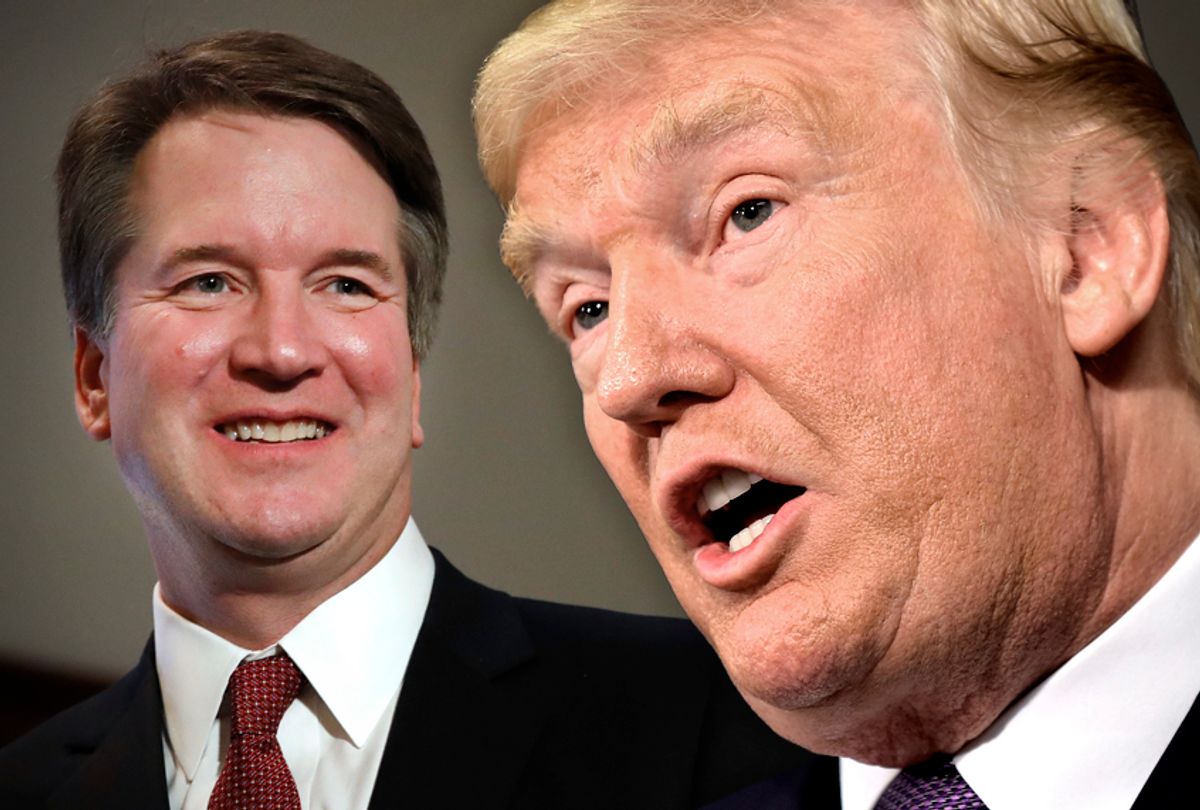 In the decade-plus that I've been a writer of well-known women's-libber inclinations, my fellow ladies against misogyny and I have grown used to the common accusation that feminism is a conspiracy theory. Anti-feminists have long characterized discourse about male dominance — especially if it involves that dreaded word "patriarchy" — as mere paranoia. Men, they smugly tell us, are not plotting against you, and only hysterical bimbos would say otherwise.

The typical response to this, from feminists, is to get academic and explain that there's a difference between criticizing social systems and promulgating conspiracy theories. But after a month of sleaze collecting around the confirmation process for Brett Kavanaugh, Donald Trump's current nominee to the Supreme Court, it appears such verbose, intellectual responses are no longer necessary. Men, it would seem, are plotting against us.

OK, OK, to be fair: Not all men and not just men. But watching the Republican propaganda machine swiftly and smoothly move all the pieces into place this week to railroad Christine Blasey Ford — the woman who has accused Kavanaugh of attempting to rape her in high school — it's clear that, if anything, feminists were downplaying how well-organized and conspiratorial the agents of patriarchy really are.

But unlike the shadowy figures of conspiracy theories, the men working against women's rights and women's equality don't even try to hide who they are. Sure, they may make mouth-noises about not intending to strip women of reproductive rights and about how much they want to hear out rape accusers, but they're not really concealing their true intentions. The plot is being rubbed in our faces, with every crack about pro-choice protesters or claim that there is no need for an independent investigation of Ford's accusation.

One can hope, at least, that this past month will help demolish the myth, built up after decades of bad faith posturing, that anti-abortion forces are motivated by anything but a desire to oppress women. Sure, some people are still capable of expressing surprise that the most ostentatiously Christian factions of the American right were swift to line up behind an accused sexual assailant. After all, there are many of people, in the media and elsewhere, whose desperation to believe in the reality of conservative Christian virtue causes them to ignore an overwhelming amount of contrary evidence.

But it's going to take a lot of cognitive dissonance, after this month, to keep on believing in the myth that anti-abortion ideology is about "life" or "chastity" or "family" or anything but what it's really about, which is misogyny.

Republicans have invested a lot of resources into building up the myth of the good-hearted Christian man whose anti-choice views are rooted in a devotion to family values and sexual morality, rather than in hostility to women and a naked desire for domination over women's bodies. While some alt-right men in recent years have pushed back against this myth, preferring to embrace a lad-mag version of masculinity that is overtly piggish, the conservative movement in general has long understood that it's easier to sell their worldview if it's seen as prudish instead of violently misogynist. Taking away women's rights was often even packaged as a form of chivalry, a way to protect the delicate ladies from the harsh world of sexuality.

The mask slipped occasionally, such as when former Rep. Todd Akin threw away his chance at a Senate seat by suggesting that "legitimate rape" didn't result in unwanted pregnancy. But mostly it was just too uncomfortable to admit that leading Republicans straight-up want to oppress women, so we signed onto this collective myth-making where they pretend to be good men who are just sentimental and prudish when it comes to sexual matters, and we pretend to believe them.

There's something darkly funny, in the wake of the attempted rape allegation against Kavanaugh, in the astonished tone of the coverage of the various revelations of his past. He was in one of the grossest fraternities at Yale, which made initiates march around under a flag made of bras and panties during his time there! He was also in an all-male club nicknamed "Tit and Clit"! Those female law clerks he hired, the ones we heard so much about during the confirmation hearing, were told that to get hired, they needed a "certain look" and an "outgoing" demeanor! His buddy, the guy who was in the room with him during the alleged assault, is a gross creep with a long history of horny writing concealed as Catholic piety, as well as diatribes insinuating that women are asking for sexual violence.

I guess some people really are surprised. Republican propaganda bolstering the Boy Scout image of their leaders has been effective, even after they nominated and elected a president who has literally bragged about how he likes to "grab them by the pussy." They shouldn't be. There were plenty of hints during the Kavanaugh hearings that he has a high comfort level with the leering frat boy mentality, and not just because he took the job from Trump. For instance, there are the White House emails that Republican senators tried to suppress, in which Kavanaugh's buddy jokes "you may be hoping that I've lined up a hostess for a rub-n-tug massage session" and Kavanaugh, at age 36, reminds his friends to be "very, very vigilant w/r/t confidentiality on all issues and all fronts, including with spouses."

Nor should people be surprised at the collective shrug coming from the Republican members of the Senate, or the multitude of boys-will-be-boys excuses coming from the right-wing punditry. They've known all along that the pious-Christian-man-who-respects-women thing was all an act. They also expect, when the dust settles from all this, that everyone will return to pretending to believe in it again.

We can only hope that won't happen, because what this month has revealed — and what the election of Donald Trump should have revealed two years ago — is that the war on reproductive rights is about keeping women as second-class citizens. Straight men get to have sex; conservatives are fine with it. Men can have mistresses, and in some cases pay for sex, and it's a laugh. Men can even commit acts of sexual violence (again, if they're straight) and excuses will be offered. Harsh punishments — denial of health care, forced childbirth — are aimed at women not because of a desire for white picket-fence wholesomeness and a protective attitude toward the fairer sex, but simply to keep women in their place.

This is what conservative sexual morality has always been about: Using the sexual double standard to enshrine male power over women. This time, let's not give into the pressure to pretend it's about anything else.