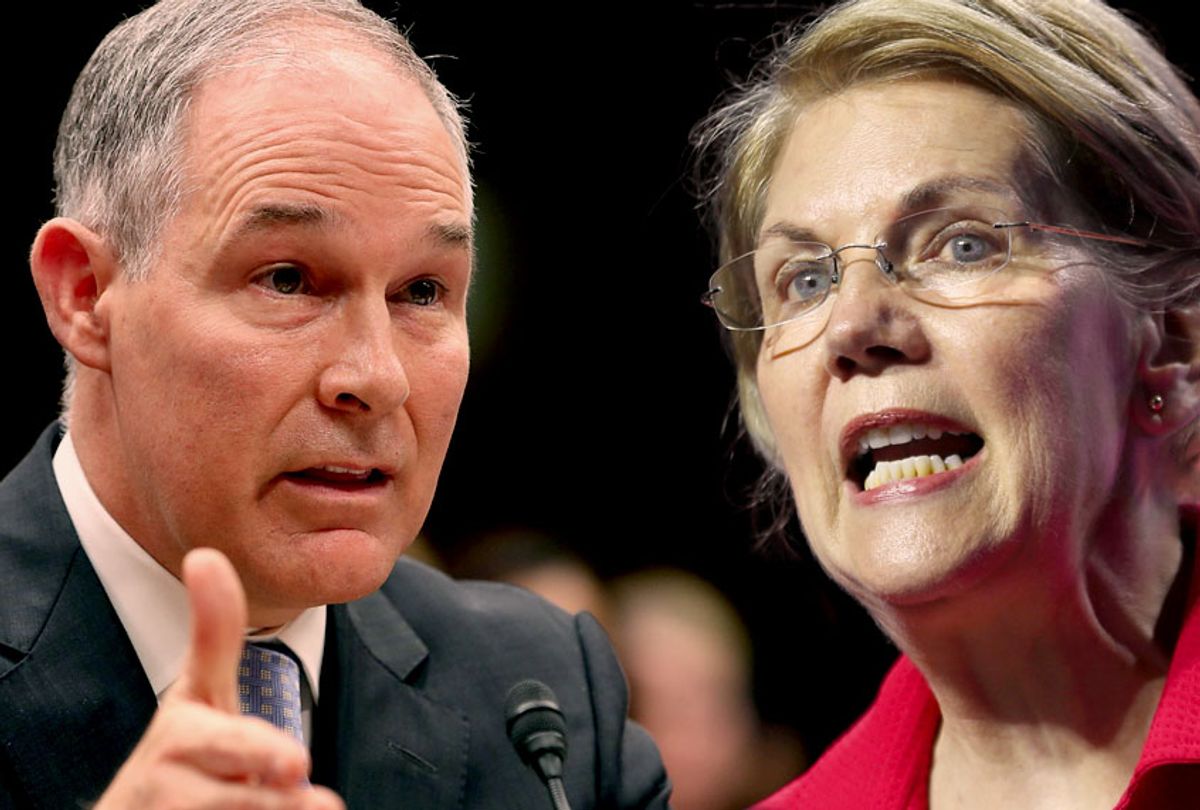 Scott Pruitt may be gone as head of the EPA, after multiple accusations that he exploited his office for financial gain. But he isn't done profiting off his role as the point man on Donald Trump's efforts to destroy environmental regulation. Last week, the New York Times reported that Pruitt is making plans to start a new consulting firm -- and his first client is likely to be  Joseph W. Craft III, a coal baron whose lobbying of the EPA during Pruitt's short stint at the agency involved at least seven personal meetings in 14 months.

The story exposes the flimsiness of the "ethics pledge" the Trump administration has imposed on political appointees. The pledge supposedly requires Pruitt to avoid direct lobbying to the EPA on behalf of his client, but it's likely that his purpose at the new firm will be to support and shape such lobbying efforts.

“Throughout his career, Scott Pruitt has sold out the health of the public to appease corporate polluters, and now he is cashing in," said John Coequyt, global climate policy director of the Sierra Club, the organization that exposed Pruitt's corruption in the first place. "It’s a pattern we have seen far too many times in the Trump Administration, as positions of influence are exploited for personal gain and the taxpayer is on the hook with their money, their health and their safety."

Of course, Pruitt's story isn't surprising. Many political commentators predicted this would happen as soon as he was forced out of office, especially since the Trump administration has been especially flagrant about letting members put their hands in the cookie jar. Trump himself has clearly used his presidency to generate cash, shamelessly leveraging his private clubs and hotels as places where wealthy people can spend lavishly, with an obvious eye towards buying favorable treatment. As ProPublica reported in May, at least six former administration officials who swore they would not go into lobbying for five years after leaving government service have already become registered lobbyists.

But this very revolving-door corruption is raising hopes in some circles that political momentum can be built towards passing legislation to curtail it.

“The Trump administration’s complete disregard for ethical norms shows we need big, bold solutions to try to close many of these loopholes that the  administration employs and former officials are exploiting," Aaron Scherb, director of legislative affairs at Common Cause, told Salon.

"To be very candid, I think that in some ways, the Trump way of viewing the world, i.e., having no regard for ethical boundaries, made the prospect of serving in his administration very appealing to Scott Pruitt and people like him," said Rep. John Sarbanes, a Democrat from Maryland.

“You can look at almost any agency in the Trump administration. They lock the doors. They pull down the shades," Sarbanes continued. "And then they invite in the very industries that they’re supposed to regulate and have them clean out of the shelves of the regulations that are supposed to protect the American people and basically have their way with that particular agency."

Democrats in both the House and the Senate have responded by pushing for legislation that would prevent a number of the current abuses. Sarbanes is leading an effort to pass a resolution calling for extensive reforms, including passing laws that would prevent government officials from going straight into lobbying -- and would also prevent lobbyists from going straight into government.

One proposal on that front is the Ethics in Public Service Act, which would codify an ethics pledge signed by members of the Obama administration, which Scherb said "had a number of good provisions" and was replaced under Trump by one that the one "was significantly weaker in some ways" (and has been blatantly ignored by many people who have left the administration).

“It specifically codifies the rules so that each administration can’t create their own standards," explained Rep. Brad Schneider, the Illinois Democrat who introduced the bill. "What we hopefully do is make it harder for someone to hide the ball, to say they aren’t a lobbyist even though they are contacting their previous agency."

Perhaps even bolder is a solution proposed by Sen. Elizabeth Warren of Massachusetts, called the Anti-Corruption and Public Integrity Act. Her bill includes a lifetime ban on Cabinet appointees, like Pruitt, accepting lobbying jobs and imposes a lengthy "cooling off" period for other federal employees.

"There’s no real question that the Trump era has given us the most nakedly corrupt leadership this nation has seen in our lifetimes," Warren said at a recent National Press Club event. She added that Trump, however, is "not the cause of the rot" and that the "cancer" of public corruption is widespread and "Washington’s got it bad."

And while there might be some wiggle room in other proposals for what Pruitt is doing — which is to claim that his job is not lobbying, even though he walked directly into an industry he was recently responsible for regulating — Warren's bill has provisions that Scherb said "would specifically bar" the kind of loophole-carving that Pruitt is engaged in.

Specifically, there's a provision in the bill barring any organization, for one year, from hiring any senior government official who worked in an agency the organization has lobbied in the past two years. In other words, all those meetings that Pruitt had with Craft while he worked for the EPA would mean Craft couldn't pay Pruitt a dime — even to mow his lawn — for an entire year. Considering how grabby Pruitt's records showed him to be, that's likely longer than Pruitt wants to wait to cash in.

This issue is about more than making sure that government officials don't get greedy. There's a pragmatic issue at stake too, which is that this kind of corruption can shape government policies that directly affect ordinary people's lives.

The EPA, Sarbanes noted, is supposed to base decisions "on science and due diligence," but when the agency is "captured by the very industry that you’re supposed to regulate," then it's in a position to "run interference on that effort from beginning to end." Even if industry captains don't overtly dangle the promises of cushy jobs for bureaucratic leaders, the knowledge that such jobs are potentially out there waiting for those who do what the industry likes could clearly influence decision-making. In the case of a clearly corrupt official like Pruitt, who soundproofed his EPA office, we can't even be sure that overt conversations about quid pro quo didn't happen.

It's probably too late to keep the members of the Trump administration from using their power to line their pockets. But as Warren notes, this is a widespread problem that has definitely implicated members of both parties. With the Trump administration setting new standards daily for dangerous Washington corruption, there may finally be enough political pressure on Democrats to do something about it when (and if) they get back in power.