Oktoberfest means wine in Franconia, the enchanting German region you don't know yet

In Franconia, a millenia-old winemaking tradition means that instead of hops and malt, grapes are top of mind 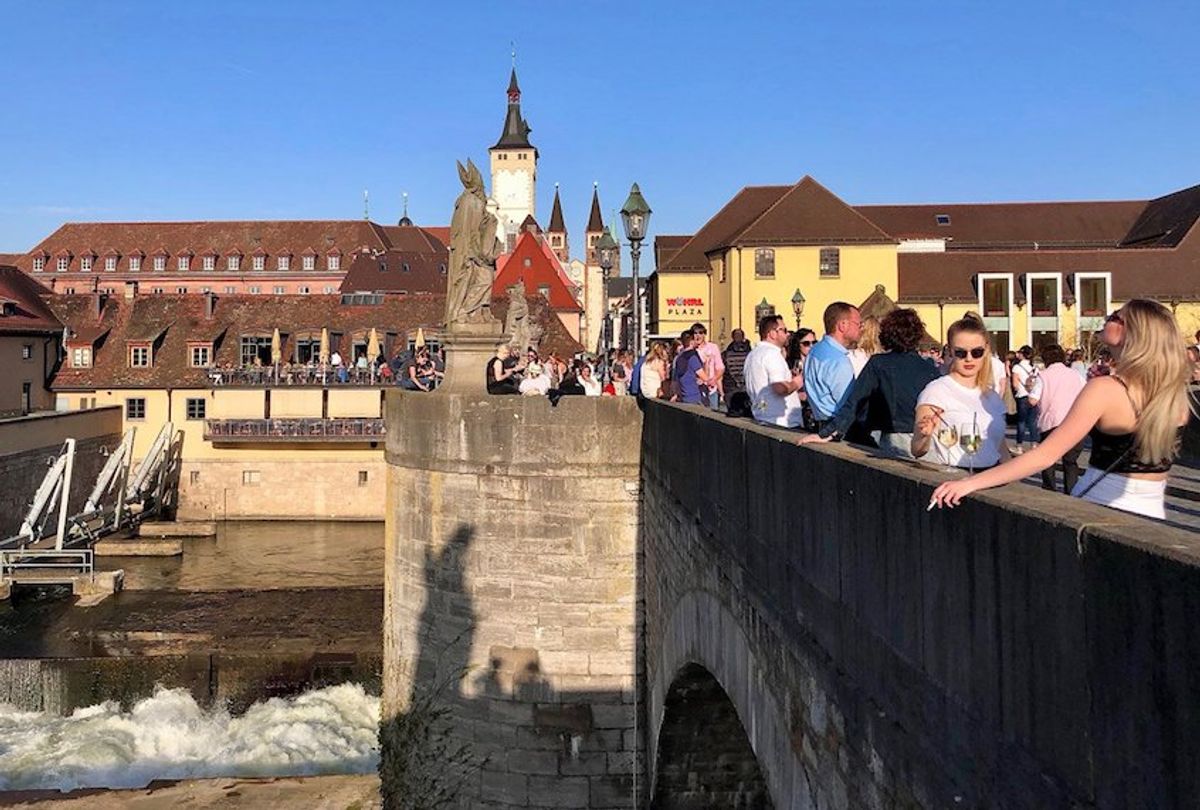 As the sun goes down, Würzburgers flock to the Old Main Bridge for a happy hour drink. (Photo by Paul Jebara / Fathom)
--

BAVARIA, Germany — At the mention of Bavaria, do you think of lederhosen-wearing, beer-guzzling folks celebrating Oktoberfest in perpetuity? It may be a borderline stereotype, but one thing is right: The Germans do love their beer. But in Franconia, a culturally distinct region that historically resisted Bavaria's authority but reluctantly joined the state in the 1800s, a millenia-old winemaking tradition means that instead of hops and malt, grapes are top of mind. The distinction is apparent when cheersing a tipple: Instead of saying "prost," Franconian wine drinkers clink glasses with a more formal "zum wohl" — to your health.

As far as German wines go, riesling owns the throne based on popularity and production. But not here. Franconia's terroir has been producing some of the country's best, if lesser-known varietals, overwhelmingly favoring whites. Among the whites that make up 80 percent of total production, the star is silvaner, a dry varietal that thrives in the area's limestone soil. It's very friendly to the palate — not too aromatic, not too acidic — a white that Goldilocks would keep in her cellar.

Another unmistakable indicator of a Franconian wine is the bottle in which its stored: the stout and curvaceous bocksbeutel, which has been used since before the Middle Ages. With wineries outnumbering breweries in and around Franconia's fairytale towns, there's no better way to explore this part of Germany than with a glass in hand. 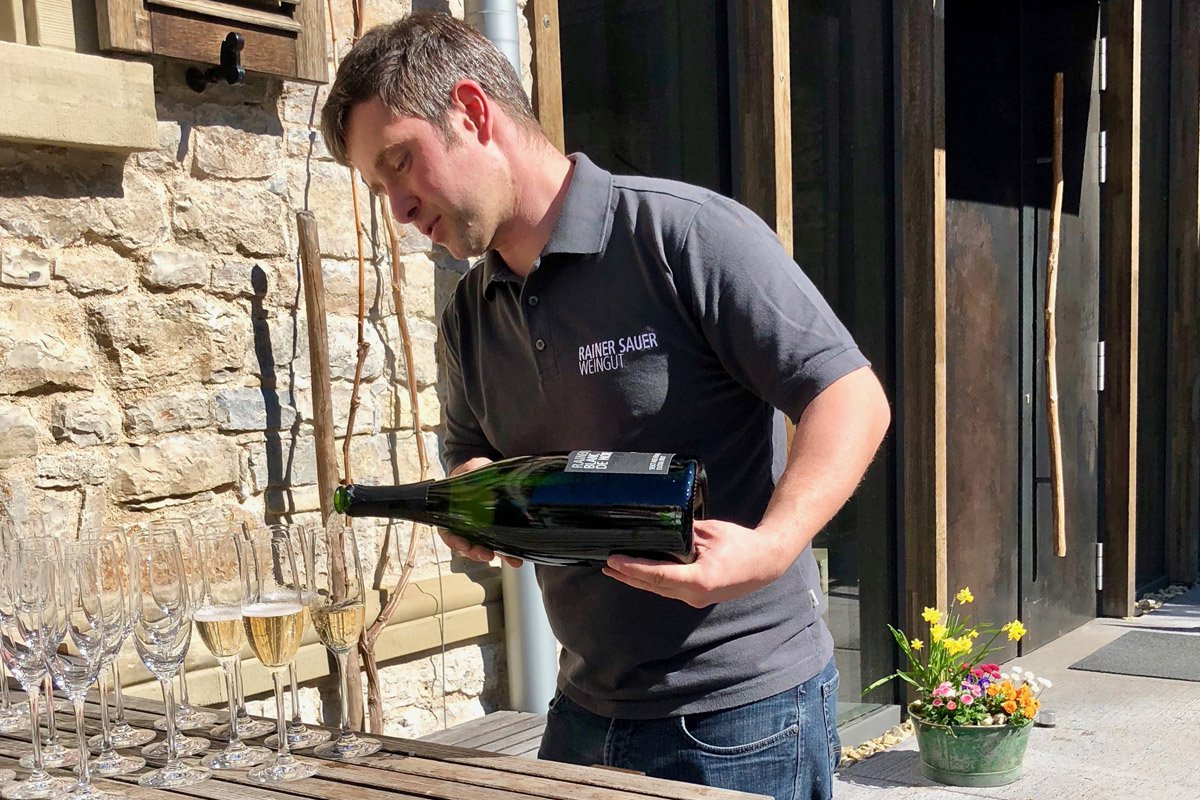 Pop a Cork in Würzburg

Würzburg, the official capital of Lower Franconia and the unofficial capital of the region's winemaking industry, is the ideal base for exploring (and drinking) Franconia's best. Rebuilt to its former glory after being 90 percent destroyed after World War II, Würzburg is an incredibly lively university town that's so charming, it marks the beginning of Germany's famed Romantic Road.

Stay at the Best Western Premier Hotel Rebstock, which, despite its Best Western name, is an impressive bit of local history: One of the oldest hotels in all of Germany, the Rococo building has been a guest house since 1408. The location couldn't be better: less than a ten-minute walk to Alte Mainbrücke, the pedestrian Old Main Bridge that summons the whole town for an alfresco drink on warm afternoons. This is happy hour at golden hour — and the perfect place to watch the sun go down with students, families, and tourists alike. Head to any bar that surrounds the bridge to borrow a glass that can be refilled and returned at your leisure. 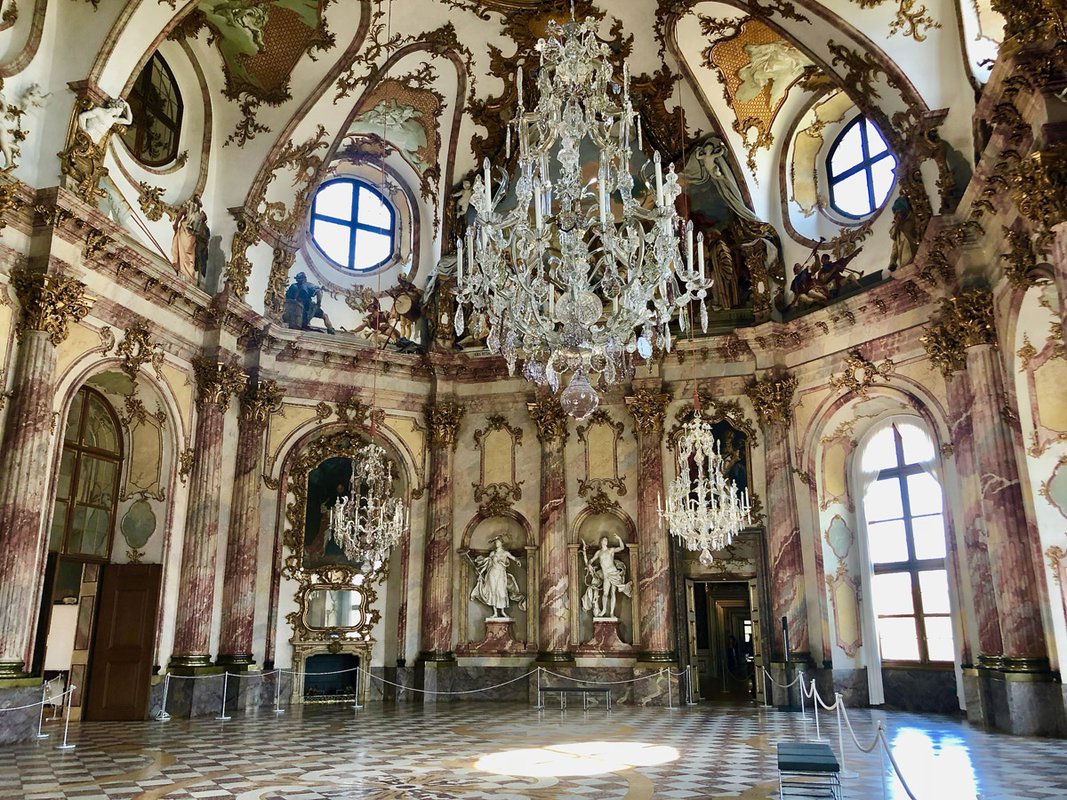 While sipping your silvaner riverside, look around and you'll see vineyards near and far, even covering the slopes leading up to the massive Marienberg Fortress, which dates back to the 8th century. The view from atop the fortress is pretty outstanding, offering an unparalleled panorama of Würzburg from its east-facing garden. But Würzburg's most prized treasure is Würzburg Residenz, a UNESCO World Heritage Site and true architectural masterpiece. Modeled after Versailles, its exterior is a superior example of French chateau style, but its interior mesmerizes with Baroque and Rococo elements, floor-to-ceiling, wall-to-wall. Marvel at the grand staircase, its steps leading you towards the largest ceiling fresco in the world, completed by Venetian master Giovanni Battista Tiepolo. Each room inside the Residenz is overwhelmingly spectacular, but it's underneath this opulent palace where you can find the wine. And that's what we're here for, right? 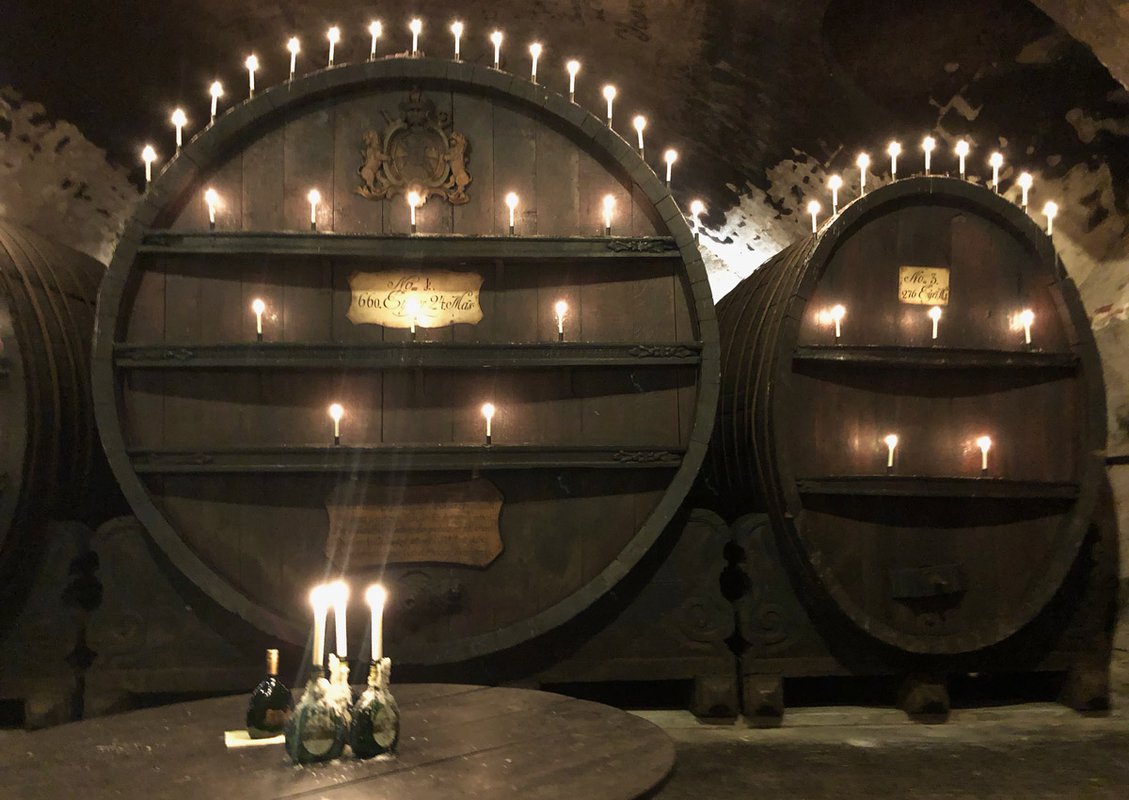 Find out more about Würzburger wine history down the street at Juliusspital, a working hospital and foundation whose operations have been financed by its eponymous winery — the second largest in Germany — since 1573. Tour the Baroque pavilion and gardens before stopping by the wine shop for a bottle or three.

Würzburg may be the wine capital of Franconia, but the some of region's most excellent wines are found along the Main River to the east. Rent a car and design your own wine tour, or join the hikers and cyclists in the warmer months who make multiple stops for a schoppen (a glass of wine) along their route. 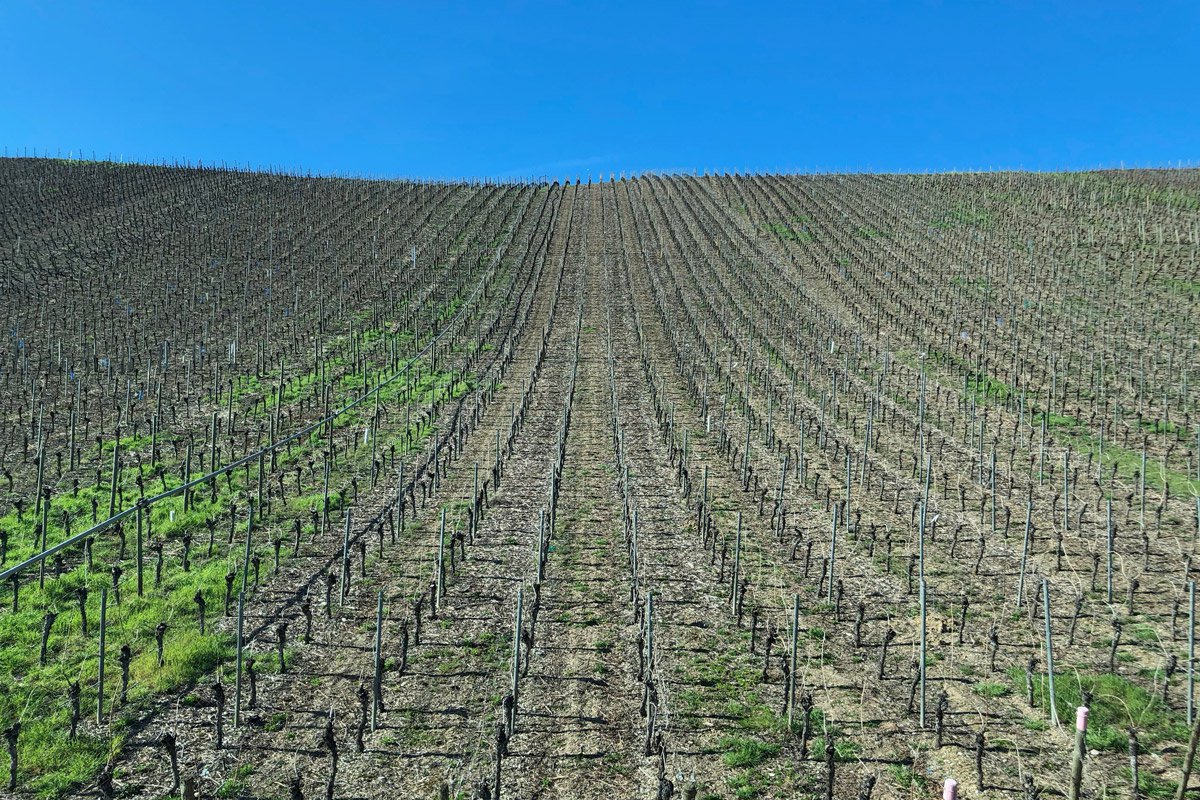 Some of Franconia's ultra-steep vineyards require harnesses to harvest the grapes. Photo by Paul Jebara.[/caption]

Driving through the rolling hills of Franconian wine country, you'll pass vineyards so steep, they're almost pressed up against your car window. Near the town of Volkach is Rainer Sauer Weingut. It's run by second-generation winemaker Daniel Sauer, who declares that some parts of his vineyard are so steep that grape pickers must be harnessed in to do their job. Rainer Sauer produces fantastic silvaner, especially their "L" label, which stands for leidenshaft — "passion." With all this passion for the silvaner grape, Daniel hopes that it one day will have the same reputation and global popularity as riesling. 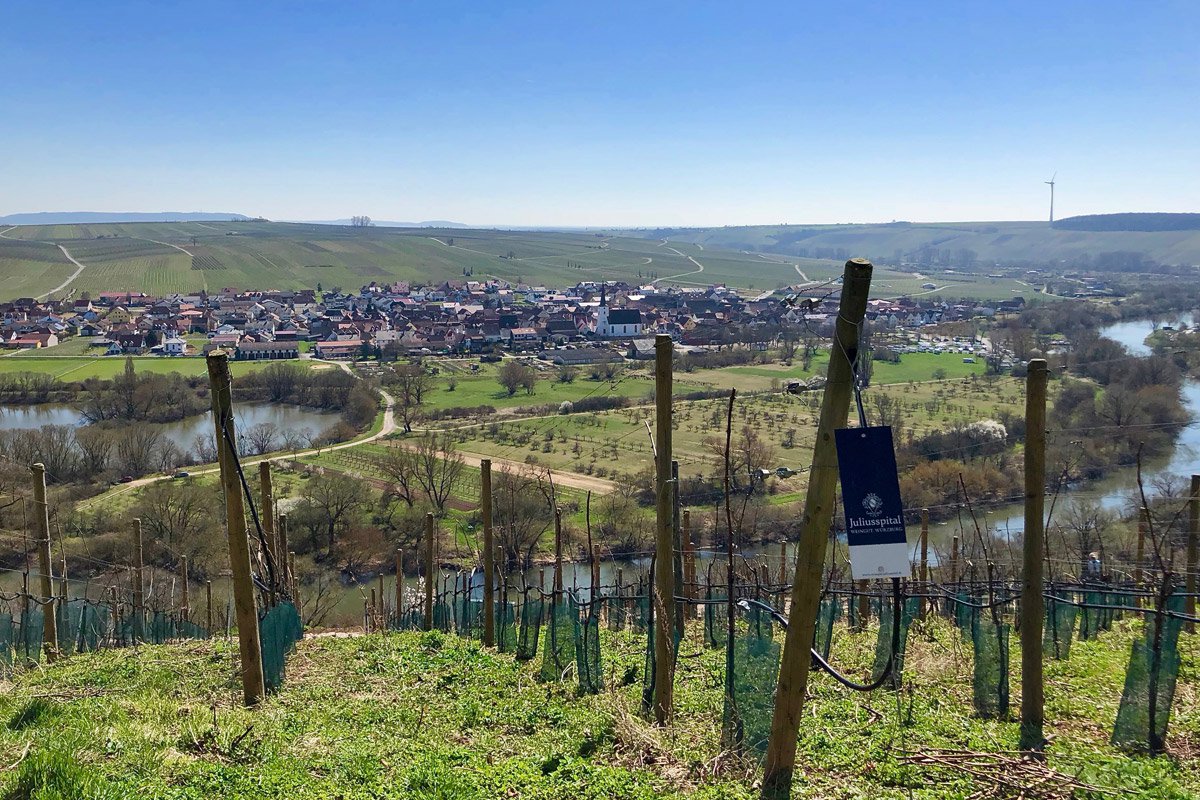 The terrace at Vogelsberg restaurant has a delightful panoramic view of the River Main. Photo by Paul Jebara.[/caption] 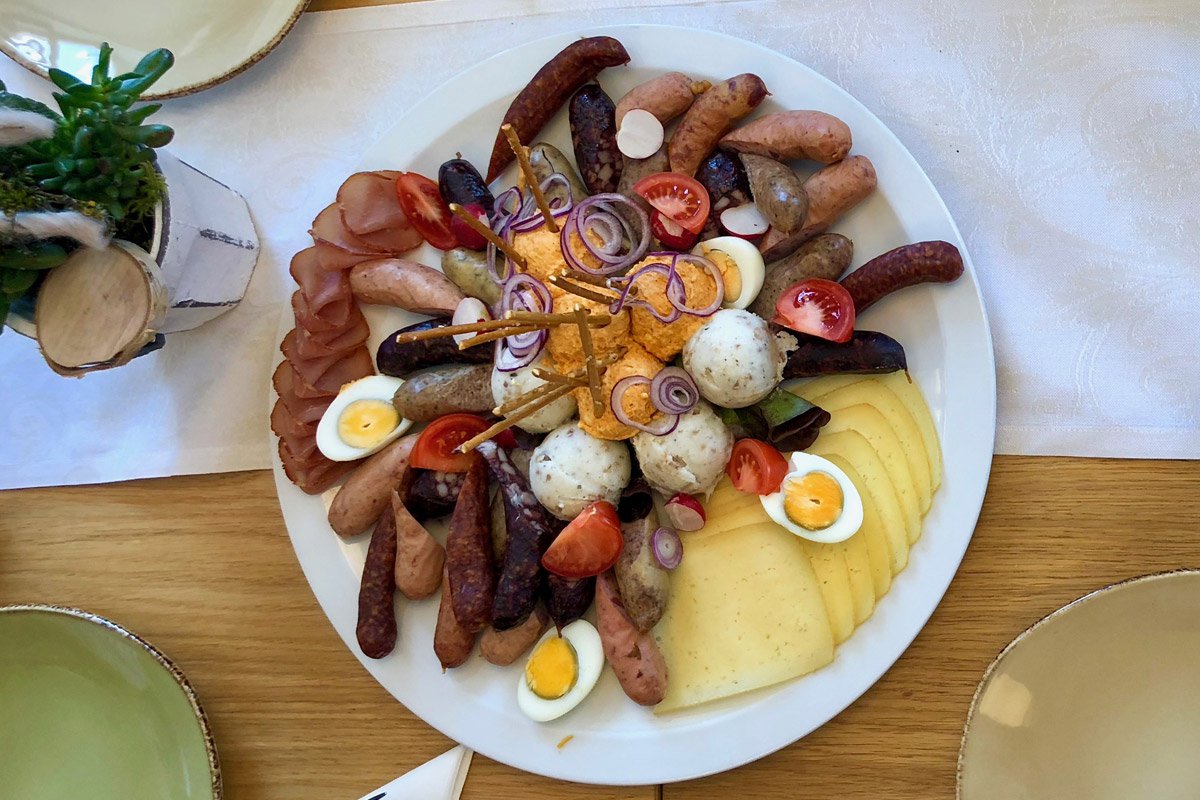 Just over a mile east from Rainer Sauer is Vogelberg. The former monastery is now a stately hilltop hotel and restaurant, and it's a perfect spot for a traditional lunch with views as spectacular as views get. From the sprawling terrace, you'll have the ultimate vista of the Main River loop and the vineyards that swirl into its valley. Many of the wines served at Vogelberg are from Würzburg's Juliusspital. The restaurant's menu couldn't be more Franconian. Order the sampling platter, which overflows with house-made liverwurst and sausages, smoked fish, and obatzda, a spiced cheese dip. 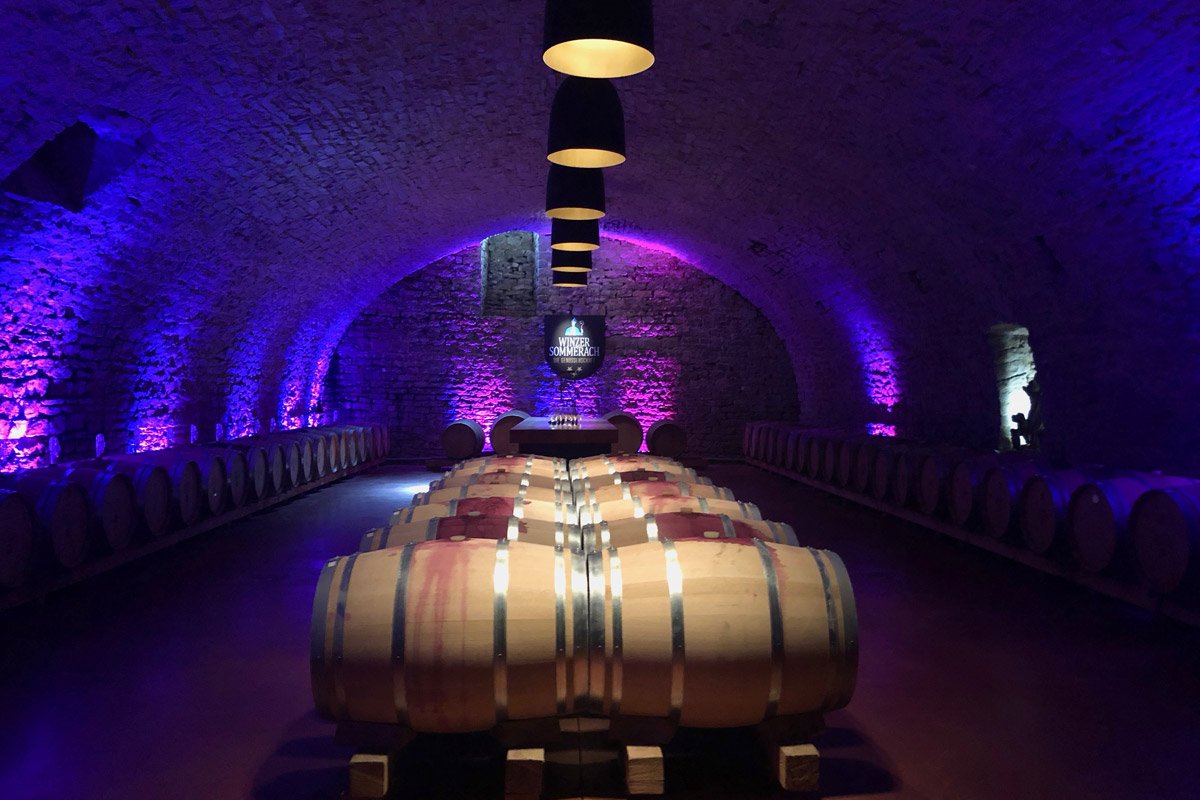 Next stop: Wine Island, a place you thought only existed in your happy hour dreams. In order to connect the towns of Volkach with Schwarzach am Main, a canal was dug in the 1950s, forming a small island that today is covered in family-owned vineyards, some small enough to occupy just their front yards. Sommerach, one of the island's two towns, is home to Winzer Sommerach, the oldest wine cooperative in Franconia. Founded in 1901, Winzer Sommerach has a current membership of 90 wine-growing families, each contributing the majority of their grape bounty to the co-op. With these grapes, 80 different bottles are produced, including an impressive Domina red and seasonal varietals like the fruity Sommerlust series. Winzer Sommerach also offers cooking classes, which emphasize seasonal local ingredients that pair well with their wines. 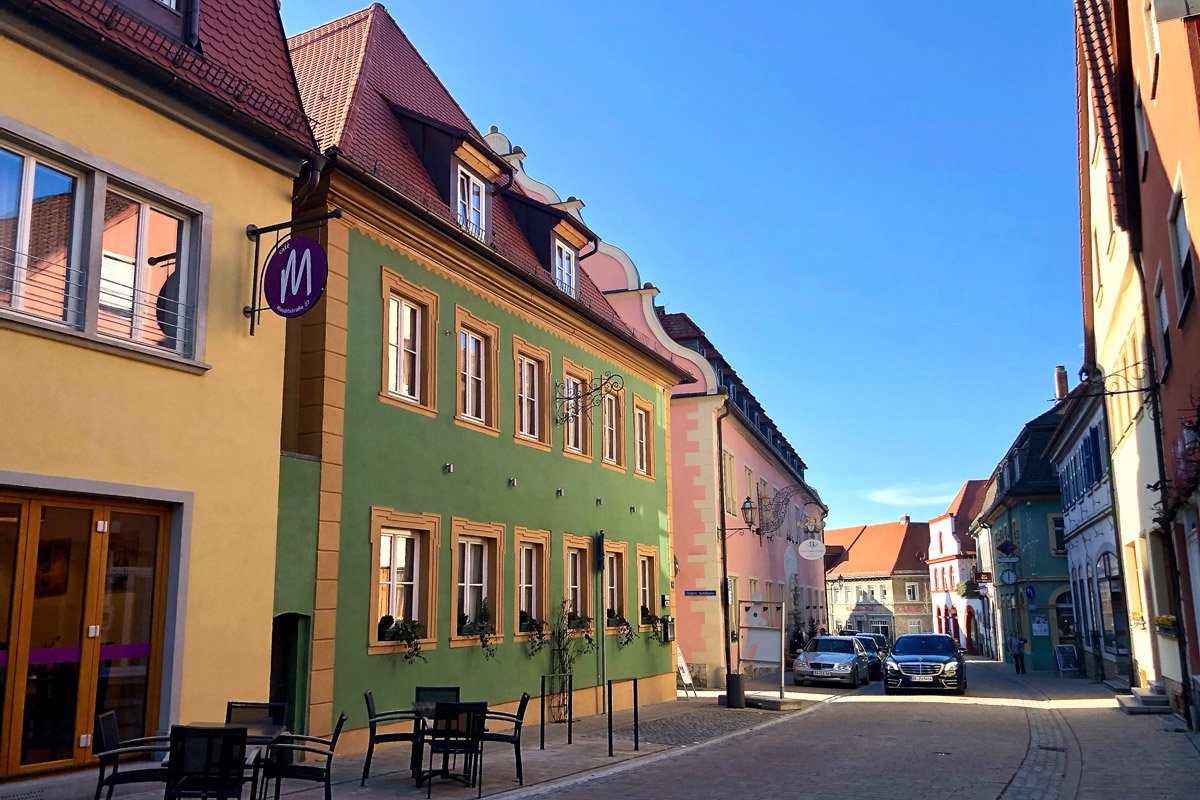 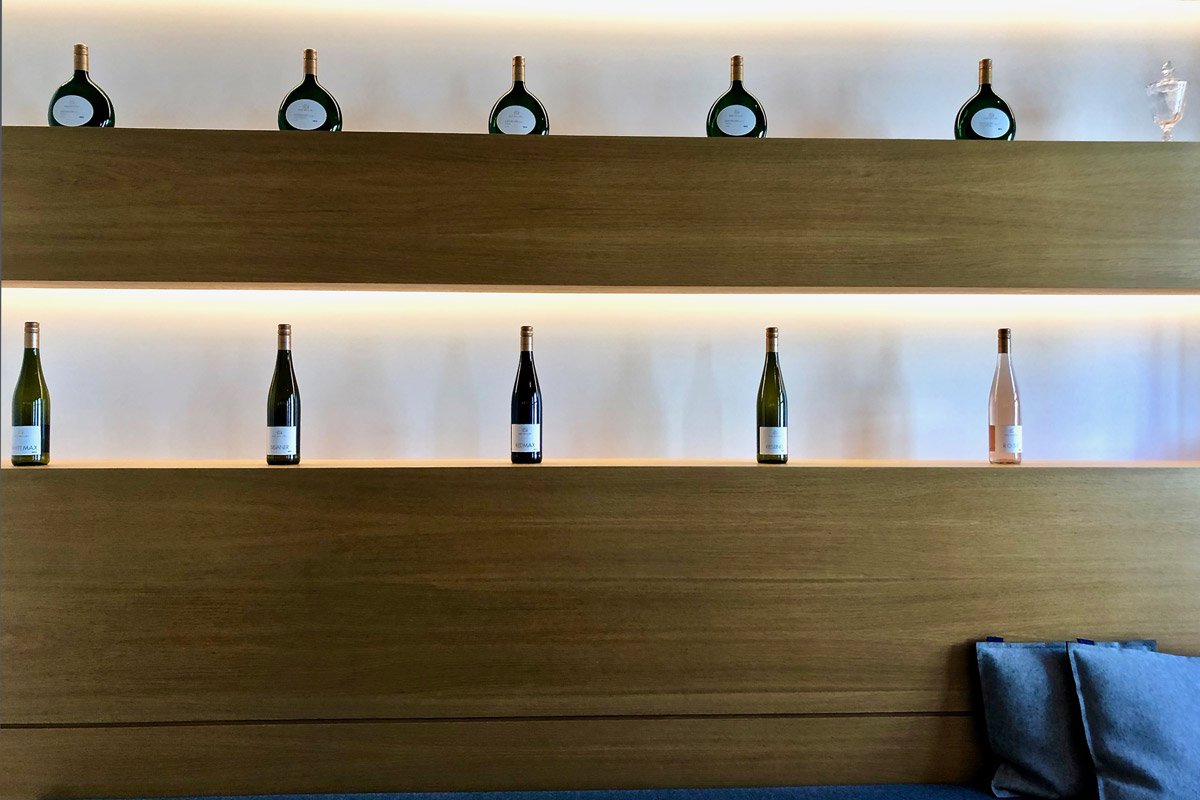 End your wine trail in Volkach, where Gothic half-timbered and Baroque pastel buildings create a fairy tale scene with help from a soundtrack of chirping songbirds. Waltz down cobblestone Hauptstraße to Weingut Max Müller, an award-winning winery and cellar built in 1692 to serve the bishops, whose monastery occupied the top floor. Now run by a fourth generation of Müller family "wine freaks," the winery's interior has been completely revamped into a modern tasting room, event venue, and shop. This contemporary attitude is reflected in their product, too: Many of their wines are sold in the common wine bottle instead of the bocksbeutal and are made using eco-friendly wine-growing practices. Try Maxi Secco Rosé, a bubbly bright pink rosé, or if you're with kids or friends who don't drink, ask for Maxi Trauben Secco, an alcohol-free delight.

If by the time you return to Würzburg the sun is still out — and you have room for one more glass of silvaner — raise a final toast to the sunset on Alte Mainbrücke: zum wohl!

How to Get There
Your best bet is to fly into Frankfurt International Airport. It’s not only the closest but also the most practical, as it welcomes the most international flights in Germany. Franconia is located southeast of Frankfurt, and Würzurg isabout one-and-a-half hour by car. Stuttgart and Nuremberg International Airports are alternatives.

Getting Around
Rent a car so you can both speed down the pristine Bavarian autobahns and stop whenever you'd like to explore random towns and hidden wineries. Most aren't near a rail or bus station. Plus, it's always better to be on your own time. Parking within the historical centers of towns can be tricky, so check with your hotel on the best way to arrive and park. Once in the countryside, feel free to rent bikes and curate your own winery tour. Lots of locals love to spend a sunny day winery hopping on their bicycles.

When to Go/Weather
Early spring or fall are the best times to go. The rains start to dissipate in late April, and into May the sunshine becomes more consistent. Early fall brings harvest season to the vineyards. The height of summer brings massive tour groups and, in recent years, excessive heat, so it’s not the best time to visit.

Money Matters
Common tipping courtesy is to round up the bill to the nearest factor of five or ten, or tip ten percent. No need to tip at bars. Tip tour guides several euros if the service was outstanding. 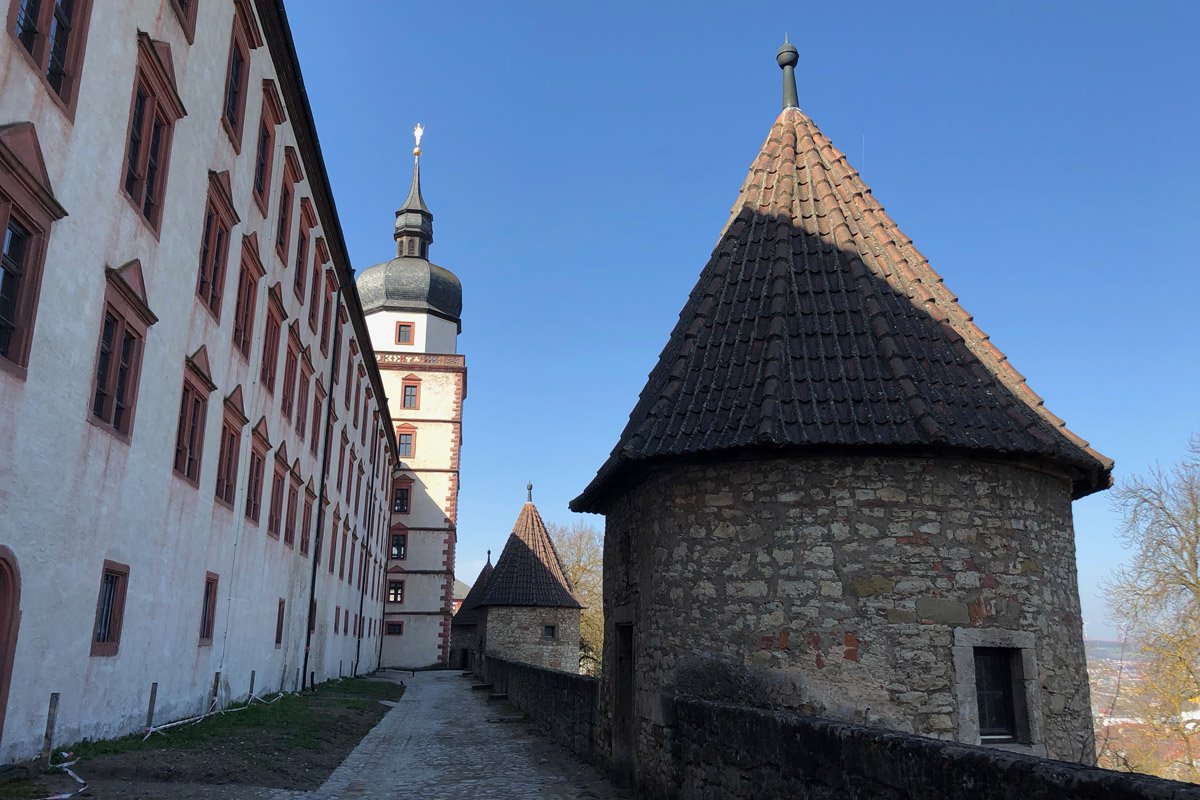 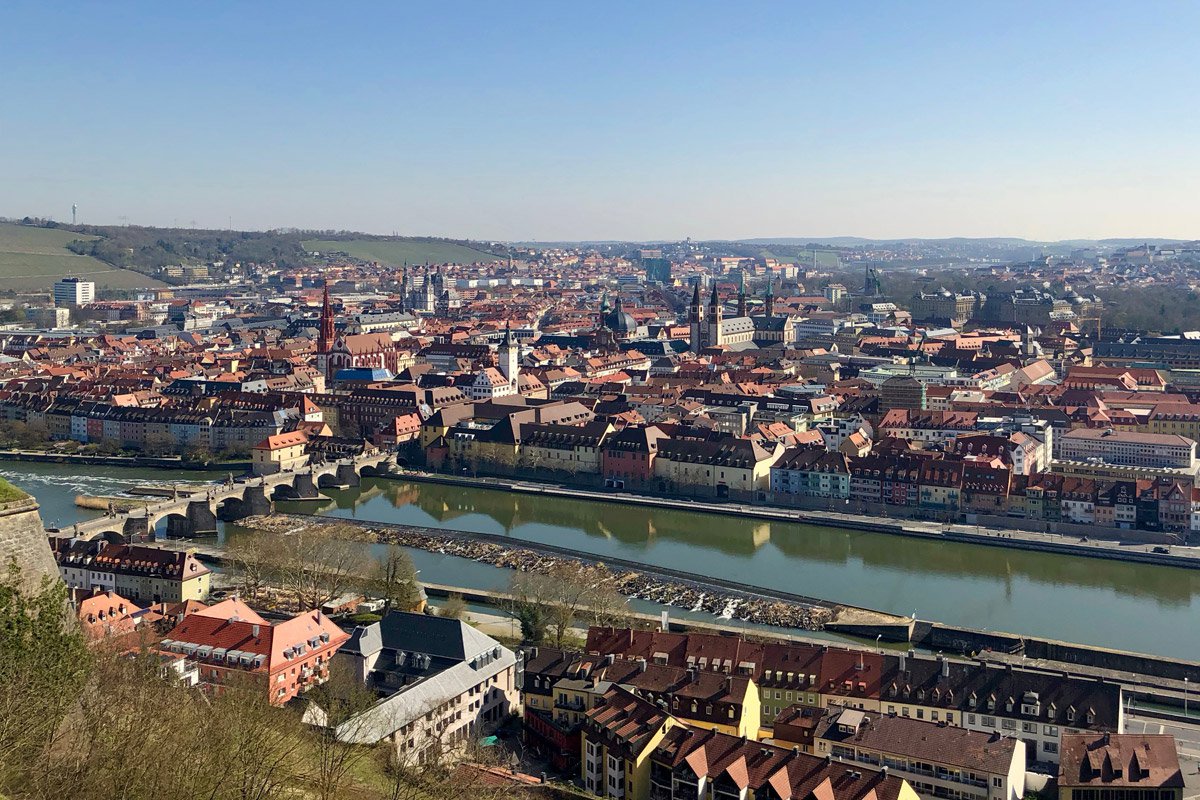 The view onto Würzberg from Marienberg Fortress. Photo by Paul Jebara.[/caption]

Local Customs
Note that when referring to local elements (be it the people, food, wines), the terms Franconian and Bavarian are not interchangeable. Although they are part of the Bavarian administrative state, Franconians consider themselves very culturally distinct from the Bavarians and like to keep their cultural traditions separate — especially their winemaking.

What to Pack
The weather doesn't fluctuate that much in a single day, but it's always a good idea to bring layers and rain gear. An extra suitcase will be helpful for all the wine you'll want to bring home.

For Your Bedside Table
To fully immerse yourself in the Baroque story of the Margravine Wilhelmine of Bayreuth, try to get your hands on her dramatic memoir, Memoirs of Frederica Sophia Wilhelmina, Princess Royal of Prussia, Margravine of Bareith, Sister of Frederic the Great. In Two Volumes. Vol. II, which helped inspire the modern revival of Artaserse, the opera performed at the reopening of the Margravial Opera House.

An education on Richard Wagner, Germany's most famous opera composer who based himself in Bayreuth, would also be helpful. Though block off your calendar in advance, most of his operas last over five hours.

Keep Exploring
Counting the Ways to Love Dresden, from 1 Monkey to 4,909 Diamonds
A Picture-Perfect Guide to Munich and Berlin
Wine Country Around the World