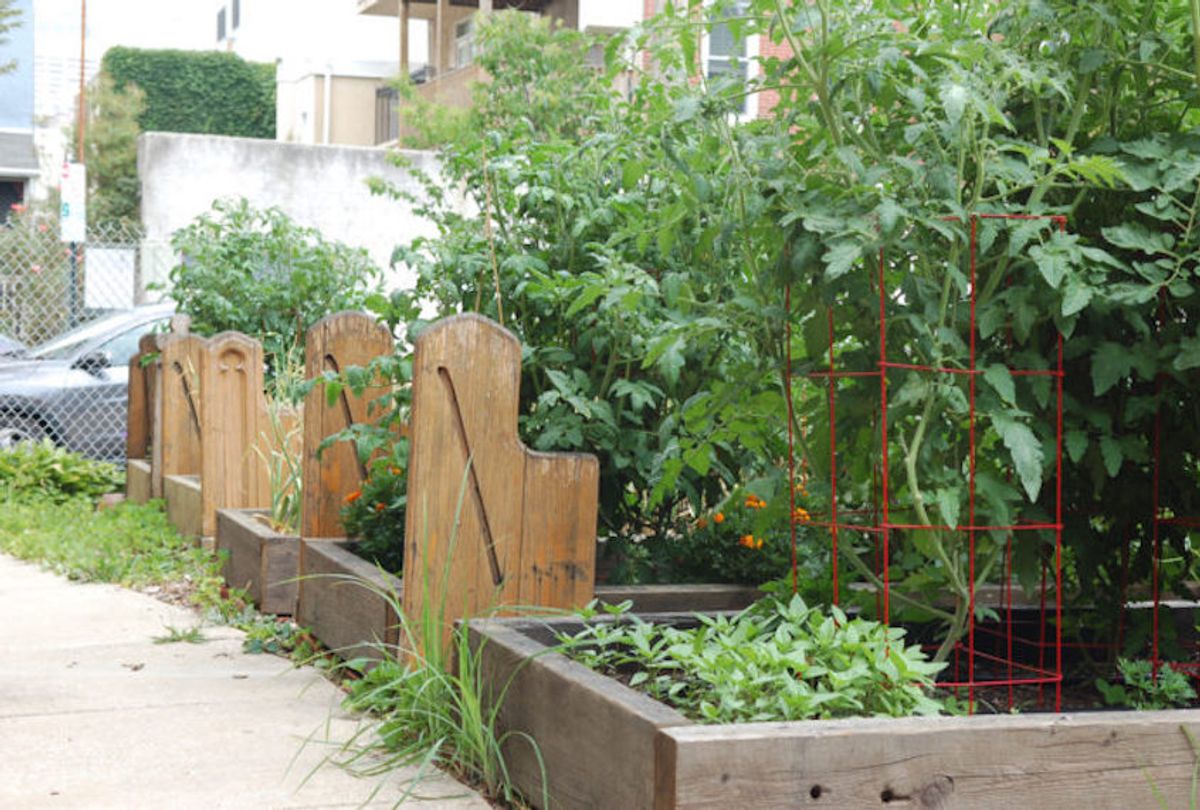 Not many churches can boast their own Garden of Eden, but South Philadelphia’s historic Union Baptist Church (UBC) can. When Loretta Lewis and other veteran congregants of UBC opened a soup kitchen 20 years ago, they made a solemn pledge: “We just vowed that we’re not going feed people anything that we wouldn’t eat or feed our families,” she says. “The people who come are used to eating substandard food, but here they have never had substandard food.”

The soup kitchen volunteers have always prepared for the weekly Friday luncheon by shopping for and cooking food in an industrial kitchen in the church’s basement, adjacent to a dining room with cloth-covered tables, where people from nearby shelters are welcome to enjoy a free, nutritious meal.

And for the past year, sourcing fresh vegetables — often a big challenge for the church — has been easy. The soup kitchen’s pantry is now supplemented by hyper-local produce, harvested the same day from a new garden in a previously underused plot next door to the church.

Meei Ling Ng, an artist and urban grower who lives nearby, began a collaboration with the church a year and a half ago to develop what they’ve jointly called the UBC Garden of Eden. “I want to promote ‘grow food where you live,’” Ng says. “That’s always my project title, everywhere. And ‘provide fresh, healthy food to the needy, to the homeless.’ It benefits the rest of the community, too, through educating how to grow.”

In essence, Ng and UBC have cooperated on of a farm-to-table soup kitchen that supports the church’s need for (often costly) produce, while simultaneously involving the community by inviting them to help tend the garden two days a week. “We were pretty much supporting the soup kitchen on our own,” says Lewis, “but with Meei Ling, even early in the [garden’s first] year, we had salad.”

Ng planted an unusual variety of crops that include black heirloom tomatoes, rainbow chard, summer squash, purple cauliflower, Asian pears, and almonds, all cultivated in raised beds and in an orchard along the church’s perimeter. In a way, she has replicated the model of her childhood home on a five-acre orchid farm in Singapore, where her family self-sustained all of its produce needs.

“We had rows and rows of vegetables and fruit trees everywhere,” Ng recalls. “I grew up in that kind of environment. Everything we picked we ate fresh.” Having lived in Philadelphia for more than two decades, Ng is undeterred by her current home’s urban density in finding places to grow food.

As a working artist, Ng considers the UBC Garden of Eden to be an extension of her multimedia installation sculptures, many of which are food- and farm-themed. Some of her past works in Philadelphia include a musical garden at SpArc Servicesand the Deep Roots series of installations at two of the city’s urban farms.

The UBC Garden of Eden is the second of her spontaneously developed hunger-relief urban farms; the first such project was at Sunday Breakfast Rescue Mission, Philadelphia’s largest homeless emergency shelter. There, a string of raised beds along the edge of the mission’s parking lot have provided the high-volume kitchen with fresh vegetables (such as tomatoes, salad greens, and fresh herbs) since 2015, as well as farming instruction for those overcoming homelessness.

“Fresh produce is extremely hard to come by,” says Rosalyn Forbes, the director of development at Sunday Breakfast Rescue Mission. “We rely heavily on donated nonperishable food items, which means that much of the fruits and vegetables we serve are canned. The Sunday Breakfast Farm provides fresh produce that can then be served in our kitchen.”

Salads are composed of freshly harvested greens; the herb garden is thoughtfully situated outside the kitchen door so that it is easy to reach while cooking. “It has elevated the quality of the food being served at the Mission,” Forbes continues. “Too often, those experiencing homelessness also suffer from health problems related to a poor diet.”

Solving the problem of scale

Sourcing fresh produce — and staying within budget — is a challenge for many soup kitchens. Individual donations of perishable items are rare, so some organizations choose to work with hunger-relief nonprofits that have the logistical capability to glean fruit and vegetable gifts directly from local farmers. The Philadelphia Orchard Project, which contributed fig, almond, and Asian pear trees to the UBC Garden of Eden this year, has a fruit gleaning program. Philabundance, another local nonprofit, is known by Philadelphia-area farmers as a way to keep excess or less cosmetically attractive produce from going to waste.

Distribution of this donated produce requires complex transportation, however, and so soup kitchens must often meet certain volume criteria in order to receive deliveries. Philabundance, for example, requires that its soup-kitchen member agencies serve at least 500 monthly meals in order to qualify. For smaller-scale operations that don’t reach that number, such as UBC’s soup kitchen (which has fed around 70-80 people per week in previous years and feeds between 20-30 each week now), this usually means they have to purchase produce themselves or rely on non-perishable items.

“Produce is hard to come by [for] smaller operations, and [direct] donations of produce [by farmers] could have a major impact,” says Scott Smith, director of food acquisition at Philabundance.

By growing the produce themselves, Ng and the UBC soup kitchen volunteers are slowly sidestepping the need to seek produce donations or purchase fruits and vegetables for the program. Phil Forsyth, executive director of Philadelphia Orchard Project, praised this solution, saying, “Of course, another approach is for soup kitchens to plant their own gardens and orchards to supply themselves with the most fresh, local produce possible.”

Even for larger organizations such as Sunday Breakfast Rescue Mission, which serves over 400 meals daily and qualifies for delivery from organizations such as Philabundance, the parking-lot farm developed by Ng serves an important function. “There never seems to be enough donated fresh produce to keep up with the demand,” notes Forbes, “which is why we decided to think outside the box and grow it ourselves.”

As an added benefit, Ng’s farms engage their surrounding urban communities and teach city dwellers that even figs can grow on a city block. An herb garden can flourish in a parking lot, and heirloom tomatoes can thrive in a raised bed built out of salvage materials from the demolition of a nearby growhouse.

The care Ng takes in nurturing the crops at UBC Garden of Eden matches the motivation that the church’s soup kitchen volunteers have for serving food they would feed their own families. The symbiosis has been apparent since Ng’s first harvest last summer. “I was so happy and delighted to see a green area of the plate,” Ng says. “I want to share that experience of fresh produce with people. It tastes different, because it’s so fresh.”