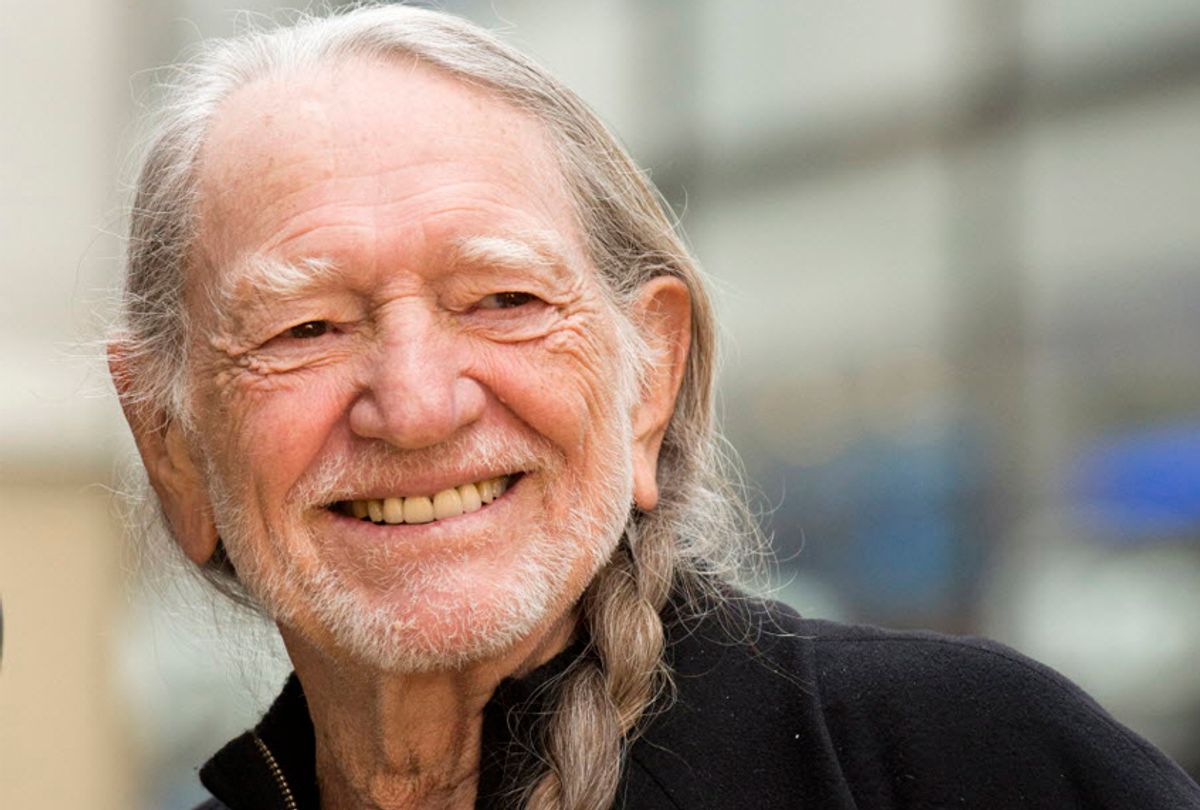 “We’ve never had so much attention,” says Willie Nelson. He’s sitting on his bus, the Honeysuckle Rose, parked outside the "Late Show With Stephen Colbert." Nelson, animated and full of laughs, is killing time hitting a weed pen and sipping coffee before performing “Summer Wind” from "My Way," his moving new Sinatra tribute album. But the attention Nelson is referring to is his endorsement of Texas Senate candidate Beto O’Rourke, who stands a real chance to unseat Ted Cruz in November. Nelson, 85, will play a rally for O’Rourke on September 29th at Austin’s Auditorium Shores, alongside his sons Lukas and Micah, Leon Bridges, Carrie Rodriguez, Tameca Jones and Joe Ely. Some Nelson fans were upset about the singer’s endorsement; right wing sites quoted a select few commenters saying things like, “I adored you — but no more” and “I always thought you were a patriot.”

“People will sometimes get upset because I’ve got a vote, too,” Nelson says, before breaking out an old saying: “Opinions are like assholes, everybody’s got one.”

For anyone surprised by his endorsement, Nelson says he’s been on campaign trails doing fundraisers ever since cowboy singer Tex Ritter (who was born in 1905) ran for Senate in Tennessee in 1970. “I’ve endorsed a lot of people: Jimmy Carter, Dennis Kucinich, and Hillary and Bill, Obama,” Nelson says. “A lot of people seem surprised that I’m backing a candidate, but it ain’t my first rodeo.”

Nelson and O’Rourke previously hung out at Nelson’s most recent annual Fourth of July picnic. At the time, O’Rourke had just finished visiting all 254 Texas counties while holding town halls, logging hundreds of thousands of miles. That immediately impressed Nelson, a guy who knows something about being on the road. “I like the way he goes about trying to get elected — he’s been to every county in Texas. He’s knocked on every door. And that’s hard work. And it looks like it may have paid off a little bit.”

Nelson also likes that O’Rourke is a musician. Though he has not yet heard the candidate’s old punk rock band Foss, Nelson did like singing songs like “Roll Me Up and Smoke Me When I Die” with him at the Fourth of July picnic. “He seems to be pretty good,” Nelson says. O’Rourke has said his musical days prepared him for politics: “A bunch of friends in a van… and we’ve got all our gear in here, and we’re just going from one town to the next, both telling our story and listening to and learning from other people’s stories.” Nelson nods after hearing that quote. “He seems to have a good attitude.” Are Texans ready for such a progressive candidate? “Oh, you know,” Nelson says. “Texans are ready for anything.”

Nelson becomes more impassioned while talking about issues, especially immigration. He’s been disturbed watching children being separated from their parents at the border — some of whom have yet to be reunited. “[O’Rourke] has been down to the border and he’s seen that bad stuff that’s still going on. The zero tolerance thing is bad. That kind of judgement has always been bad. What does it say in the good book? ‘Judge not lest you be judged?’ If you say zero tolerance, you’re gonna get zero tolerance. A lot of things are wrong right now.”

“It’s horrible to see kids pulled away from their parents arms when our Statue of Liberty said, ‘Bring us your tired and weak, we’ll make them strong,'” Nelson says, paraphrasing. “I did a song one time called, ‘Living in the Promiseland.’ What happened to that? Why don’t we like people coming in anymore? That’s not right. Our borders have always been: come on in, we need you.”

At the same time, Nelson expresses sympathy for Ted Cruz. He’s felt bad watching him seek help from President Trump — the same guy who coined a nasty nickname about him, spread conspiracy theories linking Cruz’s father to the Kennedy assassination and once tweeted, “Why would the people of Texas support Ted Cruz when he has accomplished absolutely nothing for them. He is another all talk, no action pol.”

“I really kind of feel bad for Ted because he got a bad deal,” Nelson says, before echoing the President’s insults: “Getting insulted, called ‘Lyin Ted’, they talk about his wife’s appearance and all that horseshit. I just can’t imagine him still feeling the same love after that or any of his followers. His followers have gotta have had their feelings hurt a little bit, too, to hear that stuff about their guy.”

till, Nelson can’t help but laugh when thinking about Cruz’s recent moves, like when he said “if Beto wins, BBQ will be illegal” after PETA apparently handed out barbecued tofu at a Cruz rally. “Well, I can see that happening, also guitars,” Nelson jokes. And then there was Cruz’s recent statement that the Democrats “want us to be just like California, right down to tofu and silicon and dyed hair.” “Well all right, cool!” Nelson says, getting excited at that prospect. His wife Annie speaks up: “He forgot that soybeans are [a major] crop in Texas, and that’s how you make tofu. He got hammered for that. Has he never been to Whole Foods? They started in Austin — they sell tofu! “

“He’s not that bad a guy, you know,” Nelson says of Cruz. “But for the whole process and what we’re looking for, Beto is the best man.”

Annie has created several Cannabis-infused chocolates for Nelson’s marijuana company, Willie’s Reserve. Legalization remains a major focus of Nelson’s, and he’s excited to talk to O’Rourke about the subject. “There’s a couple other things I wanna talk about. I want to talk about the electoral college and how that happened. I wanna talk about the gerrymandering, how that happened. I wanna talk about, how can you be President of the United States and not show your income taxes? I can’t go nowhere without showing mine.” (Nelson had tax problems in the early 1990s.) “There are a lot of things I’m interested in having answers to. I’m not sure Beto has all the answers, but he might.”

Well before Trump, Nelson was floated as a possible celebrity Presidential candidate over the years. His shows have even featured “Willie For President” bumper stickers. “Oh, I’ve thought about it,” he says of running. “The first thing I would do is make ‘fuckit’ one word.”

“I don’t want the job,” he says. “It’s too hard. It’s too many people yelling at you. No matter what you do, someone’s not going to like it because they’re not supposed to. But with music, you could put ’em all there together — Cruz and Trump and Beto and me — and we’ll sing ‘Amazing Grace’, and it’ll be cool.”

But with the renewed interest into his politics, is Willie a little tempted to run and take on Trump?

“Oh, I could make so many people mad,” he says. “It would be almost worth it.”