A decade after Lehman Brothers, U.S. is still a Stucknation

Wall Street’s pretax profits totaled $13.7 billion in the first half of 2018, 11 percent higher than last year 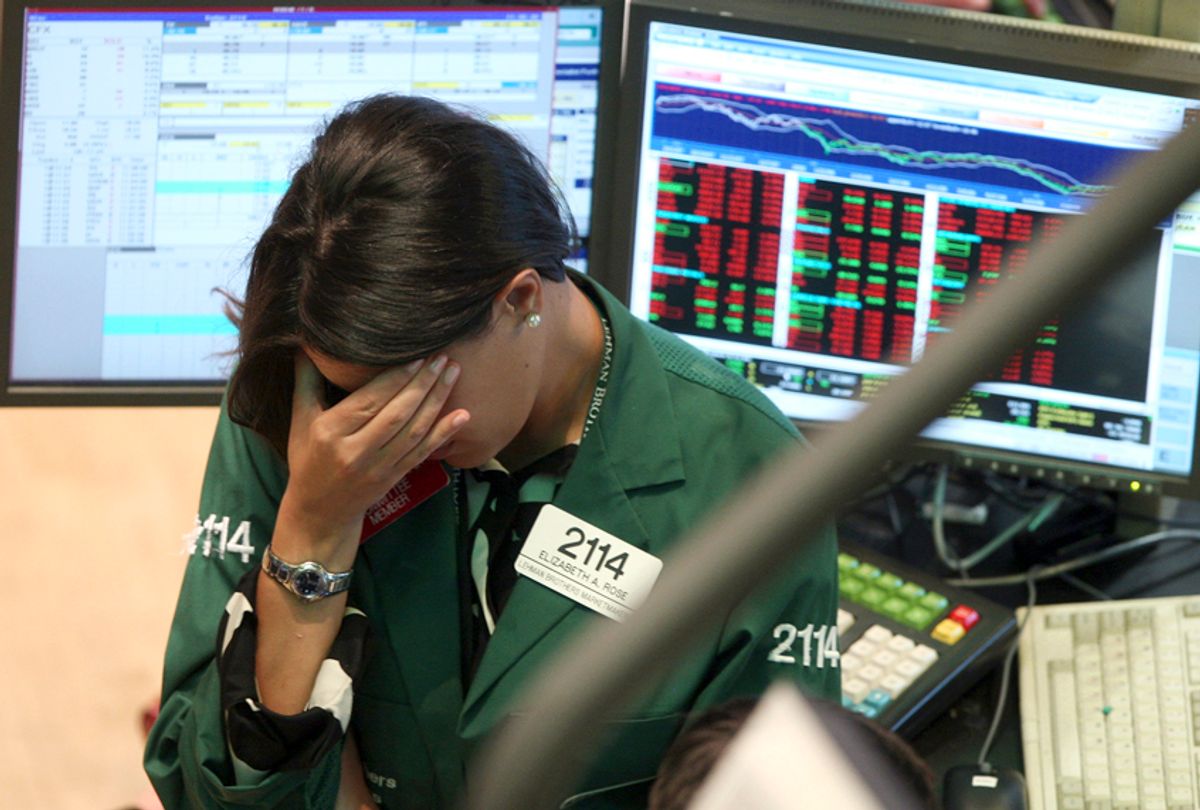 Well, surprise, surprise. A President elected on the pledge to help the working class has once again opted instead to preside over an even faster acceleration of wealth concentration at the very top of America’s pyramid scheme economy.

They all talk a great game, but once they take up residence at 1600 Pennsylvania Avenue they take care of the people this country is owned by.

On this there is a bipartisan through line that started in the 1970s when average working class Americans saw their purchasing power start to slide, even as their productivity sky rocketed and the wealth generated by that labor was increasingly pocketed by the folks at the top.

This month marked the tenth anniversary of the spectacular collapse of Lehman Brothers and by every measure it would appear that the banksters that heisted $20 trillion in American family wealth are living larger than ever.

READ MORE: Watching Lehman Brothers collapse from the inside: A 2008 recruit on the bank’s final days

According to the New York State Comptroller Wall Street’s pretax profits totaled $13.7 billion in the first half of 2018, 11 percent higher than last year. Last year, pretax profits spiked 42 percent to $24.5 billion, which was up dramatically from the not too shabby 21 percent jump in previous the previous year.

"Wall Street has profited every year since the end of the recession in 2009, and compensation last year reached its highest point since the financial crisis,” said New York State Comptroller Thomas P. DiNapoli in a press release hailing the finance industry’s robust performance.

The average salary in the securities industry in New York state increased by 12 percent in 2017 to $403,100, the highest since 2008 and the third-highest on record after adjusting for inflation. New York had the highest average salary of any state in the nation, reflecting the concentration of highly compensated employees, such as chief executive officers, in New York City.”

Meanwhile, down here on planet earth we are supposed to get excited when the Bureau of Labor Statistics reports that in August the average hourly wage went up by 10 cents an hour in a country where the average workweek remains 34.5 hours.

According to the last monthly Bureau of Labor Statistics report workforce participation has declined to 62.7 percent under President Trump, continuing its general downward trajectory in has been on since the 1990s

So many of us are just barely getting by, nickeled and dimed in part-time America. Keep in mind that this hogging of the national prosperity is a daily heist already in progress as the 2008 dislocation continues, like a conveyor belt that takes so many to destitution.

“The social safety net for older Americans has been shrinking for the past couple decades,” according to the study’s abstract. “The risks associated with aging, reduced income, and increased healthcare costs, have been offloaded onto older individuals.”

The abstract continues, “The magnitude of growth in older Americans in bankruptcy is so large that the broader trend of an aging U.S. population can explain only a small portion of the effect . . . . For an increasing number of older Americans, their golden years are fraught with economic risks, the result of which is often bankruptcy.”

But it is not just more and more of the senior set that’s getting chewed up and spit out by the Great Pyramid scheme that sucks all wealth to the top. The lack of a broad-based prosperity has depressed household formation as an entire generation has been turned into debt slaves servicing their college borrowing living in their parents basement.

Consider that in 1972 we saw 1.9 million new households formed. In 2017 we saw just 400,000. In fact, last year in Trumplandia household formation slowed as did housing starts.

The annual report from the Joint Center for Housing Studies of Harvard University found that “homeownership rates among young adults are even lower than in 1988, and the share of cost-burdened renters is significantly higher, with almost half of all renters paying more than 30 percent of their income for housing.”

The analysis continues, “Soaring housing costs are largely to blame. The national median rent rose 20 percent faster than overall inflation between 1990 and 2016 and the median home price rose 41 percent faster.”

The Harvard researchers that “nearly a third of U.S. households (38.1 million) paid more than 30 percent of their incomes for housing in 2016” with more than half (20.8 million) being renters, with “fully 80 percent of renters and 63 percent of owners making less than $30,000” finding themselves struggling to pay for shelter.

At the same time the study found “increases in the median sales price of existing homes have outstripped growth in median household income for six straight years.”

This is the part of the Obama legacy nobody talks about when he gets credited for "saving the economy." What he saved was that Wall Street machine that makes money off money and often incentivizes things like ecological destruction.

And don’t believe the partisan hype that just because they have a ‘D’ after their name that they are the friend of the huge army of tens of millions of Americans that work long hours yet struggle week-to-week to pay for shelter and the basics.

Exhibit A is former Vice-President Joe Biden, a former Senator from Delaware, the sanctuary state that has offered non-transparent limited liability corporation protection to the Russian Mafia, vulture capitalists and transnational corporations. As International Business Times reported back in 2015, it was ‘phony’ blue collar Joe, in the service of Delaware’s growing banking sector, who made it so that student loan debt was not dischargeable via the bankruptcy courts.

Watch the video below to hear DeRay Mckesson’s response to why he is a polarizing figure on Twitter.