Ford-Kavanaugh showdown is an important battle: But now progressives must fight the war

Christine Blasey Ford is a test of our political willpower. No matter what happens, Republicans must pay the price 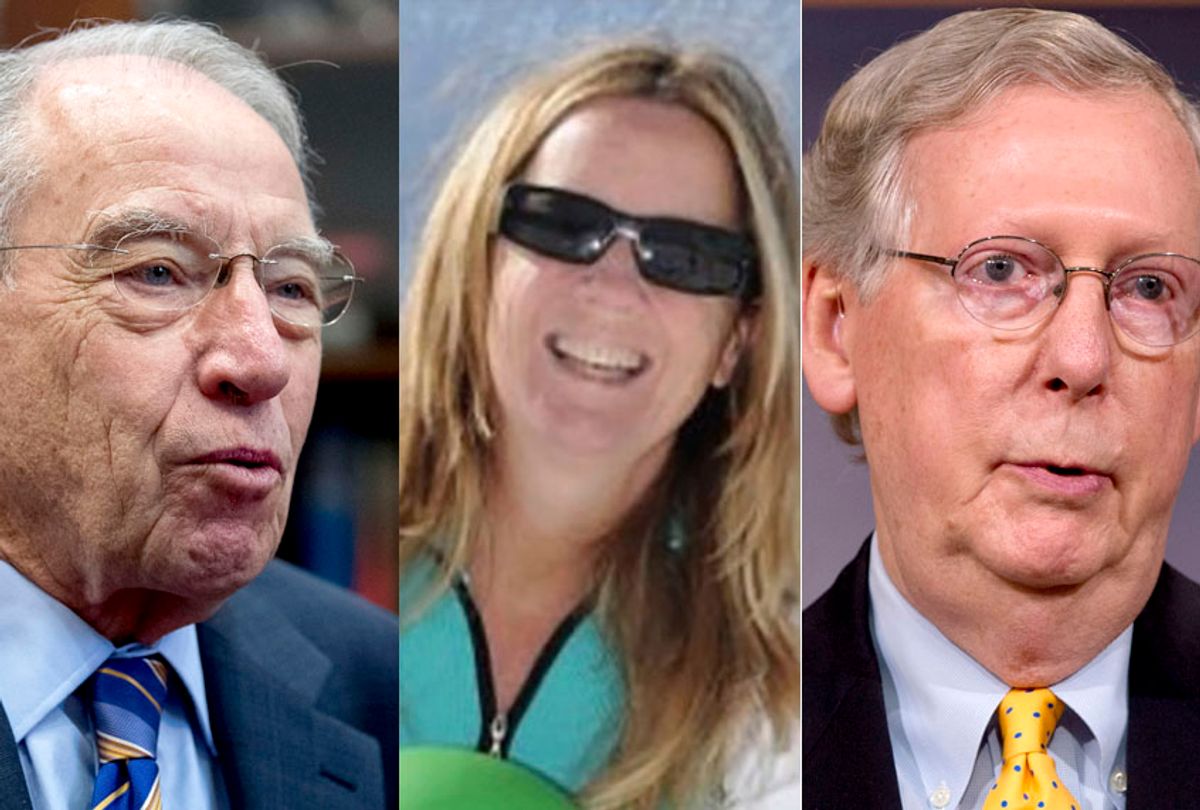 Dr. Christine Blasey Ford’s accusation that Brett Kavanaugh tried to rape her when they were teenagers has created an epic test for the nation, as well as our government. We’ve had 27 years to learn from the Anita Hill-Clarence Thomas hearings, and governing Republicans, for one, certainly have: They’ve learned how to be even more ruthless, hard-nosed, and contemptuous of women — hoping against hope that a paper-thin charade (based on a foundation of playing nice for the first 24 hours) will help them survive the political backlash they so richly deserve.

In the short run, they may succeed in forcing through Kavanaugh’s nomination, but at a terrible cost. Hill was treated despicably by GOP senators (and none too well by Joe Biden, either), but Ford’s treatment has been categorically worse: a literal re-enactment of Kavanaugh’s alleged rape attempt, as Chris Hayes tweeted:

In 1991, Thomas already perjured himself before Hill came forward — claiming he’d never thought about the Roe v. Wade decision. Today, Kavanaugh’s deception is much more far-reaching (the conservative push-back has been answered here). In 1991, corroborating witnesses were silenced or ignored in a rush to judgment. Today, we’re seeing the same in agonizing slow motion. In 1991, Hill was attacked with an avalanche of rape-culture lies we didn’t even yet have an adequate language to describe. Today, the #MeToo movement can dissect those lies six ways from Sunday, on Twitter, for all the world to see, from #WhyIDidntReport to debunking claims of false rape accusation. And yet the GOP is undeterred.

After Ford’s identity became known, Anita Hill herself wrote a magnanimous New York Times op-ed “How to Get the Kavanaugh Hearings Right,” arguing, “There is no way to redo 1991, but there are ways to do better,” with a process whose details “should be guided by experts who have devoted their careers to understanding sexual violence.”  She went on to identify some “basic ground rules,” including:

This is not a difficult set of lessons to learn — if only one wants to learn them. But rapists aren’t generally interested in learning how not to rape. And Republicans are now the rape party, lock, stock and barrel. It would have only taken one GOP senator on the Judiciary Committee to stop this horrific re-enactment in its tracks, and demand a fair process such as Hill described. But none did. It would only have taken the two pro-choice GOP senators (Susan Collins of Maine and Lisa Murkowski of Alaska) acting together to do the same, by pledging to vote no on Kavanaugh, unless a fairer committee process was adopted. But they did not.

The same day Hill published her Times article, Former Undersecretary of State Wendy Sherman, who advised Hill’s legal team at the time, wrote a USA Today op-ed advising Senate Democrats  how they could avoid repeating the mistakes of 1991. “First, this will not be a hearing and certainly not a fair fight,” she warned. “Chairman Charles Grassley will seek to put Ford on trial,” as was done with Anita Hill. The week that followed proved how right she was. To counter this, Sherman made three specific points and two broader ones:

Both these op-eds were valuable reflections on what we should have learned from the Hill-Thomas hearings, but even as they were written, before Grassley’s ghastly brute force bullying began, it was obvious that neither could possibly be enough. That's because of the larger political context, which needs to be fundamentally transformed. The #MeToo movement is evidence enough of that — but it’s only one facet of the broader social transformation we so desperately need.

Hill wrote as if it were possible for Republicans to act in good faith, when we know for a fact they cannot — a point driven home by Paul Krugman, in a recent column entitled “Kavanaugh and the Politics of Bad Faith.” Sherman gives good advice for how Democrats should fight this battle, but does not say enough about the war. It’s a war we have to fight and win, in order for Hill’s lessons to be learned.

Krugman’s discussion of bad faith is a helpful starting place. Bad faith is more than just hypocrisy, he notes:

“Bad faith” is, by the way, a legal term, referring to “entering into an agreement without the intention or means to fulfill it, or violating basic standards of honesty.” In politics, it usually means pretending to be committed to principles you abandon the moment they become inconvenient. And bad faith in this sense pervades almost everything the modern G.O.P. says and does.

Kavanaugh is a poster boy for GOP bad faith, but bad faith is just one part of the picture. Krugman clicks through several examples (Paul Ryan’s claims to fiscal responsibility vs. his deficit-exploding tax cut, attacks on Obama’s patriotism vs. quiescence about Trump) before summing up:

In fact, what’s really hard is to come up with significant areas of politics or policy where Republicans are acting in good faith. ... Mainly, I suspect, because its core policy agenda of cutting taxes on the rich while slashing social programs is deeply unpopular. So to win elections it must obscure its true policies.

There’s nothing new in this. More than 50 years ago Lloyd Free and Hadley Cantril wrote a landmark book, “The Political Beliefs of Americans: A Study of Public Opinion.” One of the book’s key findings was that almost two-thirds of the American people were “operational liberals,” in the sense that they supported more social spending for a list of specific needs, while almost half were “ideological conservatives,” in the sense that they supported "limited government" and "the free market." This disconnect represented a significant problem which the authors addressed by arguing that “the time has come for a restatement of American ideology to bring it in line with what the great majority of people want and approve.”

This restatement never occurred, obviously. Instead, we got the opposite: an increasingly powerful, rigid and extreme conservative movement, which paid less and less attention to facts over time as reality stubbornly refused to conform to its beliefs. The ideological/operational divide they described can also be characterized as a mythos/logos divide (see Karen Armstrong’s introduction to "The Battle for God," for example.) Logos deals with practical matters, while mythos is concerned with meaning.

In the judicial realm the conservative mythos is easily expressed: timeless justice, unswayed by the mood of the moment — or even the age. This is what Antonin Scalia’s supposed “originalism” offers, for example, even though it falls to pieces on close inspection. And that’s also what defines the essential liberal/conservative divide: Whether or not one allows for close inspection of handed-down “eternal truths.”

But conservatives don’t have a monopoly on mythos, even though it sometimes seems that way. And no one seriously argues we should be bound to the “justice” of the past: upholding slavery, denying women the right to vote, outlawing Red Lobster.

These are all, in different ways, movements of the powerless to claim justice as a birthright — not a commodity or a privilege. A 15-year-old girl who was nearly raped decades ago belongs in that tradition. We can all see ourselves in her — not just women, all of us. Her story is our story, and ours to prevent from happening over and over again.

Conservatives have spent the last half century waging a one-sided war to take over America’s courts. Liberals have fought back only sporadically in comparison. That has to end. Whatever happens with Kavanaugh’s nomination, whatever happens with the 2018 midterms, those are only battles. We need to fight them with everything we’ve got. But we need to fight them as battles in a larger war, or else we’ll always be at a disadvantage.

Consider the Supreme Court itself. If Kavanaugh is confirmed, there will be as many sexual abusers (and perjurers) on the Court as there are women. If he’s not, and Trump appoints someone else in his place, there will still be four justices appointed by presidents who lost the popular vote. (Remember that George W. Bush was also elected in 2000 while losing the popular vote.) Even worse, Bush's electoral victory in 2000 only occurred because conservative Supreme Court justices intervened, and effectively selected him. (See “Jews for Buchanan” for all the gory details).

In total, Republicans have only won the national popular vote once since 1988, and that happened in 2004, when Bush ran for re-election as a "war president." Yet they’ve appointed half the sitting justices, and Kavanaugh would make that a majority. Americans oppose overturning Roe v. Wade by more than two to one, but Kavanaugh would be poised to ignore them. Roe is only the most high-profile example of how the court is increasingly out-of-touch with the American people. Citizens United’s roll-back of campaign finance regulations is another prime example. Kavanaugh might even mean the death knell of the Affordable Care Act,  at a time when public opinion is moving sharply the other way, with a large majority now supporting Medicare for All.

I'm not arguing that the Supreme Court should slavishly reflect every aspect of public opinion. But neither should it be a rear guard, constantly fighting against the tide. It's only like that because conservatives have made the Supreme Court central to their politics for 50 years, using any means at all to achieve their ends, and even refusing to allow an elected president fill an open seat simply because he was a Democrat. To take the Court back, the rest of us need to be willing to do just the same: Make it a top priority, and recapture it by any means necessary.

“Playing nice” by accepting the rules that conservatives lay down — and set aside whenever it pleases them—is no longer an option. Consider how Republicans are treating Christine Blasey Ford even worse than they treated Anita Hill 27 years ago. The lesson should be clear. As Malvina Reynolds sang long ago, “It isn’t nice to block the doorway/ It isn’t nice to go to jail/ There are nicer ways to do it/ But the nice ways always fail.”

Republicans stole the Merrick Garland seat. There's a clear remedy: As soon as they have the power to do so, Democrats should expand the Supreme Court to 11 seats and appoint two liberals -- with the appropriate legal qualifications, of course -- to offset that theft. Yes, that would break with tradition. But there is nothing in the Constitution to prevent it, and in our current situation it's high time to get over handwringing about violating such norms. As Harvard Law professor Mark Tushnet wrote last year at Jack Balkin's blog:

The Democratic proposal for changing the small-c constitutional norm about the Court's size would be an offer of a new norm -- "You can't steal a Supreme Court seat and expect to get away with it." Seems like a good new norm to me.

How Donald Trump is destroying the GOP