The looming primary care crisis hits low-income communities the most 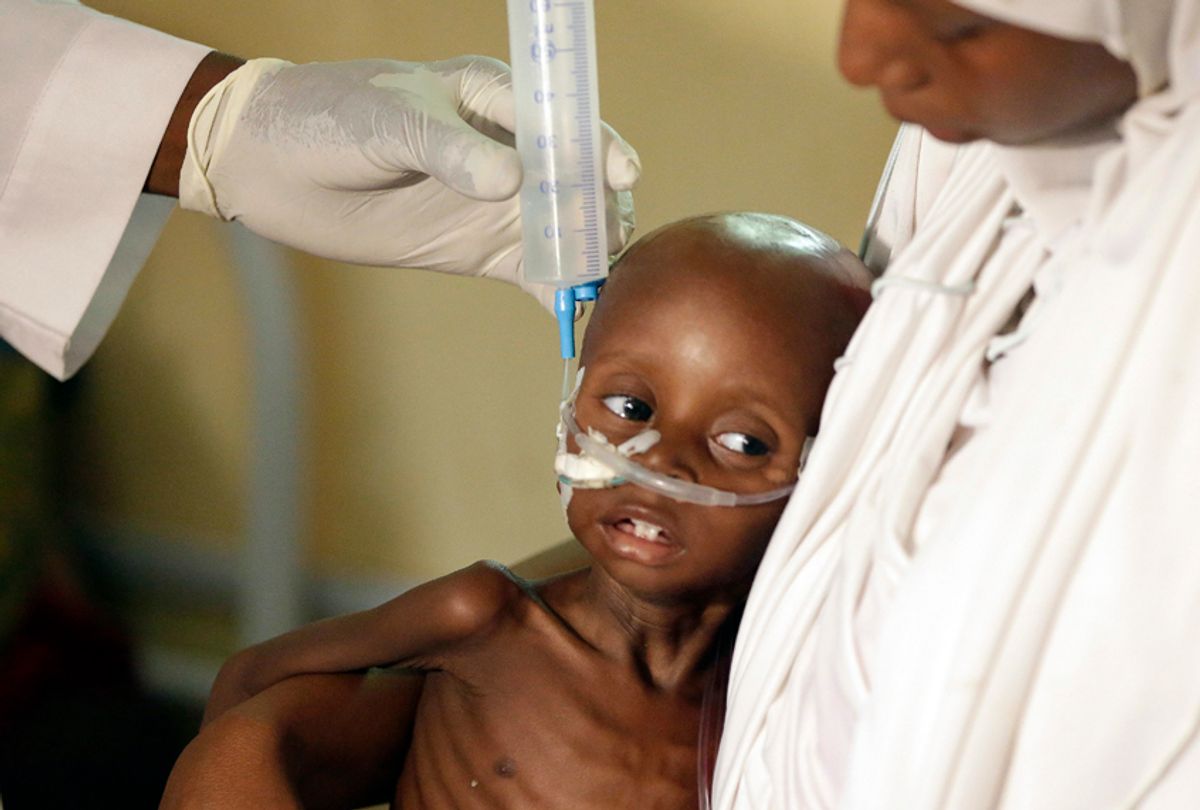 A doctor feeds a malnourished child at a feeding centre run by Doctors Without Borders in Maiduguri, Nigeria. (AP/Sunday Alamba)
--

America's medical system is facing a full-blown primary care crisis. To meet our nation's current needs would require almost 15,000 additional primary care doctors. Take into account the effects of aging and population growth, and the shortage will climb to almost 50,000 by 2030.

There are thousands of highly qualified students at international medical schools eager to fill this gap. Many are U.S. citizens who are studying abroad and want to return home to practice.

To solve America's doctor shortage, public health leaders must welcome more of these internationally trained doctors -- particularly because they're likelier than their U.S.-trained counterparts to serve in the poor and minority communities where the shortfall is most severe.

America is aging and growing. By 2035, the number of seniors will surpass the number of minors for the first time in our nation's history. The U.S. population will increase by more than 10 percent over the next decade.

READ MORE: Many foster kids were drugged without oversight: report

That's in part because the U.S.-educated doctors who do choose primary care tend to shy away from economically marginalized communities. They're drawn to affluent cities and suburbs where most people have private insurance, which pays more generously than government programs like Medicaid. Of the 5,800 U.S. sub-regions with a shortage of doctors, nearly 60 percent have poverty rates well above the national average.

African-American and Hispanic patients are less likely to have a doctor than white Americans, according to a joint study from UCLA and the National Institutes of Health. One in four black and Hispanic Americans lives in a "healthcare desert," an area with dangerously low numbers of primary care doctors. That's true of just one in ten whites.

This disparity helps explain why minorities are more likely to die from heart disease, stroke, and cancer than whites.

IMGs also tend to practice in high-need areas. In communities with a per-capita annual income below $15,000, 42 percent of doctors have been trained abroad. In areas where 75 percent or more of the population is non-white, nearly four in ten physicians are international graduates.

And it's not as if IMGs are second-rate doctors. They must meet the same rigorous professional standards as their U.S.-trained counterparts. In fact, there's evidence that international grads provide better care. According to a study published by The BMJ, a medical journal, patients treated by IMGs have slightly lower mortality rates.

But those all-time highs aren't high enough, given the depth of our nation's doctor shortage. Increasing funding for medical training and residencies must become a bigger priority for leaders at all levels of government, as well as private-sector actors with an interest in improving American health care.

Each year, thousands of U.S. citizens graduate from international medical schools, hoping to return home to practice medicine. It's time we let them.

Dr. Fred M. Jacobs is executive vice president of St. George's University (www.sgu.edu). He is the former commissioner of the New Jersey Department of Health and Senior Services.