U.S. Steel is one of a handful of domestic steel manufacturers who have seen a significant bump in profits in 2018 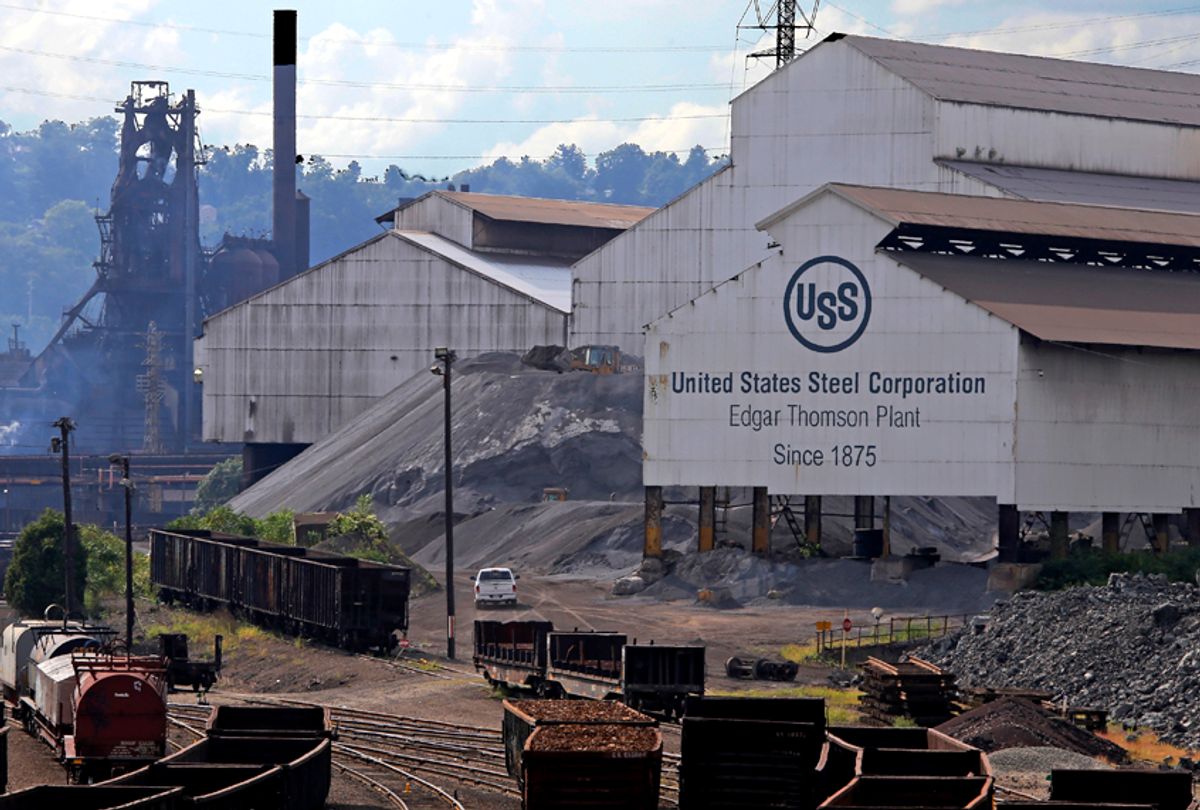 U.S. Steel is poised to rake in close to $2 billion in profits this year, and the workers who helped make that happen want their fair share of the wealth — as well as a way to shore up rapidly rising healthcare costs. That’s part of what prompted thousands of United Steelworkers to vote to authorize a strike vote, announced September 10, while engaged in contract negotiations with U.S. Steel at the company’s Pittsburgh offices. United Steelworkers represents over 16,000 employees who work at U.S. Steel plants in a handful of states from Pennsylvania to Texas.

The steelworkers’ current contract expired on September 1, and workers are now laboring under an agreed-upon extension of existing terms. The contract is a holdover from 2015, when earnings were down at U.S. Steel. At that time, workers agreed to a wage freeze, says R.J. Hufnagel, a writer and editor for United Steelworkers.

“It’s a different environment now,” Hufnagel tells In These Times, noting that because U.S. Steel is in a better financial position this time around, workers are expecting to have more bargaining power.

U.S. Steel is one of a handful of domestic steel manufacturers who have seen a significant bump in profits in 2018, thanks to increased demand for steel, as well as new tariffs imposed by the Trump administration. The tariffs have pushed up the cost of steel and helped pad the bottom line for large corporations such as U.S. Steel, a publicly traded company worth over $6 billion.

The question now is whether or not workers will share equally in the largesse generated by today’s boom times for steel production. Writing for the United Steelworkers website on September 10, Hufnagel argued that U.S. Steel management has scored “more than $50 million in pay and bonuses since 2015 while the hourly work force has not received a wage increase over the same period.” What’s more, he wrote, U.S. Steel also appears to be trying to squeeze workers when it comes to healthcare costs — a common theme in recent negotiations for United Steelworkers.

A September 12 contract negotiation update provided by United Steelworkers picks apart the latest offer from U.S. Steel, and includes a focus on healthcare coverage. The union alleges that U.S. Steel is no longer offering the current health plan workers have, which requires much less in out of pocket costs, and is instead trying to “bribe” employees into accepting a “high deductible high cost” insurance plan. In exchange, U.S. Steel has said they will reward those who switch to the high-deductible healthcare plan with an annual payout of $1,500 for the next six years.

U.S. Steel maintains its own negotiations website where the company's most current offers are posted. The latest update, dated September 12, states, "The revised six-year proposal, which we strongly believe is in the best long-term interest of all U.S. Steel stakeholders, includes a 14% base wage increase over the term of the agreement, guaranteed profit sharing, and healthcare premiums offset with transition payments."

While Hufnagel warns that contract talks are ongoing, and thus specific details are subject to change, he did acknowledge that healthcare coverage is a “major sticking point right now.” That’s because “U.S. Steel has made proposals that would increase members’ out of pocket health care costs by thousands of dollars per year,” Hufnagel says. This is in keeping with recent news reports documenting the rising cost of health care premiums for American workers.

Some examples of this include a 2017 Bloomberg News report which found that increasing health insurance costs are “eating up the wage gains won by American workers, who are being asked by their employers to pick up more of the heftier tab.” Reporter Zachary Tracer used government data and research from the Kaiser Family Foundation to show that, in recent years, “premiums for an employer-provided family insurance plan have climbed 19 percent, while worker pay increased by 12 percent.”

A 2018 USA Today piece also covered what it deemed the shocking cost of healthcare coverage for families, while also noting that the cost to employers is rising fast, too. Stagnant wages in the United States can be blamed in part on the increasing cost of employer-provided health care, according to reporter Guy Boulton.

The sharp rise in health insurance coverage fees is not the only point of disagreement between United Steelworkers and U.S. Steel. Bargaining team updates posted to the United Steelworkers website call attention to other disputes, including a potential change to incentive pay for hourly employees. Productivity-based pay bumps worth a few extra dollars per hour are not “perfect,” the United Steelworkers say, but they do form an “important component of compensation” that has been part of steelworkers’ collective bargaining agreements since 1947.

Now, United Steelworkers is concerned that U.S. Steel is trying to take incentive pay programs out of the union’s hands and “align” them with  management-controlled options, called Operations Incentive Plans. This would effectively put non-union and union employees under the same pay increase system — a system the union alleges has not been clearly articulated, except for a few key points such as this: “U.S. Steel’s CEO has the unlimited discretion to amend, suspend, or modify the incentive benefits.”

Hufnagel says it is not clear how long negotiations will take: It could be “weeks or months,” he cautions, while pointing out that the last contract talks, done in 2015, went on through December. The outcome, including any strike activity, is unclear as well, as the two sides continue their talks behind closed doors in Pittsburgh.