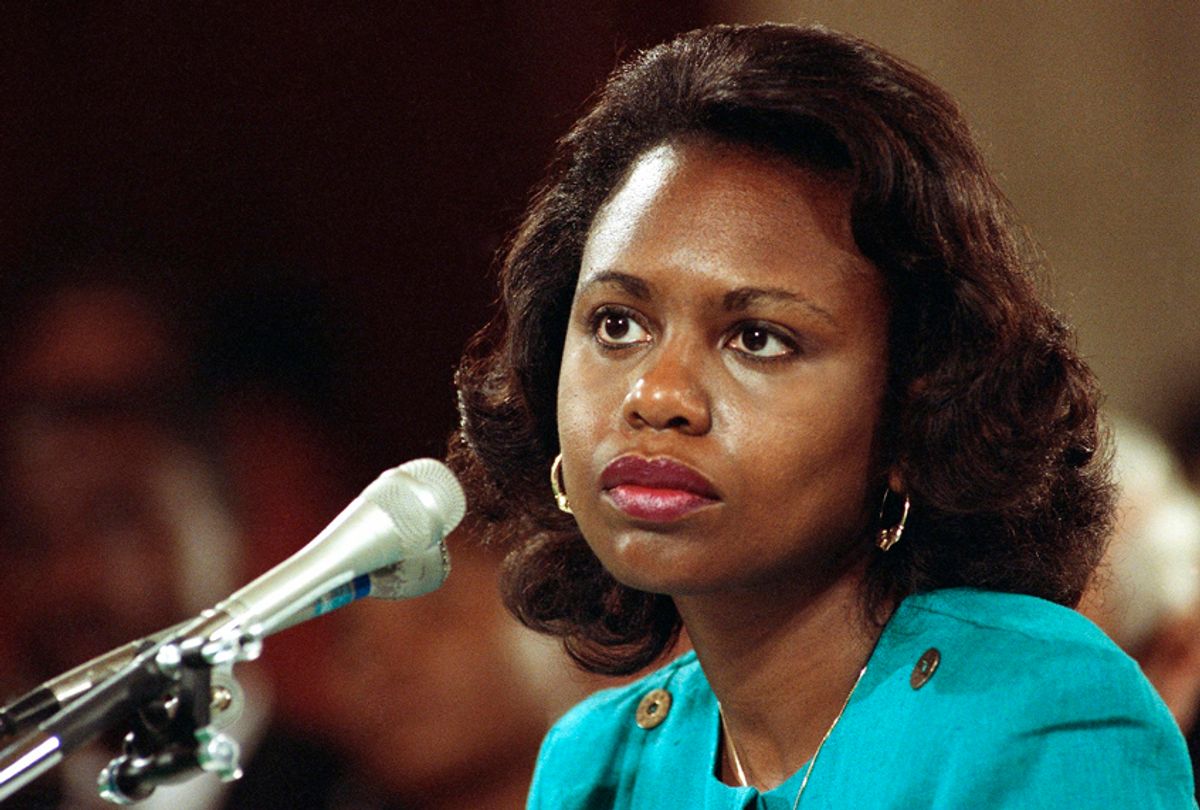 In 1991, when law school professor Anita Hill stepped forward to tell her story about being sexually harassed by then-Supreme Court Clarence Thomas, the right-wing noise machine sprung into action, ready to slander the even-keeled, intelligent Hill as a hysterical bimbo who was lying, delusional and/or perverted. Months, even years, after Thomas was confirmed, the defamation of Hill continued, suggesting that while justifying Thomas' confirmation was clearly important to conservatives, a larger goal was being served as well: Scaring future women with stories to tell into remaining silent.

Over the past three decades, raised awareness about both sexist stereotypes and the stigma of mental illness has blunted the ability to simply label a woman as crazy and expect that will be enough to make sure everyone stops listening to her. So the 2018 version of this bit of vitriol is repackaged it as concern for a woman's health and gentle questioning as whether she is so sure she knows what she knows -- and perhaps that a man who wasn't there would be a better judge of what actually happened.

As Heather Digby Parton chronicled for Salon last week, the idea that Blasey Ford is a bit tetched and must be confused about which guy allegedly groped her at a party has been gaining steam in right-wing circles, and was even floated in a recent column by the deplorable Kathleen Parker of the Washington Post. Last Thursday, Ed Whelan, a conservative lawyer and friend of Kavanaugh's who has spent days hinting he's got some blockbuster theory that will exonerate his man, unleashed a series of tweets with a surprisingly thorough amount of information about the lives of the classmates of Kavanaugh and Ford, in which he suggested that some other guy at Georgetown Prep was the likely assailant, but not Kavanaugh. He even posted photos of the man online, making any future defamation lawyer's job easy.

A number of right-wingers, unable to stomach smearing some random person during the apparently more noble task of speculating about the mental state of a private citizen, blanched at this. But Fox News and various other right-wing media outlets ran with the theory, even if they largely declined to plaster this man's face all over the TV. Despite Ford assuring reporters that she had not confused the two men (she said she knew the other guy well, and had once visited him in the hospital), Steve Doocy of "Fox & Friends" declared there was "zero chance" she knows what she's talking about. As in 1991, right-wing men with no expertise and no evidence feel confident is declaring they know better than a woman what's in her head and whether or not she is delusional.

It is worth noting, to make the mansplaining even more painfully obvious, that Christine Blasey Ford holds a Ph.D. in psychology and has done research at  Stanford University.

Whelan apologized for sharing the other man's identity. But so far he hasn't apologized for putting this evidence-free alternative theory out there. Now, of course, it has a life of its own, which was an entirely predictable outcome and quite likely the intention.

The only labeled picture of Ford in that yearbook depicts her wearing a sweater at a Halloween party. Another photo that, as Media Matters says, "neither the Infowars aggregation nor Cult of the First Amendment identified ... as Ford (nor did the original yearbook page, as shown on either site)" shows a girl doing a comical "sexy" pose. The girl in question probably isn't Ford, but Jones explained the pose as meaning, “I want you to climb on top of me right now," and demanded "big blown-up poster boards with Christine Blasey Ford spreading her legs in the high school yearbooks," which, again, are images that do not exist.

Even if such pictures did exist, they absolutely do not constitute permission to assault the woman in the photo. Taking a sexy photo, whether in seriousness or in jest, is not blanket consent to any possible sex acts in the future with any person who may desire them. After all, Jones himself is quite fond of stripping his shirt off on-air, and would certainly blanch at the argument that this means that any random man now has the right, at any point in time, to trap him in a room, stifle his screams, and try to rip his clothes off.

It's a small mark of feminist progress, one supposes, that more mainstream outlets like Fox News are shying away from pushing the myth that having sex — or even just acknowledging that sex exists — somehow makes a woman unrapeable. So far, only bottom-feeders like Jones have gone there, though there's always a fear that, as Republicans grow more desperate, they'll reach for even uglier gambits to discredit Ford.

Actor, author and activist on her Hollywood career, feminism and the #TimesUp movement