Why did the NRA support 3D-gun guy Cody Wilson for so long? He was always a shady character

The NRA supported 3D gun creator despite fundraising ties to neo-Nazis, and has been silent about sex charges 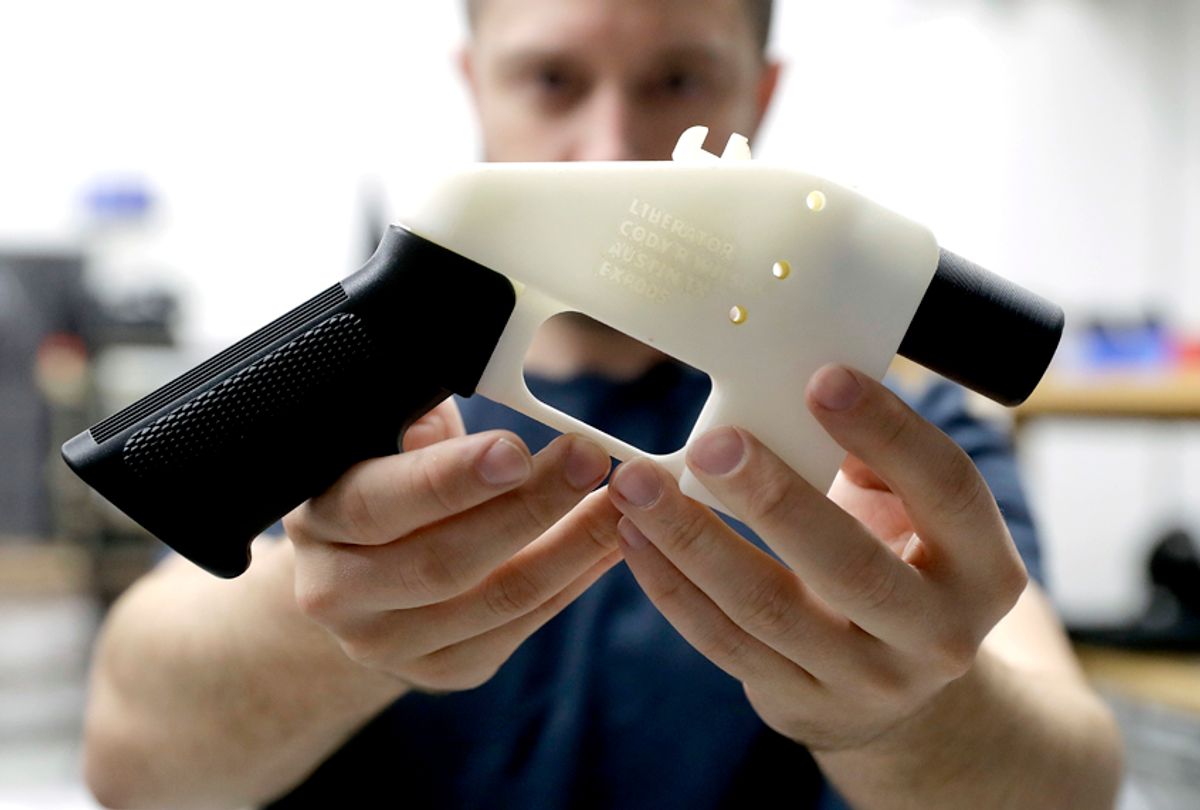 Cody Wilson, one of that new breed of young men whose career seems to be based on doing shady stuff on the internet, rose to national prominence mainly through the legal battles over his blueprints for 3D-printed  guns. Even though gun safety activists argued that the technology to make plastic guns at home would largely serve to empower terrorists and drug cartels, Wilson had remarkable success selling himself to the media as a freedom-loving anarchist whose views were more quirky than toxic.

Then Wilson was charged for sexual assault in Texas and went on the lam, cashing in his bitcoin (of course) for nearly $1 million and fleeing the country. Wilson, who was accused of paying a 16-year-old girl $500 for sex, was then arrested in Taiwan and deported back to Texas. He's now out on bond, and the whole seedy incident is shining more light on the question of who was involved in helping Wilson burnish his image as a respectable social activist with something to say. Even before this sex crime charge, Wilson's history was deeply troubling, but that didn't stop the National Rifle Association from repeatedly championing him as a freedom fighter worth admiring, rather than a character with an unsavory past and deplorable associations.

NRA spokeswoman Dana Loesch, in particular, has been aggressive in promoting Wilson, a man she referred to as "my friend" when she interviewed him at the end of July on NRA TV. Salon discovered that Loesch interviewed Wilson twice on her NRA show, once on her radio show and once more on her show on The Blaze, as well as taking a picture with Wilson and discredited gun researcher John Lott in 2013, on an occasion when she called Wilson one "of 2A's best."

It wasn't just Loesch, either. Her colleague Colion Noir also interviewed Wilson and another colleague, Cam Edwards, did a segment promoting Wilson's efforts to make it easier for people to get guns by printing them out at home. Let's note that not only bypasses the background check system used for handgun sales but also makes the guns undetectable to most metal detectors.

To be clear, there's no way any of these people could have known Wilson was going to be arrested for buying sex from an underage girl. But Wilson isn't just famous for the gun. He's also the guy who started Hatreon, a crowd-funding source modeled on Patreon that catered to specifically to white supremacists and other right-wing fringe groups who were having trouble getting funding elsewhere. And the NRA supported him anyway.

“Hatreon was disgusting," Heidi Beirich, the head of the intelligence project at the Southern Poverty Law Center, told Salon. "Cody literally stepped in and helped really bad people raise money, when the rest of the world, the PayPals of the world, cut them off. He knew exactly who he was facilitating, and he didn’t care.”

"This meant that he was a major source of funding for Nazis," she added, at least until Hatreon lost its ability to process funds through credit card companies, only months after the site was founded.

Wilson started Hatreon in June of 2017, and bragged to CNN Money about how high-profile Nazis and white supremacists were making money for him. His comments in that interview were self-contradictory. At one point, he justified his business by calling the American Nazi Party "a legal political organization in this country." But he also dismissed the impact of organized white supremacy by saying, "These people are at worst trolls, performance artists, provocateurs, vulgarians."

That interview was given not long after the summer 2017 white supremacist rally in Charlottesville, Virginia, during which a counter-protester was deliberately run down by a car, and white supremacists pulled guns on at least one person and severely beat another.

Despite the fact that Wilson positioned himself as a major funding source for white supremacists, the NRA continued to promote his work. Loesch hosted him twice on NRA TV in the months after Hatreon was started. In one of those interviews, she joked about how ridiculous it was that "all of the verified, blue checkmark journalists" consider Wilson "a very bad dangerous man." She also told him to "hang in there" and praised him for his courage.

“It was in the news, so obviously the NRA did not care, which is despicable," Beirich said, adding that the gun lobby is apparently "willing to be bedfellows with anyone -- and I mean anyone."

“The NRA has spent months embracing Cody Wilson and his efforts to distribute computer code that allows the automatic 3D printing of guns," Andrew Zucker, fmedia relations director at Everytown for Gun Safety, told Salon. "Now they owe it to Americans to say whether they still support him.”

The NRA did not respond to email or phone requests for comment.

Of course it's nothing new that the NRA is willing to align itself with the shadier figures in right-wing politics. In May, the organization hired Oliver North to be the organization's president, despite his leadership role in the Reagan-era scheme to sell weapons to Iran and funnel the profits to right-wing forces in Nicaragua. The organization has long had musician Ted Nugent on the board, despite his long history of risible and racist rhetoric mocking the victims of gun violence. He also wrote a long 2015 column celebrating the n-word. Nugent also has a grotesque history with underage girls, having reportedly become the legal guardian of a 17-year-old to gain sexual access to her when he was 30.

The NRA's willingness to associate with a man who profited off white supremacy fits into a long history of racially dubious incidents involving NRA officials, including vice president Wayne LaPierre's false claiming that "looters ran wild in south Brooklyn" (not actually a term New Yorkers use) after Hurricane Sandy. LaPierre also famously said, "Eight years of one demographically symbolic president is enough," as a description of Barack Obama's presidency and a rejection of Hillary Clinton's candidacy. He also promoted the infamous and false urban legend about the "knockout game," in which black teens supposedly knocked out white people for fun.

NRA TV host Chuck Holton also has a long history of racist rhetoric, suggesting that Black Lives Matter was ready to engage in terrorist violence and celebrating Donald Trump's win by tweeting that he wanted to scrub "Obama’s mochaccino stain off of America!"

Again, no one at the NRA could have known that Wilson would be arrested for a sex crime. But there was more than enough evidence to suggest, as Beirich puts it, that "Cody has essentially an amoral sensibility about everything." Wilson profited off white supremacists while joking about their activities, and argued that he was "sympathizing with southern white racists" who were defensive about pro-Confederate iconography in the wake of the mass shooting at a black church in South Carolina by a white supremacist in 2015. Cody Wilson was very bad news, and that should have been obvious. The NRA either couldn't see that or didn't care, and either way that speaks volumes about the organization's priorities.

Will guns and the NRA define the midterms?

Former Rep. Steve Israel on the dysfunction that drove him out of politics, and his hope for the future