WTF is wrong with Kavanaugh? Even conservative bro culture might not save him now

If the same scared little punk who appeared on Fox News shows up in front of the Senate, it’s over 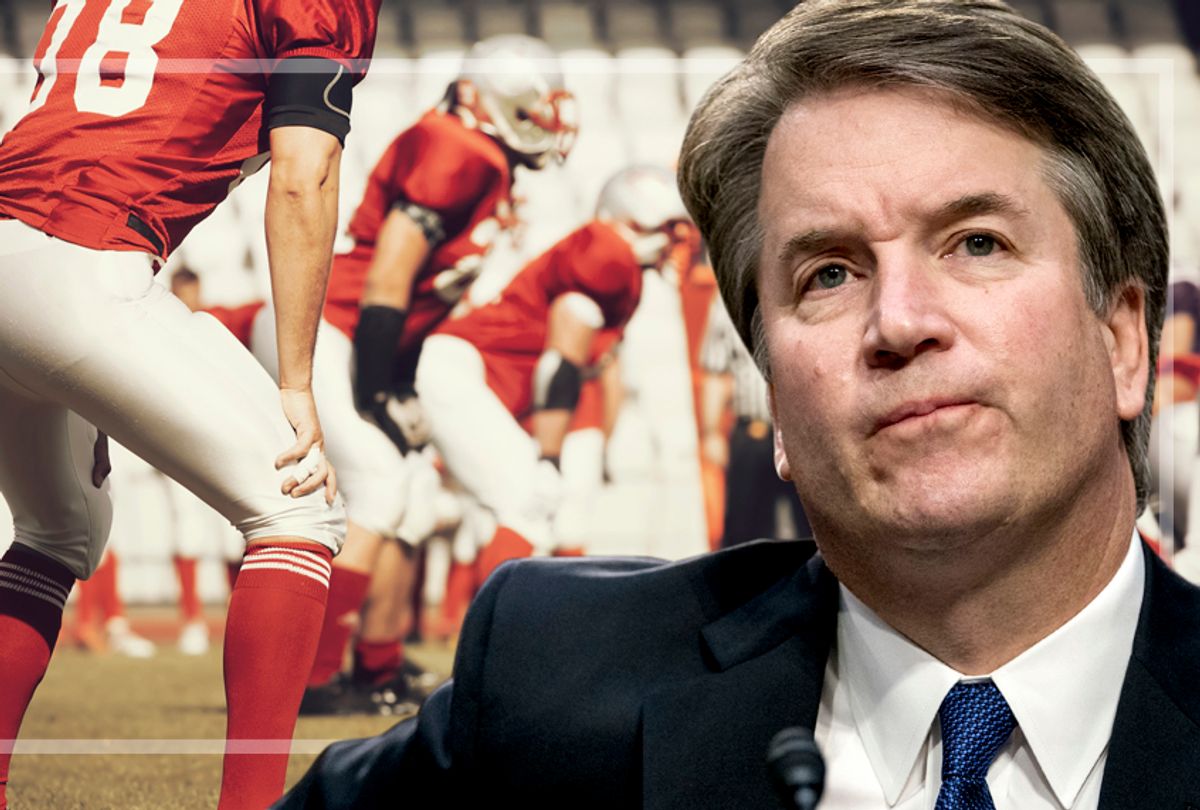 Would you join a club that has among its members and former members Antonin Scalia, Edwin Meese, Clarence Thomas, Robert Bork, Orrin Hatch, Ted Cruz, Samuel Alito, and Kenneth Starr? I mean, just look at that cast of characters: the judges among them believe you don’t have a right to privacy under the Constitution, and neither do the Senators or Bork, who was rejected by the Senate for the Supreme Court in 1987 because his legal views were so extreme. They believe corporations are “people” with the right to spend as much as they want to influence American elections. They believe the Voting Rights Act did too much to protect the rights of voters, so they removed its key enforcement authority. And they’re all basically fine with the idea that wealthy, white men ought to be running things in this country, and everybody else ought to stay where they belong and shut up.

The club these guys belong to is the Federalist Society, a right-wing legal fraternity hell bent on shoehorning its brethren onto federal courts. Brett Kavanaugh is one of its members, too. He joined back when he was in law school at Yale, and he’s been a member ever since. His name was among those submitted by the Federalist Society to Donald Trump when Anthony Kennedy resigned his seat on the court. The word that is used to describe the people on the Federalist Society’s list for the court is “vetted.” Everybody on that list was “vetted” by the Federalist Society to insure they would make the kind of Supreme Court justice they, and Trump, wanted. They’ve made no secret that they want a “conservative” on the court, describing someone who will vote the way they want him to vote. That means they wanted someone who will join the other four Republican appointees to the court and vote with the 5-4 conservative majority that has overturned so many long-settled areas of the law over the last decade.

That’s our Brett, all right. He’s a made-man in the Federalist Society. But the problem is, he was vetted for voting, but not for life.

At least Bill Clinton said “I did not have sexual relations with that woman” only once.

The interview on Fox came after several days Kavanaugh spent in the White House undergoing what were described as “murder boards,” during which he faced teams of people firing the kinds of questions at him he might face before the Senate Judiciary Committee later this week. Or the softballs he ended up facing on Fox, apparently.

This was Kavanaugh at his “most mechanical” said Lawrence O’Donnell on his show after the Fox interview had run. O’Donnell was too kind. Kavanaugh was as programmed as a humanoid robot, which must have made the Republicans on the Judiciary Committee happy.  Not only did he appear ready for the AI questioning he is likely to face on Thursday, he showed that the last 30 or so years of programming by movement conservatives, the Federalist Society, and the Heritage Foundation is likely to work perfectly once he gets on the court.  He walks like a robot, he talks like a robot, and he’ll vote like a robot, too, exactly the way they want him to.

Watching Kavanaugh navigate the minefield that had already been cleared for him by Fox on Monday night was nothing less than astounding. He was curiously incapable of expressing the emotion that would have been absolutely correct if his reputation was indeed being maligned by unfair and untrue allegations: anger. But Kavanaugh didn’t look angry. He looked frightened. He looked like he was experiencing what he should have gone through over 30 years ago when he was at Georgetown Prep. He looked like a cowardly little boy who had been caught doing something he knew he shouldn’t have done and was sitting on the couch in the living room inventing a pathetic story trying to make his excuses to his parents.

But Kavanaugh never had to sit on that couch because he never got caught. Not only did he get away with it, he peppered his Georgetown Prep yearbook with coded braggadocio he knew would be seen by his parents and school authorities. Along with the usual citations of participation in varsity football and basketball, Kavanaugh bragged about being the treasurer of something called the “100 keg club.” As “treasurer” of the club, it would have been Kavanaugh’s job to put together the financing to achieve the lofty goal of drinking 100 kegs of beer.  Using an inflation calculator, I figured the price of a keg of beer in 1982 was $53.38, based on today’s price of about $140.00. Who the hell had the $5,400 or so that it would have taken to buy 100 kegs of beer as a senior in high school? Apparently Kavanaugh and his pals did, obviously with the help of parental money.

Kavanaugh has not explained what he meant by referring to a girl by the name of Maureen as a “tainted whack.”  But his lawyers took a whack at explaining what he meant by the phrase, “Renate Alumnus.” According to the New York Times, this was a reference to having gone on a date with a girl by the name of Renate Schroeder, then a student at one of the nearby Catholic girls’ schools.

Fourteen other boys at Georgetown Prep also listed themselves as “alumni” of Renate, as well.  Ms. Schroeder, now known by her married name Renate Dolphin, told the Times, “I can’t begin to comprehend what goes through the minds of 17-year-old boys who write such things, but the insinuation is horrible, hurtful and simply untrue.  I pray their daughters are never treated this way.”

Whatever the rest of that stuff means, the fact that felt free to include it in the pages of his prep school yearbook tells us all we need to know about Kavanaugh being spoiled, privileged, arrogant, and untouchable when he was a young man.

Dr. Christine Blasey Ford, his prep school accuser — we have to distinguish at this point between incidents of sexual assault by Kavanaugh in prep school and at Yale — has said that Kavanaugh and his buddy Mark Judge hustled her into a bedroom at a so-called “house party” in Maryland and Kavanaugh pushed her on a bed and assaulted her. Turning up the music so no one could hear what they were doing, Kavanaugh tore at her, trying to remove her clothing, and when she tried to cry out, he covered her mouth with his hand. Ford said she struggled to get away but couldn’t until Judge jumped on top of Kavanaugh, interrupting the assault, and she was able to escape into a nearby bathroom.

She didn’t report the assault at the time to her parents, the school, or law enforcement authorities for all of the reasons most women and girls don’t report such sexual assaults, including the big one: fear that they won’t be believed. Kavanaugh was 17 at the time. Christine Blasey Ford was 15. Even now, 35 years later, she is not believed by many people. In fact, the kind of humiliation she feared would happen so many years ago has happened to her now, and more. Way more. She has received death threats and had to move out of her home because of the harassment she has been subjected to.

But not Kavanaugh. He hasn’t had to leave his home in fear of death threats. He’s been spending his days at the White House and with Fox News personalities. He might think that his integrity has been questioned and his reputation has been damaged, but he has his job as an appeals court judge, and he’ll still have it even if the Senate ends up rejecting his appointment to the Supreme Court.

He’ll be protected by the Federalist Society and by his prep school pals and fraternity brothers, because that’s the way things go in America, even in 2018. Men are brought up to surround themselves with barriers of bro-hood — schools and clubs and frats that can be counted on to protect you as a boy, as a young man, onward into adulthood. What that means along the way is that you can do pretty much whatever you want and get away with it.

You get what I mean. You go off to Vegas to attend a convention and one of your pals from work comes back to the hotel at zero o’clock in the morning with a couple of hookers and bangs on your door, and even if you don’t indulge, you’re supposed to laugh it off. Back at work the next week, you’re supposed to walk past his desk with the photo of the wife and kiddies laughing on the beach, and you just keep on walking.

Until it doesn’t. If Kavanaugh’s performance on Fox News Monday night is an indication of how he’s likely to do before the Judiciary Committee on Thursday (or whenever they get around to their promised hearing), Kavanaugh is going to wish that what happened at Georgetown Prep never happened at all. Because he’s not going to take his seat on the Supreme Court if the frightened little boy who showed up on Fox News sits down at the witness table on Capitol Hill. All the frat brothers and prep buddies and Yalies in the world aren’t going to be able to protect poor Brett then.