Did Republicans block another Kavanaugh accuser from testifying?

Report: Republican aide hindered one of Kavanaugh's accusers from moving forward with testimony 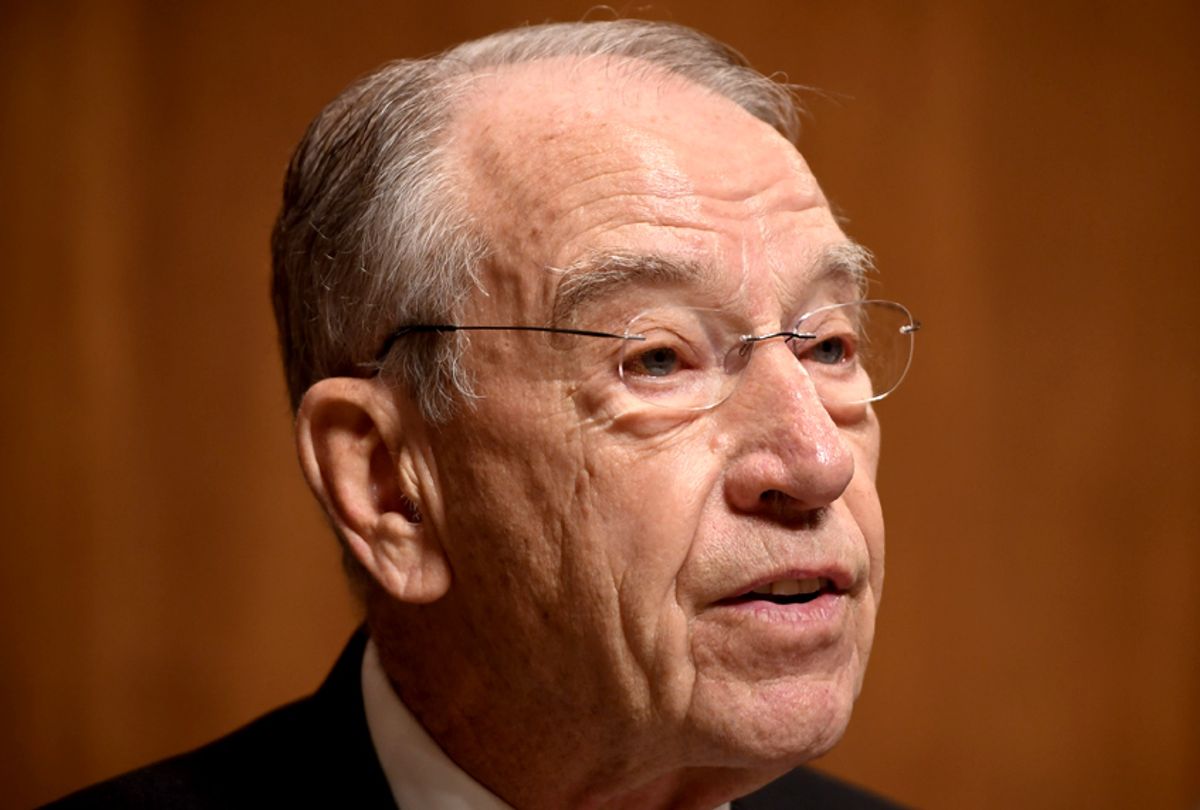 Republicans on the Senate Judiciary Committee repeatedly lamented a lack of evidence to corroborate allegations against Supreme Court nominee Brett Kavanaugh while Christine Blasey Ford testified on Thursday. Yet Dr. Ford was the only of Kavanaugh's accusers called to testify before the Senate on Thursday, even though another of Kavanaugh's accusers was reportedly blocked from access to such an audience by Republicans on the committee.

Although Chairman Chuck Grassley, R-Iowa, said that his staff had made "eight requests" for evidence from Deborah Ramirez's attorneys, complaining that "the committee can’t do an investigation if attorneys are stonewalling," according to emails obtained by the New Yorker, Grassley's description of the communication between Republican staffers and Ramirez's attorneys was misleading.

Ramirez's allegations against Kavanaugh were first published in the New Yorker on Sunday. The former Yale schoolmate of Kavanaugh's claimed that during a dorm party, he thrust his penis in her face and she was forced to touch it as she pushed him away.

Emails between Ramirez's lawyers and senior Republican Committee aide Mike Davis show that the "Republican aide declined to proceed with telephone calls and instead repeatedly demanded that Ramirez produce additional evidence in written form," the New Yorker reported. "Only then could any conversation about her testimony proceed. The exchange culminated in a breakdown of communication between the two sides, as Republican and Democratic staffers traded accusations of stonewalling."

While the Republican aide did reach out to Ramirez's attorneys not long after her allegations were published, he refused to speak with them on the phone. John Clune, her attorney, told Davis that Ramirez would "welcome" and "cooperate" with a FBI investigation into her claims and was willing "to be interviewed in person" under "appropriate terms." He suggested they get on the phone to discuss those details.

In multiple emails, Clune continued to try to pin down a date and time to address Davis' questions and Ramirez's testimony. Davis declined and reiterated his questions. "Before we discuss next steps, please answer the two questions," he said.

The back and forth between Clune and Davis went on, with Clune saying Ramirez did know of additional witnesses and Davis demanding her attorneys submit such evidence in the form of a letter, email or statement to committee investigators before he would move forward with a phone call. Davis also ignored Ramirez's willingness for a FBI investigation.

Heather Sawyer, a Democratic staffer, who had been on the email threads, wrote to Davis:

As you’re aware, Ms. Ramirez’s counsel have repeatedly requested to speak with the Committee, on a bipartisan basis, to determine how to proceed. You refused. I’ve never encountered an instance where the Committee has refused even to speak with an individual or counsel. I am perplexed as to why this is happening here, except that it seems designed to ensure that the Majority can falsely claim that Ms. Ramirez and her lawyers refused to cooperate. That simply is not true.

Davis responded, "I am not refusing to speak with anyone. I am simply requesting – for the 7th time now over the last 48 hours – that Ms. Ramirez’s attorneys provide the Senate Judiciary Committee with any evidence that they have before we move to the next steps."

One of Ramirez's lawyers then attached a letter formally requesting an FBI investigation, according to the New Yorker, saying "that Ramirez 'is willing to cooperate with the Committee,' and that her efforts to do so were being rebuffed."

A Republican committee aide told the New Yorker in a statement: "As a general practice, the committee requests to review any evidence or statement before determining how best to proceed with an investigation. This is necessary given the sheer volume of claims that the committee receives. Our staff asked on seven separate occasions over the course of 48 hours for any evidence or statement Ms. Ramirez would be willing to provide. Unfortunately, her counsels have not provided the committee with any such material to review."

But Clune countered the categorization. "Almost immediately in our correspondence, they became less interested in hearing from her and more interested in discovering what witnesses we could bring forward. Since it was only the majority staff that made these demands, as the minority staff questioned those demands as unprecedented, we became suspicious that any disclosures we might file would be shared inappropriately with Judge Kavanaugh or others to prepare and attack Debbie’s account," Clune wrote to the New Yorker.

"Since Debbie’s interest was in an F.B.I. investigation where Judge Kavanaugh could be questioned under oath, we didn’t feel comfortable releasing this information without their assurances," his statement added. "We continued to attempt to negotiate in good faith by submitting a lengthier letter providing more information as well as Debbie’s request for investigation. Other than replying 'received' on Thursday morning, the committee has not responded."

During Friday's committee meeting, Grassley said he "acted immediately" to investigateRamirez' charges and that his staff "repeatedly" tried to accommodate Ramirez as long as she provided evidence to back up her claim.