Smart Watch: Let's look at men via portrayals in "Mr Inbetween," "Insecure" and other TV shows

How does TV define masculinity for us? A number of ways, as these four series show us. 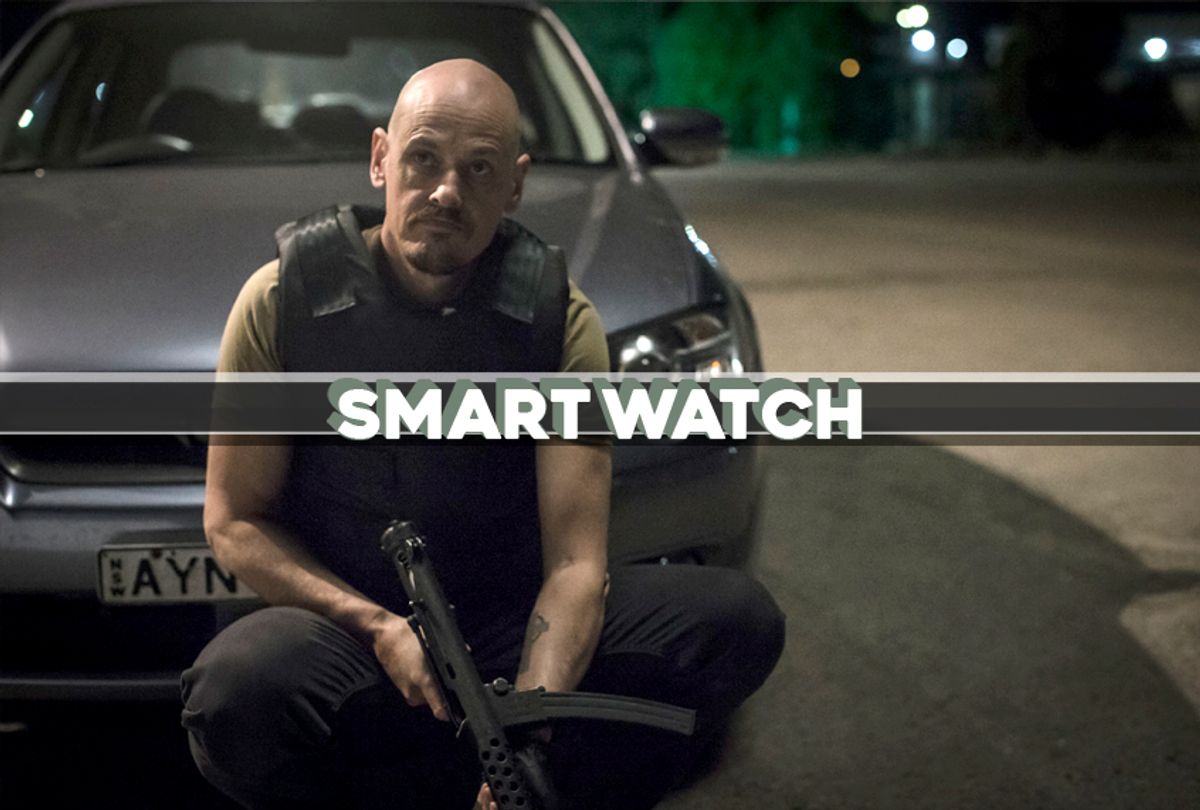 The battle of the sexes has been going on since the dawn of time but the last month or so has done nothing to edge us closer to peace, or even détente. If summer was defined by the female population’s hot rage, fall opened with a mighty flare up caused by a group of backwards-looking sexist grandpas tossing lighter fluid on the embers in the form Supreme Court nominee Brett Kavanaugh.

Good men – patient, caring guys who raised their hands when that Republican woman who dismissed Dr. Christine Blasey Ford’s sexual assault accusation asked, “What boy hasn't done this in high school?" — are getting singed in all this. Women who are tired of the sexism know good men and love them, and surely they must also know that it’s also annoying for them to watch a bunch of elected ambulatory skin tags sully their gender.

What all of this comes down do is how we view masculinity. Sadly for a lot people, our views of a man’s role and how he related to women is passed down through generations and reflected in popular culture. Television depicts a range of definitions of manliness, from the facile to the frustratingly complex.

However, one truth is that the best of these portrayals, characters loved by men and women, happen to be men who love women not expressly in a romantic sense but platonically. Women will never stop loving Captain Mal Reynolds from “Firefly,” or Ron Swanson from “Parks and Recreation.”

Women adore Randall Pearson and Jack Pearson on “This Is Us” because they are loving husbands and fathers. Women even harbor affection for the feckless nerds on “The Big Bang Theory” because they are gentle and smart and supportive of their wives and lovers.

What I’m saying is, we need to appreciate the men in our lives, even the flawed ones who are doing what they can. Maybe viewing a few TV shows about manliness can aid that mission.

To be clear, this an Australian made series, which also set down under, features a brand of masculinity that, well, not great. At the same time, it’s not the sausage bombardment that “Mayans M.C.” can be.

Written by and starring Scott Ryan, who spun six episodes out of his 2005 film “The Magician,” “Mr. Inbetween” invites us to travel along with a hitman named Ray Shoesmith (played by Ryan), who would seem to be the kind of antihero that Aughts-era dramas conditioned viewers to view as an intricate puzzle, the embodiment of the moral grey area.

Really, though, Ray is a simple guy. He doesn’t run his life by compartmentalizing so much as observing his own version of a code. Above all else, has no mercy for anyone who hurts women and children, particularly his own child, or a defenseless being.

“Mr Inbetween” is a modest time killer as those go these days. The entire season clocks in at under three hours, divided into efficient half-hour segments, two of which debuted last week. Its shortened length in no way shortchanges the viewer, though (Purveyors of extended hour-long episodic bloat, please take note).

That said, whether you love “Mr Inbetween” or are turned off by it hinges upon Ryan’s rendering of Ray. Because the short of it is, Ray is not a likeable, sympathetic guy like 2018’s most beloved TV hitman at the center of “Barry,” or seductive and cheeky Villeneuve of “Killing Eve.” He’s filthy around the edges and repels many of the women who know him.

But Ryan’s engrossing performance asks the viewer to contemplate what we value in masculinity, and the truth behind those values. In some respects Ray is a man’s man, a guy who cares for the people in his life who need him and can take care of business, and prevail, when necessary.

Off the clock, Ray is a caring father who spoils his daughter Brittany (Chika Yasumura) on top of caring for his brother Bruce (Nicholas Cassim), who lives with a degenerative muscular disease. Ryan also writes a love interest for Ray in a paramedic named Ally (Brooke Satchwell), who he meets cute in a park.

But if a man is measured by the company he keeps, nobody would want to be this guy. Only a few scenes after he’s hanging with his sad sack friends and partners in crime Vasilli (Jackson Tozer) and Gary (Justin Rosniak), while Freddy (Damon Herriman), the crime boss he works for, would seem to be lost without Ray — and, in fact, poses no threat to him whatsoever.

The most compelling aspect of “Mr Inbetween” and its central character study is Ray’s chilling demeanor — specifically, his smile. Regardless of whether he’s supervising a guy who’s weeping and begging for his life while digging his own grave, or comforting his daughter by confirming the existence of unicorns, his cool expression barely fluctuates.

Through Ray, Ryan suggests that popular ideas about what constitutes manliness and heroism also invokes a somewhat valiant view of violence, if applied in the service of justice.

Ryan delineates this in the fourth episode, when Ray finds himself in an anger management group. This scene has been described many times, and if you’re a regular FX viewer you’ve probably seen it in promos for the show. That’s because it displays Tao of Ray succinctly.

“I wouldn’t say I enjoy hitting people,” he tells the counselor. “You know, if I hit somebody, I generally have a pretty good reason.” And that reason, Ray explains, is that they were being assholes.

The world is full of assholes, the group counselor points out.

“Yeah. And you know why?” Ray asks, wearing his sinister, chilly smile. “Because people let ‘em get away with it.”

In this way “Mr. Inbetween” leaps back and forth between comedy and crime caper, tipping its hat at our darkest impulses all the while. The violence Ray metes out is explosive and jolting, but some base  part of the view may find his vicariously and emotionally purgative.

When he gets a job, he doesn’t think too much about the whys of it or agonize over consequence. Need a guy killed? Fine. Beaten just shy of his last breath? OK. Intimidation errands or straight-up murder, Ray takes them on with the same unquestioning attitude regardless of how plaintive his targets may be.

And the thinnest sliver of difference divides the implication of that smile: it looks just about the same when he flashes it at Ally or shows his fangs the men who are about to meet his fist. It’s just off-putting enough to make us consider why we prize displays of absolutes in the heroes who fascinate us, and which of their sins we choose to excuse.

People who love this series watch it to root for Molly (Yvonne Orji) and Issa (Issa Rae) and to enjoy the spit-take inspiring antics of their girlfriends Kelli (Natasha Rothwell) and Tiffany (Amanda Seales). So, yes, this is a female-centric series.

That said, “Insecure” also has one of the most thoughtfully developed black male characters on television in Lawrence (Jay Ellis), Issa’s ex-boyfriend who appeared to have left the series in season 2. His unexpected return in season 3, concluding Sunday, left fans divided as to whether the character should have been brought back.

That choice is worthwhile development in a comedy that portrays what it’s like to be a young, single, black professional in Los Angeles, particularly as those descriptors unfurl in Issa’s life. Season 3 has focused on Issa’s struggles to start over, and many of her struggles are the result of running back to familiarity, including trying to kindle something a kinda, sorta ex who catalyzed the end of her relationship with Lawrence.

But she eventually chose to leap forward instead of falling back, notably quitting her job at the culturally insensitive non-profit that tokenized and marginalized her at the same time.

The end of the most recent episode left us with Issa and Lawrence having a friendly conversation with one another, perhaps representing the start of a different relationship — maybe not romance, but friendship. Whether Lawrence has returned officially is a mystery, and we may not get a definitive answer in the Season 3 finale. But Lawrence represent an honest example of masculinity, blemishes and all, that remains rare on TV. He makes mistakes. But he also provides hope.

Speaking of anti-heroes, this series would not exist if not for the raging love affair viewers still have with Walter White and “Breaking Bad.”  And while “Better Call Saul” has been dealing out more Easter eggs telegraphing where its characters join up with their “Breaking Bad” incarnations, one of the more riveting explorations has been the slow transformation of the taciturn Mike Ehrmantraut (Jonathan Banks) from occasional problem solver to a fixer integral to a major crime network.

The Mike of “Breaking Bad” is quiet and gruff, uncompromising and deadly. But this Mike still has the softness of a grandfather holding on to the vestiges of the lawful man that he used to be. And that makes him a smooth talker, and an empathetic crime whisperer who’s slowly letting go of any indication of vulnerability.

And while we know where the road ends for, the air of tragedy surrounding him is a whiff from the future and a cloud in the present. He’s a different example of what a man does to take care of those he loves, without anger or blame and quietly bearing difficulty. Mike’s fate is not what we want for the men in our lives, but seeing it may provide some solace and understanding for the unspoken expectations placed on them.

Some shows are recommended due to their originality, intelligent writing, their merits as top series. And then there are shows we point out as a warning. This ABC series commits gaffes on several fronts, beginning with its blatant attempt to clone “This Is Us” or, more to the point, to get people similarly hooked on its ability as a crying laxative.

The difference between moving drama and manipulative melodrama is that the former inspires tears by speaking to some truths about human resilience and the ties that connect all of us, and the latter gins up stuff to sob over by hanging an entire plot off the unexpected suicide of an alpha male (Ron Livingston) who has wealth and influence and a generous spirit, and effortlessly spews Hallmark Card bromides.

In turn this leaves his friends Eddie, the philandering guitar teacher (David Giuntoli), Rome, the desolate and also suicidal filmmaker (Romany Malco) and Gary, the guy who has breast cancer — hey, men get it too! — to agonize over why their friend who had it all and paid for their hockey season tickets did what he did and how ever they will go on.

Projecting male sensitivity through drama scripts seems to be a difficult task for any writer who isn’t Shonda Rhimes, but this series is an example of how not to do it, in that it links men having feelings to crisis and misery. Relationship ennui and marital bed death are low-key obstacles here, but even worse is the way the premiere capitalizes on the disconnect between the four main characters and the wives and girlfriends in their lives.

On a positive note, while this visual blues opus won’t make you feel better about life, it might provide an example of how not to adult.