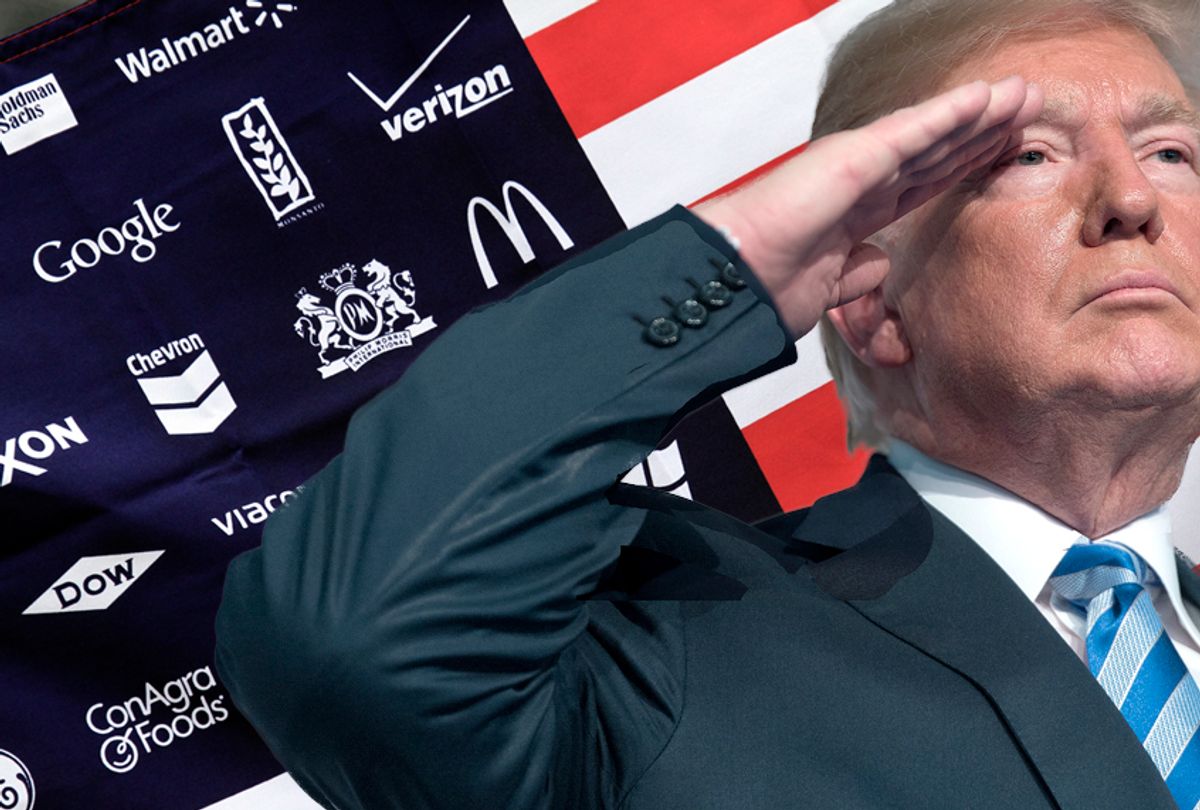 An American flag with corporate logos in place of stars is shown as several hundred demonstrators rally in Salem, Ore., Monday, Oct. 10, 2011. The demonstration is one of many being held across the country recently in support of the ongoing demonstration in New York. (AP Photo/Don Ryan) (AP/Salon)
--

On Friday, while the White House press corps was playing Dungeons and Dragons: the Judge Kavanaugh edition, President Trump was signing an $854 billion dollar spending bill with no reporters present. The almost $1trillion package included an obscene $674 billion defense budget.

The military spending spree includes Lockheed-Martin’s troubled F-35 which Popular Mechanics  described as a “trillion-dollar” albatross.  “For over two decades, the F-35 has been the symbol of everything that's wrong with mammoth defense contracts: behind schedule, over budget, and initially, over-sold,” reported the magazine.

READ MORE: Want to win as a Democrat? Don't blow off labor

In April of 2016, former Senate Armed Services Committee Chairman John McCain (R-Ariz.) called the F-35  JSF program “both a scandal and a tragedy with respect to cost, schedule, and performance.”

“In development for nearly 17 years and seven years behind schedule, total acquisition costs now exceed $406 billion, nearly double the initial estimate of $233 billion,” according to a report from Citizens Against Government Waste, a non-profit government accountability group.  “An April 2015 Government Accountability Office (GAO) report noted that the lifetime operation and maintenance costs of the most expensive weapon system in history will total approximately $1 trillion.”

CAGW’s analysis continues, “Unbelievably, the JSF program office, and members of Congress, appear ready to repeat this mistake yet again.  A June 5, 2018 GAO report found that major technological deficiencies still exist, despite the F-35 nearing the October 2019 timeframe when it will enter full production. According to the GAO, in its “rush to cross the finish line, the program has made some decisions that are likely to affect aircraft performance and reliability and maintainability for years to come.”

Throughout the 2016 campaign candidate Trump blasted military contractor Lockheed-Martin track record with the  F-35 tweeting in December of 2016 “The F-35 program and cost is out of control. Billions of dollars can and will be saved on military (and other) purchases after January 20th.”

Trump’s military build-up has been great for Lockheed-Martin. Its stock price closed at $239.27 the day before the 2016 election when all the “smart money” thought former Secretary of State Hillary Clinton was on a glide path to victory. The day after the stock of the world’s biggest military contractor climbed to $253.46. This past Friday it closed at $345.96 a share.

News reports about Trump signing the spending bills Friday credited the action with averting a government shutdown and as a sign that Congress was getting its act together because it had  actually crafted budget bills not continuing resolutions.

But with his signature Trump made it much less likely we will effectively confront global warming or prepare for the rising sea levels already upon us. This sets the stage for an even greater loss of life and property in the near and long term as storm surges come further inland with greater ferocity and we continue to experience extreme weather events like Irene, Sandy, Harvey, Maria and Florence.

It is not just that the military is itself the world’s largest consumer of fossil fuels and emitter of greenhouse gases. Consider an F-4 Phantom jet burns 1,400 gallons of jet fuel per hour.

What looms even larger is the huge lost opportunity cost we incur by not directing some of that DOD money to the planet’s most clear and present danger right now, slowing global warming and preparing for rising sea levels already underway.

Ironically, climate change is something the military itself is taking very seriously even if its Commander-in-Chief does not.  In January of this year the Department of Defense issued a report that assessed 3,500 sites they maintain around the planet. They found that 800 had been hit by drought, 350 with extreme temperatures, 225 endangered by storm surges and 200 by wildfires.

Back in 2016 the Institute for Policy Studies published “Combat vs. Climate-The Military and Climate-Security Budgets Compared”

making the case it was time to align our spending priorities more in line with the actual security risks we face. “The planet is heating up  ”the report asserts. “Fifteen of the sixteen hottest years ever recorded have occurred during this new century and the near unanimous scientific consensus attributes the principal cause to human activity.”

The IPS report suggested trading the F-35 program for building wind farms to power hundreds of thousands of homes.

As NPR recently reported here in the United States major infrastructure like airports are already at risk, with 13 major airports with at least one runway 13 feet from current sea level.  Bridges, tunnels, rail networks, highways, the planet’s entire physical plant is at risk.

And yet, we are still on Cold War autopilot still building tanks and jet fighters for an enemy we strain to invent so we can  justify the effort. And perhaps, the greatest travesty of all is that we are borrowing trillions of dollars to pay for it all.