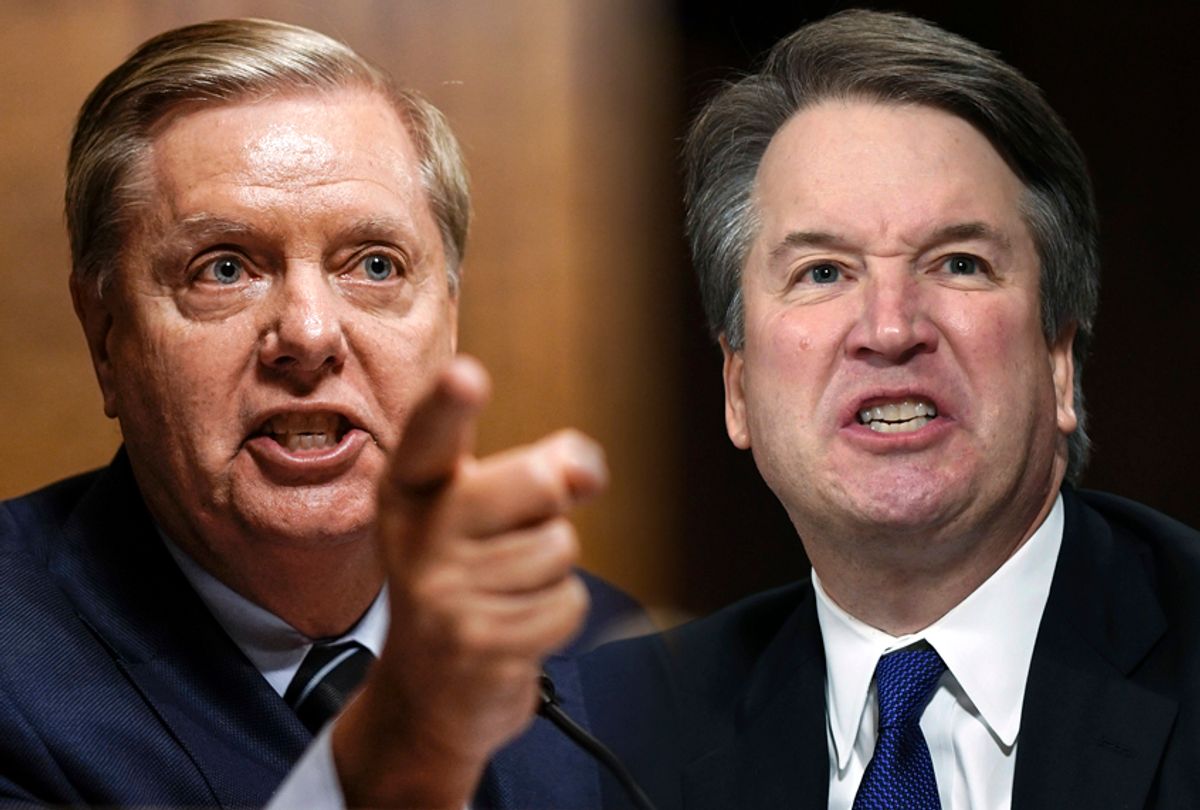 There has been a lot of discussion lately about women's rage. New York magazine's Rebecca Traister (a former Salon staffer) has written a timely book about it and has chronicled various aspects of the issue, most recently in the New York Times. Women are mad as hell, for sure. But if they want to see how powerful white men (and the women who enable them) leverage anger to dominate the rest of us, we've just had a potent demonstration of how that works.

The rhetorical violence of the right-wing response to the Brett Kavanaugh confirmation mess perfectly illustrates the "Don't make daddy mad" tactic of white patriarchy. Powerful white men may allow women and people of color to speak their piece but such people should never, ever think that they get to make the rules. If they refuse to back down when they're told to do so, there will be hell to pay. This is a familiar tactic to people who grew up in traditional, patriarchal families. Mother may complain and the kids will squabble, but when Father has had enough and puts his foot down, everyone must stop or face his wrath, which will be swift and often brutal.

This particular political temper tantrum has been building for about a quarter of a century, ever since Bill Clinton disrupted what Republicans believed was a lock on the presidency stemming from the glorious reign of Ronald Reagan. They considered Clinton an unreconstructed hippie who was illegitimately elected they treated him as such for his entire eight-year term, ending with that failed impeachment trial. They were furious that the public didn't back their play and when the 2000 election chaos ensued, they fought with everything they had and eked out a win. (Thanks to the Supreme Court, let us note.)

Since the Democrats pretty much cried uncle on that occasion, Republican anger settled down to simmer and they reveled in the soaring popularity of George W. Bush after 9/11, feeling their rightful dominance once again restored. That didn't last and Bush ended as a failed president, causing their rage to rise to unprecedented levels with the election of Barack Obama, our first black president. They pushed hard to make Obama lose his cool but he never did. He couldn't, of course. Any black man in America, especially if he's in a leadership position, must always stay in control lest he unleash the beast.

So right-wing male anger grew and grew, finding an initial outlet in the Tea Party wave election of 2010. Then Democrats made the fateful decision to push the envelope and try to force them to endure another leader who challenged their rightful roles, this time a woman. Recall the words of NRA executive vice president Wayne LaPierre, who said it out loud: "Eight years of one demographically symbolic president is enough."

Hillary Clinton had always made those kinds of men livid. She was an uppity feminist woman whose most enduring characteristic was that when she was defeated or humiliated she simply refused to shut up and slink away. (That trait annoys people to this day.) That she would deign to believe she could be president after they had dogged her with one bogus scandal after another, and even held her liable for her husband's personal weaknesses, was just too much.

Their anger boiled over and found a voice in Donald Trump, who ranted his way into the presidency, threatening to torture prisoners and deport foreigners and let the police "take off the gloves" and restore "law and order." He was known to have had no respect for women which he eagerly demonstrated from the get-go when he insulted Fox News' Megyn Kelly and Republican rival Carly Fiorina in highly gendered terms and just kept going. They knew he was the perfect man to destroy Hillary Clinton.

By the time he got to the 2016 Republican convention to accept the nomination, the party was in a full-fledged misogynist frenzy, chanting and screaming "Lock her up!" This was unprecedented. Conventions are always somewhat rowdy affairs, but a hall full of rabid Republican activists howling for their political rival to be jailed had never been seen before.

But it served a purpose that has served patriarchal societies forever. The whole country was on notice that if Clinton became president, the Republicans would go nuclear. The Washington Post reported before the election that they were already preparing to impeach her if she won. Trump himself made the threat explicitly over and over again on the campaign trail:

Hillary Clinton is the most corrupt person ever to seek the presidency, and if she were elected, it would create an unprecedented constitutional crisis. You know it’s going to happen. And in all fairness, we went through it with her husband. He was impeached. ... Folks, do we want to go through this again?

It is not unlikely that there were quite a few voters who felt a little bit sick at the prospect and decided it wasn't worth it. It's not an entirely irrational reaction. Life is short.

But as it happens, resistance to Trump's rule has been fierce, particularly among women who have apparently decided they've had enough. They took to the streets in massive numbers. Led by African-American women in places like Alabama where they faced down a man known for exploiting underage women, women have organized and set to work electing new representatives all over the country. The #MeToo movement certainly stemmed at least in part from the abject astonishment -- and rage --- that the Republicans would actually elect a man who had bragged about sexually assaulting women.

And now the Republican Daddy is ready to explode. Supreme Court nominee Brett Kavanaugh, an elite GOP operative who has been accused of attempted rape, has finally sent them over the edge. The threats are flying.

Sen. Lindsey Graham, R-S.C., the man who made his bones as a Clinton impeachment manager in the House, roared: "This happens to us; it never happens to them. But let me talk to my Democratic friends: If this is the new norm, you better watch out for your nominees.”

<style="color:#ee2c1d">READ MORE: Ford-Kavanaugh showdown is an important battle: But now progressives must fight the war

Sen. Tom Cotton, R-Ark., announced on "Face the Nation" that Christine Blasey Ford's lawyers might face "a D.C. bar investigation into their misconduct," adding that Sen. Dianne Feinstein, D-Calif., and her staff might also be investigated for leaking Ford's letter to the press. (Feinstein has denied doing this, to be clear.)

There's no word on whether he seeks to lock her up too.

And then there was Kavanaugh himself, who startled everyone with his temper tantrum and emotional manipulation at last Thursday's hearing. He blamed his political enemies, insulted Democratic senators and defied their questions, and threatening that Democrats were "reaping the whirlwind."

The message is clear. Everyone had better run for cover because Daddy's on the warpath and somebody's going to get hurt.

The problem with this tactic is that everything is already so crazy and chaotic that these kinds of threats no longer inspire the terror they're meant to. Perhaps this thrills their followers, but it doesn't scare scaring women or people of color anymore. In fact, it's motivating them to remove these out-of-control people from power. They aren't daddies at all. They are spoiled children having a temper tantrum. And they need a very long time-out.