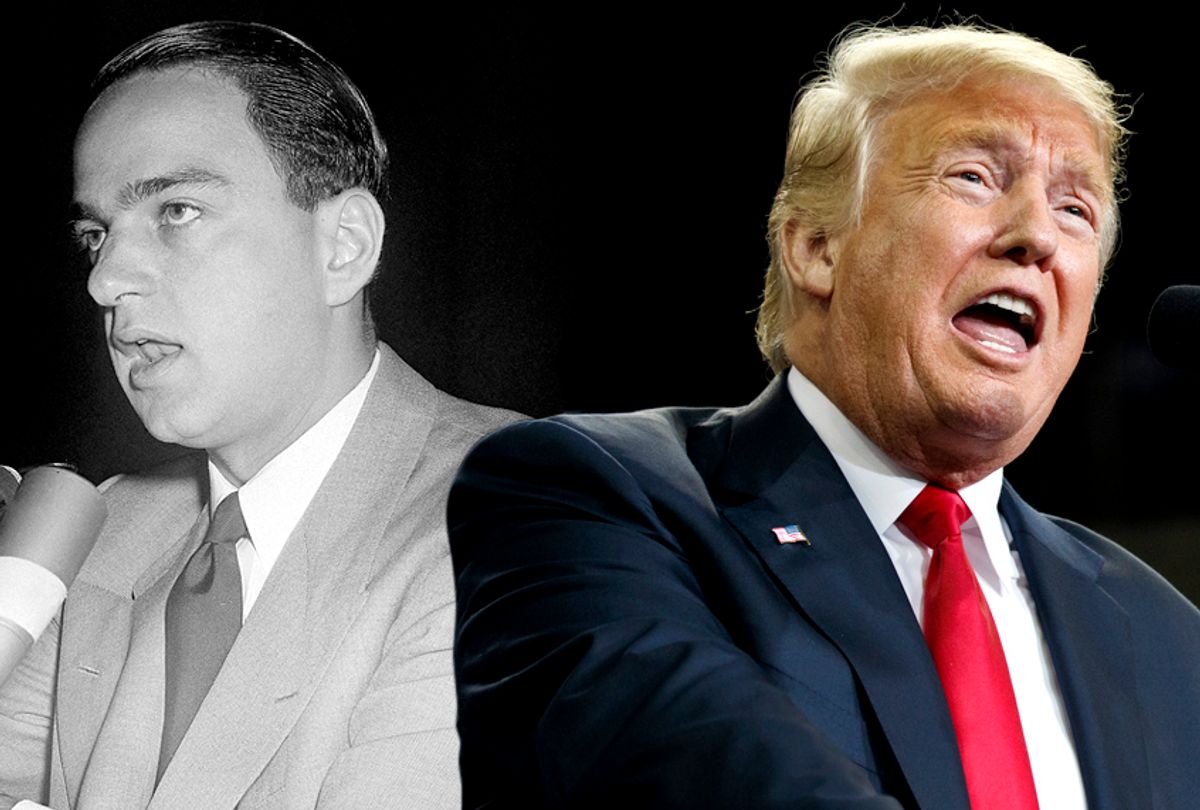 The day after Donald Trump was elected, “Frontline” filmmaker Michael Kirk  informed series executive producer Raney Aronson that he foresaw producing at least 12 films about this presidency before the end of Trump's term.

“Trump’s Showdown,” debuting Tuesday at 9 p.m. on PBS member stations, represents the sixth in this anthology series. Six films parsing everything from Trump’s strategy for wresting power from the Republican establishment ("Divided States of America") and muscling his way into the Oval Office (“Trump’s Takeover”), to what his surrogate represents (“Bannon’s War”) to our susceptibility to Russian influence (“Putin’s Revenge”), and more.

Remember, Trump’s administration hasn’t even hit its official two-year marker — and it’s a safe bet, given the maelstrom of uncertainty and passion surrounding Brett Kavanaugh’s Supreme Court nomination, that Kirk already is working on the seventh.

This installment, however, may provide the clearest context of understanding the likely moves to come with this presidency, legally and behaviorally, as we draw closer to what many fear may become a Constitutional crisis.

“Trump’s Showdown,” the culmination of 60 interviews with former heads of U.S. intelligence agencies, members and former members of Trump’s inner circle, reporters, authors and lawyers — don’t forget the lawyers — is a multiple-pronged study of the president’s concerted effort to discredit national intelligence agencies and the Fourth Estate.

But in large, Kirk trains his focus on the steps Trump has taken to defenestrate a number of key officials investigating his campaign’s connections to Russia and other evidence of corruption, opening with the moment former FBI director James Comey chose to inform Trump, then the president-elect, of the now famous “dossier” alleging that Russian intelligence had compromising material on him.

According to people who worked with Comey and accounts from Trump’s inner circle, this would be the first taste Washington D.C. officials would get of Trump’s aggressive and seemingly off-the-rails behavior: His reaction is to go on the attack.

This is standard “Frontline” structure, opening with a familiar story. But Kirk’s plot arc actually takes us back many more decades, to the 1950s and the Red Scare — and more specifically, to the McCarthy Era’s key architect Roy Cohn.

Trump’s early connection with Cohn, one of modern history’s more despicable creatures, is widely-known. Trump flaunted their relationship with pride in the early 1980s as he expanded his real estate holdings in New York City, using Cohn to force his way into the local political scene.

And while the two-hour film does not spend a lot of time on that part of Trump’s history, it is most essential to understanding the president’s strategy, why it sells with his base and why it is so dangerous.

Vanity Fair reporter Marie Brenner, who profiled Trump and wrote a lengthy story detailing the nascency of the Trump-Cohn relationship, which began in 1973, appears in “Trump’s Showdown” to list Cohn’s lengthy crimes, the building blocks of “the most sinister period in American history.”

Cohn never felt guilty about the fact that he ruined the lives of tens of people by dragging them before the House Un-American Activities Committee, even driving some to commit suicide. “It was sheer political and career expediency,” Brenner explains.

In many quarters Cohn's and Sen. Joseph McCarthy's actions were called “a witch hunt.”

In 1973, when the Justice Department sued Trump Management for refusing to rent apartments to black tenants, Cohn advised Trump and his father Fred to fight the suit. Though the Trumps were forced to settle, in the press Donald Trump and Cohn crowed that they had beaten the Feds.

This pattern of reacting with attacking metastasizes over the years and, of course, in the world of Wall Street, this disregard of reality becomes a symbol of dogged determination. Defeat in the court can be restyled as victory in a media landscape seduced by a playboy.

This was Cohn’s formula, adopted wholeheartedly by Trump. And, the film explains, through more than 4,000 lawsuits, Trump successfully employed that strategy. Always be on the offensive. Never admit defeat.

“In the old days, the sport of kings and queens was horseracing,” New York attorney Adam Leitman Bailey observes in the film. “Now, it’s litigation. And Donald Trump definitely played the sport. And he played it very well.”

“Trump’s Showdown” avoids mention of Kavanaugh; obviously there’s enough potential material on that subject to merit its own installment. But anyone desiring a deeper understanding of why a Supreme Court nominee would adopt a loud, angry, aggressive demeanor while defending himself against sexual assault allegations only needs to watch this study.

Kavanaugh was obviously channeling Trump when he came out the gate attacking, attacking, attacking and never giving ground. Knowing this strategy was passed down by the vile Cohn, and employed by a potential Supreme Court Justice, should scare the hell out of everyone.

Kirk’s film doesn’t say this this specifically but, you know, context. “Frontline” always adopts a methodical approach to reporting on government issues and developments that the public needs to know about. It does not break news, but rather, gathers it, adds new details and places it all in context.

But these tumultuous days have given all stories the shelf life of bananas left in a hot car on a sunny day. All the headlines and soundbites compiled to create “Trump’s Showdown” chronicle events that feel like they happened decades ago, not months.

For example, the film leaves viewers with a list of developments that occurred in mid-August, for the most part, although it does include snippets from the anonymous op-ed allegedly written by a senior White House staffer, and deputy attorney general Rod Rosenstein’s imperiled employment status.

And perhaps you may be thinking, “oh yeah, I remember that,” as if these are details from a distant life.

Set aside the Supreme Court furor for a moment, and naturally you may remember that within the last few months, a number of Trump surrogates have given testimony to special counsel Robert Mueller, who appears to be closing the net on Trump.

Famously Trump’s lawyer Michael Cohen publicly declared his loyalty to Trump — a guarantee Comey would not give — and swore he’d never give him up via incriminating evidence or testimony. But Cohen is made of a different kind of twisted substance than Cohn, Trump’s earliest legal consigliere. Cohn would never “flip.” Cohen changed his mind and has been talking to Mueller.

This too relates to the Kavanaugh issue: A number of experts posit that the reason Trump hasn’t cut ties with the embattled nominee is due to the judge’s views on executive prerogative, and specifically his opinion that sitting presidents are too busy to be subjected to criminal investigations or charges, or civil lawsuits, while they hold office.

The contextualizing of recent history must be more challenging for Kirk and “Frontline” now than in the past, and he admitted as much to Salon in an April interview.  Every day brings an avalanche of news, but only a small part of the landslides furthers the bigger story.

This may be why “Trump’s Showdown” feels jam-packed in comparison to previous chapters, although it’s not rushed. One gets the sense Kirk had enough to fill five hours or more instead of merely two; even so, the viewer never feels shortchanged. In this age where everything feels like too much, and there’s always some new detail around the corner, this installment is precisely enough to ready us for the next incoming.