Heather Havrilesky asks a radical, essential question: "What If This Were Enough?" 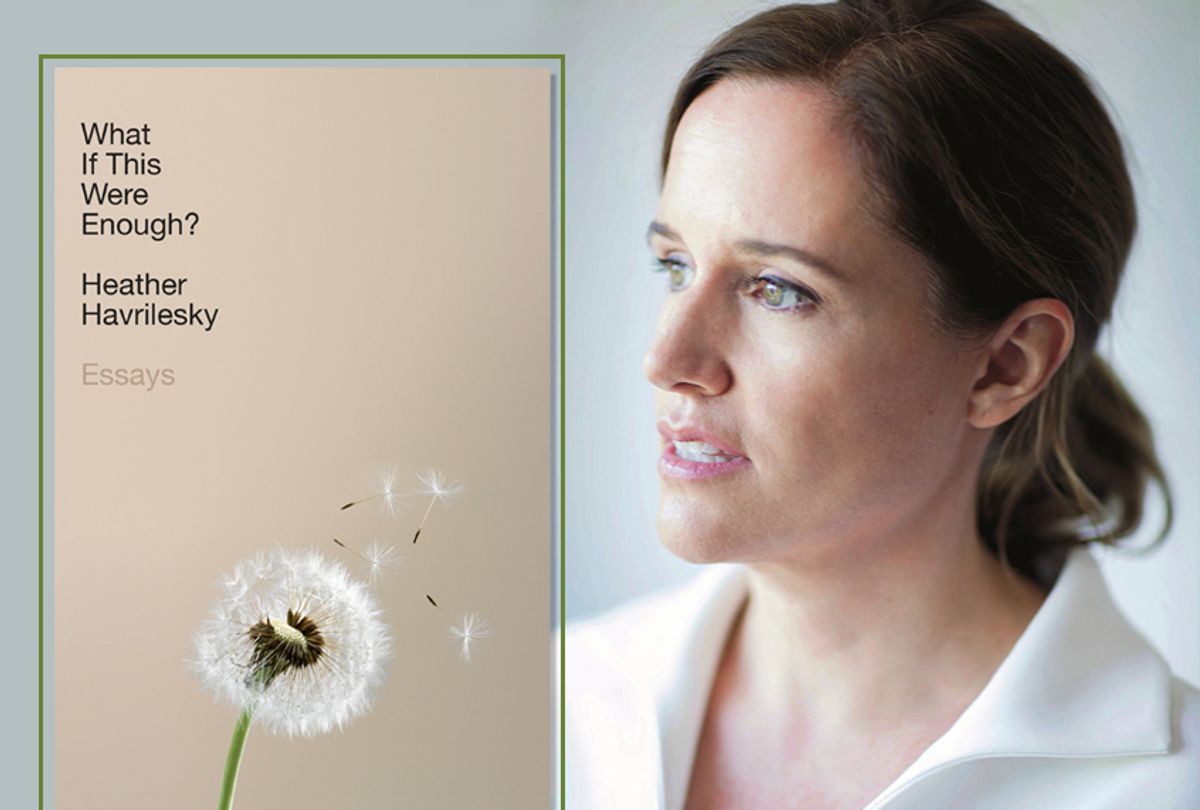 "What If This Were Enough?: Essays" by Heather Havrilesky (Penguin Random House/Willy Somma)
--

This year, some friends of mine started a regular gathering where we all get together and read the play “Our Town” out loud together. The Church of Grover’s Corners, as we call it, is open to amateurs, enthusiasts and professionals alike, even actual ministers who work in real churches. Casting is open, last-minute, and unconcerned with race, age, gender or type — I've read roles ranging from the milkman’s horse Bessie (the odd “neigh”) to Stage Manager, our deadpan guide through life in an unremarkable New Hampshire town. Thornton Wilder's play — experimental in its time, and now so frequently produced it's practically shorthand for "community theater" — seeks, without offering easy or sentimental answers, to reconcile the ineffable eternal with our tiny, fleeting human experiences.

Every Church meeting is different, but Emily Webb’s anguish in Act Three manages to move me to tears no matter who reads it. We’re all looking for evidence that it’s possible to “realize life,” as Emily puts it, while we’re living it — if not every, every minute, at least on occasion — despite the overwhelming cultural pressure to never be satisfied, to never stop grinding, to respect the hustle 24-7, to keep striving to live our "best lives," as reflected through our Instagram follower counts.

The Church of Grover’s Corners has become an indispensable practice for me in the ongoing attempt to live life in the present, not treat it as a rehearsal for some vague date in the indeterminate future. It’s a challenge that critic, essayist and advice columnist Heather Havrilesky also explores in her new collection of essays, “What If This Were Enough?” In 19 wry, insightful and compassionate essays, Havrilesky peels back the layers of late-capitalism malaise that bind us to the promise of some better version of ourselves lurking just beyond our reach, and dares us instead to accept our current, flawed lives, suffering and all, in order to settle into a less anxious and resentful present.

Havrilesky should know what's bothering us; she's written the beloved advice column “Ask Polly” for New York Magazine since 2012, fielding dilemmas ranging from wedding quandaries to "I feel empty.” She’s also an accomplished cultural critic (Havrilesky served as Salon’s TV critic from 2003-2010), and her expertise in relating TV and other pop culture narratives to how we live forms a throughline in the collection, from celebrating unlikely prophet Marie Kondo's message of ridding our lives of anxiety-inducing clutter to connecting the omnipresent moods of fear and anxiety in the luxury-driven worlds of "Mad Men" and "50 Shades of Grey" to the demented titillation of the Donald Trump presidency, the high-stakes water cooler TV show none of us can turn off.

READ MORE: V.S. Naipaul, Paul Theroux, and me: What I learned from reading about their tumultuous relationship

A stand-out essay on gender and “crazy” women, “Haunted,” connects Shirley Jackson’s masterful narratives of “the self-possessed woman [becoming] the possessed” to the trend of prestige TV shows conflating “complex” with “crazy” in their female lead characters, suggesting that a woman’s excellence at her job is almost always linked to her character flaws, not strengths. “I mean that these characters are often portrayed as volcanoes that could blow at any minute,” Havrilesky writes. “Or worse, the very abilities and skills that make them singular and interesting come coupled with hideous psychic deficiencies.” Complicated male protagonists like Don Draper and Walter White make “daring” choices, while Carrie Mathison and Selina Meyer are portrayed as being driven primarily by pathology. If you’re wondering what this essay has to do with breaking down the toxic cultural messages that reinforce self-loathing, you might not be a woman in the 21st century.

Astute cultural critics are plentiful these days, but rare is the sane, honest voice speaking out loud what you maybe felt about this party you've talked yourself into going to but now want to flee. Havrilesky does that without sacrificing kindness, which is one of her superpowers. She manages to retain a healthy skepticism of forced consumerist fun we're supposed to enjoy, like Disneyland and foodie indulgence — not to mention the dark survivalist fantasies of CrossFit — without spiraling into bitterness, and she balances a criticism of guru culture with self-awareness about the role an advice columnist plays in our collective quest for self-improvement.

"What If This Were Enough?" is a radical question in a culture that values the bottomless pursuit of wealth and status above the quiet acceptance of a good-enough life. The question shrugs off the banal answers of self-help, designed to make us think transformation is a formula to be mastered in steps, in favor of the toughest love to accept.

Last Sunday, at the Church of Grover's Corners, I read the part of Julia Gibbs, the mother of George who marries Emily who has her breakdown as she takes her place among the dead in Act Three. Throughout the first act, Julia is preoccupied with the idea of selling Grandmother Wentworth's highboy to an antiques dealer so she can use the money to fund a trip to Paris. Because I love to travel, especially to countries where, as Julia puts it, "they don't talk in English and don't even want to," I usually experience the Act Three reveal that she never took the trip as a loss, as a small but tragically unfulfilled dream. It doesn't help that Wilder doesn't shy away from the irony of that reveal when Julia can barely remember the money after she dies, let alone what she had once wanted to spend it on.

This time, though, I pictured Havrilesky stringing beans next to Myrtle Webb on her front porch, among the heliotrope and the clucking chickens, telling Julia Gibbs who's fretting about her highboy and her vacation, along with all of us reading along: "There is no 'better version' of you waiting in the future. The best version of you is who you are right here, right now, in this fucked-up, impatient, imperfect, sublime moment." Maybe that's not exactly what Wilder was trying to say that live people don't understand, do they? (No, not very much.) But I think it's a pretty sound practice nevertheless.

Books Editor's Picks Heather Havrilesky What If This Were Enough