The U.S. Defense Department is losing the battle against climate change

Underfunding, lack of strategic planning and denialism are hindering the DoD’s climate response 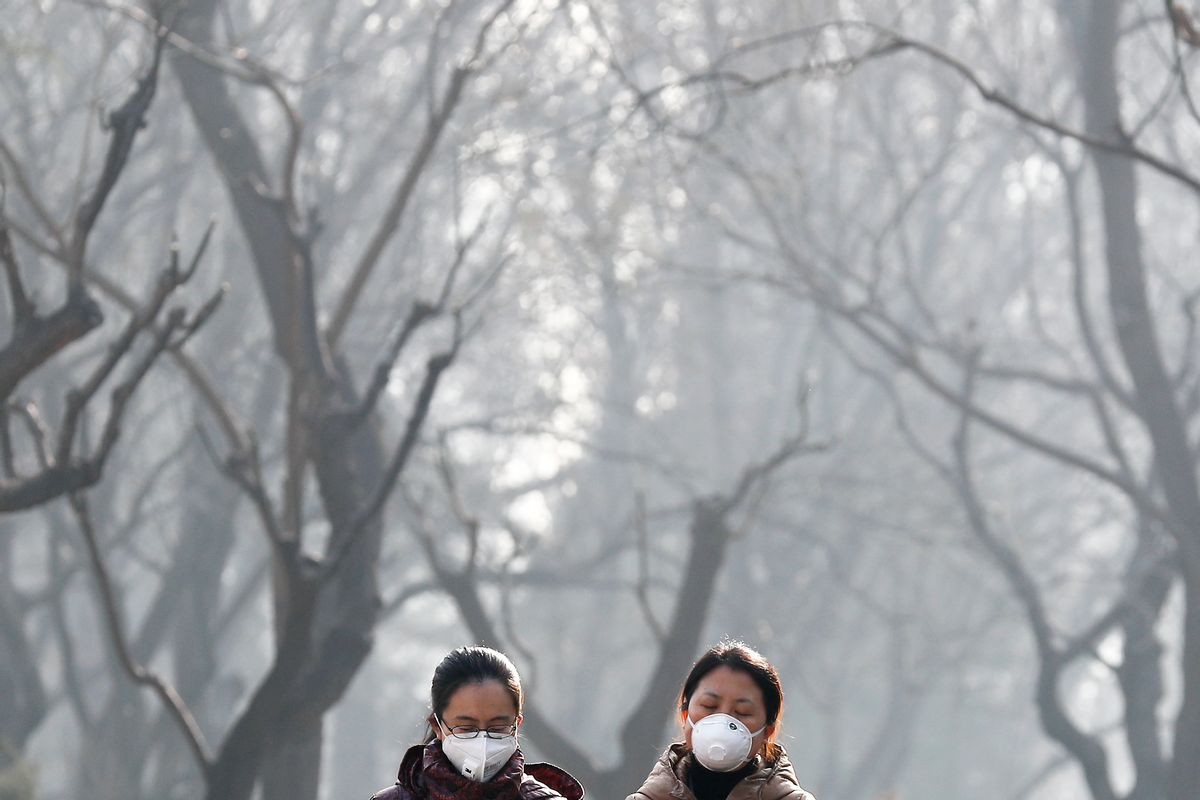 This article was produced by Earth | Food | Life, a project of the Independent Media Institute, and originally published by EcoWatch.

In 2013, a late summer monsoon rainstorm struck Fort Irwin, in California, flooding more than 160 buildings and causing extensive damage that took weeks to clean up. Some buildings were out of commission for months.

The 2012 Waldo Canyon Fire, one of the most destructive wildfires in Colorado’s history, only narrowly missed Peterson Air Force Base. The fire cost some $16 million to battle.

These are just some of the findings that make up a US Department of Defense vulnerability report, published earlier this year, looking at the impact of climate change on more than 3,500 military installations. Its conclusion? That more than half of these installations are affected by flooding, drought, winds, wildfires, storm surges and extreme temperatures. Drought proved the single biggest challenge to the military, affecting nearly 800 bases. Next up was wind, which affected more than 750 bases, while non-storm surge-related flooding impacted a little more than 700 bases.

“As an institution, the military sees climate change as a threat to what they do on multiple levels,” said Michael Klare, professor emeritus of peace and world security studies at Hampshire College. “It’s a threat to their bases. It’s a threat to their operations. It creates insurgencies. t creates problems for them. They’re aware of that, and they want to minimize those impediments.”

Indeed, climate change has long been on the military’s radar. It was the George W. Bush administration, for example, that required the Defense Department to procure 25 percent of its energy for its buildings from renewables by 2025. Even President Ronald Reagan received military memos warning of global warming. While in 2014, the department published a roadmap establishing an outline to deal with the threats from climate change within the military, as ordered by then-President Barack Obama.

Although President Trump’s administration is known for its climate change denialism, major figures within the military are still noticeably vocal about the issue. In February, Director of National Intelligence Dan Coats warned in a Worldwide Threat Assessment that the impacts from global warming — more air pollution, biodiversity loss and water scarcity—are “likely to fuel economic and social discontent — and possibly upheaval — through 2018.” Defense Secretary Jim Mattis has been called the “lone green hope” for his long-established views on the threat of global warming.

Given the immediate threat of rising sea levels, the US Navy is leading the charge to better understand these impacts at the ground level. Last year, a Navy handbook provided a planning framework for incorporating the threat of climate change into development projects at Navy installations. To put this into context, a 2016 Union of Concerned Scientists (UCS) analysisof 18 military installations along the US East coast and the Gulf of Mexico found that by 2050, most of these bases will experience 10 times the number of floods than they do currently. In about 80 years, eight of the bases could lose as much as 50 percent of their land to rising seas. Naval Air Station Key West, in Florida, could be almost entirely underwater by the end of the century.

“We did use the high sea level rise scenario because generally, the military has a low tolerance for risk,” said Shana Udvardy, UCS climate preparedness specialist and a co-author on the study. “And we’re basically on track for the high scenario because of the rate of ice sheet melting. It’s very likely to happen, and it’s after mid-century that we’ll really see the changes in the extent and frequency of tidal flooding.”

According to US Geological Survey scientist Curt Storlazzi, who has studied the effects of global warming on military installations on the Marshall Islands for the Defense Department, the twin impacts of rising sea levels and storm waves will increase the magnitude of flooding there by “double” in the next couple of decades. “That’s going to negatively impact both the military and civilian populations,” he said. “That’s the big takeaway — most civilian and defense infrastructure doesn’t do well with salt water.”

The Center for Climate and Security, a non-partisan group of defense and national security experts, continues to study the myriad threats of climate change on the military. In this recent report, the group outlined how extreme weather patterns will expand the department’s role in tackling national and global security threats, highlighting how humanitarian assistance and disaster relief missions are “increasingly important responsibilities for military commanders around the world.”

But former Rear Admiral David Titley, professor of meteorology at Penn State University and an expert in climate change, the Arctic and national security, argues that the military as a whole has yet to really grapple with the problem of climate change in any long-term strategic way, nor has it looked at how to cost-effectively prioritize resources—views mirrored in a recent Government Accountability Office report.

Change could be on its way in this regard. Rep. Jim Langevin, the ranking Democrat on the Emerging Threats and Capabilities Subcommittee, pushed through an amendment in the 2018 defense spending billdirecting the Defense Department to identify the 10 military installations most vulnerable to climate change and to identify ways to mitigate the forecasted damage. “You would argue that that’s where you put your first dollar towards buying down the risk,” Titley said. “There may be bases that have higher climate vulnerability, but the impact may not be that big a deal relative to others.”

Langevin also included a provision in the 2019 defense spending bill requiring the department to factor energy and climate resiliency efforts into major military installation plans. But Titley is circumspect about the Defense Department’s overall ability and willingness to institutionally get to grips with the problems climate change poses. “We’ll see whether the department of defense actually does that or not,” said Titley. “There’s no real leadership on this issue.”

Miriam Pemberton, a research fellow at the Institute for Policy Studies, a progressive think tank, said that the military’s public overtures on climate change ring a little hollow when stacked up against the actual dollars directed toward green initiatives within the military—efforts like biofuel to power aircraft carriers and solar energy in combat zones.

According to an Institute reportfrom last year, “Combat vs. Climate,” the ratio in military spending in 2017 to deal with regular security threats versus climate change was 28:1—a slight improvement on the 2015 ratio of 30:1. But as the report finds, “spending 28 times as much on traditional military security as on climate security is hardly commensurate with the magnitude of this ‘urgent and growing threat,’ as the military has defined it.”

Further, while the military’s budget grew by $61 billion in 2018, the amount of money the department continues to funnel toward green initiatives and renewable energies hasn’t grown proportionately, said Andrew Holland, the American Security Project’s director of studies. Nor does the military, he said, see its primary mission as tackling climate change. Indeed, the military is the world’s largest institutional consumer of fossil fuels. Last year, the department used more than 85 million barrels of fuel to power ships, aircraft, combat vehicles and contingency bases. The cost? Nearly $8.2 billion.

“We have a military whose job is to fight and win America’s wars,” Holland said. “But where you can take clean energy initiatives that fight climate change and also increase the military’s operational ability to fight and win those wars, that’s a double win.”

Another obstacle is that there’s no “line item for climate change” within the defense spending bill, said the UCS’s Shana Udvardy. “So, it’s really up to each installation to figure out where they’re going to get the resources, and which resources they’re going to allocate to these types of adaptation measures,” she said. What’s more, both Udvardy and Holland agree that the military has recently grown increasingly secretive about its green initiatives, for fear of retaliation by the White House.

Trump has already pulled out of the Paris Climate Accord, for example, and signed an executive order rolling back all Obama-era climate change related actions within federal agencies. There are notable signs that this has trickled down to the Defense Department — the latest National Defense Strategy had been scrubbed clean of any reference to climate change, for example.

“None of us have any clue as to how bad it’s going to be,” said Michael Klare, about the impacts from global warming. “But this something that the military does understand better than most people — it’s not the polar bears we should be worried about, it’s about whole societies that are going to collapse and send out waves of migration, which we’re seeing already.”

Daniel Ross is a Los Angeles-based journalist with bylines in Truthout, the Guardian, FairWarning, Newsweek, YES! Magazine, Salon, Vice and a number of other publications.