Brett Kavanaugh and Christine Blasey Ford could both be "right": A war of gender narratives

Both people may believe they are telling the truth. Too often in our society, the male narrative is what matters 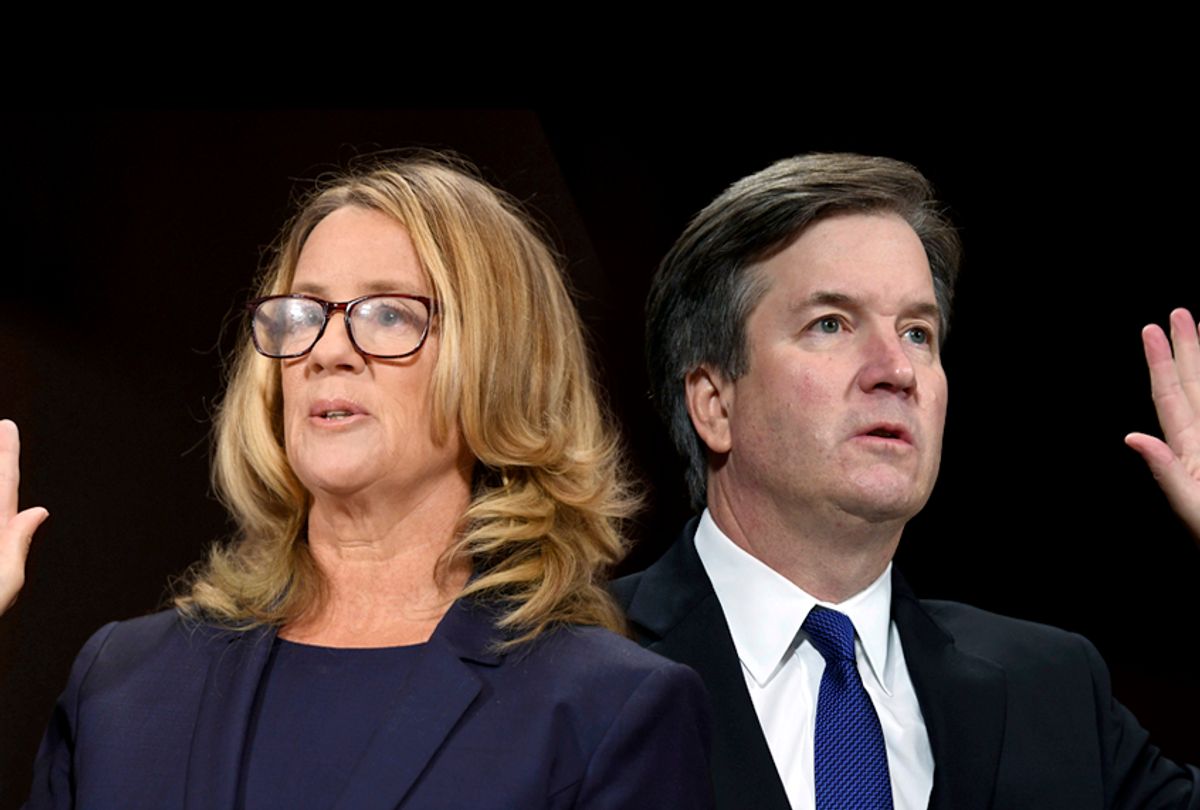 In any legal dispute, both parties are right — in their own minds.

What if they are both right in their own minds?

Most men who rape and sexually abuse may actually believe that they are innocent. It's why it's such a hard crime to prove. Typically, in many such cases, the prosecution must prove beyond a reasonable doubt that the accused intended to act without the victim’s consent. The offenders’ state of mind matters both in society and in our criminal law much more than the survivor's state of mind. What is consensual in the mind of a drunken teenage boy differs from what is consensual to a scared, possibly already abused and harassed teenage girl.

The individual crime injures the victims psychologically, in large part simply by sending the victims the message that their perception is either unreal or irrelevant. Their own inner mind gets replaced by the offender's state of mind. In turn, that sends a message to women throughout society that our perspective is unreal and irrelevant. That message gets further reinforced given that most media moguls, news producers, TV and movie producers, writers, directors, publishing heads, novelists and judges are male. They create our cultural narrative about life, the world and the law, and they nearly always tell the story from a male point of view.

This cultural narrative works so effectively that many women are unaware that they were abused at all. The societal narrative convinces women that: 1) he didn't really mean it that way; 2) we must have imagined it; 3) our memory must be failing us; 4) all men behave that way, and we must accept that to get along; 5) we are shrill, overly-sensitive, unattractive, prudish feminists if we fail to consent to sexual interaction we dislike -- or even if we dislike it at all; or 6) we really did ask for it and must blame ourselves.

In my own situation, my pediatrician sexually abused me. Even after working as a child protection lawyer for years, it took me decades to realize that my own traumatizing exams were sexual abuse. He said the constant probing was necessary, so I just thought that that necessary medical exams themselves were traumatizing. Even now, I seek reassurance and ask experts over and over whether his actions were part of a normal well-child exam. My rational mind knows they were inappropriate and abusive, but my gaslit trauma brain still questions.

If we speak out about this abuse, we face social ostracism, physical threats, psychological torment and threats to our financial survival. So some women can become complicit or enablers. Given how trauma works, I want to empathize when these women do so, while still helping women on all sides of the political spectrum to overcome these messages.

Even when we internalize male perspectives, a survivor female’s or non-binary person’s experience can differ from the prevalent male experience. Males may be unaware of the many ways our differing experiences shapes both our internal state of mind and our external behavior. We females receive messages like, “Why buy the cow if you can get the milk for free?” This analogy implies that our “milk” is our sexuality, and “buying the cow” means “getting married.” The saying implies that the only reason to marry is to have sex. Thus, society conditions women that to have value they must be sexually desirable. They must also be nice and friendly. If we appear both sexy and friendly, some men will be interested in us. Since our state of mind is irrelevant in this societal equation, their interest translates to our consent.

In determining our consent, men also can mistake our flight, fight, and freeze reactions. The #MeToo movement shows how prevalent sexual abuse and sexual harassment are. Such abuse and harassment often induces post-traumatic stress, which is unpredictable and can cause us to flee, fight or freeze. Society conditions us not to fight: It’s considered “unattractive” and masculine and moreover, we may be at a disadvantage in a physical conflict. Likewise, society conditions us not to flee — it tells us that we are overreacting hysterical females. When faced with a sexual threat, our amygdala, the flight or fight portion of our brains, takes over and floods the body. While our response can be unpredictable, sometimes it’s to freeze. Far fewer males have this sexual threat experience and some may interpret “freeze” as consent.

Society erases our own perspective regarding our consent. On Thursday, Sept. 27, a group of male senators expressed rage at being confronted with a female perspective on attempted rape. This outrage at one woman’s mere attempt to convey her experience silences and intimidates all women.

If the Senate allows an alleged rapist and sexual assailant to help write our society’s legal narrative for decades to come, our country will continue to erase the female experience. Brett Kavanaugh may sincerely believe he is innocent. He may even have blacked out and forgotten the events in question. Nonetheless, the survivors have credibly relayed their multiple allegations and included corroborating details, some of which are verifiable, such as the clear evidence that Kavanaugh frequently drank to excess.

Kavanaugh has himself responded with misrepresentations about our legal system and about known facts. For instance, he has tried to describe statements that people do not remember a party that occurred 36 years ago as assertions that the party itself -- and therefore the attempted rape -- never happened at all.

Despite the fact that our financial, government, media and pop culture realms remain predominantly male, females have begun to reclaim their voices, in grassroots fashion, by way of the #MeToo movement. Let us hope that will lead to an equal opportunity to tell stories from a female perspective in positions of power.

Cathren Page has advocated for sexually abused children both as a private attorney and as a trial and appellate attorney in the Texas child protection agency’s state headquarters. She holds an MFA in writing for children and young adults and is now a law professor in Orlando. She has published numerous law review articles on legal narrative and has spoken about the subject internationally.