It's not just Brett Kavanaugh: Gender is increasingly a partisan issue 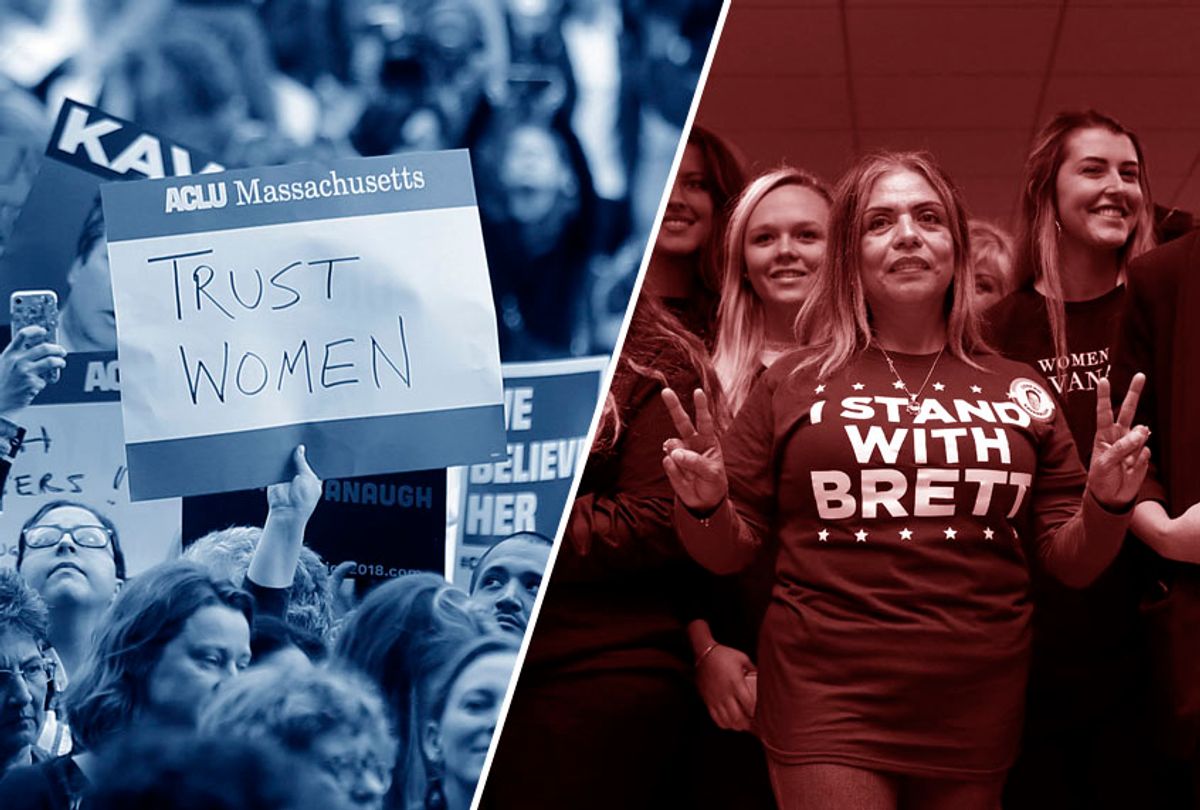 Speaking to reporters outside the White House on Tuesday, Donald Trump declared, "It's a very scary time for young men in America," in reference to the growing #MeToo movement and the increased pressure to hold men accountable for sexual harassment and violence. This comment echoed his son, Donald Trump Jr., who said earlier that he was more worried about his sons than his daughters in this political climate.

This is part of a rising narrative of men's supposed anger and fear over women's growing courage over the issue of sexual abuse, epitomized by Republican pollster Frank Luntz warning that men "believe that justice no longer exists in America, that the accusation is enough to destroy someone’s career and someone’s life." When questioned about these fears, men who express them — like Trump — resort to talking about "false" accusations. Since those continue to be few and far between, the likelier explanation is all this anger stems from a belief that women owe it to men to stay silent about abusive behavior, and that those women who behave differently are traitors.

But is this really a man vs. woman thing? A new study from the Public Religion Research Institute (PRRI) complicates the picture quite a bit. In reality, skepticism about sexual harassment and a willingness to side with men who are accused — even in the face of overwhelming evidence of their guilt — is shaped more by political party than by gender. That said, the researchers also found that the inverse is true, especially among young people: Gender is shaping attitudes around issues such as sexual harassment, and in turn is helping shape partisan identities.

"One of the most striking findings was the one about the extent to which Republicans or Democrats would be willing to vote for someone who was accused of multiple instances of sexual harassment," Dan Cox, the research director of PRRI, told Salon. 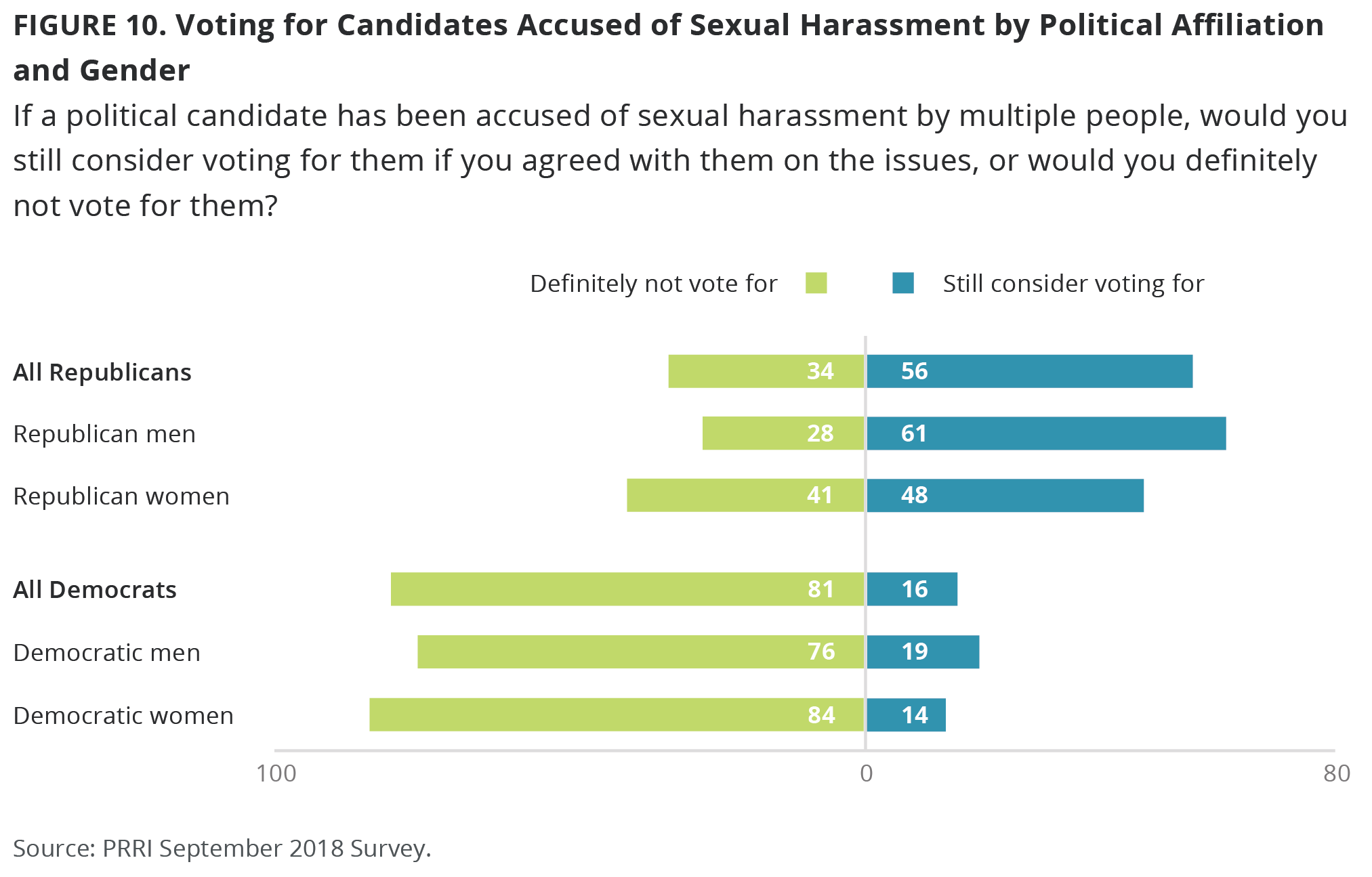 What is also interesting about this finding is that a number of Republicans, at least, are being dishonest about this. Nine out of ten self-identified Republicans did vote for a man accused by multiple women of sexual harassment — Donald Trump — even though 34 percent now say they would never do that. But that election, as Cox points out, was "before the #MeToo movement". The shifting national discourse may make it less tenable for Republicans to say they would vote for a serial harasser, even if they privately continue to do so.

As Cox explained, the picture is more complicated than simply asserting that views on gender equality flow from partisan identity. Instead, he argued, for some voters gender issues increasingly impact how they vote and what party they identify with.

“There already have been more women in the Democratic Party than in the Republican Party, but we may see that gap widening," he said. "We’re looking at a historic gender gap in the 2018 election, and a lot of that was before [Brett] Kavanaugh."

PRRI research continues to show, in Cox's words, that there's a "growing youth gender gap, where we’re seeing young men and young women become increasingly polarized around a lot of these gender issues." In other words, and the number of young women who believe that sexism is widespread is growing while the number of young men who agree is shrinking. Young men are even more likely than older men to express fear of being falsely accused of sexual harassment.

Because of this, Cox said, young women in particular are flocking to the Democratic Party and reshaping it in their image, pushing the Democrats to the left on gender issues and pushing for more female candidates and more women in office. Unsurprisingly, PRRI data shows that Democrats are twice as likely as Republicans to believe Roe v. Wade was a good decision, nearly three times as likely to say that contraception access is an important issue, and far more likely to rate both stopping sexual harassment and closing the gender wage gap as priority concerns.

All this data resists a simplistic view of gender, party and politics. Party predicts attitudes about gender, but then again, people are sorting themselves into parties in large part based on their views regarding gender equality. While gender does not entirely predict levels of sexism, it's true that women are somewhat less sexist than men, and subsequently are more likely to identify as Democrats.

What is perhaps most interesting, however, is that gender issues have become more salient to voters overall. People are thinking about sexual harassment, workplace equality and reproductive rights more that ever -- and those issues are playing a bigger role in how they think about politics. The partisan battle over women's equality has grown more serious since the Trump vs. Clinton showdown of the 2016 election, but it may only be the beginning of an all-out political war.