Writing of drunken blackouts, Judge admits, “I could have done anything and not know it” 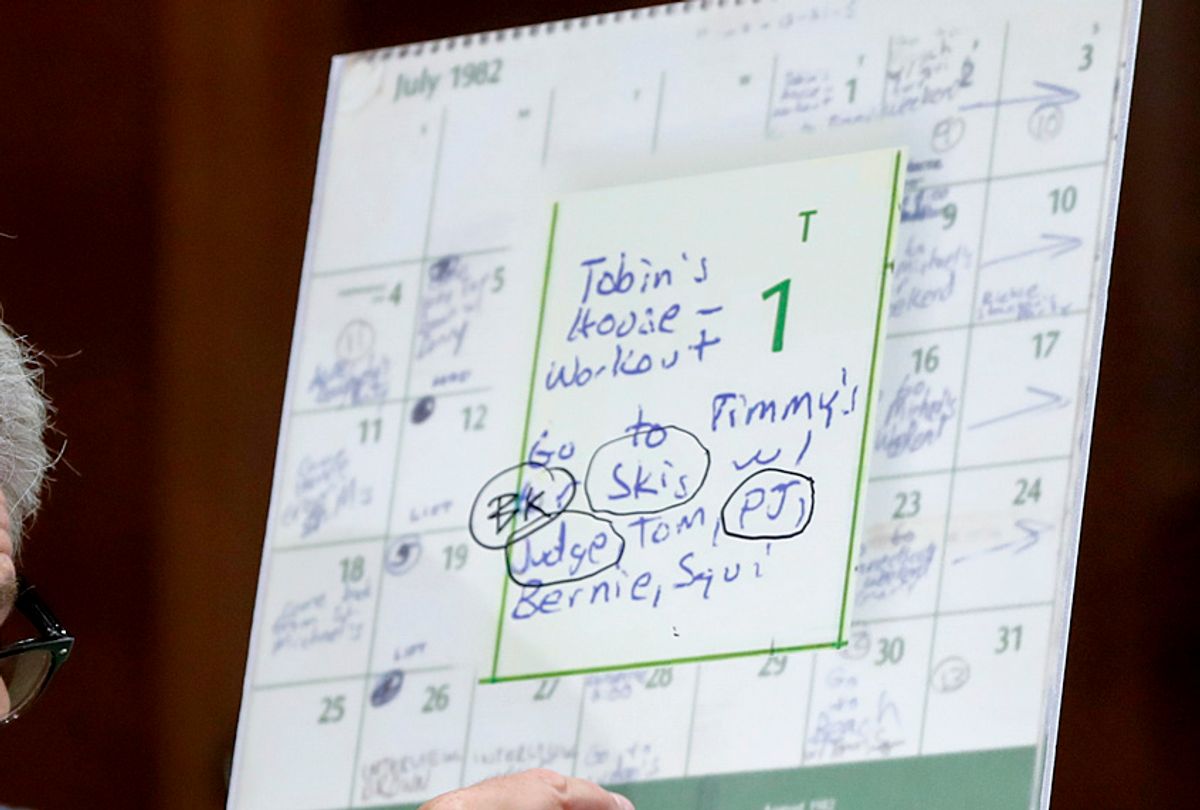 The names of friends of Brett Kavanaugh are circled on a depiction of his high school calendar. (AP/Pablo Martinez Monsivais)
--

Blackouts. Beach week. Bacchanalia. A pivotal job as a bag boy at a grocery store. When Mark Judge wrote "Wasted: Tales of a GenX Drunk" in 1997, he could hardly have imagined it would be scrutinized, two decades later, in consideration of his football- and drinking buddy Brett Kavanaugh’s Supreme Court confirmation.

Judge’s addiction memoir provides a vivid backdrop of fast times at Georgetown Prep — offering outsiders a lens through which to interpret his and Kavanaugh’s alleged interaction with Christine Blasey Ford, who has accused Kavanaugh of a teenage sexual assault, with Judge an alleged witness. (Kavanaugh has categorically denied Ford’s charges. Judge has said, “I have no memory of this alleged incident.”)

"Wasted" also chronicles Judge’s frequent, self-described alcoholic blackouts — and his fears of what he was unable to remember. Judge writes of being “terrified of what I could have done” during one post-high school bender. The book colors Judge’s reliability as an alibi for Kavanaugh. Judge has reportedly been cooperating with the FBI in its renewed background investigation of the nominee.

(Judge has also written to the Senate Judiciary committee that he “categorically” denies the allegations of Julie Swetnick, who has accused Judge and Kavanaugh of sexually assaulting incapacitated women: “I have never engaged in gang rape of any woman, including Ms. Swetnick,” Judge wrote. “Even while suffering my addiction, I would remember actions so outlandish.” Kavanaugh has also forcefully denied Swetnick’s allegations.)

What follow are excerpts from "Wasted" that illuminate the student culture at Georgetown Prep during that era — and fill in some of the gaps in the timeline of the critical summer of 1982.

Judge’s book uses pseudonyms for people, and even for the high school that Judge and Kavanaugh attended, which becomes “Loyola Prep.” An editor’s note describes Judge’s project: “This book is based on actual experiences. In some cases, the names and details have been changed to protect the privacy of the people involved.”

Early in the book, Judge introduces readers to the culture of alcohol he witnessed at Georgetown Prep, writing: “It soon became obvious that drinking was one of the major forms of recreation at Prep. On Monday morning the upperclassmen would return from the weekend with stories about keg parties, girls, and hours spent in bars in Georgetown. . . . At Prep, seniors would often go directly from class to a bar. They would even drink with alumni at football games.” (Despite its name, the school is located in North Bethesda, Maryland, roughly 10 miles north of the D.C. neighborhood of Georgetown.)

“A week-long bacchanalia of drinking and sex”

Judge writes that his struggle with alcoholism began the year before the encounter alleged by Ford. “My immersion into alcohol began at the end of my sophomore year, during beach week,” Judge writes. “Every year when we let out for the summer . . . all the kids from Catholic school would pilgrimage down to the Eastern Shore for a week-long bacchanalia of drinking and sex, or at least attempts at sex.”

Brett Kavanaugh does not make a direct appearance in "Wasted," but a similarly named classmate appears, in dialogue Judge recalls with a girl he liked named Mary:

“Do you know Bart O’Kavanaugh?”

“I heard he puked in someone’s car the other night.”

“Yeah. He passed out on his way back from a party.”

Judge writes of his decision to try out for the football team before his senior year, in part to win favor with his distant father. Judge also notes that the team liked to rage: “Football players always organized the best parties. It would put me right in the center of action.”

Perhaps the most critical passage in "Wasted," in the wake of Ford’s testimony, is Judge’s description of getting a job to raise money for football camp at the end of the summer of 1982. In her Senate testimony, Ford described running into Judge after the alleged attack at a Safeway where Judge was working. “If we could find out when he worked there, then I could provide a more detailed timeline as to when the attack occurred,” Ford testified. Ford recalls she ran into Judge at the supermarket about “six-to-eight weeks” after the alleged sexual assault.

According to Kavanaugh’s calendar, released as part of his testimony, Georgetown Prep’s football camp started on August 22nd, 1982 — or about seven weeks after a July 1st entry Kavanaugh recorded for getting together for “skis” (presumably “brewskis”) with Judge and other friends, including a boy named P.J., whom Ford said attended the gathering where she was assaulted. “This may — may — be powerful corroborating evidence that the assault happened, that it happened that day, and that it happened in that place,” said Sen. Sheldon Whitehouse (D.-R.I.) in Senate chambers last week.

At this point in his life, Judge describes himself as a problem drunk: “Alcoholics also get into all kinds of trouble because of their drinking,” he writes, “When they supersede their own tolerance, they suffer catastrophic hangovers. These can make getting through the day an Olympic event. This was never more evident to me than when, to raise money for football camp, I spent a few weeks working as a bag boy at the local supermarket. . . . It was a nightmare. Invariably I would be hungover or still drunk when I got to work at seven in the morning, and I spent most of the first hour just trying to hold myself together. I had stopped eating breakfast a year earlier, so I didn’t have to worry about trying to keep food down after a bender, but sometimes I was so toxic from the alcohol that I would have the dry heaves. Luckily the bathroom was a private room in the back of the store, and I often managed to recuperate there unnoticed.”

On the weekend before football camp, Judge recalls a getting blackout drunk after taking shots at a bar with friends. Judge writes of waking up, mystified, at a Four Seasons hotel: “The next thing I knew, I was lying on a bathroom floor. I was curled up in the fetal position with saliva running out of the side of my mouth. I sat up and tried to open my eyes. Then I struggled to my feet and looked in the mirror. My hair was sticking straight up, and my face was chalk white and swollen. It looked like a bunched-up pillow. My T-shirt was soaked with sweat. I took a long drink of water, then splashed some onto my face. I slowly walked out to the hall. I was in a hotel or apartment building. I took the elevator downstairs and found myself in a hotel lobby.”

Judge’s memoir provides the backstory for the “100 Kegs of Bust” notation that appears in his and Kavanaugh’s senior yearbook entries. In Judge’s telling, his Georgetown Prep cohort was furious at their headmaster for inaugurating a Sunday service project for the school’s seniors to combat “senioritis.” Payback, Judge writes, would come through extravagant beer consumption:

“We have to do something,” I said. “They can’t get away with this our senior year.”

“What are we going to do?” Shane said, laughing. “Drink a hundred kegs and brag about it?”

No one laughed. For a second, no one even spoke.

“Wait a minute,” Shane said. “You can’t actually be thinking of”

Judge writes that as the boys’ senior year progressed, the keg challenge was heartily embraced: “It was Sunday morning, and the night before we had polished off keg number sixty-two. For the past four months, we had thrown parties every weekend as well as after school, and had even snuck a keg into the parking lot during a basketball game.” For Judge, his drinking had gone off the rails: “I had reached the point where once I had the first beer, I found it impossible to stop until I was completely annihilated. . . . Once I felt the first lilting rise of a buzz, I had to keep drinking until I could hardly walk. Many of the other guys were the same way; while some got sick after just a few beers, the hard-core drinkers could go all night, and often did.”

“I could have murdered somebody”

Judge writes that his blackout drinking continued — and worsened — in the years after graduating from Georgetown Prep. He recalls one night at his favorite bar: “We bought each other several rounds of drinks, and when I looked at the clock it was after midnight. Then, in what seemed like an instant, it was suddenly the next morning. . . . I had blacked out. I awoke lying on my back. I looked around quickly and determined that I was in my room; then I examined myself. I was fully clothed. I started to panic, terrified of what I could have done during the blackout. I could have done anything and not know it. I could have murdered somebody.”

“Please tell me I didn’t hurt her”

In one of the final blackouts he recounts, Judge describes his behavior at a rehearsal dinner for one of his high school friend’s weddings. He recalls the dialogue, beginning with a friend:

“You put on quite a show. After doing all those shots, you tried to get up on the table and started taking your clothes off, but Shane and I pulled you down. You also tried to make it with one of the bridesmaids.”

“Jesus,” I muttered. “I tried to make out with a bridesmaid? Please tell me I didn’t hurt her.”

“No, in the shape you were in, I don’t think you could have if you had tried, and we would have stopped you. You made a serious lunge at her, then started kissing her toes. We finally just pulled you off and out of the bar.”