Ripley burns it all down: On "Aliens" and the dangers of dismissing women's rage

Women's warnings have always been ignored, our trauma dismissed. Ellen Ripley proves men do so to their own peril 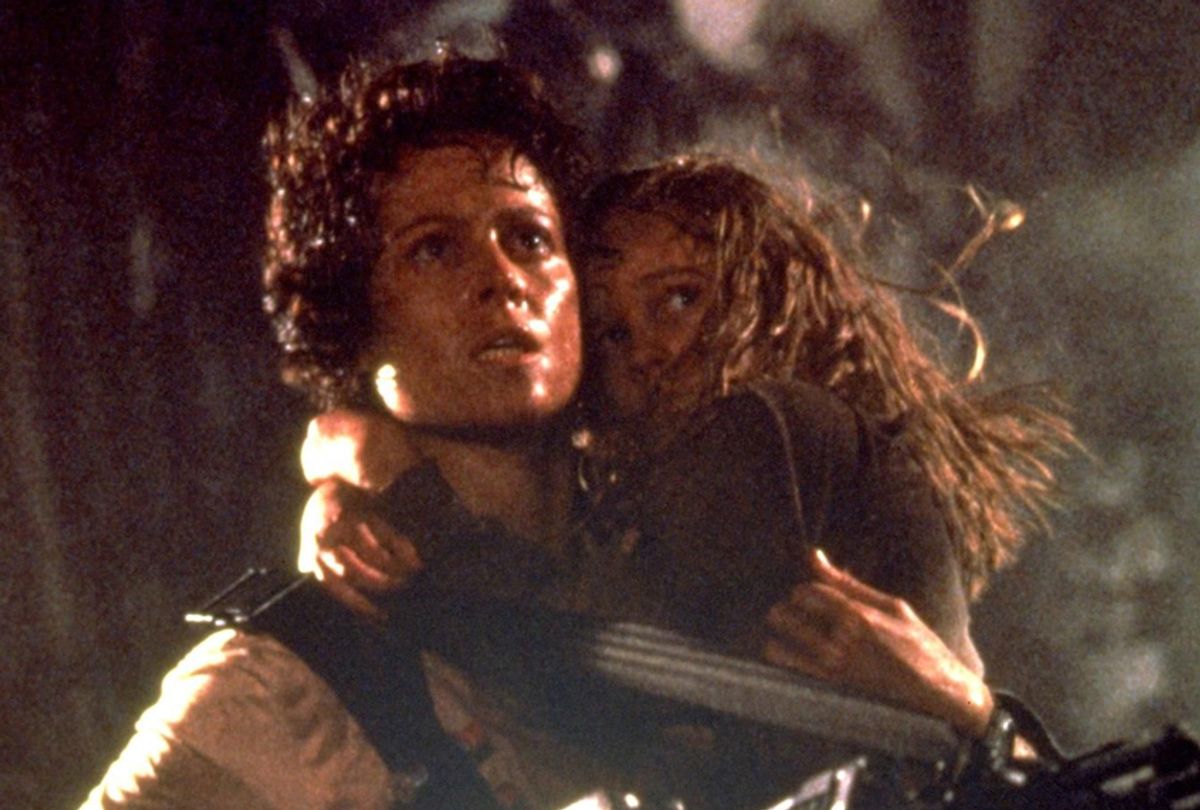 Every time I watch the 1986 action-horror classic “Aliens,” a film I’ve watched so many times I’ve lost count, it takes on new meaning. I’ve long argued its merits as a metaphor for a woman enduring sexism in the workplace, due to the many trials Sigourney Weaver’s Ellen Ripley faces over the three films.

In 1979’s “Alien,” Ripley’s an officer on the Nostromo who survives the infiltration of an alien that turns out to be quite the killing machine — it wipes out her entire crew — only by getting into an escape pod, setting the cargo ship she’s co-commanded to self-destruct and eventually blowing the intruder out of an airlock.

In “Aliens” a salvage crew discovers her pod floating in deep space, where she’s been locked in hyper-sleep for 57 years. Does the company she’s contracted with give her a hero’s welcome? No. She’s demoted, and her account of a xenomorph — a creature that gestates inside a living human host, has an extremely hard exoskeleton, a razor-like whip for a tail and concentrated acid for blood — is dismissed.

Until, that is, those things overrun a colony. Then they believe her — but only because they need her as a consultant. They send her back out into space to solve their problem, this time with a band of colonial Marines. The field project does not go well, but Ripley survives.

Does she get compensated by the company? Of course not! Nope, by the time her employers find her again, she’s survived another alien killing spree, this time on a prison planet (in 1992’s “Alien 3”) and, spoiler alert, she’s got another alien on board — as in, gestating inside her.  (The violation metaphor represented by the alien, and H.R. Giger’s phallic xenomorph design, is worth its own discussion.)

And because of this, because she has nearly worked herself to death but finally has “a project” that’s worth something to the company, likely for its potential as a bioweapon, its representatives offer to save her. She declines and exits the workforce, by way of jumping into a flaming hot furnace.

“Aliens,” though, is the best of the series and remains one of my favorite films of all time. However, it didn’t reach that status for me until I joined the workforce. Only when I clanged up against the frustrations of the corporate world did the primal force driving Ripley make sense. And really, it all comes down to one scene.

But first, some context: I was the most junior member and one of three women on a team of arts writers and critics, eager to rack up bylines and work hard and please a manager who would never be happy with me.

My boss — also a woman, might I add — made sport of saying negative things about me in front of the rest of the staff during our stand-ups. One of her favorite past times was to performatively read mail disparaging something I’d wrote, laughing and occasionally offering, “This is really good!”

I developed migraines. One of them temporarily blinded me in one eye while I was typing. Blowing a deadline was not an option, so I said nothing and finished my story. After it was filed a co-worker who had noticed my silent distress, quietly reached in his drawer and handed me a low-dose prescription sedative.

On days like that, the worst days, I’d head home and shove my battered VHS tape of “Aliens” into my VCR, which was always left cued up to the climactic scene where Ripley flies back to the collapsing heart of the colony on a moon called LV-426, straight to the alien hive to save Rebecca “Newt” Jorden, the little girl who is the terraformed outpost’s last survivor.

Time is short on two fronts: First, the colony’s nuclear-powered energy source is about to explode, blowing the entire moon to dust.  Second, at any time an alien “facehugger,” the smaller, arachnid-like versions of the beast, could attach itself to Newt, forcing its embryo down her throat and dooming her.

And by this point in the movie Ripley is the last human standing. Aliens have wiped out the Marines she was sent in with save for one, Hicks, who is too injured to move. The remaining weapons are low on ammo and Ripley has only recently fired one of their automatic pulse rifles for the first time.

Nevertheless, she duct tapes a flamethrower to one of those rifles, straps on a bandolier of grenades and marches into an elevator headed straight to hell. As the lift descends, Ripley shoulders the weight of her weapons and stands. Then, for a brief moment, Ripley closes her eyes. When she opens them, her facial expression goes cold.  The doors open. Time to go to work.

Weaver’s performance in this movie earned her an Academy Award nomination, and those moments prove how deserving that nod is — those silent, subtle emotional shifts. As she ventures deeper into the hive, she has no lines, only the determination and anxiety on her face. When she retrieves Newt and stumbles into the heart of the alien lair, a place carpeted with eggs and ruled over by a gigantic, hissing alien queen, her jaw slackens, and her eyes widen with fear.

That moment is a conversation of expression, in fact: the queen breathes sharply, but it might as well be a roar. Ripley answers by showing she has a flamethrower, then points it at the queen’s eggs. The two females achieve détente, or the appearance of it. For, as Ripley and Newt back away, one of those eggs open.

Then Weaver does something with her face all women recognize. She tilts it to one side for a moment, and relaxes into a look that wordlessly says, “Really? We’re going to do this? You’re making me do this.” And it’s flame on, from the weapon and from Ripley.

She’s all gritted teeth and scowling, unloading bullets and fire and wrath. Weaver growls and yawps as she pumps the weapon and launches grenades into the place. And as Ripley and Newt run away from the discombobulated alien ruler, she throws all of her grenades into the flames behind her. She burns it all down.

In the years since “Aliens” first came out people have debated Ripley’s merits as a feminist action hero, for reasons beyond the fact that she was created by men — screenwriters Dan O'Bannon and Ronald Shusett brought the character into existence, but her mettle and fury is pure James Cameron, who wrote the script for “Aliens.”

Beyond dispute is the film's timeless worth as a cathartic work, especially in terms of its accidental commentary on the sexism of the corporate structure.

However, one aspect that drew me back to it in the wake of all that’s happened since the Senate Judiciary Committee hearing on Sept. 27 is the fact that even 32 years ago, the men who wrote Ripley acknowledge the peril we all face by not listening to women.

In “Alien,” the Nostromo’s android Ash defies orders from Ripley that would have kept the lethal xenomorph from coming aboard in the first place. In “Aliens,” Ripley’s testimony before the company board — a three-and-a-half hour ordeal — is dismissed because she destroyed a star freighter, a very expensive piece of machinery, the head of the board says. “42 million in adjusted dollars,” another man in the room offers. “That’s minus payload.”

Before that she meets Carter Burke, the weaselly company minion played by Paul Reiser who, although he appears to be the same age as Ripley (chronologically, she would be an octogenarian), casually refers to her as kiddo.

During the mission the inexperienced lieutenant in charge ignores her warnings to pull back the team, freezing up when the aliens overrun them and slaughter all but three. It’s Ripley who has to drive the tank in to save them, and Ripley who has to construct the plan to keep them safe once they find shelter.

Even then, after Burke attempts to enable a facehugger to “impregnate” Ripley and Newt to get an alien back to his employers and past quarantine, Ripley has to state her side to the remaining Marines who don’t quite buy the basis of her accusation. That is, until she informs them that in order for Burke’s plan to work, he’d have to kill any witnesses — as in, the grunts.

His reply to this? “This is so nuts. I mean, listen. . . listen to what you’re saying! It’s paranoid delusion. It’s really sad! It’s pathetic.” It’s all so familiar. All that’s missing is some tears.

These long weeks and months have inspired essays about the worth of a woman’s pain versus a man’s, the weight of her word versus his. The subject has filled books, inspiring several on anger and, I suspect, many more to come.

Ellen Ripley has embodied that frustration, agony and indignation for more than three decades. Ellen Ripley is cinema's patron saint of pissed off women.

Most fans, men and women, may not take that into account when they laud her unyielding spirit and nerve. Purely by surviving one of the universe’s fiercest predatory species not once, not twice, but many times, Ripley has justified her place in the Pop Culture Badass Hall of Fame.

But some of us love Ripley because we feel a version of what Weaver poured into her, we’ve always felt it.  And there are times that place us under siege, like now, when we feel it in our skin. When we witness the timeless, cold honesty these films show in action, in our own world — that as horrifying as these insect-like aliens are, “you don’t see them f**king each other over for a goddamn percentage.”

Ripley always manages to survive even if, ultimately, she’s never able to overcome. There’s a message there too.

The larger one is that Ripley’s spirit is always available to shore us up, roaring loudly that no, we're not wrong, that our rage is a perfectly reasonable reaction, even when she doesn’t say a word. Just skip to that perfect spot – the one hour, 49 minute mark of “Aliens.” By then the movie is almost over. But the fight in Ripley will never be done.