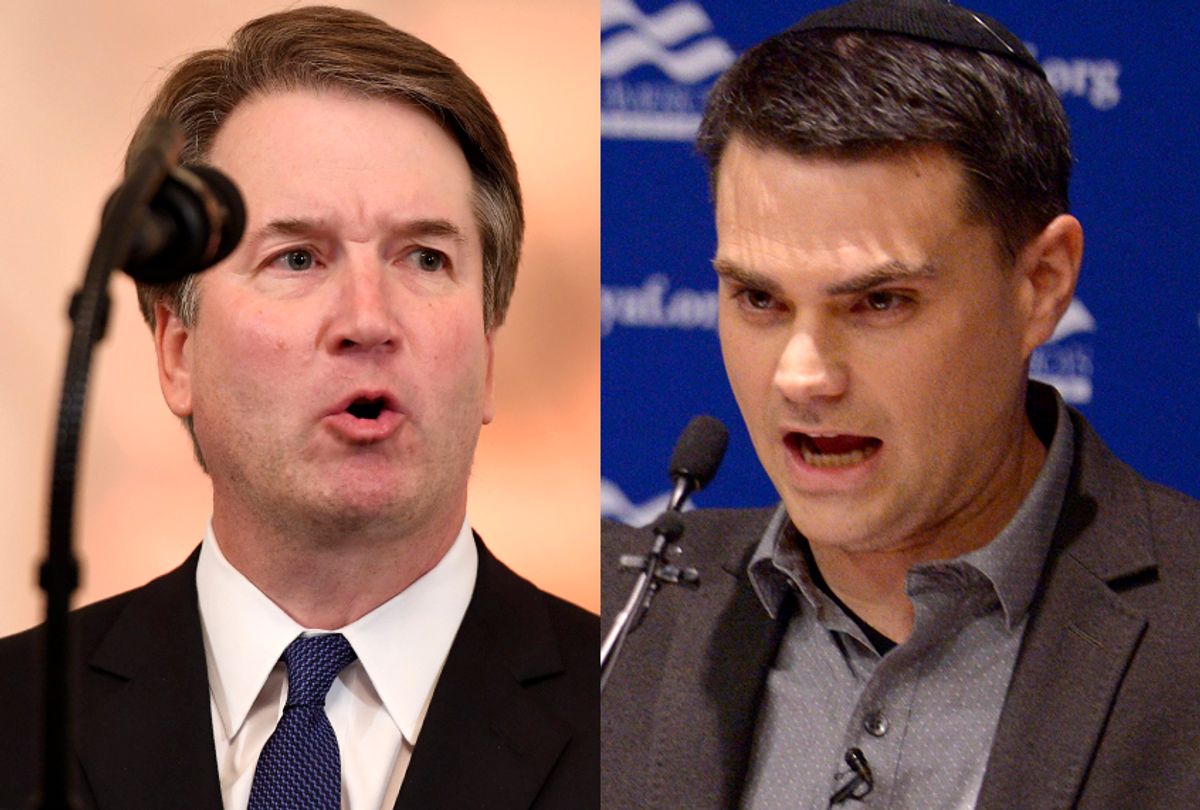 The political fight over whether to seat Brett Kavanaugh on the Supreme Court -- a man who has been accused of sexual assault and was nominated by a man who has bragged about sexual assault -- seems, to most people anyway, to be a fight primarily about gender. But if you flip on Fox News these days, you would think this battle is largely about race, and that white men are being subject to false rape allegations to perpetuate some kind of anti-white oppression — an inverse of the way false rape accusations were used as pretext for lynching black men in the late 19th and early 20th centuries.

(In fact, Rich Lowry of the National Review was depraved enough to make that implicit argument explicit.)

Tucker Carlson, edging his show ever toward overt white nationalist rhetoric, argued on Monday night that criticisms of Kavanaugh and the power systems that hold him up are a form of "genocide" against white people.

"You might wonder what in the world this story, the Kavanaugh story, has to do with race," Carlson said, before arguing that the real agenda here was about "punishing everyone who looks like Brett Kavanaugh," as opposed, perhaps, to holding abusive men accountable for their behavior.

Variations of the anti-white racism charge have echoed through Fox News coverage in recent days. Martha MacCallum wondered if Kavanaugh should say he's "not guilty just because I am a white guy," which completely overlooks that the actual argument against him is based on corroborating evidence and the lies he told under oath. Ben Shapiro later announced that "white men are presumed guilty because they are white men," which ignores not just all the evidence against Kavanaugh and his false statements to the Senate, but also the fact that Kavanaugh was given a Senate hearing to defend himself and allowed to speak after his accuser.

All of these folks were likely following Ann Coulter's lead. Even before the Senate hearing in which Christine Blasey Ford testified against Kavanaugh, Coulter appeared on Carlson's show to deliver a rant about how the term "white privilege" meant that "any white male can be accused with an evidence-free accusation like this," and appeared to equate being accused of something with being found guilty.

"I thought it was weird that she explicitly threw the race piece in there," Angelo Carusone of Media Matters told Salon. "Why not just say this can happen to any man or any person?" he wondered. Since then, Carusone said, he has concluded that Fox News is deliberately racializing this issue because the network sees "as an opportunity to rally white people."

To be clear, there's no doubt that race — as well as class, education, wealth and family connections — has always been a part of this story. Many commentators have written and discussed the way that Kavanaugh's life growing up surrounded by immense privilege shielded him from all sorts of consequences for misbehavior. But that makes the race angle Fox is peddling even harder to swallow, since the kind of privilege that Kavanaugh enjoyed is rare even among white men, only a handful of whom are positioned to attend fancy prep schools and gain legacy admission to an Ivy League college.

But Carlson in particular is embracing the opportunity to use Kavanaugh's skin color to convince white middle-class and working-class Americans to align themselves with the moneyed elite against people of color whose economic interests they share. Carlson was even shameless enough to characterize a crowd that booed Sen. Lindsey Graham for his defense of Donald Trump as waging a revolution "against the working class." Is the working class defined by the skin color or by socioeconomic status? (This should hardly need saying, but people of color are more likely to be working-class than white people.)

This strategy of channeling the resentment many men feel at women who challenge male privilege and abuses, and using it to lure those men toward racism or overt white nationalism views is something Fox News learned from the alt-right's online organizing. As groups like the Anti-Defamation League have chronicled, white nationalists have effectively used online forums where men gather to complain about feminism as hunting grounds for recruitment.

"One of the most powerful inspirations to violent misogyny across all of these movements – alt right, MRA, incel – is the baseless charge that white men are victims who are falling prey to feminism, changing social norms, progressive thought and politics," the Anti-Defamation League report explains.

Such men might be drawn to forums because they want to bash anti-rape activists or complain about sexual harassment policies at work. But once they get there, they're ready for the message that white women are in cahoots with people of color to seize control and subject white men to oppression.

Carlson and other Fox News personalities are playing the same game: They're using anti-feminist rhetoric to open the door to the kind of racist rhetoric being peddled by the likes of David Duke and the KKK. White people are being oppressed by many sinister forces, the argument holds, and racial diversity is a mask for the supposed genocide of white people.

Carusone perceives an ideological agenda on here — Trump is a semi-overt racist (although he denies that specific label) and Fox News has an interest in keeping his views in the political mainstream — but also a financial one.

Fox News needs "that younger audience," Carusone said, because the network's audience, with an average age of 68, is about eight years older than the typical cable-news viewer. Fox News is having some problems with advertising, and has openly yearned to attract more eyeballs among the 18-to-45 crowd that advertisers crave. Fox Nation, an online service that still hasn't launched, is clearly one effort to grab that crowd. But another is to shifting the rhetoric on Fox News itself to more closely mirror the racist, paranoid nonsense being eagerly gobbled up by the young men who flood places like 4chan, Reddit and 8chan and decorate their social media avatars with the Pepe the Frog avatar.

Fox News, Carusone argued, increasingly sees "the alt-right Periscope channels and YouTube channels that really speak to the audience of young men" as their principal competition. That crowd isn't interested "the 30 or 40 minutes of standard right-wing stuff" normally seen on Fox News, he continued, but wants "vicious attacks and conspiracy theories" of the kind they often encounter online. Carusone notes that, along with the "white genocide" rhetoric, Fox News has also shilled for a conspiracy theory that has lately bubbled up in the 8chan and Reddit swamp: the proposition that Christine Blasey Ford has had false memories implanted.

The forces of online organizing behind white nationalism and other fringe, fascist-flavored ideologies have already had a significant impact on younger people. PRRI research indicates that while most young Americans are politically to the left of their elders, young white men, no doubt influenced by far-right online culture, increasingly reject the existence of actual racism and sexism and believe instead that white men are the true victims of oppression. Carusone expressed concern that seeing such views "featured front and center at one of the most prominent news channels" will offer the apparent imprimatur of mainstream acceptability, and encourage the existing audience to become even more overtly racist than it is already.

The constant drumbeat of news items about President Trump's racist remarks or Tucker Carlson's latest flirtation with white nationalism can be numbing, but the grim reality is that this situation is getting worse all the time. Fox News has seized on the increased coverage stemming from the Kavanaugh showdown to push claims that used to be entirely disreputable even on the right. That suggests the network is determined to tie the Republican Party's to Trumpism and define racial grievance as its core ideology.