So it's true: Republicans really do hate women

It's not just Trump. With the vote to move forward on Kavanaugh, the misogyny at the heart of the GOP is revealed 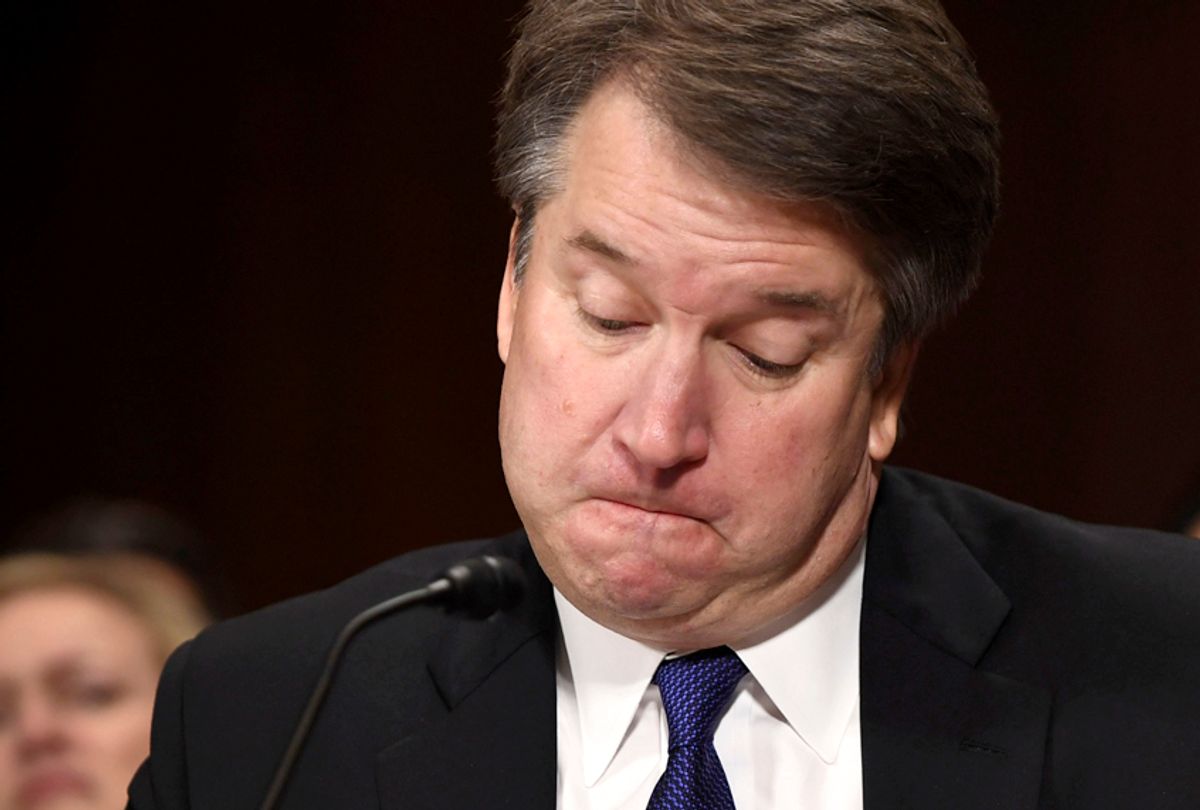 They really do hate women.

It's long been frowned upon to acknowledge this fundamental truth: Misogyny is at the heart of right-wing politics. Pointing out that hatred of women and a desire to keep them under the boot is an animating force of Republican politics is sure to draw pained expressions from many liberal men, certain that the feminists are being hysterical again. Surely feminists don't think it's quite as simple as that, right? Surely we understand that anti-abortion views are about a sincere belief that life begins at conception and anyway, Republicans aren't serious when they say they're going to ban abortion. That's just something they say to rile up the rubes, to trick them into voting for the real agenda, which is about economics and taxes. Certainly you women can't think you are important enough that oppressing you is a major priority for Republicans, right?

We're not hearing that argument much these days, though the price that had to be paid for the wake-up call was steep indeed: The election of a gloating misogynist who brags about his lengthy career sexual assault. Now the Senate, with Friday's cloture vote to move forward with the nomination of Brett Kavanaugh, is one step from seating a piggish frat boy who has been credibly accused of abusive sexual conduct by multiple women to the Supreme Court. Once there, he will almost certainly be the fifth vote to gut abortion rights and to start chipping away at LGBT rights and contraception access.

In his famous 2004 book, "What's the Matter With Kansas," Thomas Frank laid down the argument that became almost a doctrine in some quarters of the left, which was that gender politics and the culture war and gender politic were just distractions thrown up by Republicans to bait the masses into voting against their economic self-interest. Frank wrote that culture war politics "may count when conservatives appear on the stump," but "once conservatives are in office the only old-fashioned situation they care to revive is an economic regimen of low wages and lax regulations."

"Abortion is never halted. Affirmative action is never abolished," he intoned, setting up a decade-plus of liberal men, right through the 2016 election, insinuating that feminist priorities like electing more women to office were a distraction from real issues. That pressure campaign was largely successful, leaving many women too ashamed to be frumpy feminists who were mysteriously undermining the progressive cause to get excited about the possibility of electing a feminist like Hillary Clinton.

Seems like feminists aren't being shamed into silence so easily these days. The videos populating social media from the protests at the Hart Senate Building are a cacophony of mostly female voices raised high, screaming disapproval of the Kavanaugh nomination and no longer intimidated by accusations that they are shrill, hysterical or, heaven help us, not sexy. And Republican reactions strongly suggest their misogyny is more than an act put on to bamboozle the yokels.

"I want to make it clear to these people who are chasing my members around the hall here or harassing them at the airports or going to their homes, we’re not going to be intimidated by these people," Senate Majority Leader Mitch McConnell said of the protesters.

“When you grow up, I’ll be glad to [speak to you],” Sen. Orrin Hatch snapped at a group of protesters, equating grown women with children who need a scolding.

“You needed to go to the cops,” Sen. Lindsey Graham told another protester when she confronted him about her own history of rape, implying that he --  with no information about her situation -- understood her options better than she did.

Sen. Ben Sasse dismissed the protests by women against Kavanaugh as "hysteria" three times during the original confirmation hearing, when the focus was primarily on reproductive rights and before sexual assault became an issue.

Donald Trump, of course, is screeching on Twitter about how the protesters are "paid" and funded by "Soros," because it is impossible for him imagine that women might actually have minds of their own.

Let's be clear that the women clogging up the halls of Congress are not paid or idiots or children or harpies. These protests are being led by women who are speaking out about their own experiences with sexual abuse. This dismissal of the intelligence or honesty of sexual assault survivors is sadly not surprising. That is how women's stories of sexual abuse have been discredited since forever. That's how Christine Blasey Ford's moving testimony against Kavanaugh is being discredited. This has nothing to do with what's true or most believable or most backed by evidence. It's about asserting that women's voices have no value, no matter what they're saying or how true it is.

Feminists have had fun with our jokes about "misandry" or "well-behaved women seldom make history" bumper stickers. But truth be told, most of us have still lived in the abiding hope that being good girls who ask nicely will get us closer to equality. Certainly that was the main theme of Clinton's campaign, which highlighted her hard work, her qualifications and her demeanor of grandmotherly kindness. Her supporters largely followed that lead, keeping their gripes about sexism to private Facebook groups and listservs and putting on a cheerful face to the world.

For that, Clinton got called a "nasty woman" and lost anyway.

Christine Blasey Ford's testimony was more of the same. She had a soft, girlish voice and a winsome demeanor, completely without guile. She was vulnerable, not angry. She came across as someone who really believed that if the Senate knew the truth, it would do the right thing.

Now she's getting smeared as a liar or a crazy woman and lost anyway.

In the instant classic work of feminist philosophy, "Down Girl: The Logic of Misogyny," Kate Manne disputes the naive conception of misogyny as some sort of knee-jerk hatred of women. Instead, she argues that it's about the policing of women. A misogynist is perfectly happy with women if they behave the way he wants them to, by being servile and pleasing. But when women start to resist their assigned role and start insisting on respect, justice and equality, the fangs will come out.

We saw the truth of Manne's theory play out throughout this Kavanaugh hearing. Oh, we heard so much about how Kavanaugh loved the silent, smiling women and girls who were brought out to flank him at every public appearance. A great deal of attention was paid to letting us know exactly how much Kavanaugh adores the women who populate his world and take orders from him, such as his law clerks and the girls on the basketball team he coaches.

But when women started saying no to him and started speaking up, he got red-faced, screaming and self-pitying. Republicans in Congress were so deeply moved by his performance because they, too, cannot believe these women who think they have a right to speak out. That was why it had to be Brett Kavanaugh, rather than substituting in some other right-wing judge with equivalent qualifications and fewer allegations of drunken sexual assault.  Because Republican misogyny is not an act, and the party and its followers eagerly seized this opportunity to put women in their place.