The deluge of horror TV grows larger in 2018, as a number of promising shows are debuted at NY Comic Con 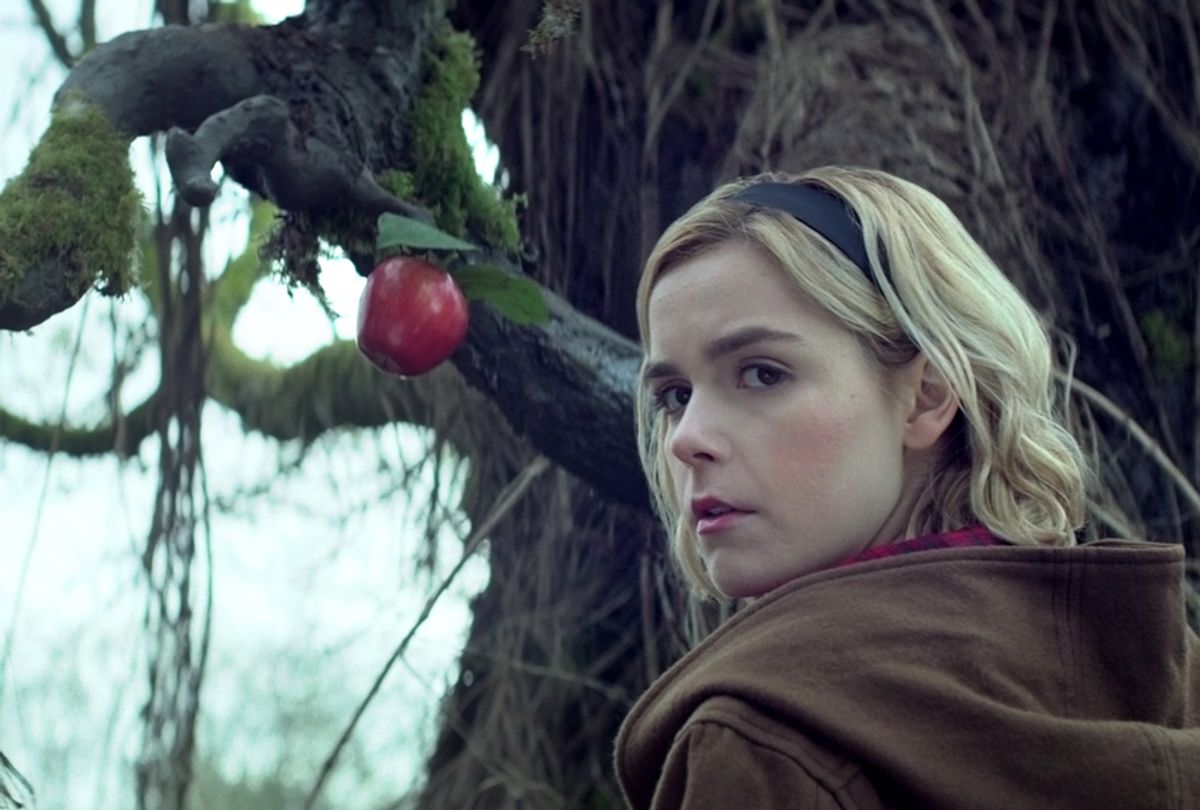 The 2018 New York Comic Con, as in years past, just keeps getting bigger, louder, and more crowded with various studios, publishers, and video game companies competing for attention from the crowd of costumed attendees, who are ever eager to geek out and sip some of Johnnie Walker's new "Game of Thrones"-themed scotch. But even in the cacophony, one major trend emerged, heightened by the conference's proximity to Halloween: horror TV shows.

It was hard to keep up with the number of horror-themed series that were being heavily promoted this year. There's "Good Omens," an adaptation of the Satan-and-apocalypse novel by Neil Gaiman and Terry Prachett that stars David Tennant and Michael Sheen; "Nightflyers," a SyFy adaptation of a 1980 space horror novella by George R.R. Martin; "The Haunting of Hill House," a Netflix adaptation of the famous Shirley Jackson novella that was previously adapted into a classic 1963 film by Robert Wise and an infamous 1999 CGI trainwreck. And, in what may the biggest risk with the most potential, "The Chilling Adventures of Sabrina," which takes the formerly light adventures of a teenage witch and remakes the story as authentic horror.

Horror fans are no longer stuck in the world of movies, but have a cornucopia of TV series to watch for their gruesome kicks. These new properties add to the growing pile of popular horror series that have cropped up in the past few years, including the behemoth "The Walking Dead" and the uneven but innovative anthology "American Horror Story," along with departed shows like HBO's vampire sex comedy "True Blood" and the critically beloved "Hannibal." Hulu's "Castle Rock" and Netflix's "Stranger Things" feed both the horror and nostalgia appetite, deliberately invoking classic horror movies from the Stephen King-heavy era of the '80s.

There's good reason horror used to be more rooted in the world of movies than TV. Outside of occasional cable shows like HBO's "Tales from the Crypt," the sex, violence and dark themes that define the genre didn't fit within the family-friendly parameters most TV networks required. But plotting was also an issue. Horror, which is about violence and disruption to the normal social order, was tougher to work into the more intricate plots and on-going tensions necessary for TV shows running over multiple seasons.

Clearly, the explosion of streaming services that can tailor their fare to adult audiences contributes to this recent horror growth. But there's also been innovation in storytelling that allows for more long-term storytelling. As "Sabrina" showrunner Roberto Aguirre-Sacasa — whose adaptation of Archie Comics gave us the CW's "Riverdale," a stylish fable about the horrors of small town America — explained at a NY Comic Con press conference, the strategy his writers took was to abandon any attempt to write "pure horror," but instead to write family and social drama that was then wrung through a "horror filter."

To be certain, horror has always had a place on TV. There’s “Twilight Zone,” of course, which has been badly reimagined for the technophobes of the 21st century in “Black Mirror.” There’s hybrids like “Dark Shadows,” a horror/soap opera from the '60s. "Charmed," a show about witches which leaned more in the fantasy direction but had some horror elements, ran for eight seasons, starting in 1998. "Supernatural," a CW show about demon-hunting brothers, debuted in 2005 and is still going strong 14 seasons later. And most famously — and successfully from an artistic perspective — is “Buffy the Vampire Slayer,” the famously witty but often downright scary '90s series that had more impact on the risk-taking of future TV writers than it had on the ratings at the time.

“Buffy” is rumored to come back — or a version of it, anyway — likely with another Slayer carrying the heavy weight of being a teen girl tasked with the job of protecting the world from the world of demons and vampires. "Charmed" is coming back as well, with the "Jane the Virgin" team promising strongly feminist narratives. And this time, the world is clearly a more welcoming place for a genre that was once shoved off to the midnight movies and B slot at the drive-in theaters.

Why now? Surely the ability to run more R-rated content on streaming platforms plays a role, but it's hard to deny that horror is also the genre that best fits our times of anxiety and dread. Every day the news is a constant churn of real life horrors, as culture wars accelerate and the rise of right wing authoritarianism leaves most people in a state of unease about the futures of their families and the country. It's an environment that can make the mundane pleasures of a silly sitcom or murder-of-the-week procedural seem too ridiculous to be enjoyed.

While it might seem odd for people who are already terrified to choose to relax watching more horror, there's a perverse logic to it. In a world that is chaotic and senseless, a genre like horror — which relishes the uncanny and often rejects the pressure for tidy or comforting narratives — is the only thing that makes sense. Horror gets you. Horror makes you feel less alone in your sense that the world around you is teeming with evil and out to get you.

"When it feels like someone has ripped out your intestines already, it's hard to get too worked up at the sight of some monster doing it to someone else," Meredith Clark wrote in Glamour, about how she became invested in horror after being dumped by her fiancé right before her wedding in 2016. That's an apt description of how huge swaths of the country feels right now. Watching some ghoul threaten to kill children and destroy a town is pretty scary, but hey, it's not watching Donald Trump try to reignite fascism at one of his rallies airing on Fox News.

The genre is also recreating an art that was nearly lost: the art of practical effects. As the 1999 adaptation of "The Haunting of Hill House" made clear, there's something about CGI effects — which can add so much to adventure stories and superhero flicks — that just drains a horror scene of its impact. Unsurprisingly, then, the actors in both Netflix adaptations of "The Haunting of Hill House" and "Chilling Adventures of Sabrina" emphasized that their shows were relying heavily, and often almost entirely, on old-fashioned practical special effects, which use make-up and wires, and that thrilled audiences so long ago in the 20th century.

Maybe it's just a trend that will die in a few years. But there's real reason to believe this horror TV show thing has legs. After all, horror is a genre that has persisted in book publishing for decades, demonstrating not just that audiences never grow tired of being scared but that serialized horror has an audience, if the creators know what they're doing.