WTF are we doing in Afghanistan?

Spending $45 billion a year, and Eric Prince wants every dime 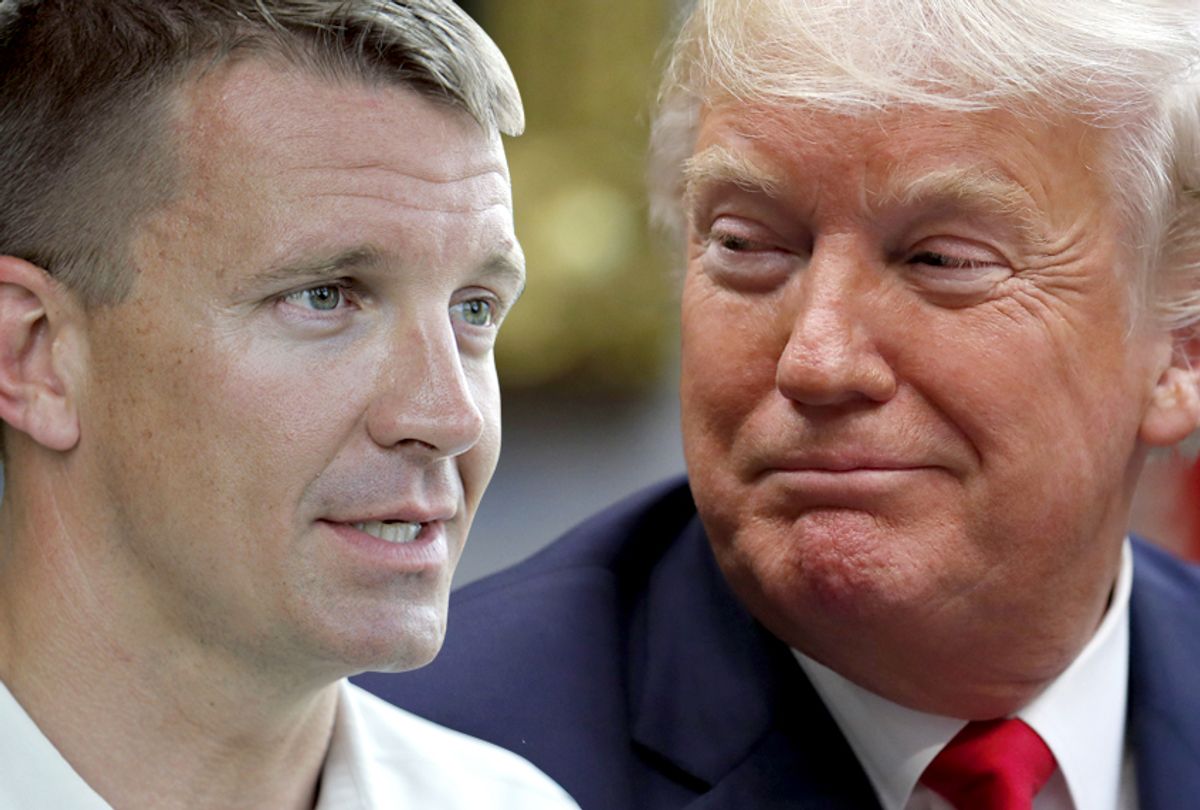 Did you read what happened earlier this week in Afghanistan? A suicide bomber set himself off in Nangarhar Province, east of Jalalabad on Tuesday and killed 14 people at an election rally. At least 43 were injured in the attack, according to the New York Times.

Last month, a suicide bomber attacked a peaceful protest in Nangarhar Province, killing 68 and wounding 165 others.

The next day, another suicide bomber attacked a wrestling gym in Afghanistan’s capital, Kabul, killing 30, including journalists and aid workers, and injuring 91 more.

In June, a suicide bomber killed 13 people and injured 25 more outside one of the government ministries in Kabul. This happened a week after another suicide attack in Kabul, which killed 14 Muslim clerics who had gathered to issue a fatwa against suicide bombings, according to The Independent.

Not to worry. It’s Erik Prince, former Blackwater chief and brother of Betsy Devos, to the rescue!

Yes, according to the New York Times, Prince, the king of private contractors during the Iraq war, has returned to the battlefield to save our 17 year war in Afghanistan for us!

How is he going to do this? Well, for starters, he’s got his eyeballs firmly fixed on the tax dollars we’re currently spending in Afghanistan.

According to the Senate Subcommittee on Federal Spending Oversight,  we are spending at least $45 billion a year in Afghanistan. About one billion of that amount is spent for “economic aid” to Afghanistan, and $5 billion is being spent on “Afghan forces,” according to the report. That leaves $13 billion we’re currently spending on U.S. military forces in Afghanistan, and $26 billion on “logistical support.” It’s that $39 billion Erik Prince has his eyes on.

Just between you and me, that’s a shitload of money.

What he wants to do is draw down our military forces until all we’ve got over there are 2,500 special operations troops for “counterterrorism missions” according to the Times. Prince would replace the 15,000 American military forces currently serving in Afghanistan with about 6,000 of his private contractors. The Times reports that his contractors would provide “skeletal structure support,” whatever the hell that is, as well as “training for Afghan forces.”

Prince proposes that his force of 6,000 private contractors “would be supported by air through a fleet of contracted aircraft flown by joint teams of Afghans and contractors,” according to the Times.  Huh? Just who those “contracted aircraft” would belong to, Erik is keeping to himself. But here’s a hint: we’re not in the habit of loaning out our combat aircraft to the kind of rent-a-private-pilots Prince is proposing.

We’ve got 15,000 troops over there being supported by what amounts to unlimited Air Force and if need be Naval air support, as well as American Army attack helicopters and Blackhawks. And our soldiers are serving in support of Afghan forces in fighting the Taliban, which means that they are providing intelligence, air support and logistical support to the Afghan army (remember the $26 billion for “logistical support?” Some of that supports the Afghans).

And with all of that support, all of those American troops, and those tens of billions of dollars being spent, “Afghan security forces are dying at a record number of 30 to 40 a day,” according to the Times. Not to mention the hundreds of civilians being killed by seemingly endless suicide bomb attacks.

Erik Prince’s genius plan would take the $13 billion we’re spending to pay for 15,000 American soldiers and use it to pay for 6,000 private contractors. And he would take the $26 billion being used for logistical support for 15,000 American and Afghan forces, and use it to support his 6,000 contractors and whatever he decides to throw the Afghan army’s way.

Gee, do you see any room for profit there?

Of course, Prince is pitching his plan to the White House as a way to save money. He knows all about saving money fighting wars, this guy. According to the Times, his firm Blackwater was given “hundreds of millions” of dollars in contracts during the war in Iraq before his firm was blacklisted after some of his contractors shot a bunch of civilians in Baghdad in 2007.

Let’s see . . . the war in Iraq started in 2003. That means in four years, he was able to glom hundreds of billions of our tax dollars in private contracts over there before he was fired. The man is really, really good at spending money, that much is clear.

The report from the Senate Subcommittee on Federal Spending Oversight states that total cost for the war we’ve been fighting in Afghanistan is somewhere “between $841 billion” — a figure Brown University’s Cost of Wars Project says is vastly underestimated — “to approximately $2 trillion.”

That’s the kind of money Prince has his eye on down the road. We’ve spent 17 years over there. For all of his talk of ending American military government in Afghanistan, he knows we’re not going anywhere. He knows we’re going to keep on throwing money at the problem, because that’s what America does.

That’s the “blood” of the “blood and treasure,” politicians say we have spent in Afghanistan for 17 years.

What Erik Prince wants to do is replace the blood of American soldiers with the blood of his private contractors. He wants to take the treasure out of our tax-paying pockets and put it in his capitalistic profit-making pocket.

That has never been done in this country. We don’t hire mercenary armies and send them overseas to fight our wars for us. We send our Army and our Navy and our Air Force and our Marines overseas if we think something is important enough to fight a war for.

If we change our minds, and calculate that something isn’t worth spending our “blood and treasure” on, we bring our soldiers and sailors and airmen and marines home.