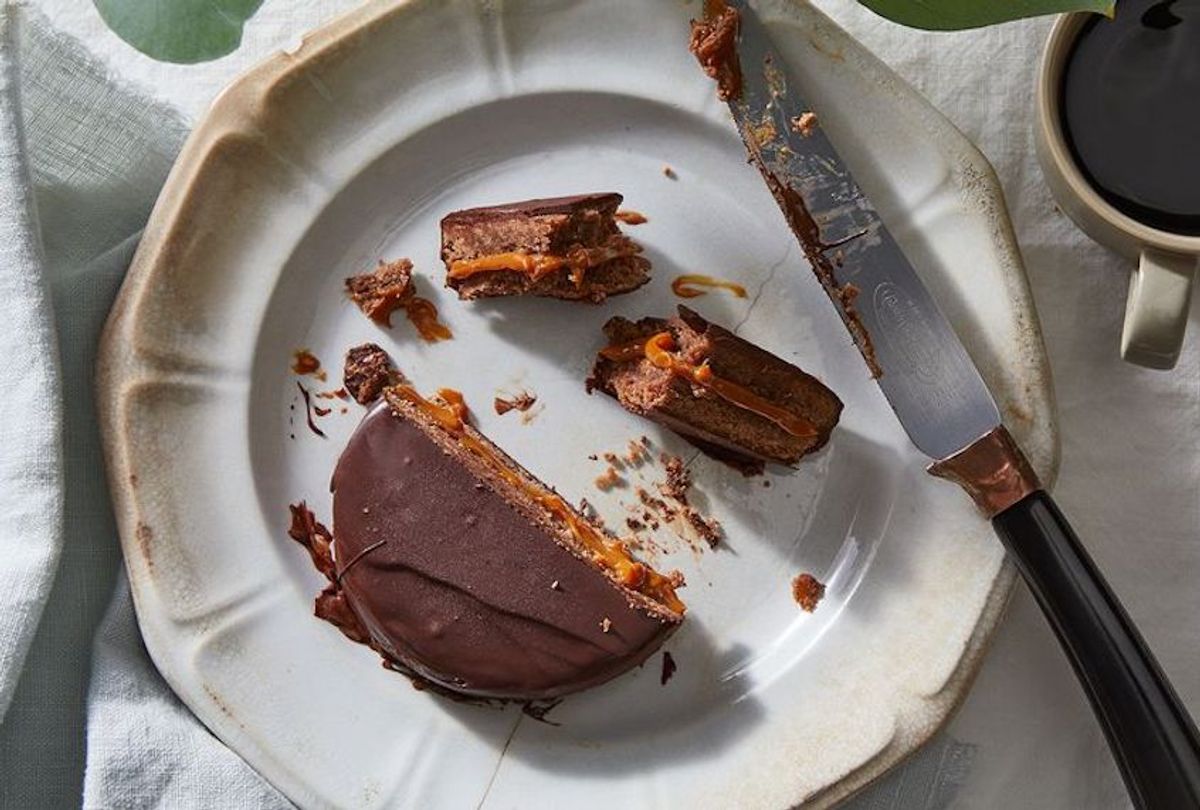 When my mom first came to visit me in New York, I took it upon myself to show her as much of the city as we could cram in a week. We went to Ellis Island and the Met, down the High Line and up 30 Rock, hitting every spot I knew was a must-see for NYC first-timers. Nevertheless, I insisted that one of our destinations in her whirlwind tourist adventure of the city should be Jackson Heights. It was, perhaps, not as flashy as the recently opened Chelsea Market or as “in” as Smorgasburg (both of which we also managed to fit in), but it was there that I’d found a bakery that carried what long had felt like a childhood delicacy: a Havanna-brand dark chocolate–covered alfajor.

That image — two Colombians at a Uruguayan bakery in Queens, eating an Argentine baked good — embodied everything I’d always felt about the mystical alfajor. It was a treat that transported me elsewhere and suggested a vast culinary world outside of my own. It was only when I looked into the history of the humble alfajor that I realized just how cosmopolitan my favorite cookie was.

Its story begins in eighth-century Iberia, in what is now Spain (Andalucía, in particular). As a medieval Muslim territory conquered by Moorish Muslim armies from North Africa, Andalucía found its culture as well as its culinary inclinations heavily influenced by Arabic customs for the next handful of centuries. It makes sense then, that the word “alfajor” comes from the Arabic al-hasú (“filled”).

Such a storied history lives on in the alfajor, which, in its original incarnation — still produced today in the city of Medina-Sidonia in southern Spain — feels very much like a Middle Eastern treat. A recipe dating back all the way to 1786 bears this out. Originally published in the "Recetario Práctico de Guisados y Dulces: Medina Sidonia," the list of ingredients (honey, cinnamon, toasted almonds, sesame seeds, hazelnuts) all but reads like it belongs alongside recipes for the likes of baklava and halvah. Modern-day recipes have changed little from that 18th-century account.

For those of us who grew up with its Latin American counterpart, the Medina Sidonia alfajor (also sometimes called alajú) is near unrecognizable. The finger-shaped dessert consists of a biscuit dough made with sugar, water, breadcrumbs, hazelnuts, almonds, honey and spices that's then coated with simple syrup and icing sugar. Originally a holiday treat, they remain today a year-round classic of Andalusian cuisine.

These alfajores made the trek to the New World in the 16th century where they worked their way down south and eventually landed in Mar del Plata. That’s where the alfajor got a decidedly sweet upgrade. It exchanged its honey-soaked goodness for some dulce de leche and dark chocolate. As I’ve since learned while trying to master these little guys at home, the key to the alfajores of my youth is the hint of cocoa that characterizes its cookie base.

Many of the homemade versions of alfajor I’ve encountered over the years aim for a crumbly, cornstarch-based texture. The result are light cookies that melt in your mouth, staying out of the way of the dulce de leche inside them. These are the kind of alfajores I’ve seen sold in Brooklyn food markets and Astoria coffee shops. They’re also the kind that my mother-in-law lovingly made and sent our way last year. But these delicate variations always felt a bit removed from what I loved most about my once-in-a-blue-moon childhood snack.

Because they were manufactured to travel great distances — to be sold across the world in Miami and then eaten in, say, Bogotá, say — Mar del Plata alfajores were much sturdier. There was nothing delicate about them. When unwrapped they were small chocolatey bricks that beckoned you to bite into them. And in them I’ve always seen a version of myself.

Growing up in Bogotá, all three of us — my siblings and I — had a sweet tooth. For this reason, my mother had gotten into the habit of locking away our snacks with a key. She kept them stowed away in a bulky wooden buffet table that took up most of the space in our dining room. This seemed a modern kind of torture. It irked us that she didn’t trust us, though given our ravenous appetites, I’m now inclined to forgive her. She knew that had she left bags of chips, cookies, or brownies out in the kitchen, they’d be gone in the blink of an eye. And while I treasured every one of those afternoon treats, there was none I coveted more than the alfajor.

For there to be an alfajor in the house meant that my mom had traveled (usually to Miami where she knew a bakery that carried the Havana brand we all loved) and brought them back for us. That also meant there was a limited stash. Each one was a special delicacy I yearned for and all too quickly devoured. I loved nothing more than to bite into one, breaking up the sandwich cookies that revealed dulce de leche in the middle, and then savoring the dark chocolate that covered the whole lot, disposing quickly of the gold foil wrap that encased it. In a way they always felt Wonka-like in their packaging, all the more delicious for their rarity.

It was only a matter of time before my mom and her Argentine boyfriend (the reason we all got hooked on these delights in the first place) began to make them at home, slowly mastering the art of getting the cookies to crumble just right, the dulce de leche to keep its gooey consistency, and the overall effect to be as enticing as those gold-foiled wrapped ones they used to buy in Florida.

Over the years I’ve had plenty of variations. By the time I left for college, Colombian manufacturers had begun making alfajores, while in Vancouver and New York, artisanal versions had popped up as well. There are those with powdered sugar instead of dark chocolate, wrapped in silver, not in gold (and thus, always in my biased mind, second-rate). Others that substitute the dulce de leche for membrillo (fruit jam). And even those that forgo dipping the sandwich cookie altogether and use grated coconut to decorate the outer rim. Some are bite-size (don’t get me started — those are too small) and others are so rich that my husband insists he can only ever have one. The only thing these many lesser versions of alfajores have in common is that I can never go past one without buying it. A search for that original Florida cookie, I suppose.

I’m not alone in my utter adoration of this sandwiched cookie. According to Jorge D’Agostini, the author of "Alfajor Argentino, Historia de un Ícono (The Argentine Alfajor: History of an Icon)," Argentina consumes on average 6 million alfajores per day. And that doesn’t include the ones made in bakeries — just those sold in grocery stores! Yet here in the United States the cookie remains a hidden gem, the kind you have to seek out and only occasionally find on menus or in bodegas.

It took years for my mom and I to find an adequate recipe that didn’t result in those softer, crumblier cookies. This perfect recipe came, of course, with a more elaborate and painstaking baking process. When she told me I’d have to set aside a full day to make these, I laughed, thinking she was exaggerating, imagining that I would somehow be able to streamline the process in a way she hadn’t yet figured out.

You’d think I’d learned by now not to second-guess my mom’s baking prowess, but I quickly proved myself wrong. And maybe that’s the point of this mystical cookie. There’s a way in which alfajores demand and reward your patience. You can’t force perfection; you can’t rush nostalgia.

Now that I’ve mastered them at home, I may not need to travel all the way to Jackson Heights to buy them, or wait patiently for my mom to unlock one from the dining room’s buffet table. Moreover, the daylong adventure of making them from scratch, in and of itself, feels like its own reward somehow, the sweet taste of a long-lost past on a plate.