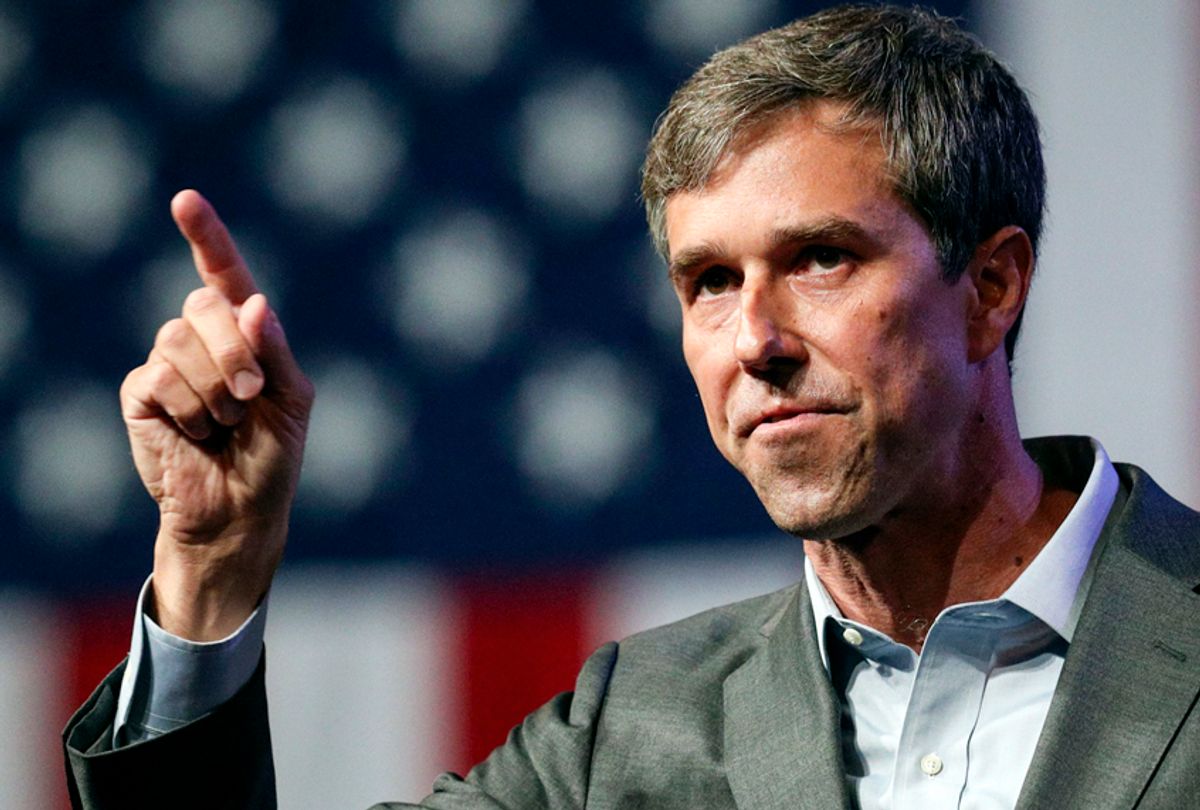 For left-leaning political junkies, the idea of Texas turning blue evokes the myth of Tantalus. A Democrat winning statewide election always feels like it's just out of reach, but every time party organizers grasp for it, the possibility recedes from their fingers. Mary Beth Rogers at least knows that it's not completely impossible.

As the campaign manager for the late Gov. Ann Richards, Rogers helmed the last successful Democratic gubernatorial campaign in the state -- which was admittedly in 1990. After Wendy Davis lost her run for governor in 2014, Rogers published a 2016 book, "Turning Texas Blue: What It Will Take to Break the GOP Grip on America's Reddest State," arguing that while Democrats face many difficult obstacles in the Lone Star State, it is not impossible to win there — and maybe even win a high-profile statewide election sometime soon.

That time could be now. With Rep. Beto O'Rourke, a Democratic congressman from El Paso, drawing huge crowds and raising money nationwide in his surprising run for the Senate seat currently held by Republican Ted Cruz, the question of whether Texas can turn blue has captured national interest again. O'Rourke has crept within a few points of Cruz in credible polls, and just this week the Cook Political Report reclassified the Texas race from "lean Republican" to "toss-up." Even national Republicans have begun to discuss the possibility of losing a seat that once looked like a sure thing. Rogers sat down with Salon to offer her thoughts on this tantalizing possibility.

Democrats last won a statewide race in 1994, but every couple of years or so, there's a reopening of the idea that Texas could go blue. What keeps this hope alive?

Because there's still Democrats who have hope and don't want to give up! So much has happened in the intervening years, where it has been hopeless. The demographics are beginning to shift now. I think that's given Democrats new hope.

Democrats have done better in the general election, but here we have off-year elections where there's often a million-vote drop from the general. We're going to see what a Democrat like Beto [O'Rourke] is able to produce and how he can counter that.

Last time there was a statewide race that had this kind of chatter was when Wendy Davis ran for governor in 2014. Some polling showed her 10 points behind, but she ended up losing by 20.

I think most of the polls that showed her that close were internal polls that were released, and that was part of the overall hype in that campaign. I don't think she was ever really close, almost from the get-go. She generated so much excitement, particularly among women, and then the balloon just slowly lost air and it continued during the entire race.

A lot of it was overhyped. She was a glamorous candidate. She drew a lot of national attention, but the campaign never was able to meet the expectations for a number of reasons, and I wrote about a lot of that in the book.

The campaign made huge mistakes. It was still going to be very improbable that she could have won that election, but in my opinion she could have done much better than a 20-point loss.

We're looking at a very similar situation in a lot of ways with Beto O'Rourke versus Ted Cruz. He's a glamorous candidate. He's young. He's good-looking. He's getting a lot of national attention. A recent Reuters poll said he's two points ahead of Cruz. What are your thoughts on that campaign? Are your hopes high?

Hopes are always high, but I think they are more justified in 2018 than they were in 2014, and a lot of it has to do with the candidate himself and the kind of campaign he's running.

Beto is the most charismatic Democrat who's been on the scene since Ann Richards, and that makes a huge difference. If you've got the right candidate with the right message and the right kind of campaign, then you're going to increase your chances enormously.

The question is, will it be enough to get him over the top? We'll see. I think the polls are going to be all over the place. From what I've seen on some of the internal polls in local areas, Beto's doing very well, and Cruz is just so uniformly disliked among Republicans.

That's an advantage that Wendy Davis did not have in 2014. Greg Abbott, who defeated her as governor, is kind of ... how shall I say this kindly? He's almost a nonentity. He doesn't draw a lot of emotion either way, but Cruz does. Cruz really does.

Beto has personality and charisma, but what else do you think is helping him?

One of my key arguments in the book I wrote was that a Democrat has to run a whole state campaign if you want to win. As you know, from Texarkana to El Paso and north and south and east and west, the state is big and extensive. Beto has visited every one of the 254 counties in Texas. Ann Richards was the last candidate who did that, the last Democrat who did that. That makes a difference. If you can shave one, two, three, four percentage points off the total Republican vote in some areas, it helps you begin to build the numbers to win statewide.

Beto has drawn amazing crowds in areas where Democrats have not gone for actually 20 years. My sense is that will help him add up to a bigger vote total. I think he's making tremendous inroads into the Anglo vote in Texas. ["Anglo" is a common term in Texas used to describe non-Hispanic white people.] I think he's pulling some moderate Republican votes, particularly moderate suburban women. For all the hype that Wendy Davis had, she did not generate the excitement among middle-class suburban women voters that Beto is doing.

I know some of those women, being from Texas, and I never heard any of them say one word about Wendy Davis. I can say that at least one I know of mentioned Beto and how she likes him.

You see that in a scattering of yard signs. My daughter lives out in Frisco, in Collin County, which is the most Republican-voting county in the state of Texas. I could not believe that there were Beto yard signs out in that area.

That brings up another point. You're seeing some movement in some of these traditional Republican suburbs. One of the reasons Ann Richards lost in 1994 was this huge suburban sweep, when the suburban counties around Dallas, around Houston, around Austin, turned out a huge Republican vote. That's beginning to shift.

In Texas, there's the suburban, the rural and the urban vote. The cities in Texas vote for Democrats: Houston, Dallas, Austin, El Paso, San Antonio. Why can they not overwhelm the rural and suburban votes?

It depends on turnout, and it depends on off-year election turnout. Democrats have to continue to increase their percentages in those cities and they're getting close to doing that.

The question is, can the Democrats increase that base voter turnout? I'm talking about raw numbers here, as well as percentages. Can they do that in those cities? And in small cities — I'm talking about Waco and Temple and other cities that are not in the top five — they still have the potential for a larger Democratic vote.

We'll see, but what Beto is doing that Wendy Davis was not able to do is he's increasing his percentage of the vote among Anglos, and that's what a Democrat has to do. Another big question for me and for a lot of people is: Can he increase the turnout among Latino voters in the state?

Texas is one of only five states in the country where non-Hispanic white people are a minority, fewer than 50 percent of the population. Why isn't that translating to more wins for Democrats?

There are a number of factors that go into that. A lot of it has to do with turnout: the people who turn out in these off-year elections, versus the whole voting population.

We've got a very diverse Latino population in the state. You've got families that have been here five, six generations. You've got newcomers. You've got people from countries other than Mexico. It's a tremendously young population. Democrats have had a hard time figuring out how to motivate, how to increase those numbers. I think Beto has a really good opportunity to do that.

Again, I go back to Ted Cruz, just because he's so generally disliked. He is disliked among Hispanics, too.

If you were going to give three basic pieces of advice to Democrats in Texas, what would they be?

Vote, vote, vote. Bring your neighbor to vote and your sister and your brother. I'm seeing a lot of neighbor-to-neighbor stuff going on. I think that's important, but I think it is all about turnout. This is going to be a turnout election.