Radha Agrawal on why Americans don't have any close friends

"I think that we're not creating community center opportunities fast enough that are relevant for today," she says 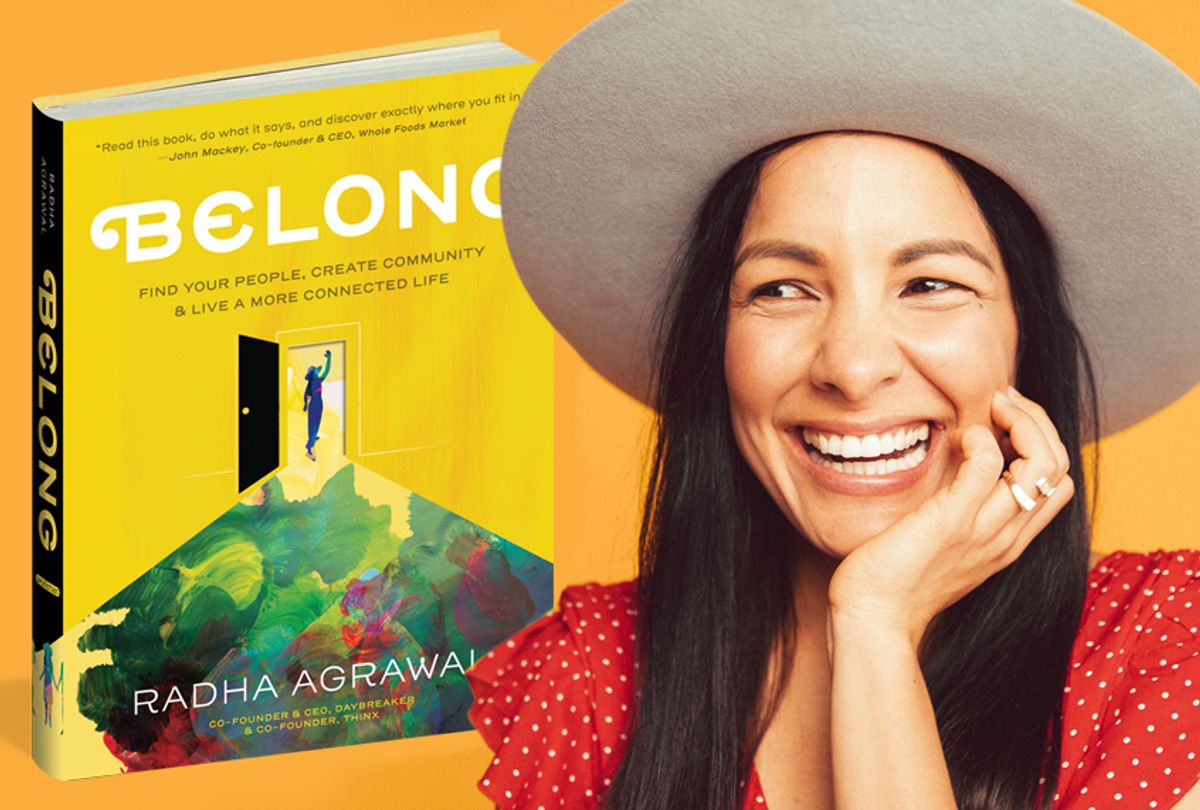 At age 30, Radha Agrawal looked at herself in the mirror as she was getting ready to go out on a snowy night in New York City and noticed something: she didn't look happy.

"Other than with my identical twin sister, Miki, and a small group of friends whom I lived but rarely saw because they were scattered around the globe, I didn't feel a strong sense of belonging anywhere," she writes in her debut book "BELONG: Find Your People, Create Community, and Live a More Connected Life." "I found myself stuck at the same sports bar every Saturday with friends who talked about stuff I didn't care about, and I frequently drank until I blacked out."

It was this epiphany that eventually led Agrawal to look more closely at how she was spending her time—and with whom.  Eventually, this self-inquisition led to her starting Daybreaker — a morning dance party ("Wake up and dance," it advertises) that happens in 25 cities around the world. Salon spoke with Argawal to learn more about how the importance of community, and how a sense of belonging might be what Americans yearn for the most.

Nicole Karlis: This is your first book, congratulations. Can you tell me more about the ideation of the book and what the writing process was like for you?

Radha Agrawal: I wrote a book to answer the question: "How the heck do I find my people?" I think we live in a time right now that we're sort of more isolated and alone than ever before. One in four Americans have zero friends to confide in and share their deeper selves with and it's become our biggest epidemic in this country. I really believe it's the underlying problem for all suffering on this planet — like gun violence, terrorism, our president and everything that's sort of dark and negative ladders down to our lack of belonging.

The book is very visual — you use sketches to emphasize your thoughts, which I really liked. I'm curious if that was part of your original idea for it.

Yeah, absolutely. I've been an artist, an illustrator all my life. I have about 20 exercises in the book as you probably saw and the idea for the exercise is that you're getting dirty with a book, you're participating in the book, you're not just passively taking it in, but you're actively participating in your future. That's really how we built a breaker. The cornerstone of belonging is participation, is leaning in and saying "yes!" with a  joyful exclamation point. I really wanted the reader to be able to close the book and have a wonderful blueprint and friend in me holding their hand, taking them through this book and giving them confidence to know and the courage to know, "wow.... if she can do it, I can do it." Anyone can do it.

Religion is not as popular these days — especially among millennials — and yet historically, that is where people have found their sense of belonging. Do you think that these special types of friendships that you encourage in the book are replacing religion?

Absolutely, and not fast enough right now, which is why the loneliness epidemic is so high and people are also addicted to the slot machines in their pockets, which is their phones. I think that we're not creating community center opportunities fast enough that are relevant for today. Millennials don't want to go to churches anymore because of the decor, the ambiance, what's being taught. I think the experience of church mixed in with the religious teaching is no longer kind of aligned with many millennials.

That said, a lot of churches are doing it right. Like Hillsong (in San Francisco) and a few other sort of church groups have done a good job of bringing a much more cool, fun, atmosphere to the church environment. I actually went to one during my research for my book and I was shocked at how fun [it was]. I cried during it. I found myself putting my hands in the sky. I'm not Christian, but I was praying to Jesus.

I have attended lots of gatherings, and over the course of my last three weeks I've been on book tour around the nation. It's been a wild case study to learn what people are struggling with. Two days ago I was in Phoenix, Arizona, for a book reading. There were about 60 people at the bookstore for my book reading, but I didn't do a book reading. I threw it out the window and instead I ended up doing a community building workshop for everybody. I had everybody share what they're struggling with and across the board there are people from ages 25 to 85 and mostly it was people in their 50s, 60s, and 70s who are really feeling loneliness. What I learned from them is that, A, there’s nowhere to go. B, there's an invisibility to our elder community that they feel as they're aging and then men are the most ashamed to admit they don't belong. Mostly it's men who are struggling and really unhappy, but they don't know how [to communicate it], because society has taught them to grow a pair. Society has taught them to man up.

The other piece of it that I thought was really fascinating was go to different cities. I learned from Phoenix that there's a transient nature to the city, to the urban sprawl. People lived really far away from each other, so it's hard to create community. The fastest growing cities in America are also can be the loneliest cities too because people are moving there but not having any community.

Freedom and independence are cornerstones of American culture. There is a strong emphasis on individuality. People who live in countries where they're not as encouraged to move and leave their families may look at America and be like, "oh, you can follow your dreams," but at the same time, one is sacrificing one's roots, and community. Do you agree?

Yeah, that's exactly the kind of a give and take in the double-edge sword, right? On one hand the freedom is so tantalizing. You think, "wow, I can travel the world," but then you're making surface friends. What I always say is, find the best of both worlds, find a place and be able to root somewhere. Really pick somewhere and root somewhere. America celebrates our rugged individualism, going against the grain, being our own person at the cost of community, right? But you can actually be both. To really kind of live the best of both worlds, you have to really pick somewhere, commit to that place for at least a few years.

My loneliest period of my life was in my 20s when I moved 11 times. I felt totally unmoored and sort of unstable in terms of my friendships.

It's like working out any muscle, right? Like going to the gym takes kind of just putting your shoes on and going, which is 90% of the difficulty, because it's much easier to just Netflix and chill. It's the same way with social media, we have to flex the muscle of turning our phones off sort of, to remove Facebook from our phones, and to say to ourselves at dinner we're not going to turn on our phones.

The problem is app developers are so sophisticated. They figured out how to make us addicted, which is why I call them slot machines in our pockets. We are addicted to our phones in the same way that we're addicted to opioids.

Do you think that America's politically polarized environment could be an effect of a lack of community and a lack of belonging?

For me, I went from feeling competitive to feeling deeply inspired by my friend group when I felt that they were supporting me, too. It's such a difference. I talk about "the mean girls of your mind." Our minds are so dynamic. You have this dynamic sort of cafeteria inside of our mind and everyday there's food fights happening in it, between the mean girls and soul sisters, and like just where do we sit and where do we go, who do we talk to and who we hang out with. Much of that has to do with our sense of belonging.

Why do you think it is so hard for people these days to make new friends? Why is there so much fear?

A couple things. I have this page in my book that I don't know if you've read, but it says fear and empathy are best friends. It's a big idea, and it's about how so often our fear and our kindness, our empathy, our big hearts actually prevent us from pursuing communities because in many ways, the same [thing] that feels like what makes us a beautiful, loving human being is also what makes us the most fearful too.

I can just fire off 20 text messages and I'm in many ways both desensitized to it but also much more sensitive to it. Something doesn't get lost on email. If I said Nicole I'm busy right now, I'll call you later. You might read it like, Nicole, I'm busy. Don't bother me. There's just so many ways of having stuff get lost in translation and we're so much more sensitive for it, but our fear comes from the fact that we're much more easily rejected now, right? In many ways our hearts are so big and because fear is right there, because rejection is so easy to get to, fear becomes easy to feel as well, right?