By standing in solidarity, Sandy Koufax and Don Drysdale did something groundbreaking for baseball 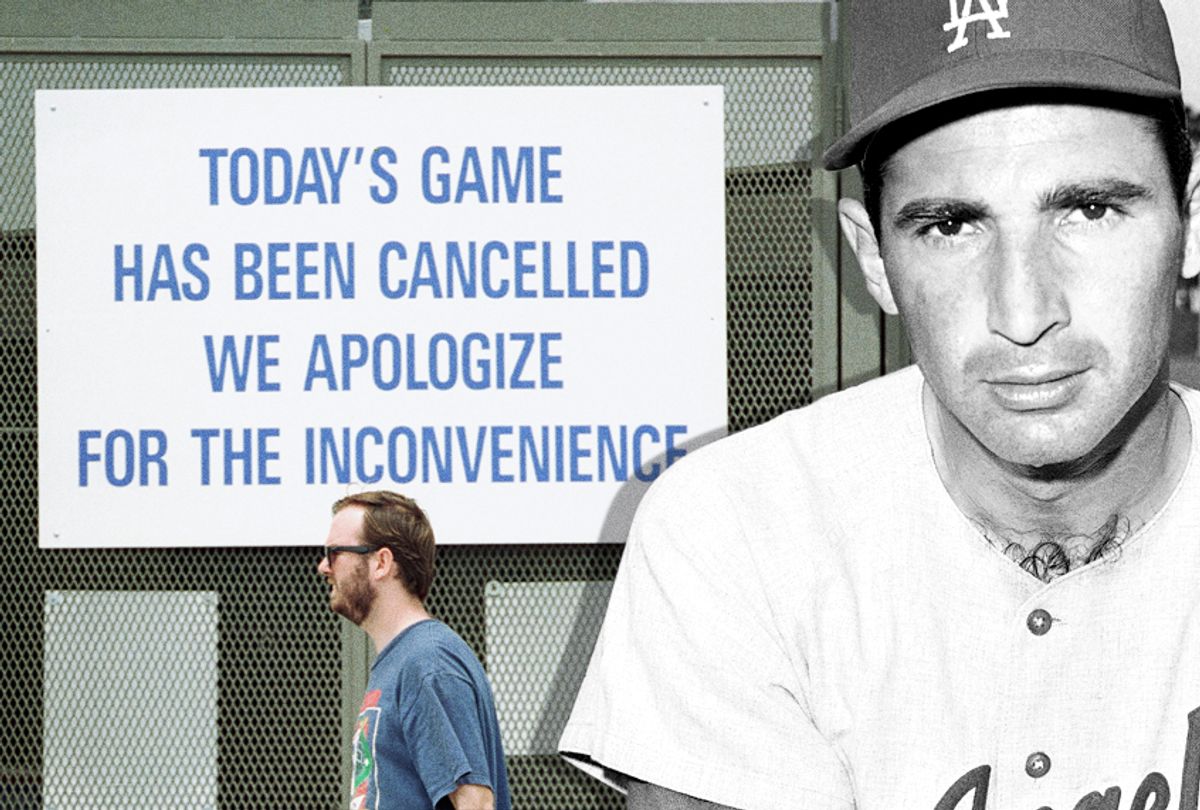 Sandy Koufax; A sign telling fans that the Atlanta Braves-Houston Astros is canceled on four of the MLB strike in 1994. (AP/Salon)
--

Excerpted from Lincoln A. Mitchell, "Baseball Goes West: The Dodgers, the Giants, and the Shaping of the Major Leagues." Copyright © 2018 by The Kent State University Press. Used by permission.

The greatest star of the Dodgers during those first years in Los Angeles was Sandy Koufax, but the Dodgers' identity was not forged around Koufax alone. Instead, the Dodgers in those years were defined by the tandem of superstar pitchers who led their team. Both were tall men who threw hard and were intense competitors. Both began their Dodger career in Brooklyn. There were differences too. Don Drysdale was known for pitching inside and was never afraid to use a little chin music against an opposing pitcher hitter. Koufax rarely did that. Drysdale was a great right handed pitcher. Koufax was even better, but was left-handed. Both were single and enjoyed spending time with beautiful women.

The two, however, came from different backgrounds. Drysdale was a gentile from the San Fernando Valley in L.A. who had the blond hair and conventional good looks. Koufax was Jewish and from Brooklyn, also handsome, but in the way that might appeal to a thoughtful grad student rather than somebody hanging out at the beach in Southern California. Both Koufax and Drysdale appeared in small roles in movies and television shows during the Dodgers’ first years in L.A. At the time, their friendship despite their different backgrounds, with an emphasis on their different religious background, received a great deal of attention in the media.

Jane Leavy, one of Koufax’s biographers, described the relationship between the two pitching stars:

“(in) the words of Drysdale’s second wife, Anne Meyers Drysdale, ‘they shared an unbelievable moment in time.’ With Drysdale what you saw was what you got: Big D, California large and California handsome. Koufax was 3D-his essence elusive…They were perfect foils if not perfect friends. ‘They were so different’ she said. ‘That’s why they were so good together.’”

In addition to being great pitchers and part of the celebrity scene in Southern California in the early 1960s, Koufax and Drysdale also played a very important role in the history of baseball’s labor-management relations and participated in one of the earliest cases of collective action by ballplayers in the modern era. In the mid-1960s, there was no free agency, no arbitration and the reserve clause was in full force. This meant that once a player signed with a team, unless he was traded or released, the team had complete control over his contract. In this environment contract negotiations were relatively one-sided as the players had little leverage they could use to get more money from the owners.

The one significant tool the players had in this setting was the holdout. A player could simply refuse to come to spring training in the beginning of the season. This ploy, however, could only be used by valuable and well known players because if a backup infielder or even a starter coming off a bad year held out during spring training, the team could simply ignore the hold out leaving the player no choice but to sign the contract offered to him or to stop playing professional baseball. It is not, therefore, surprising that most holdouts were brief and this tactic was rarely used by players who were not stars.

These salaries had not been arrived at through collective bargaining or even an honest negotiation, but simply by the owners deciding on a number and the players eventually accepting it, in some cases after what amounted to some very minor haggling. Drysdale and Koufax had a new idea and because of the extraordinary value they brought to their team, and their unique circumstances, being two high profile stars, who also happened to be good friends, on the same team, were able to implement their strategy.

The Dodgers were the defending World Champions when spring training of 1966 began. Koufax and Drysdale were the best players on the team. Without their two pitching aces the Dodgers were not only a middle of the pack team, but they would have no stars as marketable as their top two pitchers. They had other good players, but speedster shortstop Maury Wills, their only other recognizable star, was not as well known or marketable as either Drysdale or Koufax.

Koufax and Drysdale realized that their value to the Dodgers was greater together than individually This is a pretty fundamental notion for workers when they negotiate, but Koufax and Drysdale were in an unusual industry, and an unusual position in that industry, so their decisions to hold out together was groundbreaking for baseball. The two pitchers asked for a total of one million dollars over the course of three a three year contract. The money was to be divided evenly between the two pitchers.

In 1966, these were stark demands. It would have meant almost doubling both Koufax and Drysdale’s salaries as well as guaranteeing them three more years. Multi-year contracts were unusual in that era. The two pitchers proposed sharing the money equally, so they would have both been the highest paid player in the game at $167,000 per year. This would have been an enormous boon for Drysdale who, as good as he was, was not equal to Koufax.

The reactions to the holdout varied. Baseball management was outraged. The owners had spent decades working to ensure the reserve clause stayed in place and that any hint of collective bargaining was quickly squashed. The owners’ sentiments were best expressed in an article penned by Buzzie Bavasi, who was the Dodger general manager at the time of the holdout.

“To tell the truth, I wasn't too successful in the famous Koufax-Drysdale double holdout in 1966. I mean, when the smoke had cleared they stood together on the battlefield with $235,000 between them, and I stood there with a blood-stained cashbox. Well, they had a gimmick and it worked; I'm not denying it. They said that one wouldn't sign unless the other signed. Since one of the two was the greatest pitcher I've ever seen (and possibly the greatest anybody has ever seen), the gimmick worked. But be sure to stick around for the fun the next time somebody tries that gimmick. I don't care if the whole infield comes in as a package; the next year the whole infield will be wondering what it is doing playing for the Nankai Hawks.”

Leavy put the holdout in a broader perspective and argues that Koufax and Drysdale had a very valid and important point to make: “In challenging Walter O’Malley, the power behind the commissioner’s throne, they were taking on not just the Dodgers but the Institution of Baseball. No one else could have done it; no one else had their standing or the irrefutable attendance figures to assert their value. The Dodgers acknowledged they drew an additional ten thousand fans every time Koufax started and three thousand when Drysdale pitched.”

The holdout lasted most of spring training. During the holdout, Koufax and Drysdale both announced plans to star in a Hollywood movie presciently called “The Warning Shot.” The holdout ended March 30th, just before the start of the season, when Koufax signed for $130,000 and Drysdale for $110,000.

The holdout was only possible because of the unusual role Drysdale and Koufax played on the Dodgers, but it would not have been hard for other players on other teams to replicate it. Mays and McCovey or Harmon Killebrew and Tony Oliva on the Minnesota Twins were also great players without whom their teams would not be very good. No other players ended up following the Koufax and Drysdale template, but it was an early salvo in the labor strife and massive changes to player-owner relations that were a big part of MLB in the 15 years following the holdout. The holdout may, in fact, be unrelated to the decision of the players to form the Major League Players Association and hire noted labor lawyer Marvin Miller as their representative during that spring training, but it is likely that the lesson from the Koufax-Drysdale holdout helped make it clear to the players that they needed to work together and hire a tough negotiator like Miller.

Lincoln A. Mitchell is a scholar and writer in New York City, and the author of Baseball Goes West: The Dodgers, The Giants, and the Shaping of the Major Leagues (The Kent State University Press, November 2018).